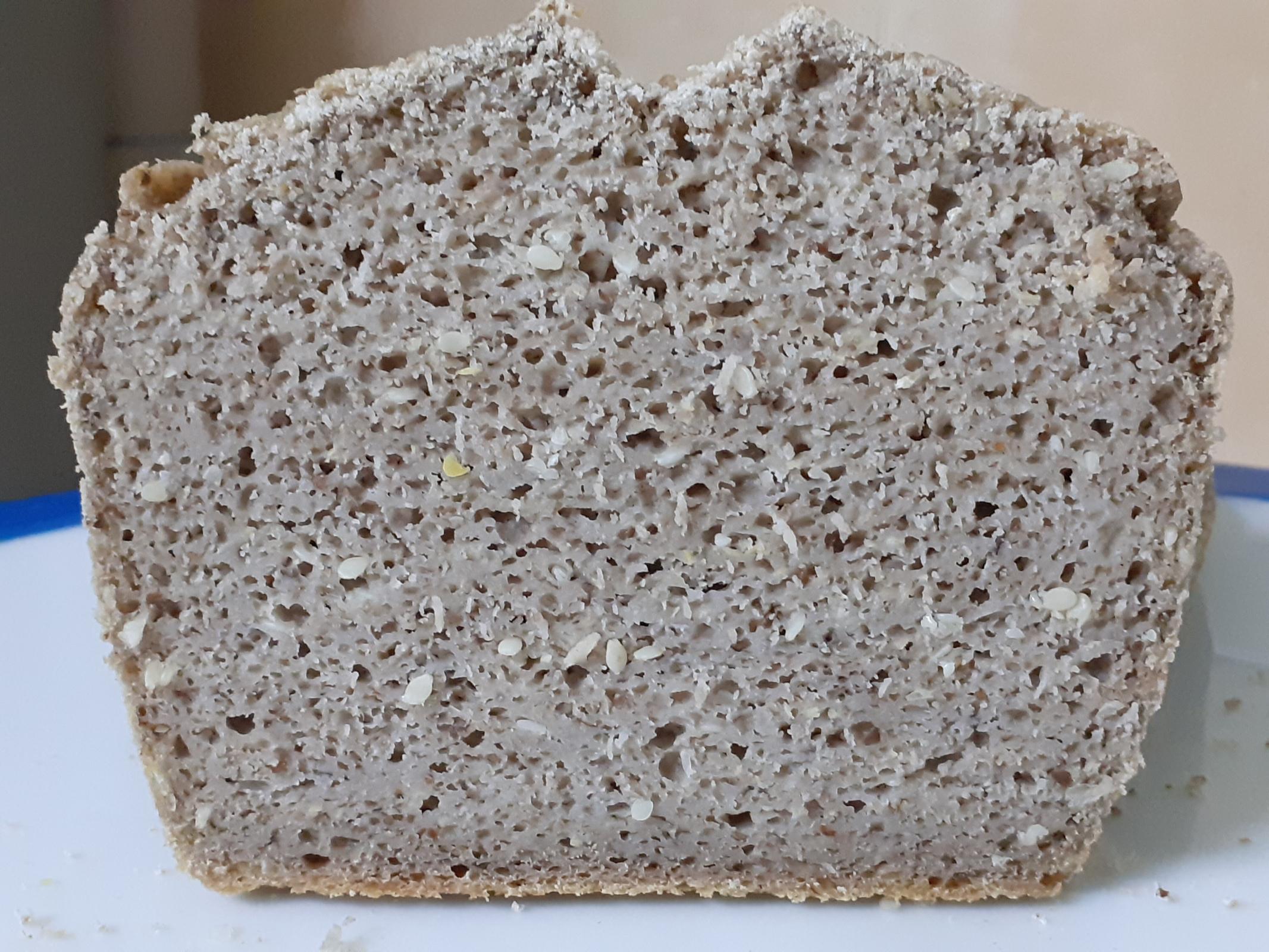 [Excuse my shoddy camera work and my bread knife tears more than slices; this photo doesn't do it justice and it wasn't too long out of the oven when sliced. This buckwheat bread has a close rye like crumb but a much softer texture and when toasted the flavour is very much enhanced with a nice crunch on the outside but a soft interior. Goes very well with something like an emmental.]

Step One: The Soaker

The groats should be softened and the mixture will have a gel like consistency. Either in a food processor, or with a hand held blender, blend the groats into a thick paste. Dissolve 8g of salt in 50ml/g of water, add it to the paste and thoroughly mix. Cover and leave to ferment for 24 hours. By which time it will be well risen and bubbly.

Add in anything you wish. Doesn't have to be measured. This is a batter bread. Fold in till fully incorporated and pour out into a prepared loaf pan.

Allow to fully cool and to really appreciate this tasty bread I recommend toasting.

There are many naturally fermented buckwheat recipes based on this method and i've done this many times using the method they all follow. However for this bake I was inspired by this recipe on YouTube but with a few minor changes of my own.

Interesting that a ferment starts so easily.  What temperature?

But works very well at normal room temperature too! What causes this very easy spontaneous ferment? Is it the soaking or the property of buckwheat? Soaking buckwheat groats does produce the gel like substance which isn't present when baking with buckwheat flour. This makes a lovely textured bread that holds itself together. Buckwheat flour, on the other hand, is dry. But does the soaking also give the spontaneous ferment a boost? As a non gluten batter bread we can rely on the quick off the mark ferment but perhaps a wheat bread needs something more stable and stronger. Whatever the case i've done this plenty of times, not giving too much thought about the temperature, and it's never failed. Rather fascinating really.

Have you ever toasted a portion of the buckwheat groats? I especially like the flavor of toasted buckwheat.

While this needs raw untoasted organic buckwheat groats to work I have used a portion of toasted buckwheat before. While it does lend flavour one still gets this from toasting the bread itself. I can see it being useful if one doesn't wish to toast the bread and still get that special toasted buckwheat taste but since I almost always toast my bread it's not necessary. But by all means swapping out a percentage still works. Not too much though as the gel is also needed for this recipe.

This bread is so interesting and simple. There are buckwheat groats available locally... so many tempting projects on TFL.

I am in the middle of a bake using (a small portion of) buckwheat as well... I used a scald, diastatic malt, and hot fermentation over 20 hours. Really interesting results. I'll blog it up this weekend.

Then learning about this buckwheat bread is so interesting because of the stark contrast. It's also interesting to see the huge difference between baking with buckwheat flour vs. whole buckwheat groats. Making buckwheat bread from flour just doesn't have the same texture even after adding all the binders. And who wants all the binders when one can have fewer ingredients, all wholesome and end up with a better tasting and textured bread. Always have fun making this.

So that gel from the groats is a key binding factor, I guess.

I'm sure I just read about this concept somewhere.

Ah... nixtamalization! An article about it said that when you nixtamalize, you create a gel in the corn. If you keep rinsing the nixtamalized corn to make hominy, you wash away that gel. But the gel helps with making dough from corn.

The gel from the groats themselves is a far better binder than using the flour and adding in binders. Even with all the binders one can in a buckwheat bread made from flour it still has a dry texture. Using the gel is world's apart.

Just added it to my bake list. I have a family member who is gluten free by necessity, and she might enjoy this.

Have you frozen the bread at all? Curious how it holds up, might be just fine.

No need to make or keep a starter either. No need for many different types of ingredients. Simple and effective. I don't need to eat gluten free but enjoy making this bread appreciating it for what it is.

As for freezing it and how it holds up I don't know. Can't see why not. You can always freeze a slice as a trial.

It takes 1.5 - 2 days but it's very little hands on time. I'm sure your family member, and indeed all the family, will enjoy it.

Looks great Abe!  This is the bread that turned me on to buckwheat.  It is so good toasted.

Another good thing about this method is only adding enough water for the groats to soak, absorb and gel up without the need to drain. Takes away one step working up to the correct hydration.

Buckwheat is transformed when toasted.