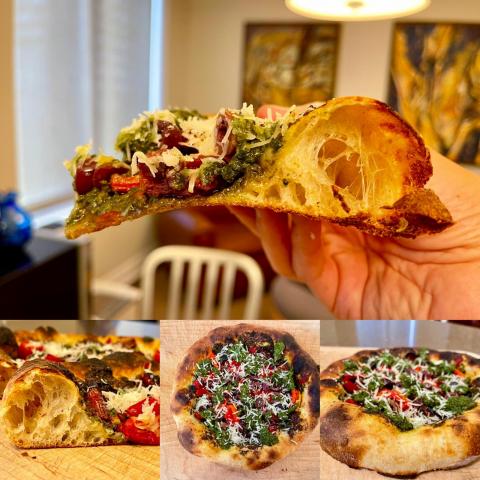 Does one need a pizza oven to make pizza at home?  I don’t think so although I’d love to have one 😉  I’ve been trying to fine tune my processes for making the dough and finally baking the pizza.  I’m still using the recipe from the TFL community bake but I’ll post it below for those interested along with my small alterations.

One thing about baking in my oven with a cast iron is that I now bake on the roasting setting which activates the upper elements of the oven.  I’ve also gradually moved my baking steel upwards in the oven so that the actual cast iron skillet is on the equivalent of the second highest rack.  This has the effect of baking really hot and fast.  My first pizza I didn’t check for doneness and it went just a bit too far after 6 minutes at 550ºF.  The second pizza I checked and gave it an extra 30 secs after I turned it in the oven after 3 minutes of baking, so it had a total of only 3.5 minutes and yet was totally baked, again maybe just a bit too long.  Anyhow, I’m pretty happy with my pizzas but I’m always fine tuning things to see if I can bake them better.  I now also brush water on the cornicione immediately before the pizza goes into the oven, this has really helped with getting “leopard spots” on the cornicione so that’s one tip I can share.

For these two individual pizzas I made a home made pesto with basil, walnuts, Grana Padano and a combination of EVOO and toasted walnut oil.  The other toppings were a simple combination of roasted red peppers, sliced kalamata olives and sun dried tomatoes.  After the pizza comes out of the oven, extra pesto and Grana Padano was added.  Delicious.  If you haven’t made your own sourdough pizza dough yet you really need to give it a go.

Sourdough version you may have to adjust the amount of levain. At 3.5% PreFerment Flour (PFF) 2-4 day retard should work.

(1) In your mixer bowl(or by hand) dissolve the Starter or yeast in all of the Final Dough Water except the HOLD OUT Water.  (Add diastatic malt too)

(11) Stretch the balls into your desired size skins (see video below), top and bake at 550F (as high as your oven will go) Until the crust is browned and the cheese has melted. Spin the pie at least once to avoid burning due to oven hot spots. I have included a link to a skin stretching tutorial. Watch this video, more than a few times then go through the motions in your head. If you can see it in your mind's eye, you too can be a home oven pizzaiolo!

Make sure the non oily side of the dough is down in the skillet to avoid a burnt bottom.

Bake for 3 minutes at 550ºF then rotate and bake for another 3 minutes.  As mentioned earlier, watch the crust as I have found the second pizza often bakes faster than the first. 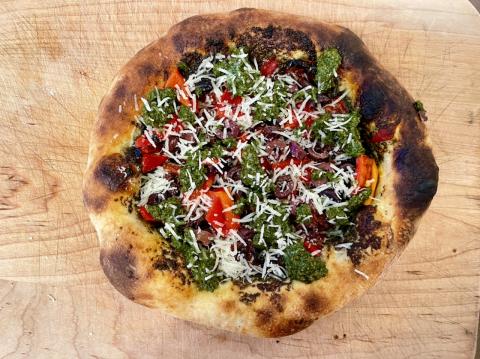 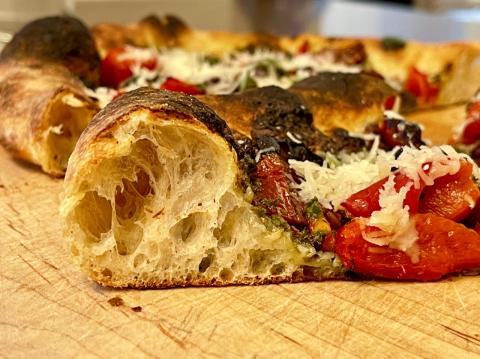 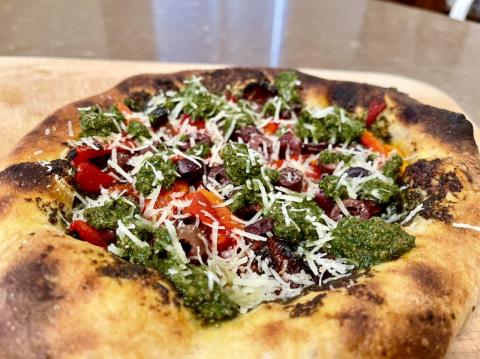 Crazy coincidence. Just made a sourdough pesto pizza (topped with smoked salmon added after, artichokes, grated parmesan, mushrooms, green pepper) a week or so ago.

I just used my insulated baking sheet preheated to 500. Then slipped the dough on parchment onto the preheated pan. Prob 15 mins. Tasted amazing but it was a rectangle without huge puffy borders.

The amazing thing was I got a very late start making it but by playing with hot water and nested mixing bowls, I made a levain and then the dough in a few hours.

Your pesto pizza sounds delicious David, I like the idea of the smoked salmon, I will have to steal that 😉. If we ever want to have friends over for pizza, I’ll borrow your rectangular pizza idea too except I would dress it on the parchment on my cookie sheet (no lip) and then slide it right onto the baking steel.

I like to make pizza dough planning to have 2-4 days of cold retard so weekend bulk with two weekday bakes.

For sure a multiday cold bulk is ideal... for those of you disiciplined planners!

FYI Kristapson's on Queen east of Carlaw has good smoked salmon and also sells packets of pieces (vs filets) at discount. Worked well for my pizza.

Oh yes I know Kristapson’s, our first house was in Leslieville so we used to get smoked salmon there.  We are no longer close but their smoked salmon is the best in the city for sure.  I didn’t know that they had packets of pieces though, that is great for when smoked salmon is being added to a dish.

What a font of useful pizza info in this post (water on the cornicione!)- especially about where to put the baking steel. Although I do worry about cracking my pizza stone if it is too close to the grill.

How much yeast into your recipe - the usual 7g sachet?

I assume you're using a peel to load and unload the pizza? And getting them onto the peel - do you have a trick? That is my downfall, I have a known problem with dropping fully laden pizzas!

Hey Jon, no commercial yeast was harmed in the making of this pizza.  The dough is sourdough levain raised.  I make my pizzas individual sized in a 9-10" cast iron skillet so it is no problem to load and unload.

Learned a new word as well as a good tip related to it!  ;-). These look gorgeous and exactly how I like them--puffy and airy on the edge and thin but stable at the center.  Yum!

You have good taste then Leigh, I like them the same way.