Working with a new whole wheat flour now, this is a local organic stone ground flour that I’m hoping will taste great. I’m also hoping that the thinner crust I achieved recently by not baking in my dutch oven wasn’t a fluke so I’m baking open in my oven with steam using the Sylvia towel and a cast iron skillet again.

I’m also experimenting again with a very wet autolyse of just the whole wheat and using a stiff levain.  The idea I have in my mind is that if the whole grain component of the flour is autolysed with all the water, except the hold back water, the bran can hydrate more quickly.

The levain is prepared the night before and fermented at a cool room temperature.  Not surprisingly, this lower hydration levain ferments more slowly than a 100% hydration levain and also holds its peak longer.

In the morning the whole wheat flour is mixed with the water and allowed to hydrate for 1 hour.  After 1 hour, the levain and salt and added.  Once the levain is well combined the bread flour is added and mixed until there is no dry flour.  Rest for 10-15 mins.  Reassess the dough and decide if it requires more water, at this point I added the hold back water and allowed the dough to fully absorb that water using Rubaud kneading.  After 15-20 mins of rest 400 slap and folds were done to achieve moderate gluten development.

Proofing box set to 82ºF.  Rest 15 mins and a bench letterfold was completed.  Aliquot jars were prepared, one for rise and one for pH.  The pH at this stage was 5.39.

The dough was allowed to complete bulk fermentation at 82ºF.  Bulk ended when the dough reached a rise of 40% with a pH of 4.52.  It was shaped, no pre-shaping was done since the final coil fold acted as the pre-shape, and placed in a banneton.  It was allowed to proof at room temperature until it had a rise of 70% and a pH of 4.16.  Cold retard was then started at 3ºC.

Although I know other bakers who will target a pH of 3.9 for all doughs as the start of cold retard, it doesn’t completely make sense to me.  Doughs with more whole grain will buffer the acid produced more than dough with less whole grain.  Dough with more whole grains also tend to have less gluten.  If one were to target lower pH regardless of the type of flours used in the dough one would run the risk of over fermentation and more gluten degradation.  I believe that doughs with really strong gluten can tolerate a lower pH than ones with weaker gluten.  However, I’ll need to do much more baking to prove this to myself. 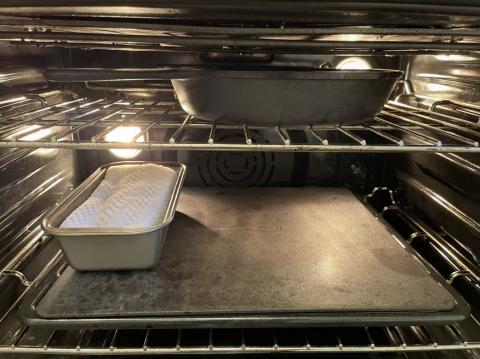 The next morning the oven is pre-heated to 500ºF with the cast iron skillet on a rack well above the baking steel.  After 30 mins of pre-heating, the pan with the Sylvia towel is filled with boiling water and placed on the baking steel next to where the bread will bake.  When the oven is ready, another cup of water is boiled, the dough is flipped out of the banneton, excess rice flour is brushed off, the dough is scored and water is brushed onto the dough.  The dough is transferred on the baking steel and finally 250 mL of boiling water is poured into the cast iron skillet.  After a minute or two, the oven temperature is dropped to 450ºF.  20 minutes into the bake the oven is vented by removing both the pan and the skillet.  The bread continues to bake at 450ºF for ten minutes.  The bread is then removed so that a rack can be placed one position over the baking steel and the bread is then placed on this rack.  The temperature is then dropped to 420ºF and the bread is then baked for another 10 minutes rotating half way through.

Another benefit that I see at the end of the bake is that the bottom crust isn’t nearly as darkly baked as it would be when baked in a dutch oven.  I won’t know about the crust thinness until the dough is sliced, but so far the advantages of baking without the dutch oven seem to be worth the extra effort of baking using my open steaming method. 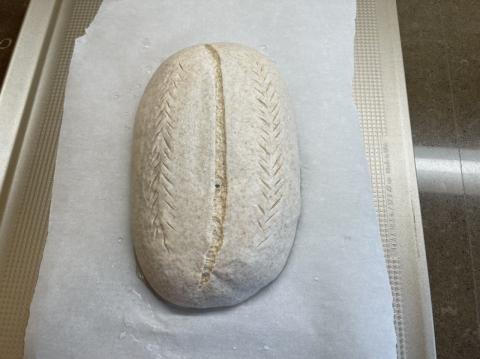 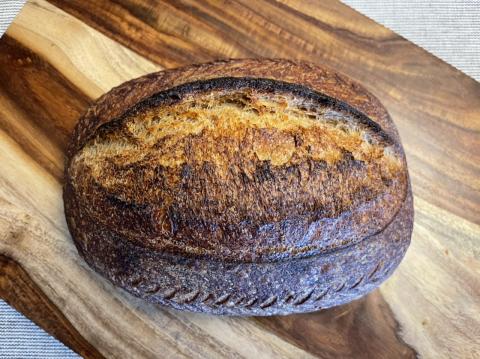 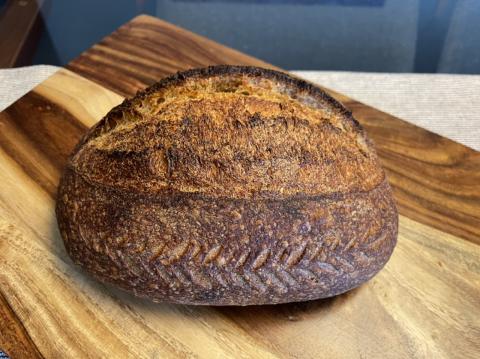 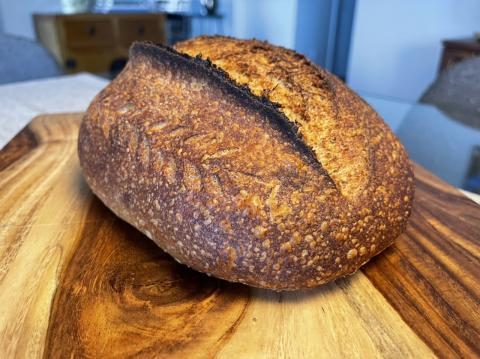 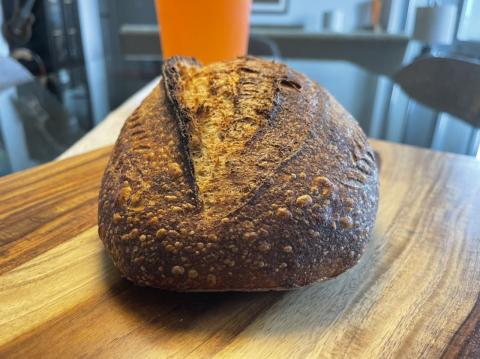 Thank you Danni, I’m quite pleased with this bake as well.

That loaf looks fantastic, nice rise for the whole wheat content and great looking crust.  I'm looking forward to your review on crust thickness with this technique and the taste test.

ll I’m pretty happy with this bake. It think I could ferment a bit further with this recipe go down another 0.1 in pH without too much fear of ver proofing. The crust is thinner with an open bake again so I may continue to bake this way to confirm this. The bread has a great wheat flavour and nice tang. This’ll make great sandwiches tonight for dinner. 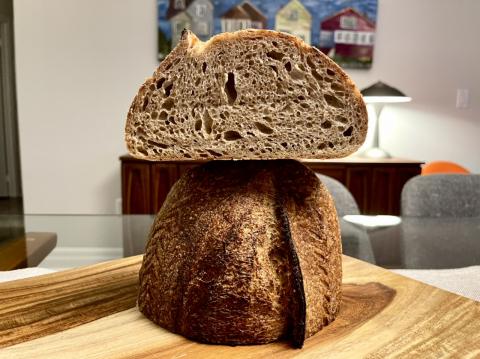 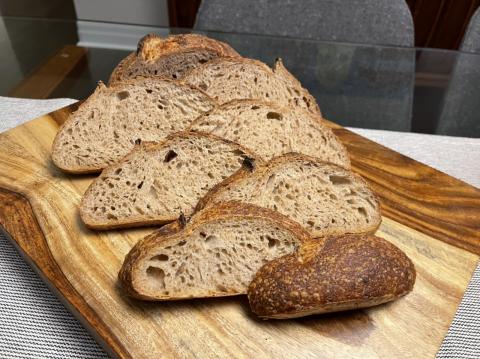 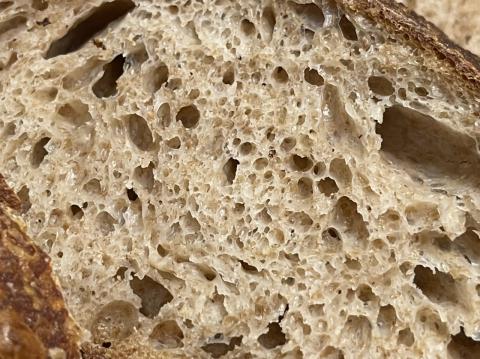 Tasty looking loaf Benny.  The profile looks nice and tall, and as you mentioned, the crumb looks perfect for sandwiches!  Some very nice blistering on the crust, so it looks like cooking in the open oven was a success!

Thank you Troy, yes I think the extra effort of steaming the oven seems worth it.  The end result of having a thinner crust despite 60% whole wheat makes me happy.  I’ll need to do another open bake at a more usual 25-30% whole grain to compare since that is what I have baked most often.  My sense is that the more whole grain you use you do get a thicker crust, not sure that is true but that is what I’ve thought based on my bakes.  It’s also nice to make a time lapse video so I can actually see my bread rise and the bloom and ear form.  Based on what I see in the time lapse I think I need to extend the steam bake to longer than 20 mins.  You can see that the bloom was continuing to open even right at the end of the 20 mins of baking.  I think I’ll add more water to the skillet and give the steam portion 25 mins next time as the 20 mins may have limited the bloom a bit.

Thank you Gavin, I hoping to improve upon my whole wheat breads, I’m not sure that I want to bake only 100% whole grain loaves, but it would be nice to bake mostly whole grains and be happy with the loaves.

Lovely loaf, seems you can even pull it off without the Dutch oven.

Funny you should mention tang. My taste buds get confused and I sometimes wonder whether the tang comes from the WW or the starter.

Thank you kindly Jon, my steam set up with slight modification works well for hearth loaves as it does for baguettes.  Sometimes I think that everything I know about baking bread I learned from baking baguettes 😝

I suspect the tang is partly from the stiff starter which tends to favour acetic acid production and then also the greater proportion of whole wheat which buffers the acid and allows more to be made before the pH drops.

Fantastic crust and crumb especially for such a high % of WW.
I envy your patience for experimentation with PH and other elements.  I never use a Dutch oven and I get great results with my oven setup.
Happy baking!

Thank you very much Ian.  Are you able to tell me how you set up your oven for steaming?  I don’t recall you talking about it and I’d love to know.

Mine is pretty simple.  I have a heavy duty rimmed sheet pan on the bottom shelf, baking stone next shelf up.  I then have another baking stone on top shelf.  I pour 1 cup of water in preheated oven into the pan and let it go until it evaporates itself.  I never take it out.  This seems to work for me. One of these days I’ll try the towels but to be honest this method seems to create enough steam as I airways get a nice crust and color.

I probably wouldn’t try anything else when what you have works and is simple.  The towel and skillet combination works so I can’t be bothered to try anything else given the potential for ruining a bake or two to test.