You might recall that I made homemade miso that completed its 1 year fermentation in August.  I finally got around to using it in a sourdough bread.  I’ve made miso sourdough with various inclusions in the past but hadn’t made one in some time now. 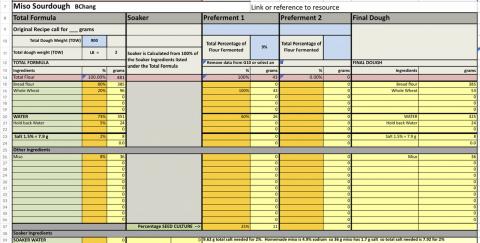 In the morning dissolve miso, salt and levain in water.  Then add flours and mix to shaggy mass.

sets of coil folds every 30 mins when dough relaxes x 3-4 as needed.

When the pH reached 4.52 and the rise was 50% the dough was shaped and placed in a banneton.

The dough was left to ferment further until a pH of 4.24 and a rise of 90% was achieved.  The dough was then placed in a 3ºC refrigerator overnight.

The next morning the oven was preheated to 500ºF with a cast iron skillet and baking steel in place.

My plan was to try a 5 minute score.  I’ve outlined what that is In this post. And have included a time lapse video in that post.

The dough was placed without scoring on parchment and placed into the oven without steam.  The temperature was dropped to 450ºF and the dough was baked for 5 mins.  After 5 minutes the dough was removed from the oven and scored.  The dough was placed back into the oven and boiling water was added to a pan with a Sylvia towel in it and into the cast iron skillet.  It was baked with steam at 450ºF for 20 mins.  The oven was then vented and the steaming pan and skillet were removed.  The loaf was then baked for another 20 mins at 425% rotating to ensure an even bake.

On reflection of this bake, the bloom was less than stellar and I believe that two or three things might have improved this.  Shorten the 5 mins to 4 mins of initial baking without steam.  Score more deeply.  Peel back the scored crust just a bit so that it doesn’t immediately reattach to the sticky exposed dough.

Another thing I don’t like is the off colour of the crust.  Despite brushing off as much of the rice flour as possible, much of it stuck and caused as off colour to the crust that I’m not fond of. 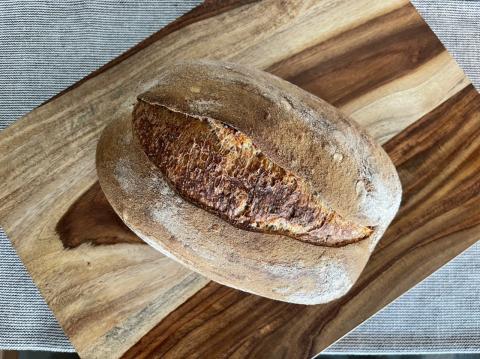 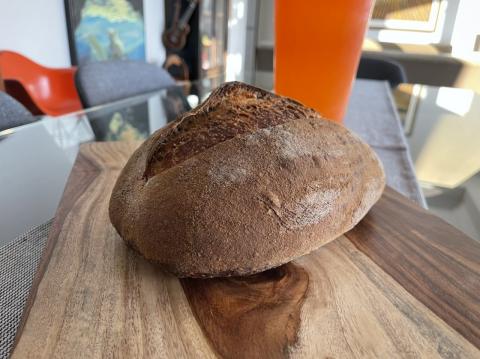 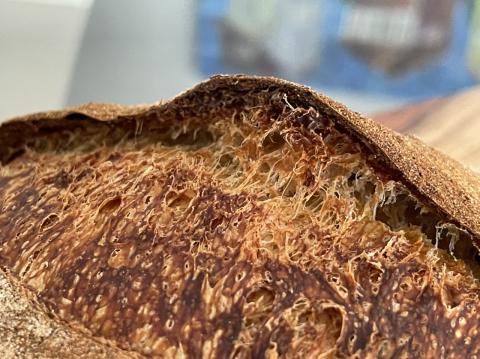 Interesting experiment. I read your earlier comment regarding the 5 minute score and wondered how it would work. I don't have any issues scoring so I'm not inclinded to try, but I like that you are willing to try the various inovations that come along. I think you should be wary of a deep score as they can fall back in on themselves before the oven spring can take over.

Thanks Gavin I’m usually game to try things at least once.

I do love the umami of miso in sourdough. I think that it needs to be more than 7.5% if you want to taste it in the bread so I’ll increase it to 9-10% next time. Nonetheless this is a delicious loaf that went well with out Thai red curry shrimp last night. Happy with the even crumb.
One interesting thing I noticed was the the crust was noticeably thinner with this baking method vs a Dutch oven.  I’ll need to try this again to know that this wasn’t a fluke. I’d be interested to hear from others if they have had thinner crusts when baking without a Dutch oven. 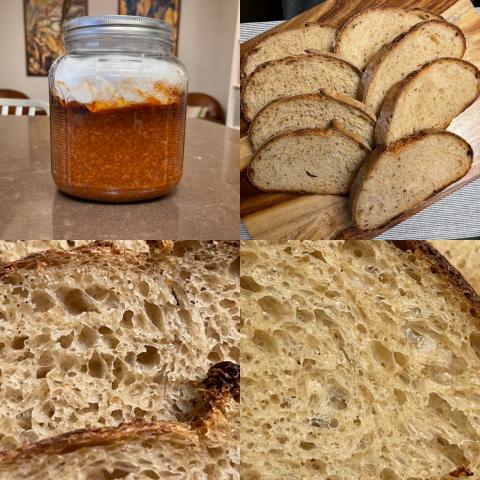 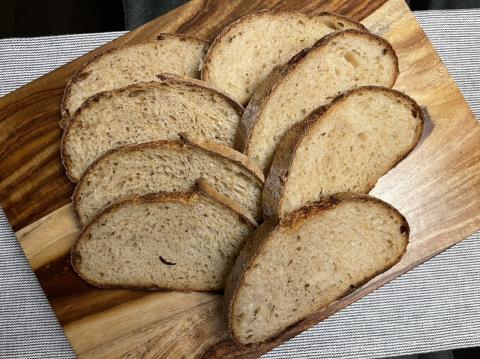 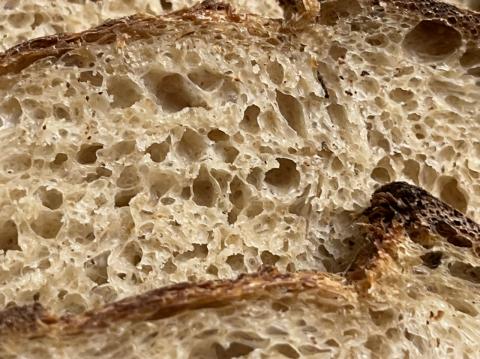 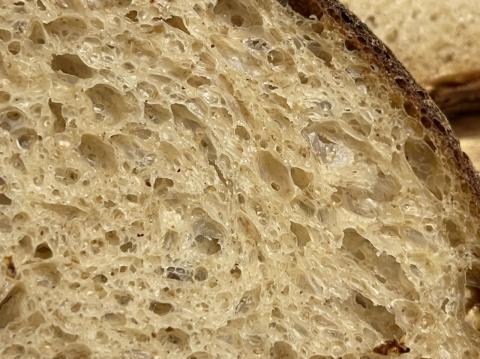 Can just imagine this one had great flavour! I need to try a miso bread.

When it comes to the 5 minute score I must admit to still playing a lot with it and my jury is still out on the method.

The perceived benefit for me is that it is easier to score like this than to score a 'room temperature' dough that hasn't been cold retarded. At 5 minutes into a bake, particularly if the dough was misted prior to closing the dutch oven there seems to be a 'skin' on the dough that is an advantage to scoring. Perhaps this is only a benefit to baking in a dutch oven, I wonder?

Having said that, I messed the last one up horribly and made a real hash of the scoring with the dough snagging on my blade. It isn't so easy scoring, even if just the lid of the dutch oven, when it is hot. But surprisingly, even with a jagged horrible score the method was quite forgiving and I got good oven spring.

I do see a nice spring and vertical lift with this method though, wonder if it is because I'm always using the dutch oven?

I’m glad to hear about your experience with this method Jon.  The posts I’ve read on Instagram said that for baking in a dutch oven to bake without a lid for the 5 minutes before scoring.  I haven’t tried this method only because I didn’t want to run the risk of burning myself while scoring the dough inside the dutch oven.  I also didn’t want to remove the dough from the dutch oven to more safely score the dough and run the risk of damaging the delicate expanding dough.

I wonder if I should have misted the dough lightly prior to placing it into the oven for the 5 minutes.  I really didn’t like the appearance of the crust with the rice flour throwing off the colour.  However, I worried that misting the dough might have countered the creation of the initial thin crust that would prevent the spreading of the dough.  Anyhow, I think I will only try this again if I’m worried about an overproofed dough.