This is a modified bake that I last did in the winter and wanted to do again now that I have a good pH meter.  40% whole Kamut, 40% whole spelt and 20% bread flour, so lots of whole grain. 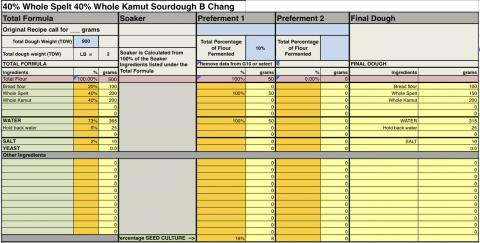 The next morning about 9.5 hours later the levain had peaked at > 3.5 x rise and was added to the dough.  Once mixed well with Rubaud kneading it was left for 15 mins.  The hold back water was gradually added and once completely incorporated 15 mins rest was done again followed by 400 slap and folds to ensure good gluten development.  pH was 5.49.

After 30 mins rest a bench letterfold was done.  At this point aliquot jars were prepared, one for measuring rise and the other to measure pH.

Four sets of coil folds were done at 30 mins intervals each time the dough had relaxed.  By the end of the fourth and final coil fold the pH was 5.13 and the rise was already 20%.  What I found with this dough was that the pH drops were less than expected for the degree of rise attained.  A few possible reasons for this.  First spelt is very extensible, so that for the same degree of fermentation a dough that has a large percentage of spelt may rise more.  This was also the reason I didn’t do a lamination because of spelt’s poor gluten quality.  Second, as you know whole grains are a better buffer of acid than low extraction flours so for the same degree of fermentation a dough with more whole grains will have a higher pH. 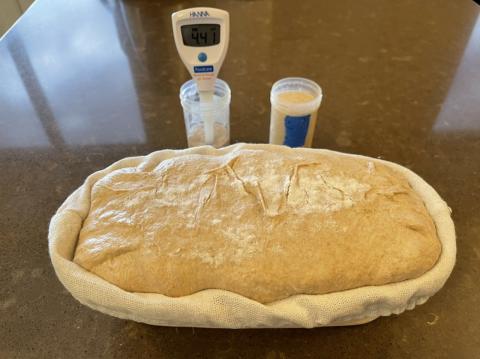 "Higher" oh and a near 100% aliquot make me curious as to how the final bread will look!

Yes I’m fearful of an overproofed loaf, I’ve had my share of those while trying to find the outer limits of fermentation.  That being said, having the pH data and seeing that the pH isn’t low at all, gives me some hope that this one will be good.  🤞

My fears of over fermentation were realized with this bake.  Despite the relatively high pH of 4.2 at time of baking the bread definitely was over fermented.  I unfortunately sliced the loaf up before realizing that I hadn’t photographed the loaf.  Just trust me when I say it spread and was flattish.  The crumb looks fine for an 80% whole grain.  I see no evidence of broken gluten strands nor separation of the crust from the crumb both of which would show gluten degradation.  So the dough didn’t get too acidic causing the proteolytic enzymes to breakdown the gluten.  So why would the dough have spread during baking.

When I flipped the dough out of the banneton it looked great.  There was very little spreading even as I scored it. 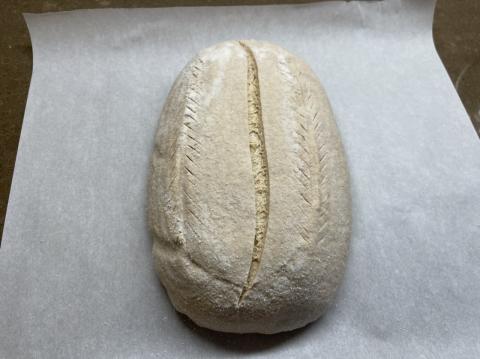 I would say this was over fermented because the gluten was no longer strong enough to hold in the gases as they expanded during baking.  As this happens the structure of the dough is lost and it will spread and not have good oven spring.  I suppose it will be much like an over fermented commercial yeast loaf where it isn’t the acid that causes gluten degradation, it is just that the pressure of the gases expanding that cannot be held in because the dough started out with the gluten almost stretched to its limits.  This is much like a balloon that pops because it gets overinflated.

So the learning point in this for me is that I need to heed both the alquot jar rise and pH data.  If the pH gets low first heed that and end fermentation.  If the aliquot rise gets too high before the pH drops then heed that.  Going by a previous bake of this recipe, I think I only allow 80% rise in the aliquot jar so that would be a good end to fermentation. 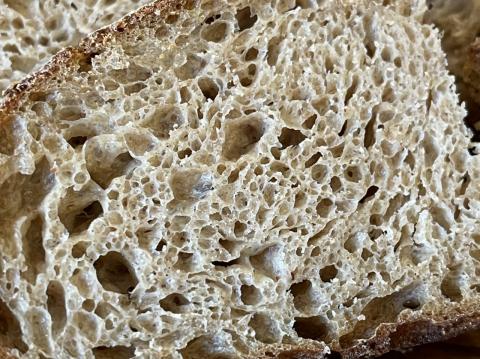 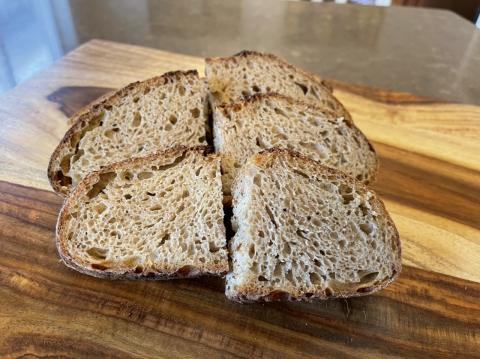 The commercial yeast loaf comparison is illuminating. I also think that I could get away with the rise if I baked immediately (no cold retard).

I think for a cold retard the final rise of 80% I did before would have been fine, oh well bake and learn right?

Given the formula, that’s a terrific outcome. Just the kind of crumb we look for in our weekly 60% ww (no spelt or kamut) breads. No alveoli larger than the thickness of a standard slice, to keep runny sandwich spreads between the slices and off our laps.
Beautifully done, as always.
Tom

Thank you Tom, when I bake this again, I’ll need to shorten the final bench proof and hopefully will have a taller bake.