My first babka! I am not counting the one I tried last week that was a complete, greasy mess that never did a thing. That one was a yeast based recipe that I think was faulty from the get go, and to date is the only batch of dough I have ever just thrown out.

I used Maurizio's babka recipe. Until just a few weeks ago, all my bread had been mixed/kneaded by hand, as I did not have a mixer. After much research and some input from Mariana (thank you, Mariana!), I decided to go with a Bosch compact mixer rather than trying to work with a food processor. Ordered in April, and it just arrived a couple of weeks ago. After reading his recipe/process several times through, I dove in. So glad I did, it came out really good.

Lessons learned during this bake:

- I don't know if it's true for all enriched doughs, but this loaf did not grow very much in size or have such obvious signs of fermentation as my usual bakes. I was glad I had used a glass bowl, so I could see the tiny bubbles through the sides and bottom of the bowl.

- Work quickly while rolling out the cold dough and spreading on the toppings. In my warm kitchen, the dough started to proof and get puffy, making it harder and harder to work with for rolling.

- I used Nutella (thanks to Danny for posting how to thin it out and make it spreadable). Next time I think I will try to make Maurizio's chocolate filling instead. The Nutella tended to glom onto the knife while slicing the loaf, and I had to keep cleaning the knife between slices. I was quite proud of myself for not getting cut, lol.

This was a hit for both of us, as well as some nearby friends we gave some to. You couldn't taste the Nutella, the flavor from the dark chocolate was more prominent. The coconut was just enough to give a little extra flavor and was a pleasant addition chew-wise as well.

Will definitely do this again, probably at the holidays.

Getting the filling ready. I froze the chocolate first, then just smashed them inside the baggie to get small chocolate chunks/chips/dust. 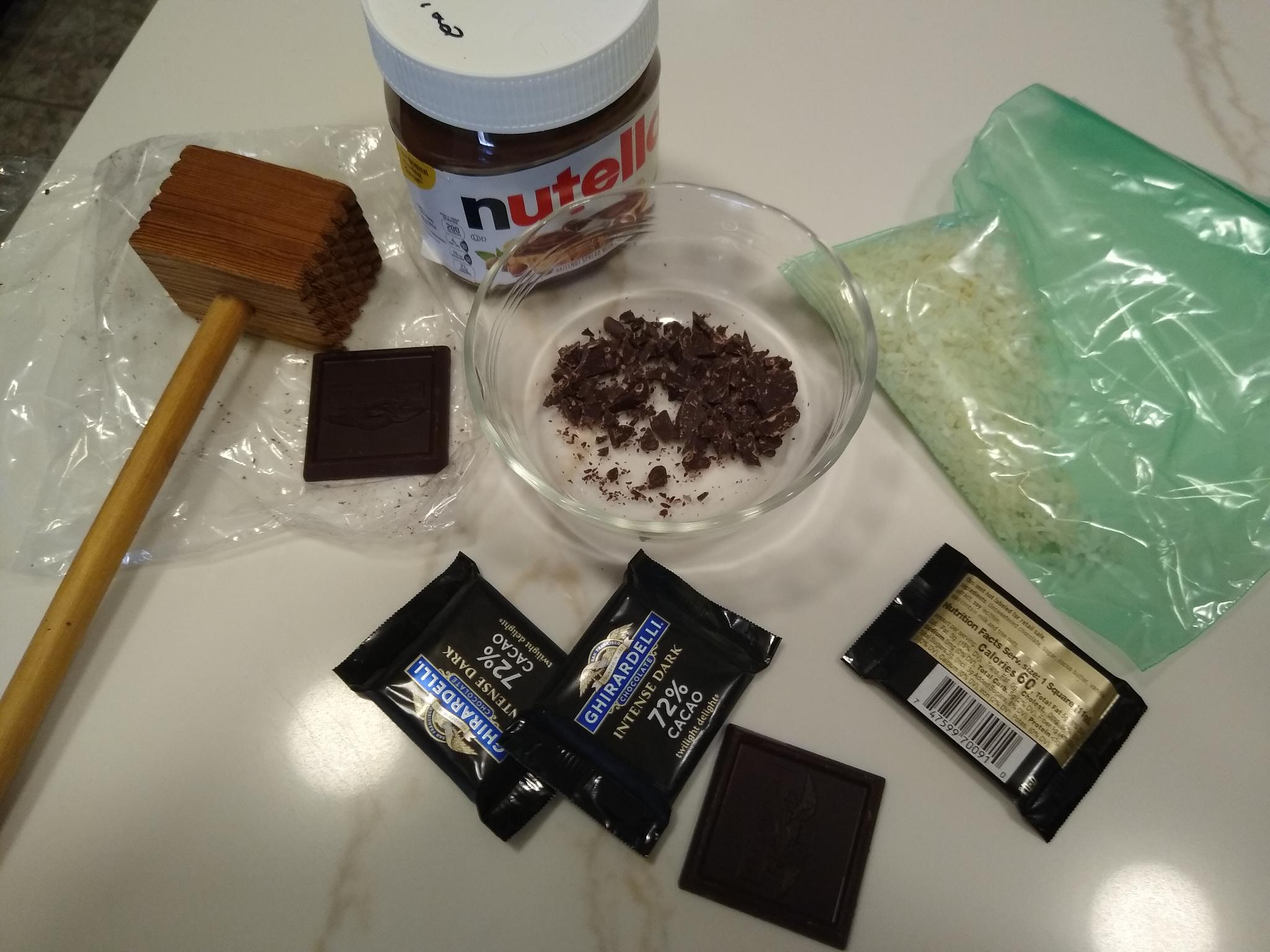 Filling in place, ready to be rolled up: 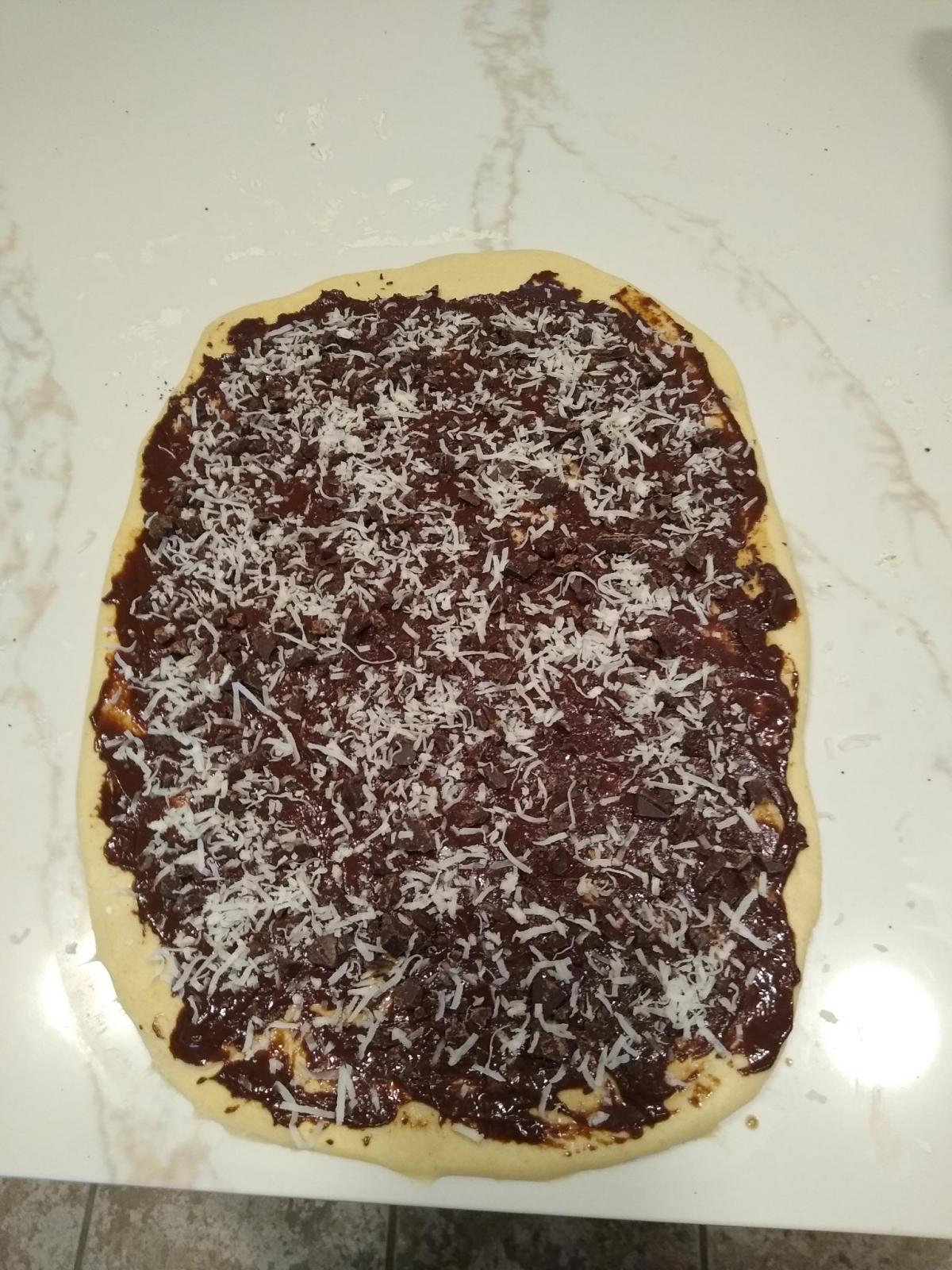 Proofed, coated with egg wash, and ready for the oven: 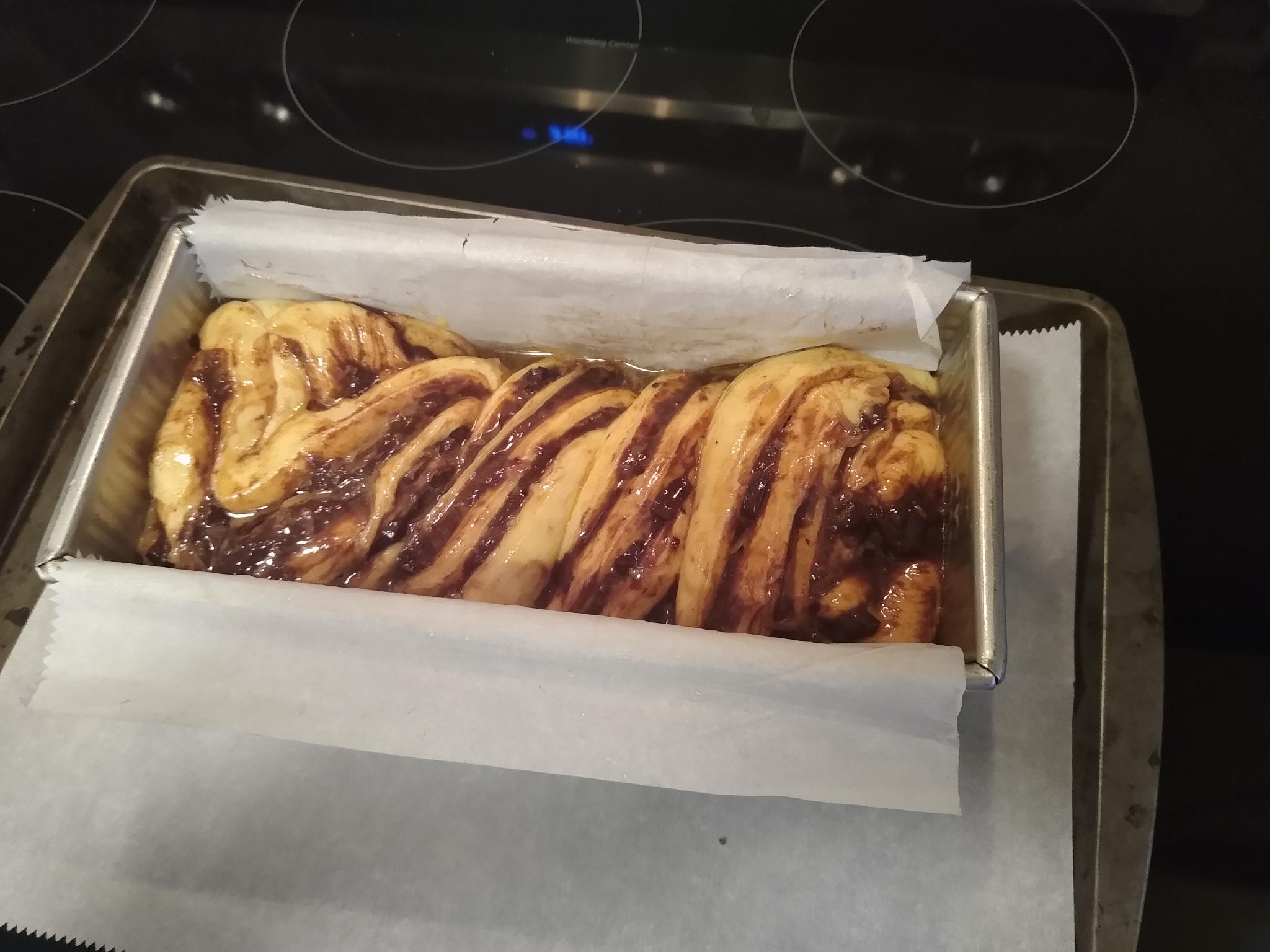 Cooling. I sprinkled a little more coconut on top, then used the simple syrup glaze to sort of glue the coconut in place: 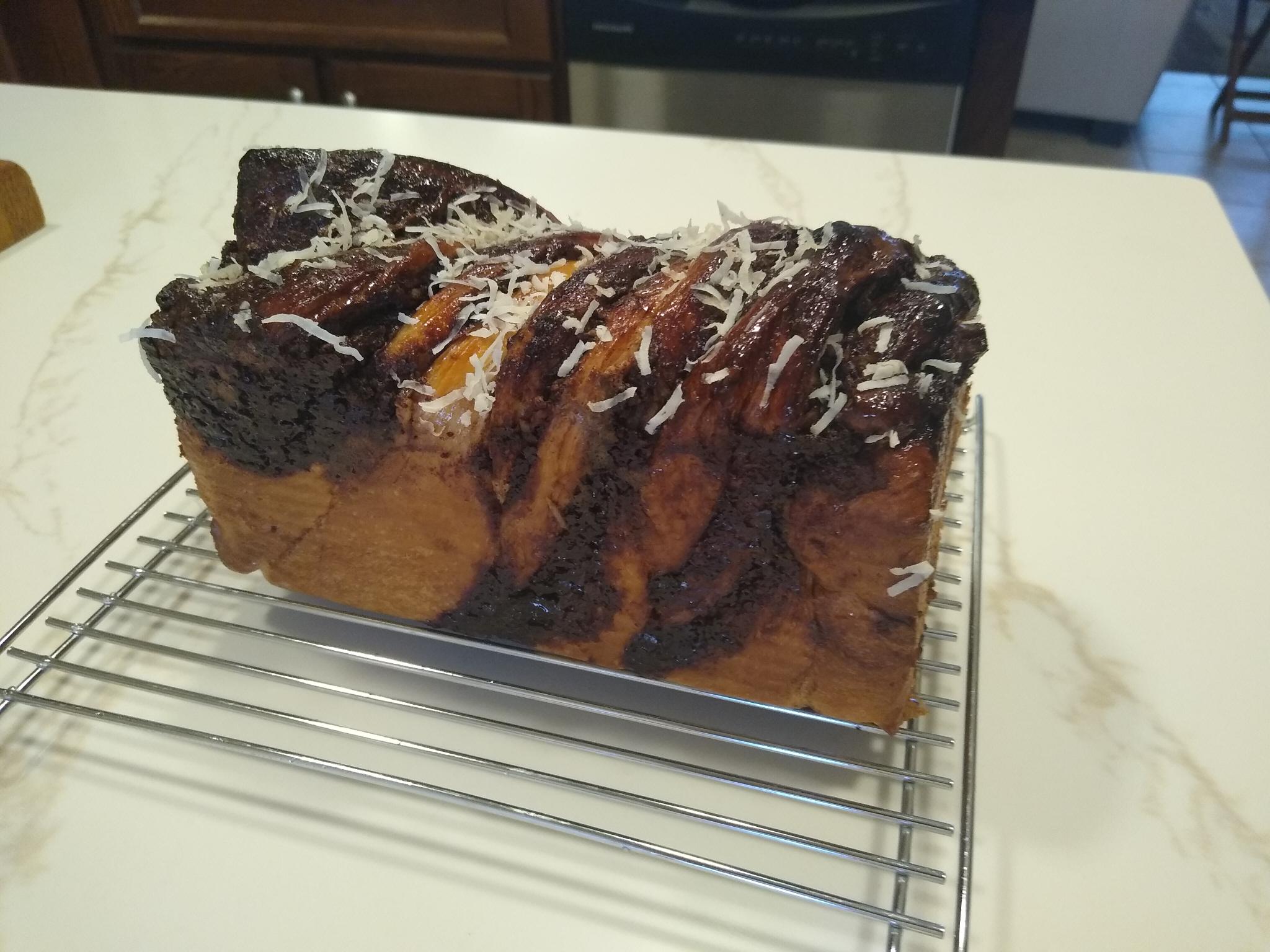 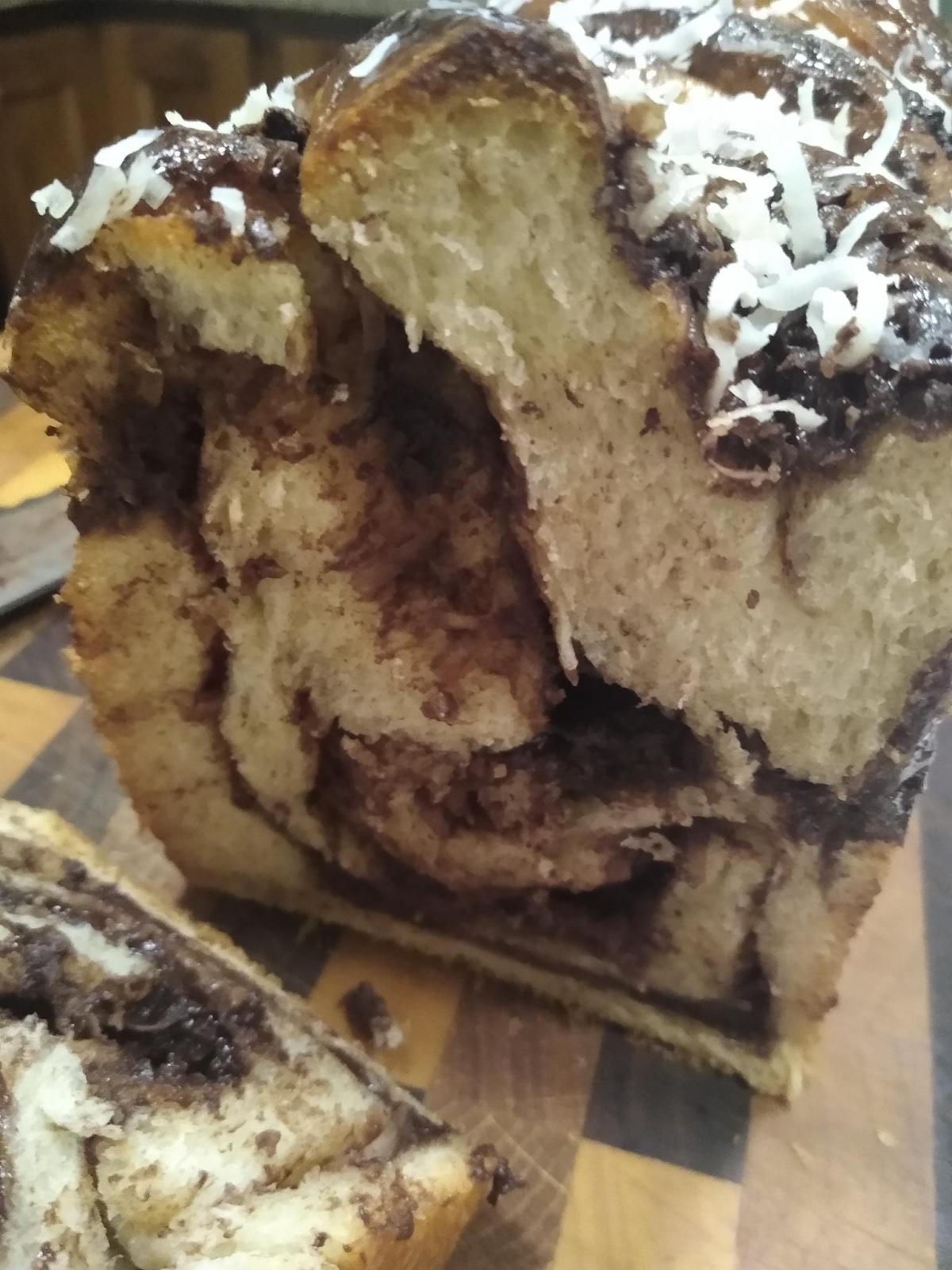 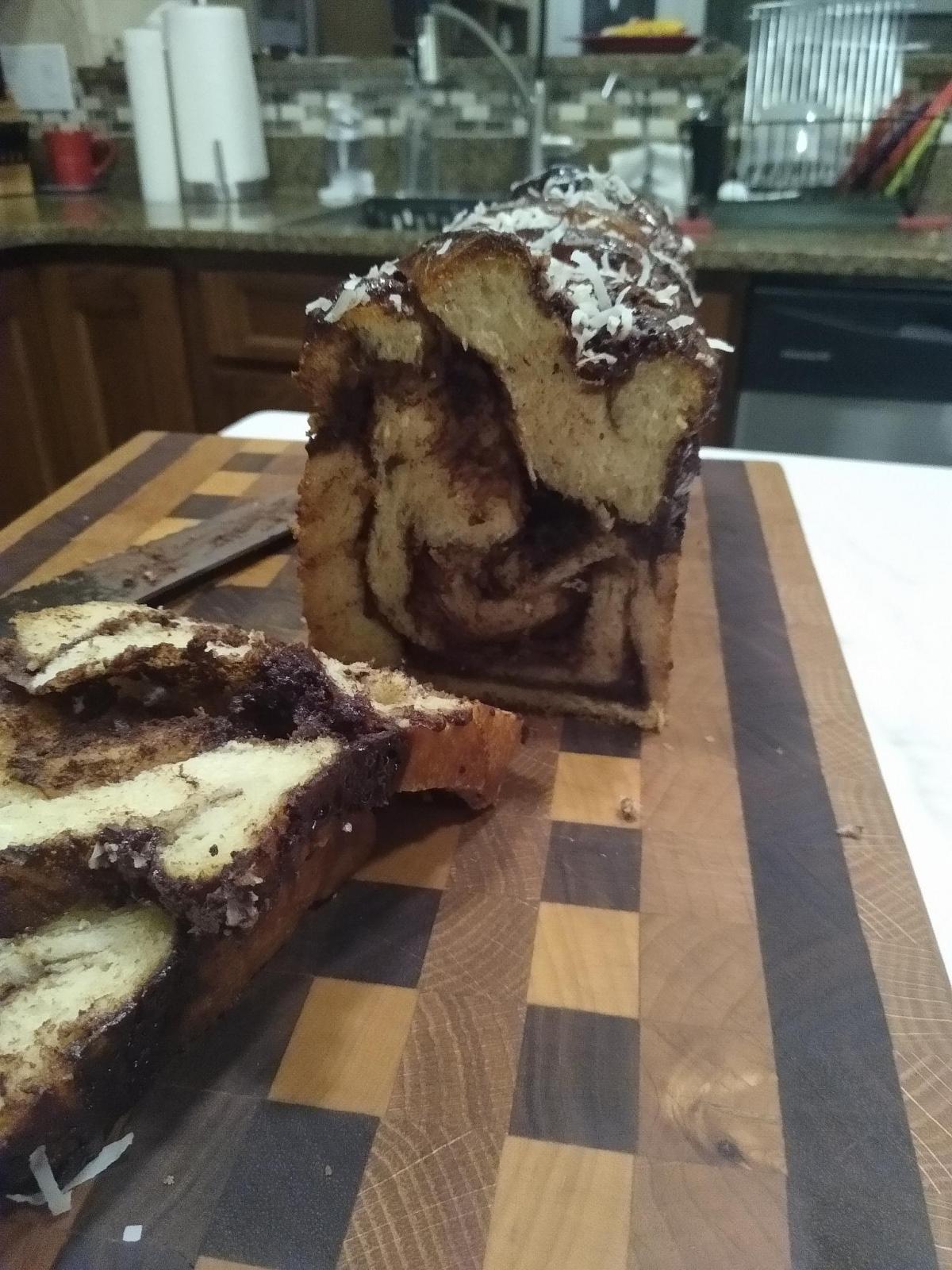 Looks so delicious Mary.  I love chocolate coconut and my partner does as well.  That might need to be a future babka in my home.  I started out trying to mix by hand but soon found that this babka dough is far stickier than my milk bread doughs.  How do you like the Bosch mixer?  Is it particularly good for mixing dough?  Also, can it do other things such as whip cream?

It's a cute little mixer! My aging joints appreciate that it's light weight (compared to a KitchenAid) and it's compact and stores easily in our small kitchen. I tend to only make one loaf (around 950 gm TDW +/-) at a time, so the size is perfect for that. I did make one double batch, and it seemed to strain and be at the upper limit capability wise. It wouldn't surprise me to learn it has plastic gears, but I don't know that for sure..... Since the mixer doesn't have a lot of mass, once the dough starts whirling around it wants to start moving around on the counter. They counter that tendency with little suction cup feet that hold it to the counter. I made a cake with it and it didn't do that nearly so much. And yup, it has several attachments, and could easily make whipped cream, etc.

It probably wouldn't be good for someone who uses their mixer a lot, or who makes bigger batches of dough, but for our simple purposes it's perfect. It might be a good "starter" mixer for newer bakers, or maybe as a wedding/new home gift.

That sounds good Mary, I'll have to look into that, my KA mixer is making clicking sounds now which I believe means that its gears are going.  Thank you.

I recently 'inherited' a 45 year old Sunbeam 'Mixmaster' - my first bench mixer. Glorious machine with just 3 flaws - the large bowl is HEAVY, the attachemtns are plated and not stainless and there is no dough hook. For mixing and beating, though, it was, and is, simple fantastic as the action involves having the beaters at one edge of the bowl, with the bowl rotating. Makes it SUPER easy to add ingredients or use a spatula to scrape down as it's running.

BUT, it was replaced by a Kenwood Chef Elite XL. This is another glorious machine and, while I vaccilated for an inordinate amount of time, I chose it over the KA and I am happy I did. The KA looks nicer - after a fashion - and the body feels sturdier, but everything else about the Kenwood is better, from my point of view. Actually, I lie: there is one thing I dislike about it: the bowl handles; the KA is much better in this regard.

North American options are often not directly equivalent but there it is.

Back to the point, the action of the old Sunbeam, where the bowl rotates, is just better, in my experience. If I could have both on the bench, I would.

That's one gorgeous loaf and flavor combo! I'll have to test this one when the mood for sticky bakes return!