This is a 60% whole Kamut 80% hydration sourdough loaf I put together testing what I believe works well for pH guided dough development.

Because I didn’t do an overnight saltolyse I did add 0.5% (2.48g) diastatic malt to the dough at the time of wet aultolyse.  By wet autolyse I mean I mix all the water with all the whole Kamut and diastatic malt without the salt, bread flour or levain.  The idea here is that I want to quickly hydrate the bran while also making it easier to add the stiff levain to this 1 hour later.  I believe this is working well for me although this bake is just the second time trying it.

The overnight levain was cool room temperature fermented with a low hydration of 60% to ensure that it wasn’t overfermented by the morning.  The pH of the levain at the time of use was 4.04 and had risen almost 4x.

After the 1 hour wet autolyse I added the levain and salt mixing it in the wet batter like slurry of the dough.  Once well incorporated which took like time, I add the bread flour and mixed until no dry flour remained.  After a ten minute rest I reassessed the dough and added the hold back water and mixed.  After another ten minute rest slap and folds were done to moderate gluten development (700).  pH at this point was 5.42

At 30 minute intervals first a bench letter fold was done, then three coil folds until the dough felt strong and wasn’t relaxing.  This was done at warm room temperature of around 78-80ºF.  Bulk was ended at a pH of 4.47 corresponding to an aliquot rise of 50% and the dough was shaped and placed into a banneton and left to ferment further until a pH of 4.07 was reached.  At this time the aliquot jar showed >90% rise.  The dough was then placed in a 3ºC fridge and left to cold retard for 20.5 hours.

The next day (19.5 hours later) the oven was preheated to 500ºF with the dutch oven inside.  After 1 hour when the oven was up to 500ºF the dough was removed from the banneton onto a sheet of parchment.  The pH at this point was 3.97 using my automatic temperature control pH meter.  Some of the rice flour was brushed off and the dough was scored.  The dough was transferred to the dutch oven and baked as usual.  20 mins at 450ºF lid on, then 10 mins 420ºF, then lid off 15 mins 420ºF. 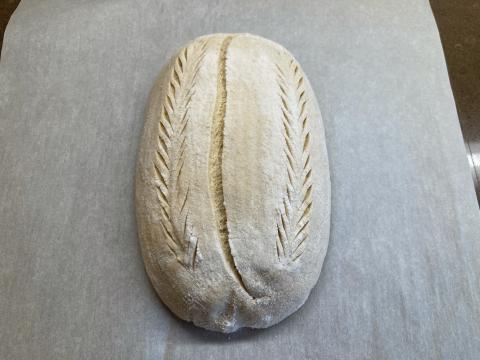 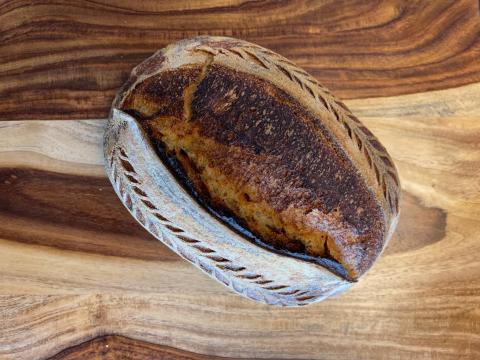 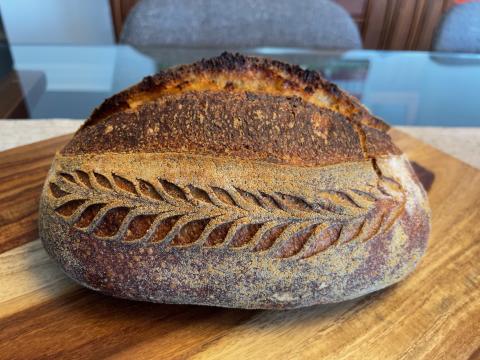 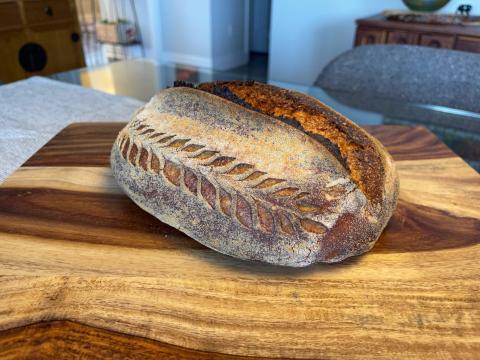 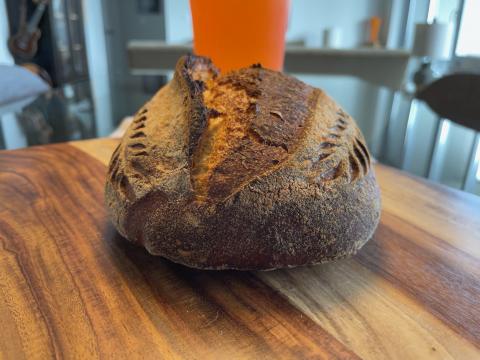 I just love reading your process and seeing you apply science to grow your knowledge! I can’t wait to see the crumb!

Thank you Danni, I’m glad it didn’t bore you!  I’ll keep my fingers crossed when slicing this and hope for a good crumb.

For 60% whole grain I can’t say I’m disappointed in the crumb!  It is even and relatively open.  I probably could have pushed another 0.1 pH lower.  Kamut seems to be a pretty strong flour.  I also think I could have gone higher with the hydration as well, but since this was the first time working with this batch of whole Kamut, I didn’t want to push my luck. 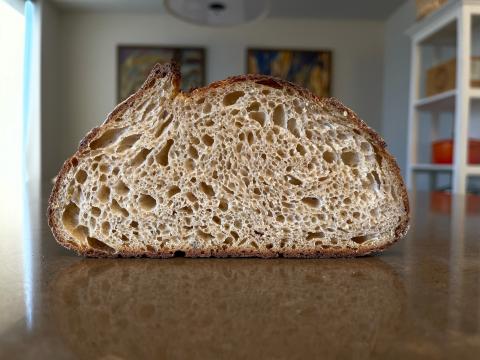 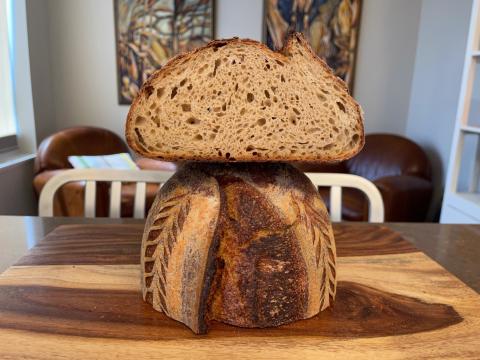 Just beautiful! And I bet super tasty. I love Kamut!

Thank you Danni, your comments are much appreciated.  I love Kamut too.

That’s a fantastic looking crumb especially for this high % of Kamut.  I’m sure it’s very tasty as well.

Ian thanks for your comments, I am happy with this bake all around.  I’m particularly happy that I’m finally honing in on the ideal pH for these various doughs.  I believe that the stronger the gluten that the dough has the lower the pH can go with fermentation.  Earlier I believe I was going too low.  That combined with shaping too late was compromising the crumb.

Hello ! What a beautiful bread ! I love Kamut.
I just made one with 20% of Kamut. May I ask you how much diastasic malt you put ? It’s not on the recipe. Thank’s in advance.

In the first sentence after the spreadsheet “Because I didn’t do an overnight saltolyse I did add 0.5% (2.48g) diastatic malt to the dough at the time of wet aultolyse.”

I hope you do try baking this, it is a lovely bread and with 60% whole Kamut has that buttery nutty flavour that I love.

Sorry for that ! I was focused on the image 😉

I will try for sure and let you know.
Thank you for sharing.

Lilite, no problem have a great weekend.
Benny

Just confirming - that's pure diastic malt, right? (As I know some are blended with flour to make addition a little easier.)

And, while you may think a slightly more open crumb is possible - there's not a thing I would change even slightly about that loaf. I have not, until this moment, thought that I needed to go and buy and bake with khorosan but, half-way through this post, I already had browser tabs open, researching options.

Some loaves just energise me to bake and this loaf is as high on the list as any I can recall seeing.

Tell me - if you would be so kind - how's the bitterness? I.e. does whole khorosan share that same slight bitterness that whole 'modern' wheat does? My partner is an honest, simple person (my very favourite kind of human,) and loves a good white bread above all others, including (and perhaps especially!) my sometimes overly exuberant additions of  white and wholemeal spelt, medium rye and wholegrain. I am wondering whether it is simply a greater sensitivity to the bitter flavours.

Hey Dan, yes the diastatic is pure diastatic malt and not mixed with flour.  If I add diastatic for a hearth loaf but not a baguettes, I’ll add 0.5%.

I haven’t found the whole Kamut to be bitter at 60%, I haven’t yet tried baking it at 100% but at 60% there was no bitter.  I used to avoid baking 100% whole wheat but my baking of 100% whole red fife lead me to believe that all whole wheat isn’t bitter.  My experience with bitter whole grains has been with store bought whole wheat bread.  As I have started to bake more whole grains I haven’t experienced the bitterness yet.  I would recommend trying some Kamut in your bread starting out low and seeing what your partner thinks.  I do find that it is a nicely mild flavoured whole grain of the whole grains that I have baked with and probably a good gateway to whole grain baking.

Thanks for the reply Benny - I'm trying to find somewhere that sells both white and wholemeal khorosan by the kg, as I'd like to try both but probably don't need 5kg of each!