Danny
Bread baking can be super simple or mysterious and complex. It depends on how you approach it.

Low inoculation makes dough very non-acidic, LABs multiply for a long time until effects of acids they produce start slowing them down, and in the end produce more acid (since they keep producing it even when they are not multiplying in a more acidic environment). With high inoculation the pH of the dough is lower and drops quicker, since there are more LABs to start with, and so LABs don't multiply as long, and final acidity is lower. Also, starting with more yeast aerates the dough faster, and so fermentation takes less time.

If the parameters (pH drop per unit time, and how it depends on LAB concentration, and how LAB multiplication depends on pH, and how time to enough gas in the dough depends on the starting yeast, and any LAB-yeast interaction) are known, the process could be modeled! Could be a fun project.

I have considered your thought in your first paragraph. But don’t have a handle on it.

Maybe someone can give us a numerical example. Say 2% PFF and 20% PFF.

Can someone give us a hypothetical idea of population generations over time. Also a hypothetical time comparison of each to arrive at a pH that will halt LAB reproduction.

Not looking for accurate numbers, only an idea of how the acid production in both cases proceeds at the same temp. It is understood that fermentation duration will be greatly reduced in the 20% PFF.

This paper has a lot of data, and even a model, but putting it into a dynamic form will be tricky, we need to also know the rate of acid and CO2 production...

I have read it perhaps 80 times.   Learn something new every time. But the models were not designed to address this problem.  Could they be used?   Maybe with some work, but you do need the acid production rate from somewhere and that is not just a model issue.  You need some measurements.  But somebody has that result too.

Indeed, these models can predict the growth rate in particular conditions, but not how LABs affect the conditions, and therefore how the conditions change over time. I'm sure this data is out there somewhere, although spread out over different papers using different setups and different species...

But before we start we need some important constants and relationships and it is not immediately obvious to me how we go about discovering both which ones are important and what the range of values are.  Things like:

Perhaps many others we don't yet appreciate.

Somebody has done this already so the first part of modeling is finding the current solution to the problem and understanding it.

Exactly right, these are the points I tried to bring up above about certain unknowns that would need to be found or measured to make a dynamic model. Thank you for writing it so clearly here.

Ilya and Doc,
Thanks for taking an interest in this. I hope we can get a basic answer.

My present assumptions are - when a small amount of Levain is used (say 2%PFF) there is more fresh flour to buffer the dough. Because the pH of the dough starts out higher than a 20%PFF dough, the LAB are able to multiply over longer time. And when the LAB are no longer to reproduce because the pH gets too low for then, the LAB are still metabolizing food and producing acids. It is my present thought that the LAB in the 2%PFF are able to make more generations of offspring than the 20%PFF. But are they able to numerically out produce the 20%PFF once they inevitably halt reproduction because of low pH.

Is the basic answer that the 2%PFF ends up producing a larger number of LAB microbes (compared to the 20%PFF) once they are unable to reproduce? I can hear Debra’s answer, “things are never that simple”. LOL

So, the short answer to the above is that the statement is false. A smaller levain doesn't always equal more sour bread. Your mileage is based on the sum total of your starter, your flour, your conditions, and your methods. And all four of those inputs are multifaceted on their own.

It's never that simple with living things.
dw

Thank you for the comment Debra. Would you say the logic to explain why a smaller levain can make a more bread is right though? As we discussed above, there are a lot of variables to this equation and as you say it depends on the specific conditions and recipe, but I'm just wondering whether the principles are correct?

Let me get back to you when I have more time :)

I stand corrected, “Its never that simple with living things”.

I seldom use less than 10%PFF, but my most sour SD uses 2%PFF or less.

” A smaller levain doesn't always equal more sour bread.”
Inthink it takes more than just a smaller levian to make very sour SD. I think a small levain and long fermentation makes sour SD. I BF until the dough has passed the maximum Oven Rise/Spring state. It would be considered over fermented by most on the forum. The crumb is not open, but the dough is not over-fermented to the degree that the loaf becomes a brick. Below is an image of very sour tasting SFSD. Because of the extreme fermentation panned bread are best, but free forms also work well. 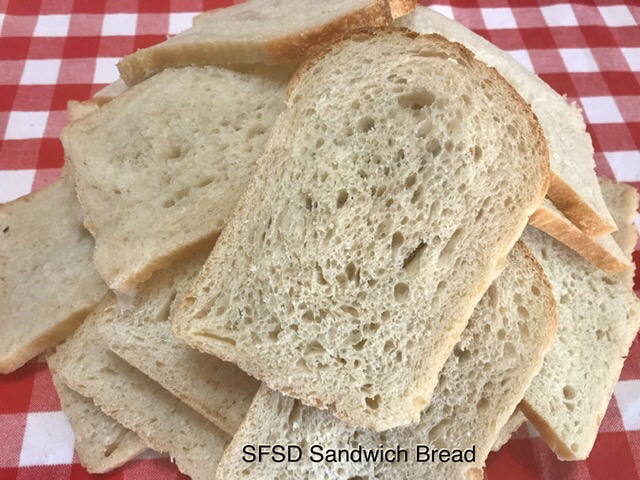 I think it is the intricacies of SD that draws many of us to it. Looking forward to your rely when time permits. It is exciting to learn.

Another statement that seeks comments (Pro or Con) from others.
It is my experience that a super sour SD starter is not necessary to produce a super sour SD bread, IF extended fermentation time and temperature is controlled.

Another thought, related to your statement, about the ripeness of the levain/starter.  Following the same logic from my original hypothesis, if a very sour overripe starter is used, it might lead to a less sour final product, as long as the yeast component is still sufficiently active. And considering that yeast continue to multiply at lower pH where LABs slow down, there should be a significant window of opportunity there.

And also all of this logic and environmental factors also apply to starter maintenance, levains and pre-doughs, and that would multiply the variables (the possible starting points, in particular) for the final dough considerably!

I've given your question a lot of thought, and chose to simplify the logic rather than complicate it (because everything in sourdough is conditional, or relative to something else). Perceived sourness of bread depends on how much acid you end with, not how much you started with or how long LAB multiply. As David said, "It's just a question of whether you add the acids when you mix the final dough or you let them develop during a prolonged bulk fermentation." I would add that acid accumulation doesn't stop at the end of bulk. The rest is about your flour and how you manage your fermentations to balance the rate of souring with leavening and inevitable breakdown. But that brings this discussion to somewhat of a black hole, so I'll leave you boys to the modeling and measuring :)

An interesting paper from 1997 with some second order models of some of the relationships of interest.

On a first reading I found some potentially useful relationships that I had not previously considered:  dough yield (water availability), salt, and citrate as well as the usual suspects.  Some of you may find this interesting and perhaps even useful. Note the data on numerical density of LAB and yeast and the method used for their control.  I don't know why I have never seen this paper before.

Doc, for the multitude of us that won’t comprehend 10% of that paper, could you some up the findings?

It's never that simple with living things.

I have been thinking along these lines Ilya, but there are so many parameters that would have to be guessed (if they weren''t available or measurable).  What matters is the population of LABs at the time when the dough has reached the conditions for the sourdough yeasts to start to multiply (because you will bake at a time after that determined mainly by how the yeasts are growing/have grown).  The bigger that LAB population, the greater the rate of increase of acidity over the rising time.  (This would be the rationale for adding acidity to the final mix, which will shorten the time taken for acidity to reach the level at which sourdough yeast are supposed to get going, and so reduce the population of LABs and so (paradoxically) reduce the acidity in the final loaf if you bake it as soon  as you have the desired rise.)

I guess that in an ideal world, you would want acidity to rise to the required level for yeast mulltiplication, stay there while the dough rises, then ramp up sharply just before baking if you wanted a more acid flavour.  This would minimise the area under the acidity/time curve and so minimise the risk of the acidity spoiling the dough.

This thread reminds me of a quote I saved back in '12.  Probably oversimplifies it, but makes sense just the same:

If the objective is to maximize the amount of lactic acid in the levain, you can let the levain ferment for a long time, but the LAB respond to undissociated acid concentration as well as to pH so as the acid builds up, the LAB slow down, but they do continue to make acid. If you make your levain using all of the water that will be in the dough, the effect is to dilute the acid so that the LAB continue to produce acid for longer (how much longer depends on the relative acid production rate sensitivity of LAB to lactate/acetate concentration vs H+ concentration (pH).  This does not explain why in some cases low PFF and long fermentation produce a higher acidity in the end product, but it may be one factor.  Of course as the pH gets down below (pick a number here) to 4.5 to 4.0, the native cereal protease enzymes come out to play and you can get severly degraded gluten if the conditions gang up on you.