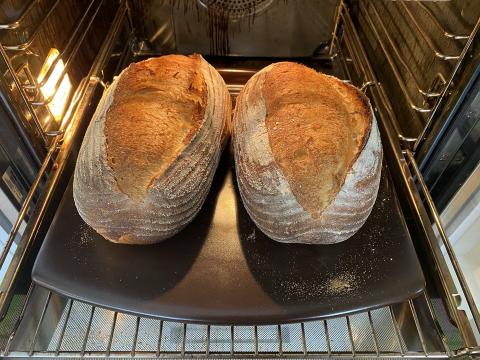 I don't think I could fit in a third loaf. Two 750-gram loaves are my maximum per bake.

spare oven in his back yard?

Good thing about a small oven - I think it is much more efficient when it comes to steaming. Barry, aka BarryVABeach taught me this. He believes, and so do I, that small steaming dough covers are better than larger ones. The steam is contained in closer proximity to the dough. Consider the ROFCO.

Yes the ROFCO would be terrific and I would consider one if I ever get motivated to start a farmer's market stall. A bit of an overkill for what I need now. My backyard brick oven is versatile for larger baking and roasting requirements. Our kitchen oven has its own steaming function that works great.

Ha Ha, Benny. Maybe I should overproof to get more in? 😉

Correct, but would a slice fit in the toaster? Wait....cut the slice in half!  Cheers. :)

A half slice could fit better as one side is now flat.  D

If you are a real crust lover, that 2kg loaf coud be shaped into a huge 🍩.

Was. Watching a TV special last night where scientists were taking 3-D printers into "space" and how to deal with getting metal dust particles to stay on a plate while a lazer precisely heated the particles into tools like a wrench.  They were working in a zero gravity airplane.

Now lets jump to baking in zero gravity.  If science can bake a wrench, why not bake bread with a lazer as well?  (Or maybe incorporate metal into dough so that while baking a wrench it could smell like...  ...burnt toast?)   I would like to suggest they design space traveling  3-D priter surfaces as long as a baguette. Save them a few problems when somebody (like me) sneaks some dough into the printer.  :)

We all know that dough, especially if it is a rye, will stick to a plate without a problem.   More questions.... Does dough dry out in space? Would dough rise indefinitely and never fall down or collapse on itself?  A new movie version of "The BLOB."  "Over fermented dough takes over space shuttle" -- rises until paper thin particles break off floating in space and plugging up air filters.

I wonder how bread dough behaves in space.

Anyone know off hand the low temperature range of a lazer?

In a documentary about the forming of planets in our solar system, the film included a space station experiment of small particles together in zero gravity.  Particles were suspended in water in a water bottle and instead of blending or "disolving" in the water, particles clumped together to form a mass.  I can't remember what the particles were but would like to see if flour particles added to water would clump together to form a dough. The next step might be to heat it with a lazer (write your name on it) and bake the clump into bread.

Ha ha Mini, I needed something to brighten my day (we are back in a snap lockdown!). Taking on your thought pattern on this, perhaps we could add some alum to the space dough to make it coagulate and form a mass. My family used to add it to the dams and water tanks to make the clay particles clump and fall to the bottom. I think the theory may still need some work before we have good space bread. :)