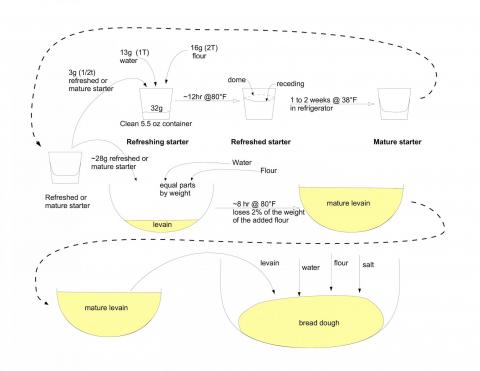 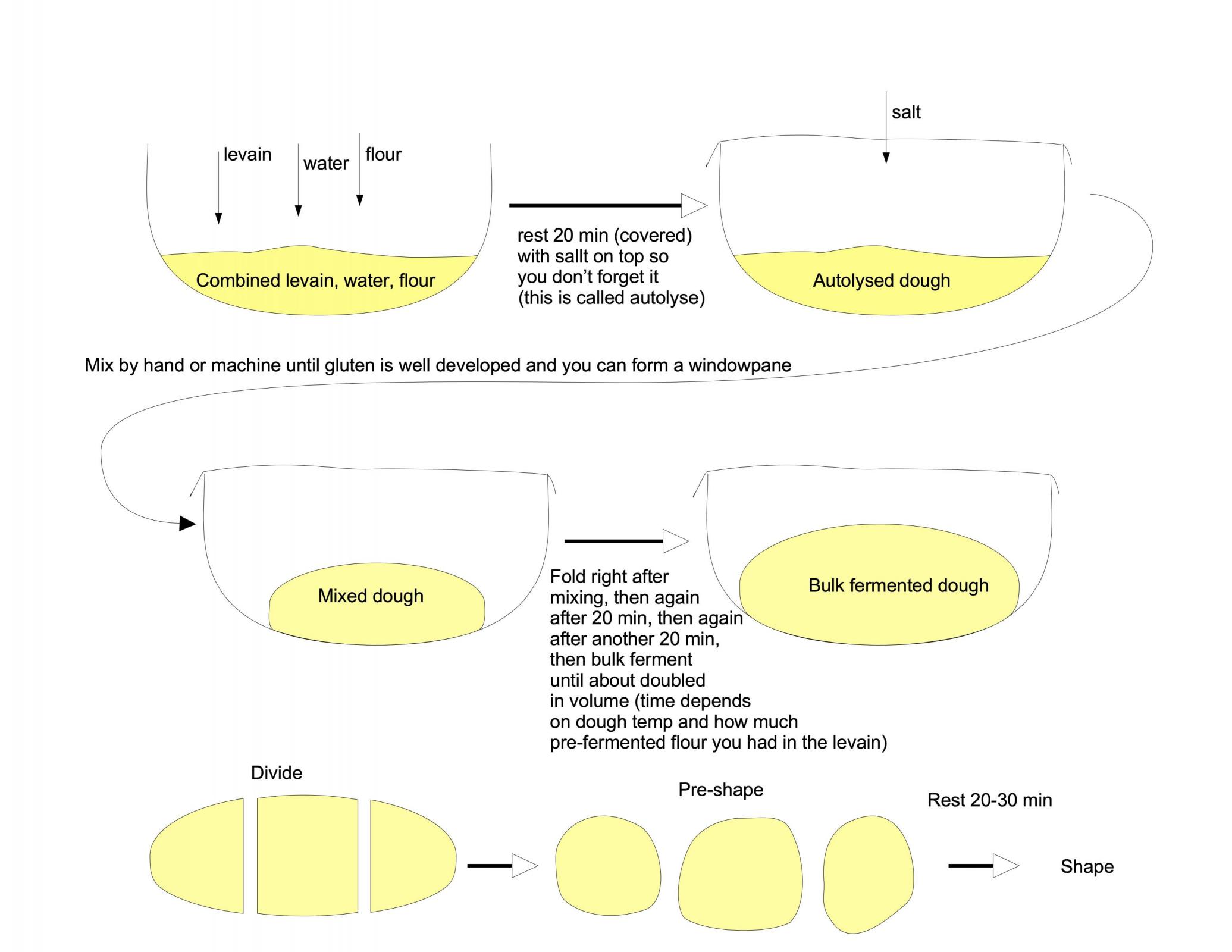 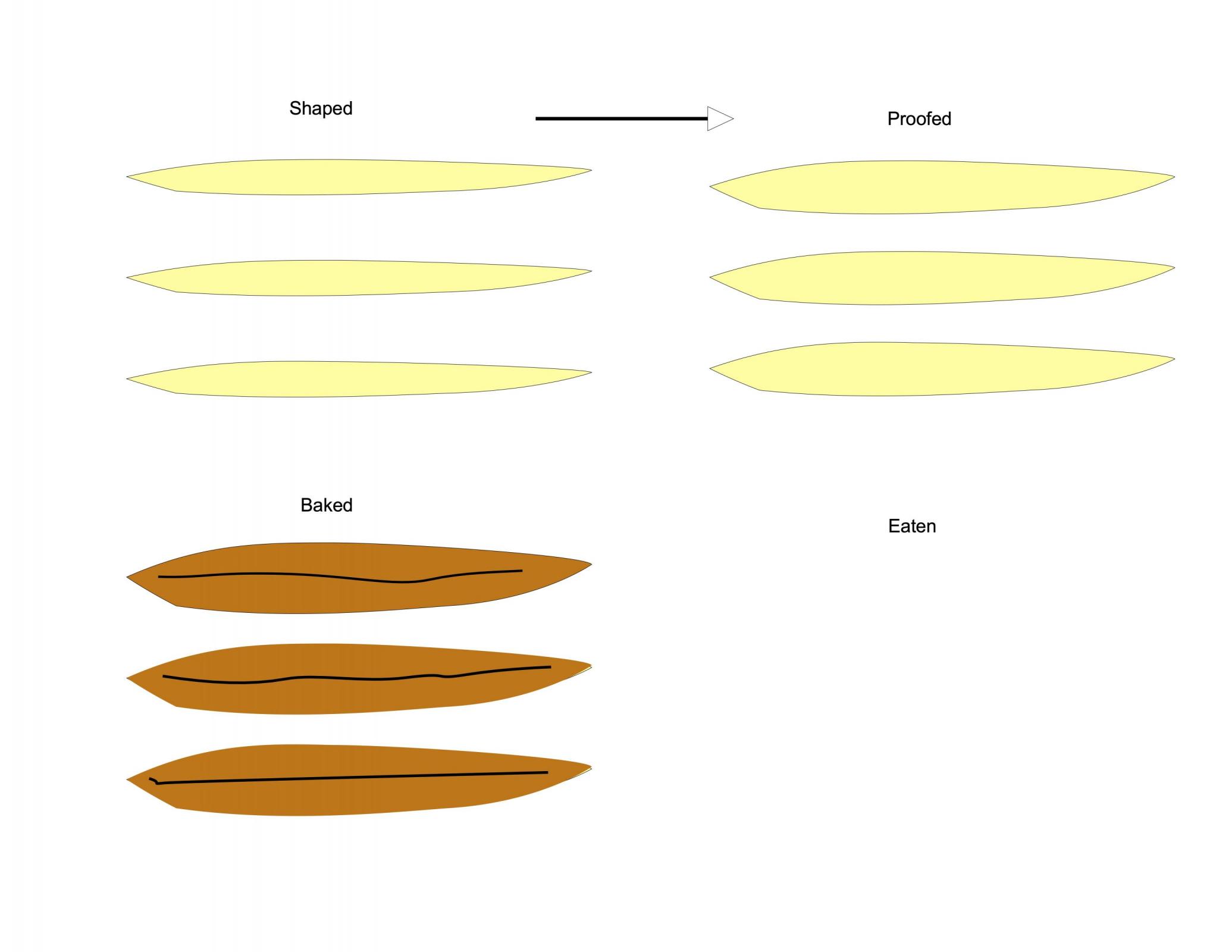 Thanks for sharing. The flow chart is very easy to follow and understand. It clearly shows the difference between maintenance and levain builds, often overlooked. I am a great advocate for constructing flow charts and link charts when trying to understand complex topics, particularly when rationalising multiple sources. They are great for refreshing and reviewing and often highlight knowledge gaps.

Here is one I did when understanding fermentation (Let me know if there are any issues): 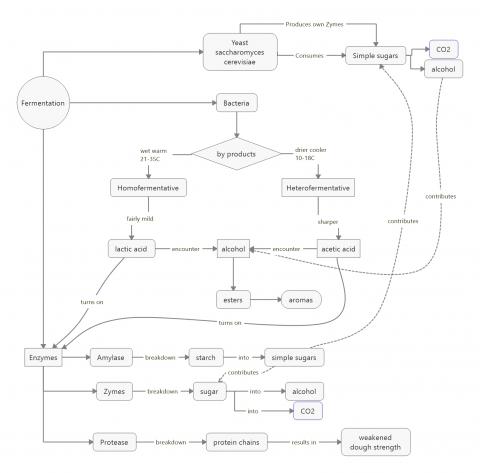 @Doc: This should be terrific for graphically-minded newbies, to be sure.  Clear and logical.  Starter maintenance amounts are uncannily close to my practice, so 👍👍 for that.  However I did note some long fermentation times.  12h @ 80˚F is 2-3x the treatment my starter needs to be refreshed to seed a levain.  While an over-fermented starter is a minor misdemeanor, a geriatric levain can be a felony and 8h @ 80˚F is about twice what my levains need to be doubled and domed.  From my decidedly Robertsonian mentoring, youthful levains make better doughs and breads.  ymmv.

@Gavin: Another useful graphic.  But what's a "Zyme"?  I can imagine apostrophic 'zyme as a contraction of "enzyme" if one fears life too short to waste on unnecessary syllables.  I even googled "zyme" without pertinently satisfying results.  In your chart, it assumes the place of enzymes that hydrolyze sugars.  As a (retired) biologist, I've never referred to such molecules as "zymes".  New terminology?  Seems like the place for maltase, invertase, hexokinase et al..

Or he was pluralising the Greek word "zyme"

I, unfortunately, made a typo twice; indeed it should read Zymase. Just shows that one should cross-check even an Aide-mémoire.

Thanks for pointing it out. 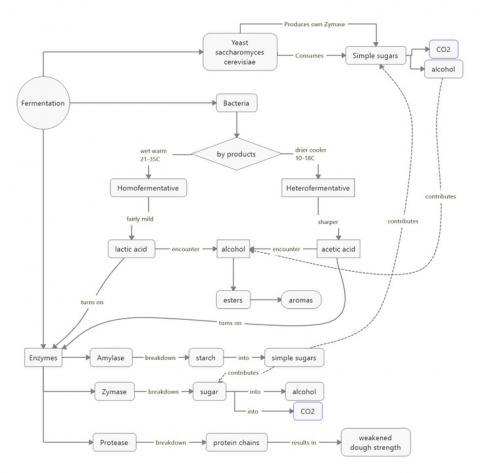 Thanks to Doc.Dough for some valued feedback regarding my fermentation chart. I have updated the chart that incorporates Doc's input and adds further detail and understanding. 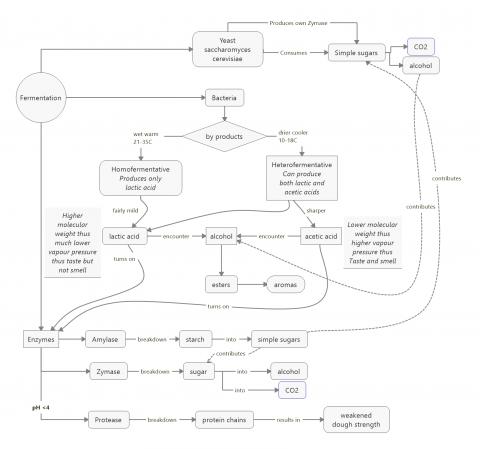 Yes, a lot of starter info on the web seems really misleading. I keep a small amount in the fridge and refresh before use, typically once every 1-2 weeks. I used to feed the night before but I can even feed the starter on the day of building a dough and simply put it in a warm place, take what's needed, and put the rest back in the fridge.

I've used up most of my starter sometimes and been left with maybe 5g or so to put in the fridge which is plenty to feed and build up again as needed.

So no discards for me, no feeding other than before a levain build, and only keeping a small amount in the fridge. Life is pretty simple.

I use 100% dark rye starter which seems plenty powerful.

Hi Doc. Can you explain why it is beneficial/necessary to build a larger levain to make the bread, instead of simply using the small amount you would usually discard from you starter?

If I tried to make a 3500g batch of bread (or even a 1700g batch), 29g of starter would  would take forever to bulk ferment, and since life is short I prefer to use about 12% pre-fermented flour.  You can do the math, but that means I need a lot more levain than I ever have leftover starter.

Since I can make up as much levain as I need in 12 hours (or so), I can always plan for X-hrs to make the bread I want (irrespective of whether it is a small batch or a large batch).  X seems to vary from 7 to 9 hours over the course of a year. So if I plan to make bread tomorrow I refresh the starter today at a time that is sufficient to allow the intended levain to mature by whatever time I want to start making bread in the morning (the window of usability for levain is probably around 6 hrs so it is not very sensitive).  Refreshing the starter and mixing the levain takes about 15 minutes by the time I clean up so that is a fixed investment. From there it is just muscle memory to make a batch of bread tomorrow in 9 hrs (this time of year).  Since bulk fermentation is approximately an exponential process, the exact time becomes harder and harder to predict/control when it is further in the future. A two step process converts it into one exponential process that is pretty insensitive to when you elect to terminate it (and proceed to making bread), followed by a second exponential process that is routinely predictable if you control the temperatures and ratios.  Of course you can make bread from a small bit of starter and a lot of flour, but the end point of each unique trial will be both different and unpredictable.  Could I do it that way?  Probably (and for a particular formula I do use a 1% PFF and a precisely controlled DDT and BF temperature). But why? Making my life easier takes precedence. Thus timing is the primary reason.

I don't know how I missed this last year. Just what I was looking for today. Thanks Doc.