Trying to learn more about pH guided sourdough baking I decided to bake another 100% Semola Rimacinata bread.  Last time I felt that the dough didn’t hydrate as well as I remembered when I last baked this for the CB so I upped the hydration from 81 to 83%, I think I could have gone further given the high protein of this flour.

With this bake I followed pH during bulk and aimed to get the dough into cold retard by a pH of around 4.0, the thinking being that the pH would fall further by about 0.2 during the first hours of cold retard as the dough slowly drops in temperature to 3ºC.  I won’t post all the details of the formula because I did that for the last bake and the only change is the increase in hydration.

The black sesame seeds were added during lamination and the white sesame seeds are on the bottom of the loaf.  The white ones were added when the dough was in the banneton.  This should keep things tidier when slicing the bread while still giving us all the sesame flavour. 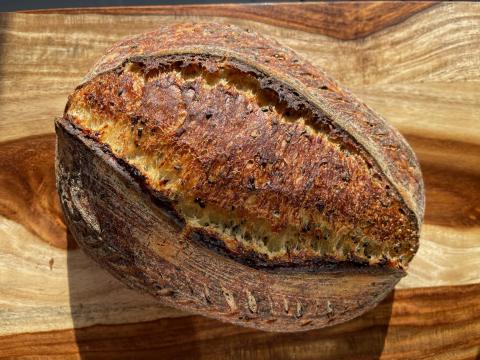 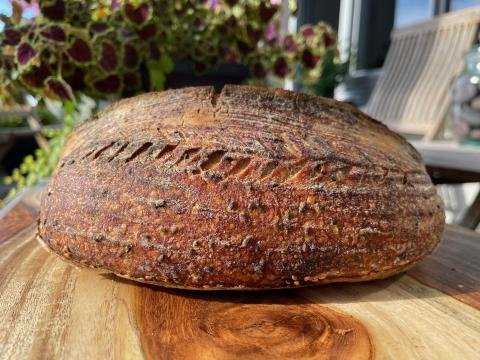 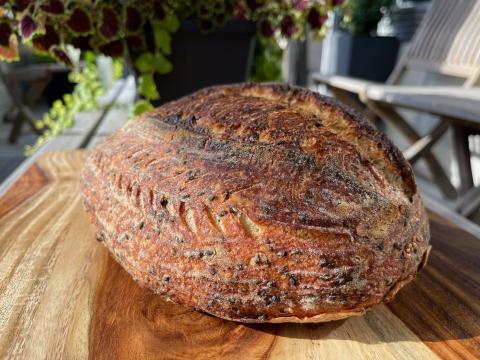 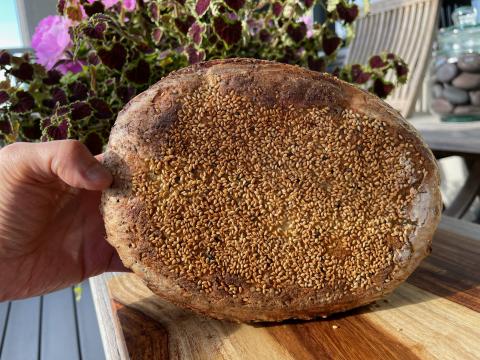 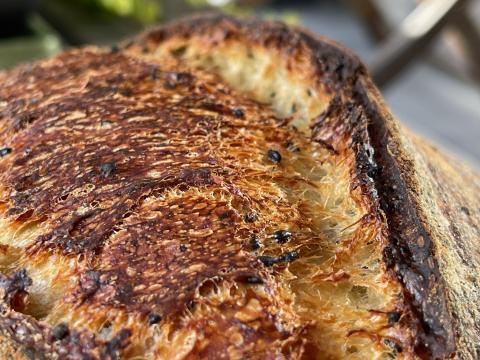 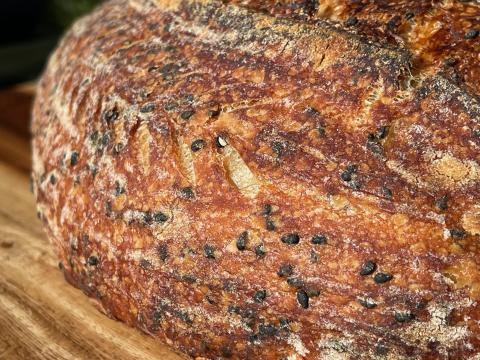 Benito  What type of ph meter do you use?  Nice bread as usual!

Thank you Vic.  I recently purchased the Hanna Bread and Dough pH meter.  So far so good.  It seems to hold the calibration quite reasonably and is easy to use and clean after use.  This meter is better than the cheap one I bought last year from Amazon for around $30 CAD.

Where did you buy it?  I live in USA.

I live in Canada and there is a local company that sells them by the name of Geneq.  I’m not sure where to buy it in the US, when I did a search I was able to find it in Canada and UK easily.

Looks great, as usual.  This reminds me, I need to attempt baking with durum wheat again, after a couple failures in the CB.  It is such strange stuff.  I'm excited to learn from your pH experiments!

@headup:  Be advised that Benny is baking with low bran durum, with the bran equivalent of semolina, as it is merely remilled (smaller granularity) semolina.

Even the "durum atta" from Golden Temple is low bran. Which alfanso uses for beautiful baguettes.

By baking with two kinds of whole grain durum (one fine-grind and one coarse-grind), and two kinds of low-bran durum (one fine-grind and one coarse-grind),  I've discovered that it's the bran in durum that makes leavened WW durum loaves hard to impossible. It's not mainly about the size of the grind, though that does affect the needed soak/autolyse time -- it's about how much durum bran is in your dough mass.

With 3 step bassinage (initial plus 3 additions), I could get up to 33% WW durum in a loaf and call it a success.

With single hydration, my WW durum is limited to 25% of total flour.

Durum bran, in high enough proportions, turns nasty nasty nasty. If you hydrate it too fast, or to too high a percent, it turns into super sticky glue and never unsticks, and never releases its water to the other less-hydrated flour components. So... you can "sneak up" (via multi-stage bassinage) on a good hydration, but if you step over the line, the dough mass is ruined and can't recover.  It makes a rubbery sponge kind of loaf. (I suppose you could add enough white flour or standard red/white whole wheat to recover and make focaccia or some unleavened flatbread.)

Note in isand66's durum bakes he's both sifting his home-milled durum (reducing the bran content) and limiting it to under 40% of total flour.

In other words ( if you're a STEM type person, you'll understand this logic):

After all, durum is a different species than regular/common wheat: triticum turgidum versus triticum aestivum.

Check out my blog for durum bakes and info, and let's continue the discussion there if you want.

Dave you’ve become the whole durum expert around these parts.  Your persistence and hard work baking with it has been very impressive. I’d love a slice of this! I love sesame seeds in bread and the black ones just do something special to yo look of the slices.

Dave's comment about durum makes perfect sense. I'm very wary of working with it, have had more than a few breads that have slumped to slime thanks to crossing over the hydration threshold. I once got a good result, with 20% rimacinata, but had to really work the rimacinata dough seperately in the Kenwood and only combine that dough in via lamination with other doughs!

It makes sense then that Benny would have been using sifted durum in order to get to those lofty hydrations. Strange to consider too that the Canadian climate would help even durum produce high protein flours, although I guess it might be that plus the sifting.

So Benny, as we're all living vicariously through your pH phase now, so I have a question for you regarding pH and fridge retards, have you checked Danni's approach of 'getting up early' with fridge retards and keeping the fridge time shorter than the usual, say 12 hour interval? Is there benefit to a shorter retard interval regarding further pH acidification?

I’ll have to explore the effects of cold retard over time on pH, but it is another interesting avenue to pursue.