TFL'er Bake List Week #5...  Slowly but surely working on the list of bakes I saw on TFL and wanted to try.  This week's bake was based on Paul's Barley/Wheat Bread loaf.

I used a 2-stage levain build with blueberry yeast water and a small rye starter inoculation.  Instead of hard, red whole wheat, I tried a soft, white whole wheat, and I used most of the WW in the levain builds to make sure it was fully hydrated.  The second levain was over doubled in 5 hours, and had a yeasty/yogurty aroma.

This was the first time I used this soft white wheat, and it doesn't seem very thirsty so I dropped the hydration to 70%.

The bake went well and the dough was easy to handle.  It wasn't sticky at any point during the bake. The only thing that was unexpected was the small size of the loaf.  After the initial mix, I thought I had missed one of the flours.  I had to double check my notes to make sure I didn't miss anything.  I'm guessing it's from the high amount of whole grain???  The loaf did rise well and had a good oven spring, but I should have used Paul's 600g flour per loaf instead of dropping to my usual 475g.  It would have filled the pan out nicer.

Loaf smells great and looking forward to slicing it tomorrow morning for breakfast! 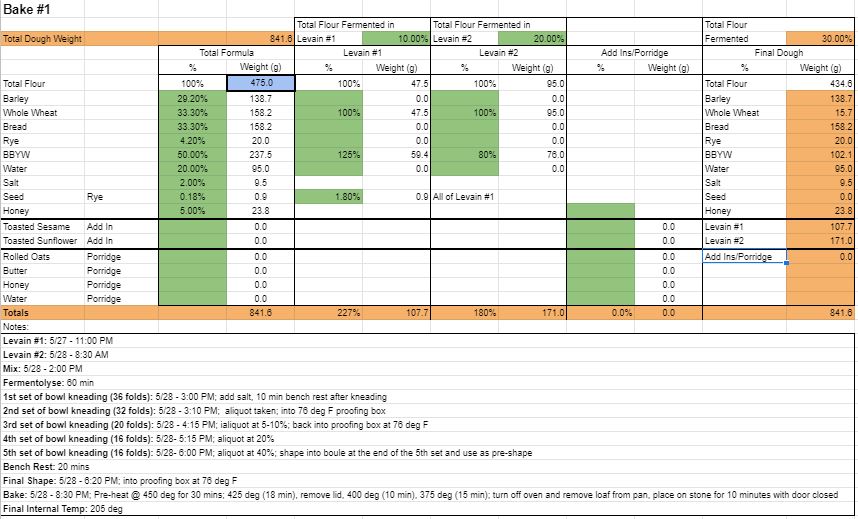 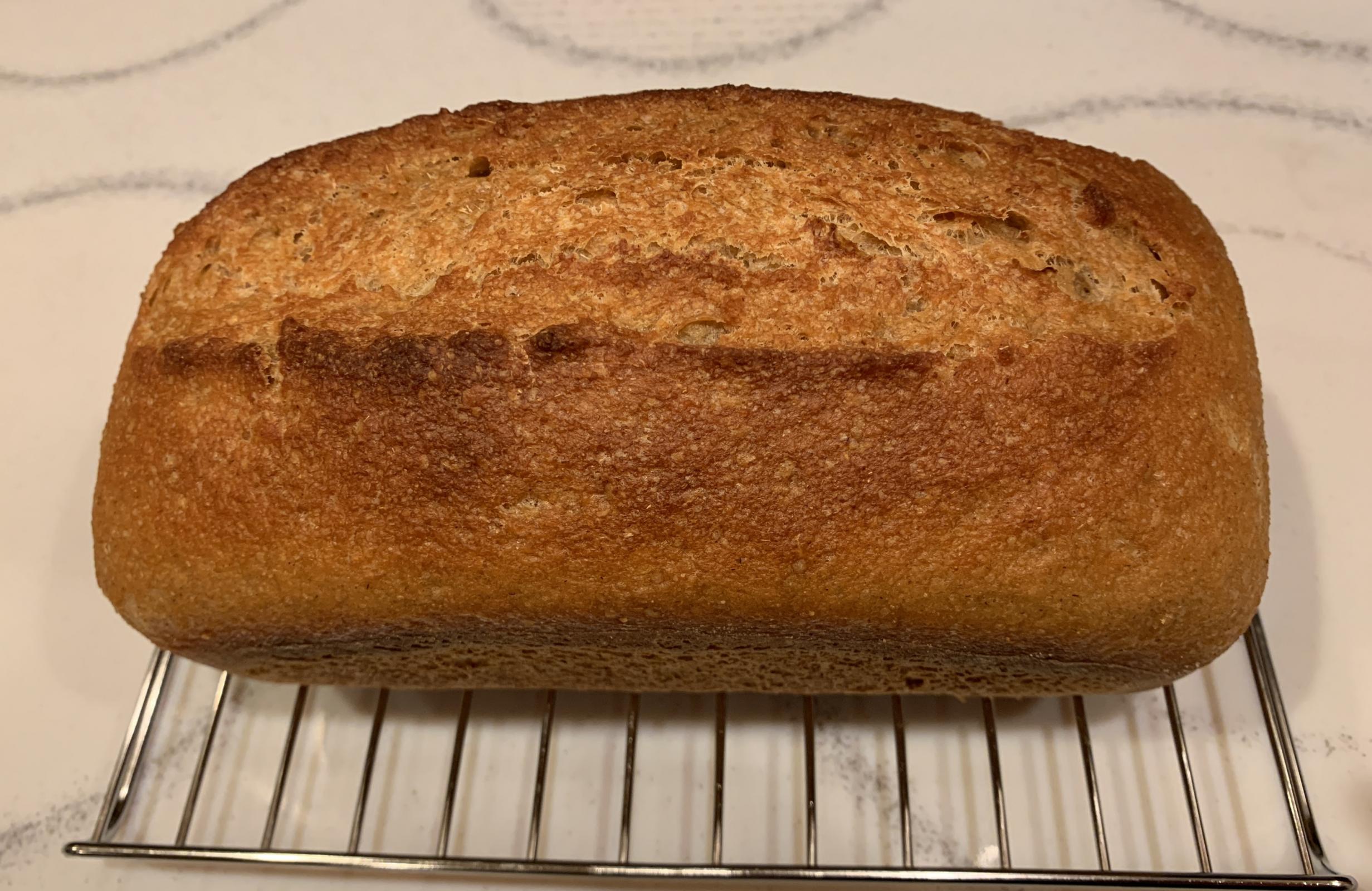 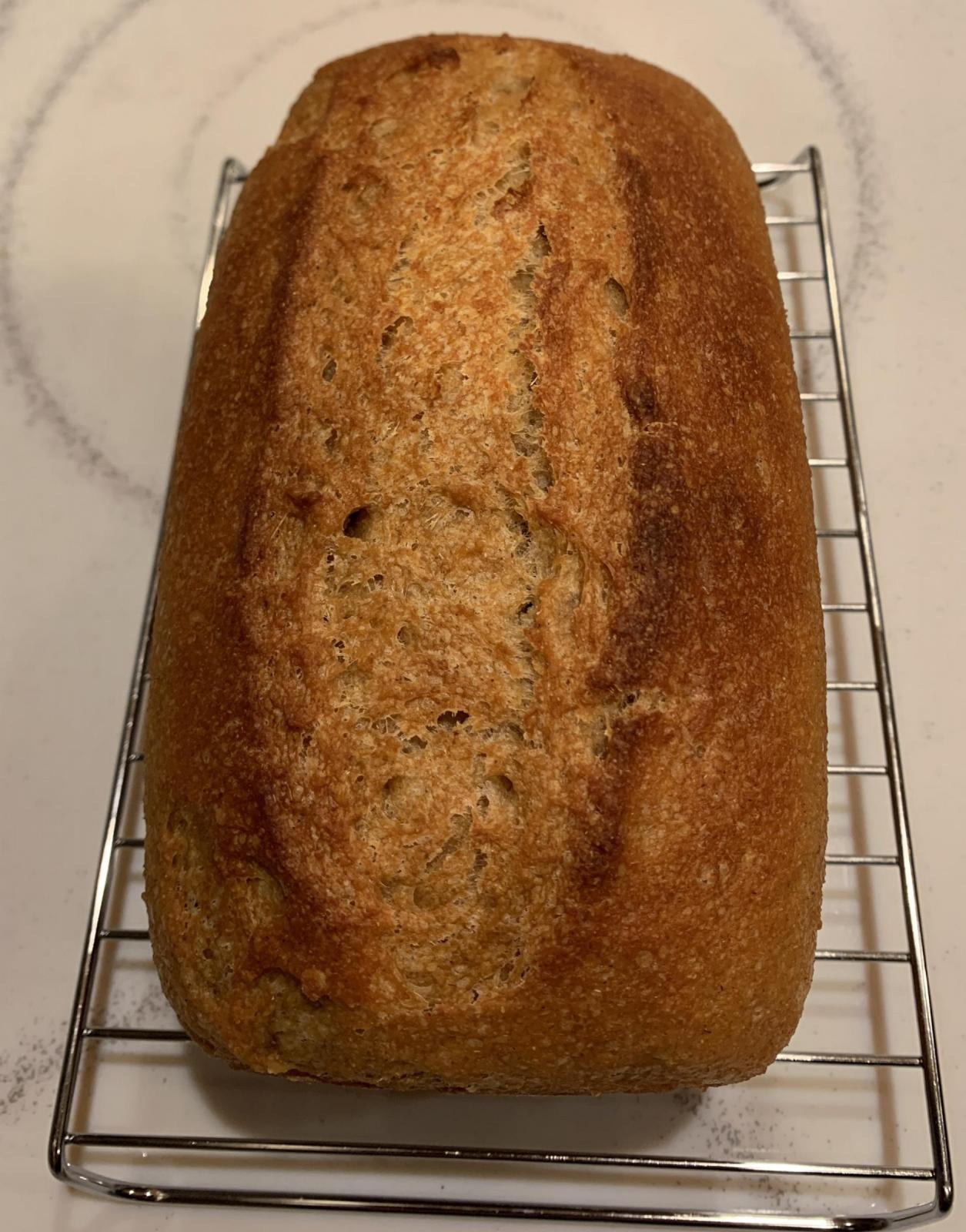 Maybe a little underproofed, and might need to be a little more gentle with the loaf during the final folding/pre-shape with all the whole grain in this loaf.  Flavor was good and made great toast to go with the eggs this morning!

Soft whole wheat may have played a part.

Soft wheat has less protein and less gluten, providing less cell/alveoli structure.  With all that barley, which has no gluten, you need as much protein/gluten as you can get in the 2/3rds wheat portion.

Side note: What Europeans call "soft wheat" is mostly what we would call "hard wheat" in north America. What they call "soft" is: "everything  that is not durum". So our north american "soft" and north american "hard" both fall under their "soft" category.

I didn't think about the gluten content when I bought this.  Just saw that it was whole wheat pastry flour.  Went to the miller's website, and they said it was soft white wheat but still whole grain.  That's what I was looking for, so I ran with it.  Another lesson learned!   :-)

Troy I’m sure that it is a delicious loaf.  I agree with Dave, the use of soft whole wheat is probably a big difference from Paul’s loaf.  As well with the lower protein of the softer whole wheat it will take less water and could compromise the oven spring somewhat as well.  Regardless, it does look good.

Benny, Flavor is great!  I'll just have to see if I can find some different recipes for that flour or use it in smaller percentages.

So many breads to make, so little time, lol.

Nice oven spring! As for dough volume, I have noticed similar changes (up or down) depending on the flour used. The first time I tried home milled hard white instead of hard red, I wondered if I had added too much. (I had not.). Maybe it has to do with how the different flours plump up after adding the water? The dough didn't feel any dryer, just more..... bulky for lack of a better term, and filled the loaf pan a bit more. I had chalked that up to fermentation, but maybe there was more than one reason.

How are you liking the blueberry YW? Does it bring a different flavor to the bread?

I can't say that I do notice much (if any difference).  I think I'd need to put much more fruit in to impart that flavor more.  Right now, both use a fair amount of honey as the sugar source during refreshment, so both have that same basic flavor.  I think the aroma of raisins comes through more than the BB, but I think that's because of the BB skins.  I might need to smash them a bit to get more juice during refreshment.  Either that, or go with 2-3x the amount of BB I use now and cut back a bit on the honey.

And you are braver than I, since I wouldn't have attempted using soft wheat flour in a loaf that already has a generous dose of barley and rye.  It obviously worked, so hats off to you.  To my eye, it looks as though you pushed final fermentation about as far as possible; particularly considering the grain bill.

Good to hear that you found the flavor enjoyable, too.

Thanks Paul.  Braver maybe, but not wiser.  Based on some of the observations from Dave and Benny (and now yourself), the soft white wheat was maybe a poor choice.  Who knew...  all whole grain wheats are not created equal.  Have to add that one to my learning curve.  😁

I’ll definitely do this one again with hard red wheat and probably bump it up closer to your 600g of flour.