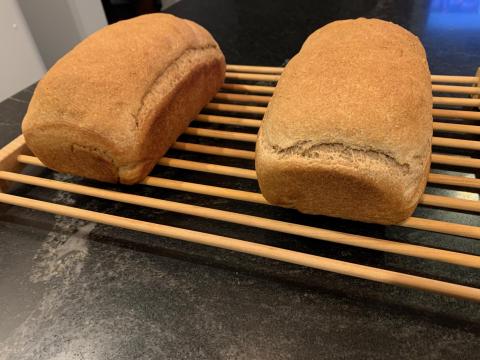 The last time I made this bread, I said I'd definitely make it again.  That was two years ago.  Two years!  At least I got back to it faster than MacArthur got back to the Phillipines.

Based on the prior experience, which was completely experimental, I made a couple of adjustments.  The first was in the grain bill.  I dropped the malt entirely and I swapped out 50g of the barley flour for 50g of rye flour.  The second adjustment was to bake the bread in 9x5 pans instead of 8x4 pans, which was a better fit for the dough quantity.

The revised formula is:

The process was unchanged.  Autolyse the flours, water, and honey (about 45 minutes this time around).  Mix in the salt.  Mix in the yeast.  Do three sets of stretch and folds at 20-30 minute intervals.  When the dough has doubled from its original volume, divide into two pieces.  Shape the loaves and place them in prepared 9x5 bread pans.  Ferment the loaves until they have nearly doubled, then bake in a preheated oven at 375F for 50-60 minutes until the internal temperature reaches 195F. Depan and cool on a rack, covered with a towel.

I like the addition of rye flour for this version of the bread.  It intensifies the whole-grain flavors without standing out as RYE!  The barley moderates the grassiness/bitterness of the red whole wheat and lends a certain fullness to the rest of the flavors.

The crumb, while firm, is moist and fairly open for a bread with 66% whole grain, half of which are gluten-free or nearly so. 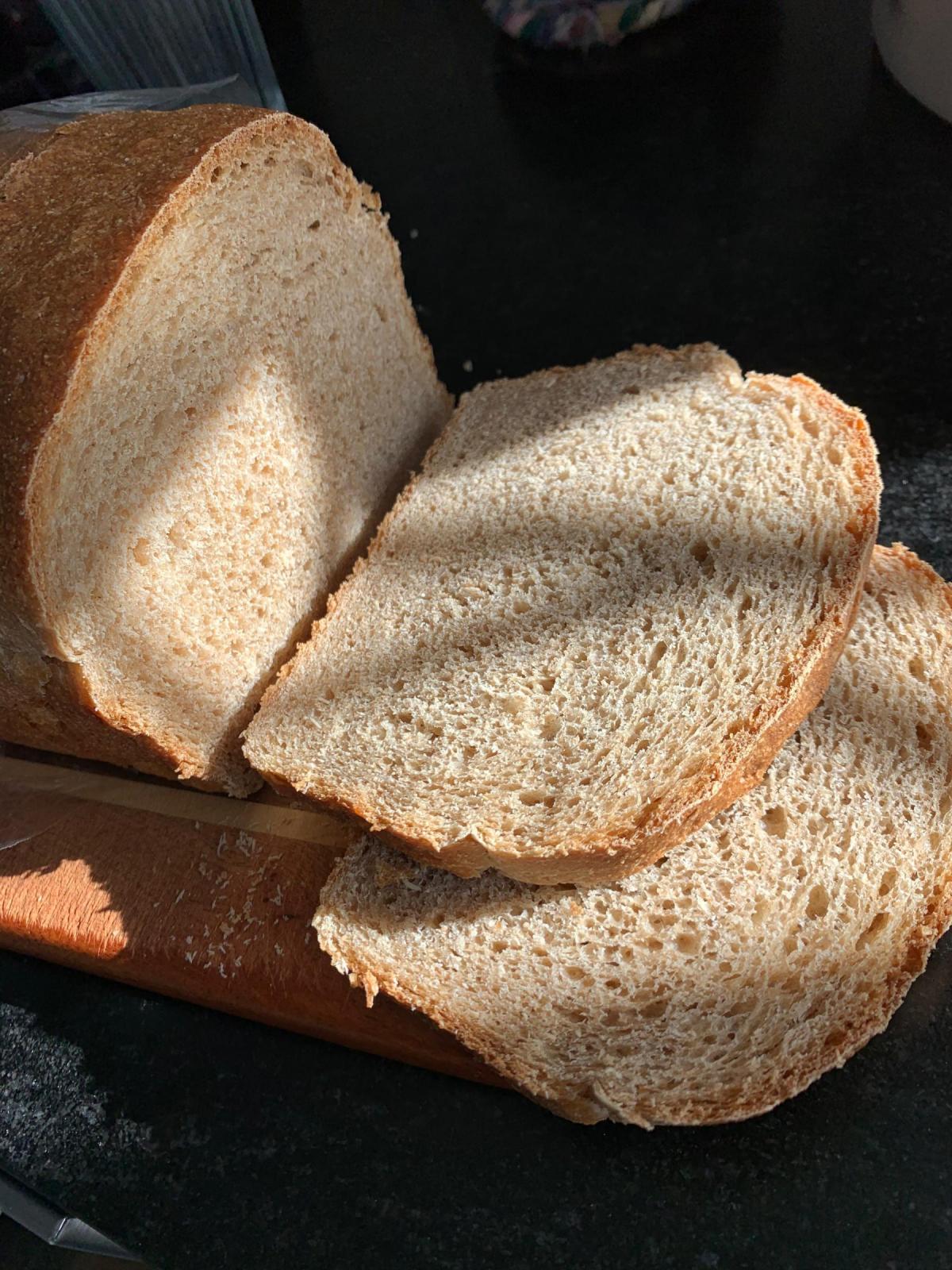 Definitely a keeper and I think that I don't need to do any further adjusting with the flours.

Hi Paul they look pretty good i think a dash of Rye brings a lot to a loaf  and as you say doesn't takeover just lends itself to taste of the finished product. Really nice even crumb and will be great for spreading the butter over either when toasted or for a nice fresh fully loaded up sandwich.

And toasted, too.  I'm quite pleased that I bundled it into the oven at the right time.  It's easy to over-ferment a dough with this much whole grain flour, which can lead to a very crumbly finished bread, considering that the barley and rye flours have very low gluten content.

And you don't have to wait two years to get to it, like I did.

Very nice sandwich loaves Paul.  Nice even crumb.  I haven’t baked with barley flour and I keep seeing it every time I go to the bulk goods store and think about buying it.  This might be a good introduction to barley flour.

pmccool
February 6, 2021 - 6:57am
This bread is pretty straightforward, Benny

It might just turn into your "gateway drug" for baking with barley.  While barley doesn't get much attention, there have been other TFLers who have done some limited barley bread baking.

But on the other hand there are quite a few of us that have harnessed Barley's great gift by utilising beer and stouts in their list of ingredients as well as additions of malt too. A remarkable grain, i'm quite keen to have a go at using spent grain recovered from the steeping process just need to put up a notice at the local brew shop perhaps.

I haven't played with spent grains from brewing.  There have been a few flurries of interest here on TFL from time to time, so one could dig around in the archives to get the benefit of others' experience.

Superb! I must try this formula.

I think you will enjoy it.

Paul - thank you for posting. It looks like a terrific bread! I've bookmarked it and will give it a try!

It's one thing to noodle around in one's own kitchen.  Seeing how the bread conforms, or maybe transforms, in others' hands will be interesting.

That is a beautiful bake.  The slices look so soft, and the barley flavor sounds very appealing.  I don't believe I've ever had it in bread before.

This is a sturdy bread, even though it isn't dense.  It has a nice chew to go along with the pleasant flavor.