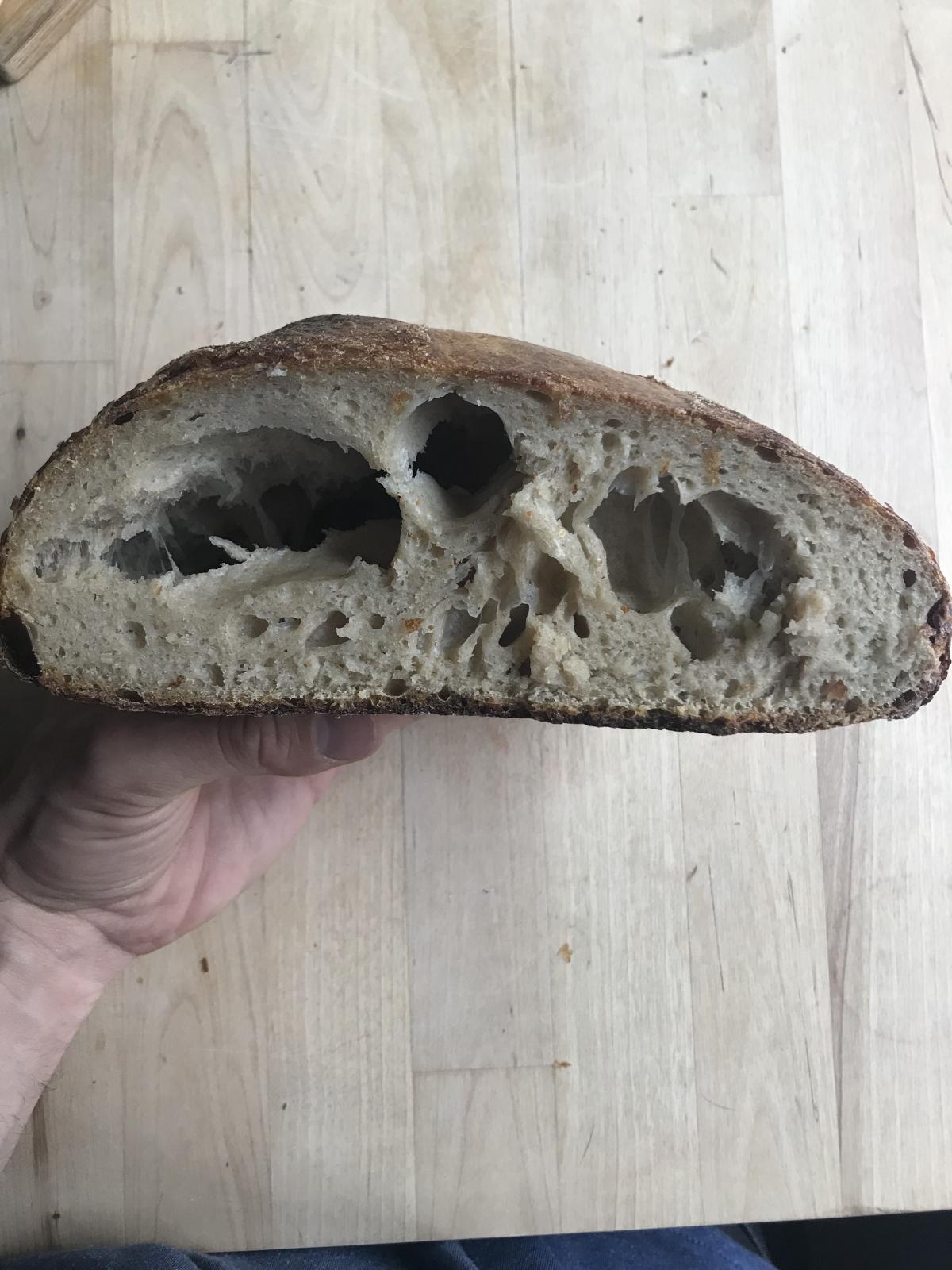 I'm at my wits' end with sourdough baking and am hoping for some guidance on what I'm doing wrong.

My loaves are coming out terrible! Massive holes, it can almost be an empty calzone, also no ear whatsoever, just flat and shiny. I've tried so many different recipes, read many forums and watched many videos, everybody seems to be saying contradicting things - it's underproofed, no it's overproofed, oven's too hot, not hot enough, etc... No matter what I tweak, it comes out bad... Always tasty and edible in the end, but getting really tired of these dense yet hollow loaves.

I've gone through many different recipes, but these days, I'm trying to follow the Tartine recipe (75% hydration), and I'm cutting it in half to make one loaf. Here's what I'm doing:

If you know the recipe, I'm following it exactly. If you don't, basically:

- I fed the starter, let is rise 20-30%, Tartine guy insists to use a young starter so that it's not exhausted by the time it bulk ferments. This time it took about 5 hours for me. Starter passed the float test with flying colors, could've probably used it as a life jacket.

- Autolyse, rest 40 min, add salt (I've experimented with adding a bit of Rubaud method, and a coupe slap and folds) , and boom, we're in bulk ferment.

- Bulk ferment: 5 hours, stretch and folds every 30 min, started getting a little bubbly on the sides of glass bowl, puffy, smooth, elastic, grew about 20%, all good signs

- Final shape as he does it in the book, looks just like the pics/videos, and into the baneton it goes.

- final proof in fridge for 12 hours (I've experimented with 8 hours, 18 hours, covered, uncovered). I do the poke test, and it springs back very slowly, so should be good.

- take loaf out of fridge and preheat cast iron Lodge Combo Cooker at 500F in my gas oven for 30min. (I have a thermometer which shows that oven actually runs about 30F hotter than what it reads on the dial, so I have it set to 470F)

- gently putting the loaf into the pan, scoring with a razor blade bread lame, looks like it sags apart sometimes after scoring. Scoring at a tight angle, just off of the center to "encourage an ear"

- Then for the sad part - I take the lid off, often looks flat, sunken-in at parts (so very sad). Then bake for another 30 min, which about 5 minutes in, it starts to puff up like a balloon, deceiving me into thinking it's a delayed oven spring, but it's really just a hot air balloon.

What am I doing wrong!? Please, somebody help.

Thank you so much! 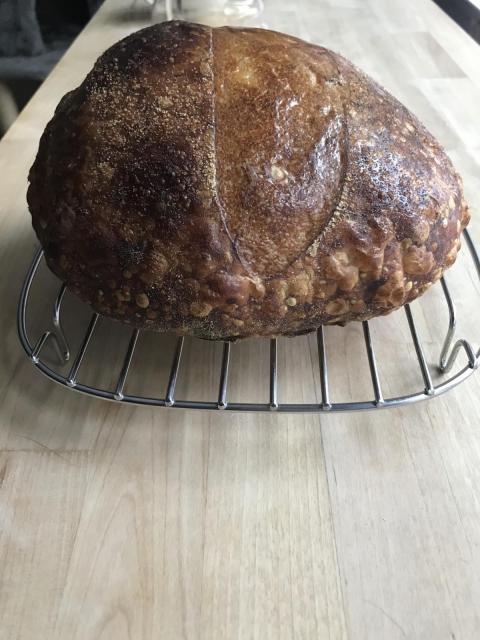 Your crumb shows typical classic signs of underfermentation.  Tight crumb with large tunnels in the upper half of the bread.  Because you are using a very young levain you’ll need to allow for a longer time in bulk than what you did, either more time or warmer temperature or both.  I believe your dough had a 20% rise in bulk, that is less than what most bakers allow here.  Most would say aim for at least 30% rise.  If you do 20% as Chad does you will need to allow for more fermentation after shaping at room temperature, the bench rest to allow the dough to ferment further.  Ideally you’ll give it the 3-4 hours at room temperature and then bake.  If you cold retard right after shaping and your fridge is cold say < 5ºC, then very little fermentation will occur and you’ll end up as you have with underfermented loaves.  So you just need to allow your dough more fermentation, some in bulk and maybe some in final proofing.

Benny,  I sent you a PM as well, but in reading your response, I had a few questions.  When you say that a bread needed more fermentation,  could that be in bulk fermentation, or final proof ?  That is,  if a baker went low on fermentation in bulk, then shaped and went a little longer than usual, can he make that up?  Or are the processes different ?  I am often at work or asleep during BF, and if when it is time, the loaf has only increased in volume 20% or less, I wonder whether I risk overfermentation and let it continue, or shape, bench rest, then reshape, and try for a longer proof?

I suppose we call it bulk fermentation because that is where the bulk of the fermentation of our dough should occur.  In general, if a loaf is underfermented, more fermentation should occur during bulk, so increase the time in bulk, the temperature of bulk or both.  Most bakers here aim for 30-50% rise in bulk.

The following pertains mostly to hearth loaves because a pan loaf is potentially a different animal. But what we’re needing to achieve during bulk fermentation is to get the dough aerated and build structure, enough structure that when the dough is shaped, it can hold its shape well enough to rise in the oven.  If the dough isn’t aerated enough, then it won’t have enough structure to hold its shape to be baked freeform without just being a pancake, pizza or focaccia.  So I don’t think you can fully make up during final proof for fermentation that wasn’t done in bulk.

Because a pan loaf has the support of the pan, you don’t really even need to do two separate processes.  You’ll see in my blog my milk breads.  I mix, shape then place the dough in the pan and then allow the dough to fill the pan and bake.  They only go through one fermentation but that’s all they need because they are supported by the pan and don’t need much in the way of structure.

Yes you’re right gluten development is part of bulk as well.  I should have been more clear about that, aeration and gluten development are necessary to build structure in our dough.  Some bakers will rely completely on bulk for the development of gluten doing very little to develop it manually.  An example of this is a no knead dough and relies on time for gluten development.  Others will aim to develop the gluten completely at the beginning of bulk by kneading it thoroughly or using a stand mixer.

I believe we call it bulk ferment because the dough is in bulk, i.e. not divided. Otherwise, in my experience, I agree to not cut the BF short lest you underproof.

Thank you Michael that is logical.

Benny, thank you so much for this very thorough explanation, it makes a lot of sense! I'm going to try a new loaf tomorrow, will try adding some time. I'll push the levain a little further, as well as the bulk and see how it goes. I guess I'm paranoid of overfermenting, are there signs to look out for to make sure I don't take it too far? Will keep you posted!

Here's what I did differently:

- Bulk fermented for 8 hours (71F is the temp of my kitchen) instead of 5 hours. It definitely grew and puffed up, but didn't rise quite as much as I would've expected with all that time, I would say it still rose only about 30%

- Final proofed for 15 hours instead of 12. Poke test looked perfect.

- When I turned it into the pan for baking and scored, it seemed a little wet and sticky and spread flat pretty quickly.

Maybe it over-fermented now? Thinking of trying to let the starter double in size to make sure it's very active, and then maybe cut down on the bulk time. What do you think? 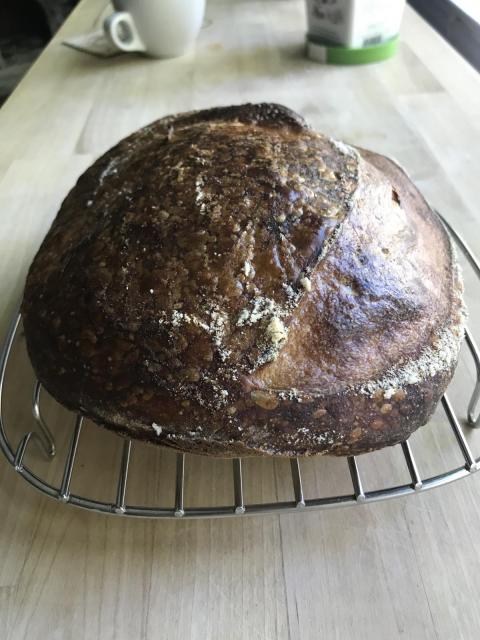 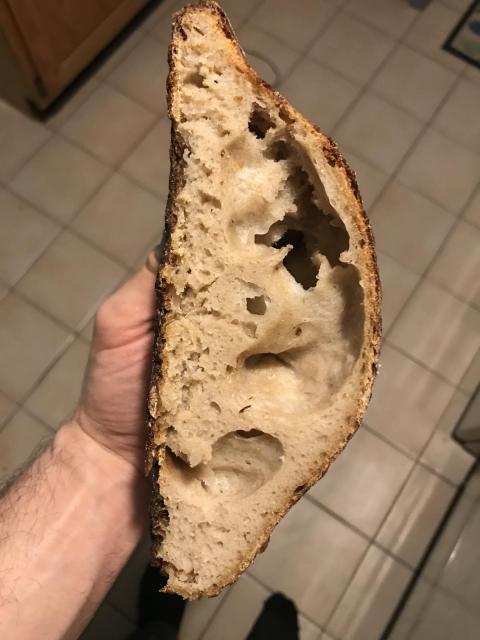 Let the starter double in size. I know Tartine recipe uses a young levain, but their starter is ridiculously active, and it's not a good way to start. Try to use the starter at or soon after it peaks - not before.

You’re using a very young levain, then doing bulk at a cool temperature and finally not giving the young levain enough time at that cool temperature to ferment the dough enough.  The crumb proves this.  If your starter is very mature and very active, I cannot recall if that is the case or not, then if you follow all of Chad’s instructions which included a much warmer bulk of 78-82ºF then you might have a well fermented loaf following all his instructions.  However, you’re not following his instructions closely enough.

When I use my very active starter to build a levain, I use my levain when it is mature at peak.  That levain will raise my dough much more quickly than a young levain.  Yet using that mature levain at what Chad calls 20% inoculation  of the final dough it would take about 6 hour at 82ºF for my dough to be fermented to a point that I would be happy with the crumb.  You’re only fermenting at a much cooler 72ºF this would add many more hours to bulk if I were doing it with my mature levain, yet you’re using a young levain.  It just won’t be ready even after 8 hours.

Got it! Will start another levain tonight, let it double and hopefully have a better loaf in a couple days. Will keep you posted.

Hang on, why don’t you allow it to peak before you use it.  My levain would be young if I used it at double volume.  Try using your levain when matured, so it has come to its maximum height and the dome is just starting to flatten.  This can be 3-4 x rise not just double.

Benito, I only saw your comment after I started the process, so I only let the levain rise a little more than double, I would say about 125%. Anyway I thought it would be an interest experiment.

It was my worst bread yet.... Similar results - flat, maybe not as large a cavity inside, but still a large hole, the crumb around it seemed a little better maybe.

It seemed more promising at first - the dough was developing more during the bulk, but I wonder if I took it too far? It bulked for 8.5 hours, this time in the oven with the light on (temperature 89.6F). Is that too hot?

By the seventh hour, it had risen about 30%, but I wanted to take it further. But then already by the next hour, it looked like it was starting to sink and be very wet/sticky. So I decided to shape it, even though it hadn't risen to the 40-50% I was hoping for. The dough was almost impossible to handle, very sticky, floppy, stretchy, I already knew it was game over.

So, here are my hypotheses ...

1) Was the levain still not mature enough?

2) Was the oven temperature too hot?

3) Is stretching and folding every 30 min during such a long bulk handling the dough too much, and maybe deflated it?

Without seeing it, I could be wrong on the issue, but if the crumb is still quite dense and there are those large tunnels again it is likely underfermented.  Your next one will be better if you allow the levain to mature before using it.  Again allow it to reach peak, not some predetermined rise, and just barely start falling.  Even if it starts to fall a bit more it will be fine, better to use past peak than before peak in my mind.

89.6F (32C) is very warm though. Maybe too warm? I don't know for sure, but I have a feeling that when I really try to push the fermentation by heating to ~30C with wheat bread the degradation happens way faster, and basically faster than fermentation... And it's really not worth it. Perhaps the enzymes in the flour get more active? So maybe that's what you experienced, especially considering you describe the dough as very sticky and impossible to handle? Maybe someone else knows better. I am not familiar with US flours though.