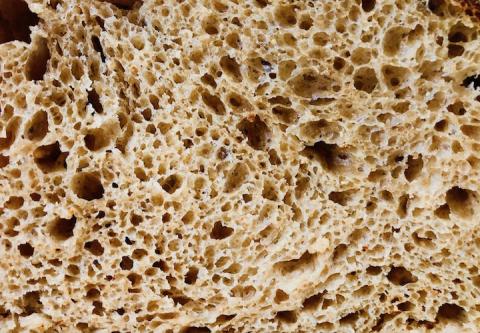 Here we report an experiment designed to increase a levain's natural yeast titre.  Possible* novel aspects are (1) an "Overnight" version of Raisin Yeast Water (ORYW) and (2) growing SD levain in undiluted RYW.  (*nihil sub sōle novum when it comes to bread baking but I don't recall seeing exactly this described before)

The day before preparing a dough, the water destined for the levain was measured into a pint Mason jar.   1 tsp honey and 1 Tbsp raisins were then added.  The jar was sealed, shaken periodically and incubated @ RT (~60-65˚F) over the following ~24h.  Next day, the raisins were removed and refreshed SD starter and flour were added.  The levain was grown to youthful maturity and used to make a 2kg, 60% whole wheat miche by our standard formula and process.

Overnight Raisin Yeast Water was pre-tested as a SD inoculum diluent by inoculating some with leftover starter and flour.  A water diluent control was included (an ORYW + flour control [i.e., minus starter] was unfortunately omitted).  The ORYW treatment ("RW" in the three time points shown) expanded faster and ended higher than the control.  This wasn't replicated or precisely quantitative (I now have Fermentation Tube envy, Benny), but confirmed that the ORYW doesn't negatively impede starter performance in terms of expansion (CO2 production). 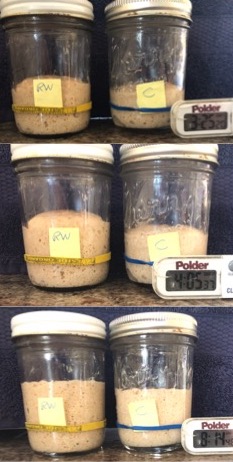 When ORYW was then used to dilute ripe SD starters for bakes, the resulting doughs rose abundantly and produced loaves with satisfyingly soft and lacy crumbs (first row below: last week, second row: this week). 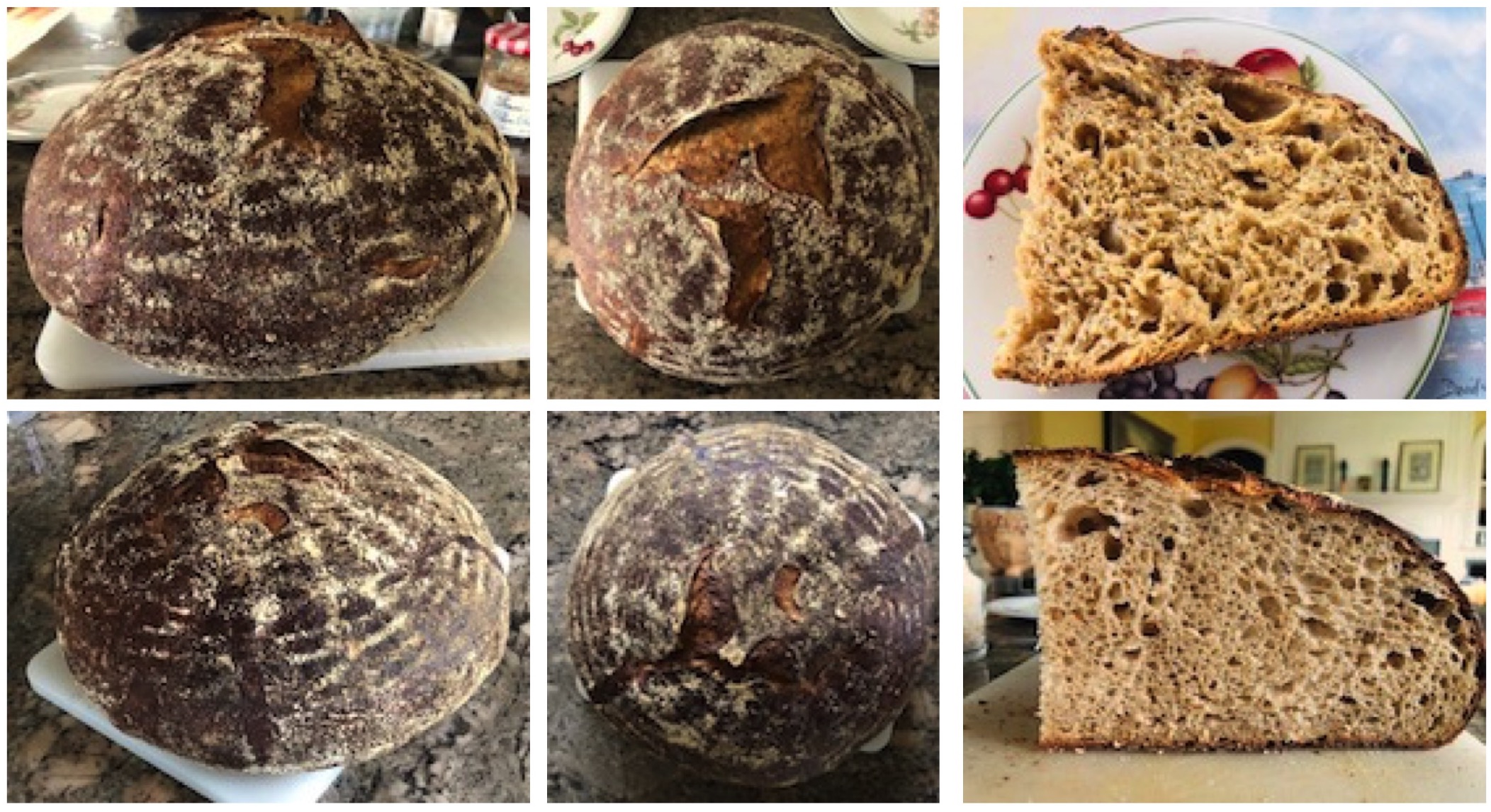 Spring has sprung here in New England and our household temperatures have climbed into the 60˚'sF.  The second week's ORYW trial was somewhat over-fermented owing to this compounding factor.  It would have been more timely to test ORYW+SD two months earlier when kitchen temps were ~10˚F lower and Messrs. Brod &  Taylor were struggling to keep the children warm.  That's when our doughs need extra encouragement.  To paraphrase the proverbial bottom line: Whenever one manipulates fermentation conditions, mindful vigilance of the dough's progress is essential.

These loaves' flavor was normal/excellent for our weekly 60% fresh milled whole wheat miche.  If I use my imagination, they are less sour, but perhaps only because I expect the added yeast to have competed with the flavor- and acid-producing bacteria.  Sourness normally builds over days but hasn't seemed as pronounced in these breads, which suits us fine.

ORYW can be effectively used as a SD starter diluent to build a levain, with salutary effects on loaf volume, texture and (if maximal sourness is not an objective) flavor.  Beyond the tests reported here, the outcome of this manipulation will be subject to many variables including starter, honey and raisin amounts and diversity as well as ORYW incubation time and temperature.  It is entirely possible that the yeast provided by another honey, raisin or fruit source (e.g., a higher titre, long-term RYW culture) would vanquish SD microbes in a starter, resulting in effectively a pure RYW levain.

Glad to see someone else that likes the RYW and SD combination.  I started using it a month or so ago.  I knew my starter was "young", but I was pressed for time.  I used RYW as the hydration for my levain build that day and liked the outcome.  Since then, I've used both RYW and SD in almost all my bakes.  I agree that it adds flavor, and while I don't have a ton of SD experience, I think it does make things less sour.

That is a great write up Tom and gives me an idea that I’ll have to try out on a 100% whole red fife loaf in the future.  Now it also makes me wonder about the pH of the levain that was made with Yeast Water as the only water in the levain build. Now I really wish I had a better pH monitor probe to do these measurements because it would be nice to know if the dough at the end of bulk has a higher pH than what I would have expected.  But based on your report that the bread is less acidic I gather you feel that the ratio of LAB to Yeast in the final dough is lower than what we would expect for a totally SD loaf.

Like I said, nothing new under the baking sun and I had no doubt someone, probably here at TFL, had done this.  Glad it's working for you Troy.  I've used ORYW two weeks running now and see no reason to abandon it yet.  I'm pretty sure the miche quarters coming out of the freezer are less sour than they usually are when I haven't used RYW in levain.  And softer when thawed too.  Possibly.  Need more replication on that.

Benny, my intuition says the ORYW would not significantly affect the pH of the levain.  It would be slightly acidic owing to the yeast metabolism and possibly solutes leached out of the raisins.  But it would be weakly buffered and more subject to buffering from the fresh milled flour and starter.  At least that's my guess.  And it's also my intuition that the yeast introduced by the RYW will sufficiently compete with starter LABs to reduce the titre of the latter, although it probably risks oversimplification to assume a zero sum outcome when intermixing two different microbial communities.  One advantage of just overnight RYW is that it's a weak influence, not a high titre (or high potency like CY) influence.  I'm not looking to make a RYW-only bread.  Just want to gently cheat up the yeast a bit.  Seems to work.

I guess I need to pull out my pH meter and test the pH of yeast water.  I’ll need to pull out my bottle from the back of the fridge and use a bit to make a fresh batch, assuming it can still inoculate a new one after so many months.  I could make two small levains one with filtered water and the other with the refreshed yeast water.  I could test the pH at mix and then at peak.  I have some apples in the fridge hmmmm.