Is this under proofed?

Is this under proofed? 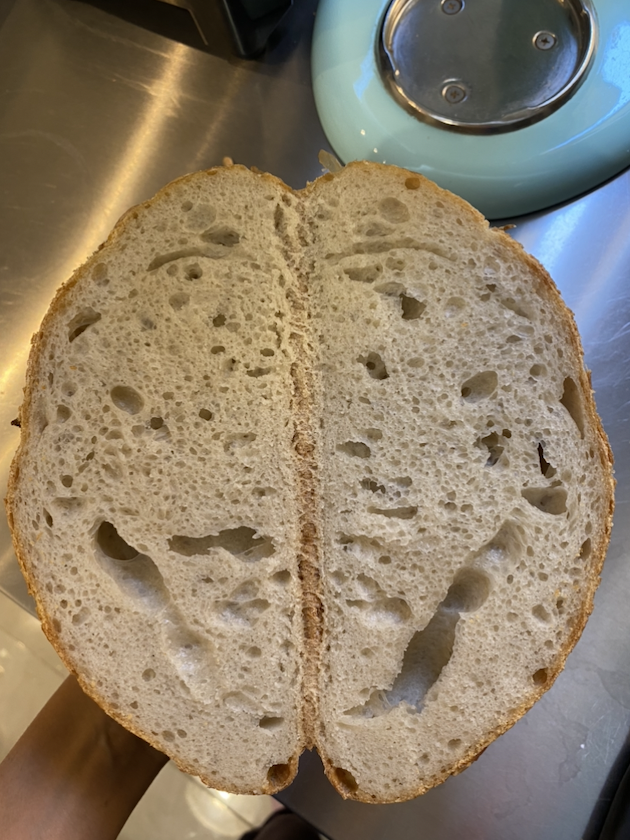 Hi everyone, I have been watching a lot of sourdough videos and for the longest time I through that this loaf is over proofed. But then I watched a video and the guy described the dense parts as a sign of under proofing. So is my bread under or over proofed? This is a white and rye bread.

It is either way under bulk fermented on the front end or way over-proofed on the back end. I believe it is under-fermented. I do not interchange "bulk ferment" and "proof".

While the crumb shot can tell us a lot, the recipe and how the dough was handled (with timings)helps with an accurate diagnosis.

Yes I agree, this is underproofed or more accurately underfermented.  To assess the proofing/fermentation ignore the big holes first.  What is the crumb like, are the alveoli in the crumb tiny and tight then more likely to be underfermented.  Is the crumb overall actually pretty nice and not tight then not underfermented.  Then the large hole characteristics next.  Are they large tunnels through the bread and not necessarily immediately under the crust?  This along with the tIg hot crumb equals underfermented.  Are the large holes immediately under the crust?  Do these large holes show in them signs of gluten breakdown with thin broken gluten strands?  Then this points towards overfermented.  Then look at the profile of the loaf decent oven spring or excessive oven spring is more associated with under proofing whereas flat profile is more associated with overproofing.

This is such a helpful diagnostic protocol/process. Love it.

Thank you sooo much. I always tried to "fix" my loafs thinking they are ovenproof or over fermented. And just now I released that every single loaf I made is under proofed Lol. Thank you Again, really excited to bake again!

Same story here, at some point I realized most breads I had baked before were actually underfermented, while before I thought they were over! For me I think it was also a combination with insufficient gluten development, which, despite underfermentation, caused the dough to spread out and not get a good spring, which is otherwise attributed to overfermentation.

I think my first year of baking everything was underproofed either a little or a lot.  Then each time my starter got sluggish and I hadn’t started to use a aliquot jar everything was underproofed.  Now as I’m trying to push bulk I’m going the other direction and overproofing.  Although very frustrating it has been educational seeing it in real life rather than just photos.