My workmate made this sourdough, it is an 80% rye sourdough.

She baked it about 25 minutes in a deck oven.

It has a underbaked (gummy look) look around the outside below crust on the top and bottom but the middle looks baked.

We are just wondering what caused this? 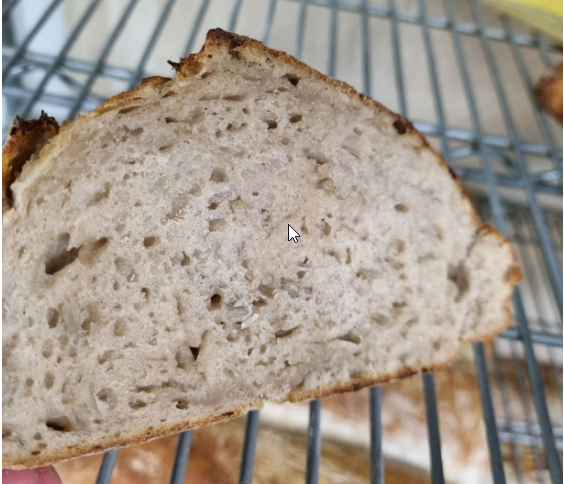 It would be helpful to know more about the formula, ingredients and process because those details would help us troubleshoot the problem more effectively. Also, the crumb looks very light in color for 80% rye flour. Absent those details, I could suggest a few possibilities: First, the bread may be under-baked. A 25 minute bake seems pretty short, but we don’t know the oven temperature, hydration, or size of the loaf. Second, the bread may have been sliced too soon. In high percentage ryes, it can take a day or two for the crumb to stabilize. If you cut into it too soon, some gumminess might result. (This should not be an issue with breads containing less than 50%-60% rye flour.) A third possibility is that you’re seeing the result of what is known as a starch attack. In rye breads that are not sufficiently acidified, amylase enzymes can cause the starch in the flour to break down during baking and damage the crumb structure. The acidity would have come from the sourdough, but we don’t know what percentage of the total flour in the recipe was fermented as sourdough. Hopefully, I’ve provided enough clues for the baker to figure it out. If not, others on the forum might have other ideas, in which case more details would help.

Thanks for a very detailed answer, that looks very helpful I will send her your reply. I'm not 100% sure on exactly how she baked it otherwise I would of put more details but I will ask her and write them up.

Interesting to know high percentage ryes can take 1-2 days for the crumb to stabilize. She would of cut it when it felt cool enough (within 2 hours) so cutting it too early was most likely a problem.

And that's interesting about stach attack, I'm not sure about that one. For this bread we usually bake about 8 or 9 (750g each) of them in a deck oven at about 260 degrees Celcius. Hydration being around 73% and its over 45% sourdough starter we put in. And it's about 6 hour from mixer to oven. (around 3 hour bulk ferment, then mould, 30-40 minute rest, remould then final proof) But we all do it a little bit differently so would have to ask her her process.

I'm still thinking about the bake time and temp. It sounds like that could result in a crust that browns too quickly and looks done before the interior has a chance to fully bake. That said, I'm not one to argue with success and it sounds like this is a bread you bake fairly often and with good results. With that in mind, it seems just as likely that some unknown error was made – maybe someone forgot to tare the scale or the oven was more crowded than usual – and it won't happen again. If it does, then you might want to look further into some of the possibilities I mentioned. Good luck!

When you see gummy areas throughout the cut, it's because the  loaf is underbaked. Either the temperature was not adequate or the time.

Gumminess at the bottom crust alone is due to lack of acidity in dough, might be due to the starter handling or fermentation conditions. Or due to rough handling of loaves after baking, throwing them hard, etc

Gummy areas under the upper crust (not  just at the bottom) in  rye breads are due to shaping errors. When the dough is divided and shaped it should be worked more thoroughly so that it is equally dense throughout and is shaped properly.