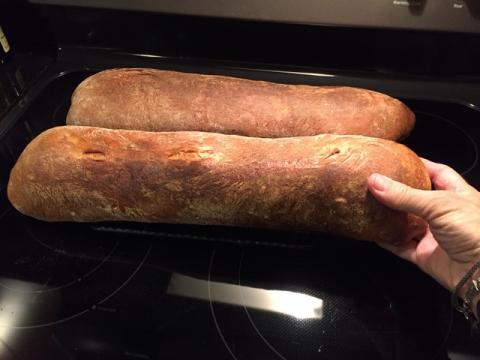 This is a 76% hydration ciabatta modeled on that of Scott McGee.    Unusual in the low hydration and that he shapes these.

Dinner the other evening with friends for “Sunday macaroni and gravy”, which may be an Americanism for pasta with tomato sauce.  Also includes sausages, meatballs and ribs, all cooked in the “gravy”.  I hadn’t made a ciabatta in a while, so it was off to the races as part of our contribution to dinner.

Today I’m once again seeing our visiting-the-U.S. London TFL compatriot Abe (in olden days "Lechem" and even older "A BakEr").  So I thought that I’d bake him one too.  But I wanted to bake something bigger.  Bumped up from 500g to 750g each, they are pretty easy to make, The biga was made the evening before and then warehoused in the refrigerator until mix time.  I’ve tried the Jason Molina Cocodrillo ciabatta quite a while back, and although it is a cinch to make, the flavor is lacking, so I ditched the effort and formula after two consecutive trials.

These were stretched out long enough that I had to load the baking deck sideways instead of head in.  13 minutes with steam, 16 minutes after, and 3 minutes of venting.  These could have gone a few minutes more.

If you are a fan of the super open ciabatta crumb that mice and small children can fall through, this isn’t the formula for you.  But it is a ciabatta in every way, with modest open crumb,  thin crisp crust, and a light as a feather crumb. And makes fabulous toast. 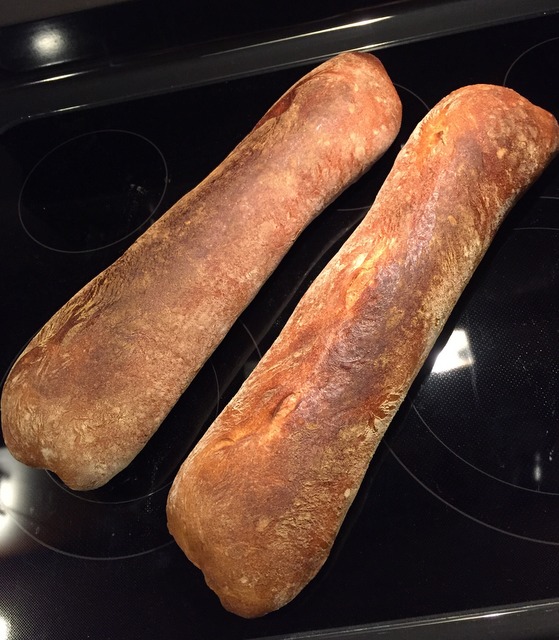 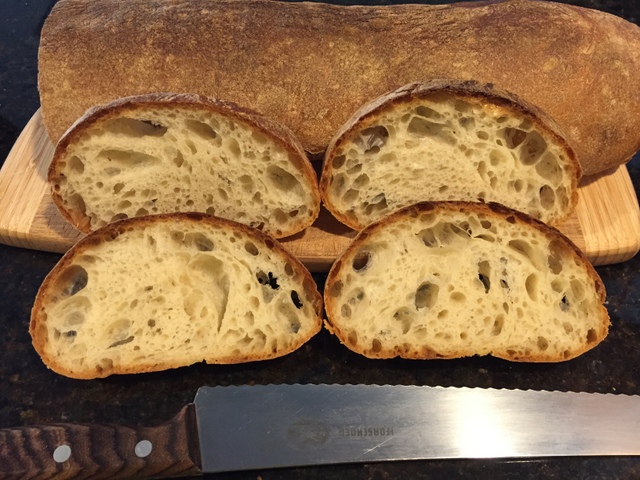 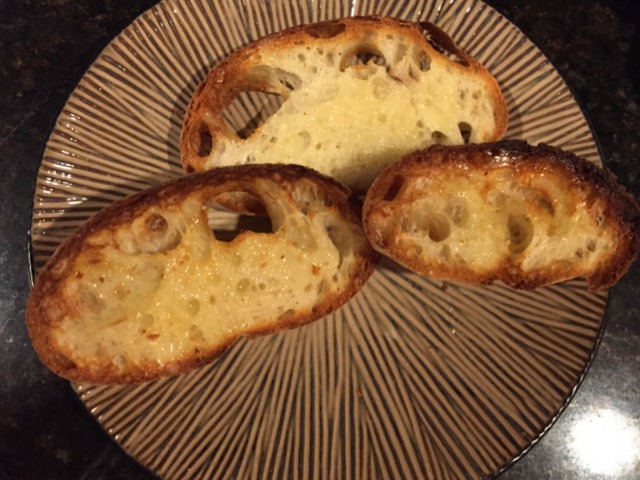 Enjoy your visit with Abe.

The least "exciting" of the visits, just a lunch date and trip to Laurenzo's Italian Market on the hunt for any interesting flours for Abe to truck home.  Laurenzo's is where I buy my semola rimaccinata by the (multiple) bucketful.

This is one big baguette. Just spent a lovely day with Alan and Miriam, thank you both, and got to bring one of these home. I shall be enjoying this for a lovely continental breakfast tomorrow. Seems like I've also got a lovely crumb waiting for when I slice into it.

As always it's been a pleasure Alan.

the majority of the other Brobdignagian ciabatta.  This is absolutely the easiest and best ciabatta that I've yet made.  Fabulous toast.  So it will remain on my short list.

Until the next time, here, or on Brick Lane for some beigels...

Alan, you are not capable of producing a bad loaf.  Wish I knew you when I used to live in Miami (Brickell Avenue).  On the other hand, it is a mighty odd-shaped foot that can fit into the shape of this ciabatta.  What kind of slipper is that?!  Thanks for posting.  (Abe, are you open to visitors?)

"not capable of producing a bad loaf.  Wish..."  Wish is the key word in that phrase.  Of course I have the occasional clunker, although fortunately, they are few and far between.

Just had dinner Saturday evening with relatively new arrival acquaintances who are currently holed up in the Icon until they find the "right" place to live down here.  We moved here from Portland at the end of 2011.  The whole Brickell scene is a madhouse with unfettered housing all going 40 stories up everywhere on that plot of land.  Our uncle has been down this way for 50 years and says that he recalls a time when all of Brickell was a "jungle/swamp" and you just about couldn't give the land away.

I'm planning on hollowing out a ciabatta, painting it white and using at as a phony cast so I'll get sympathy from the masses.