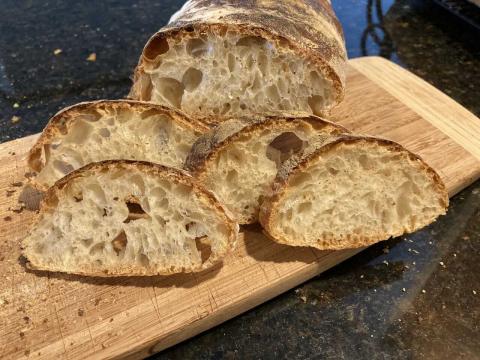 Now my second post of a bread from the Kingdom Bakery videos.  The prior was for a polenta based bread.  And his method of mixing and folding this dough had me curious enough.  Also this employs a poolish, something I hadn't done before with ciabatta, as it was always either biga or levain.

A third curiosity for me is the low hydration.  At 73% this is certainly the lowest hydration ciabatta that I've ever made.  And it all went along smoothly. Of course with learning my way though this.

I would have rather had shorter length loaves, but that will be corrected, along with other minor corrections, the next time.  I already like this method and formula.

A very soft crumb, and an extra-crunchy crust.  Just what I like!

Ed. The dough is actually 76% hydration with the consideration that the oil is a liquid and is to be included in the overall hydration. 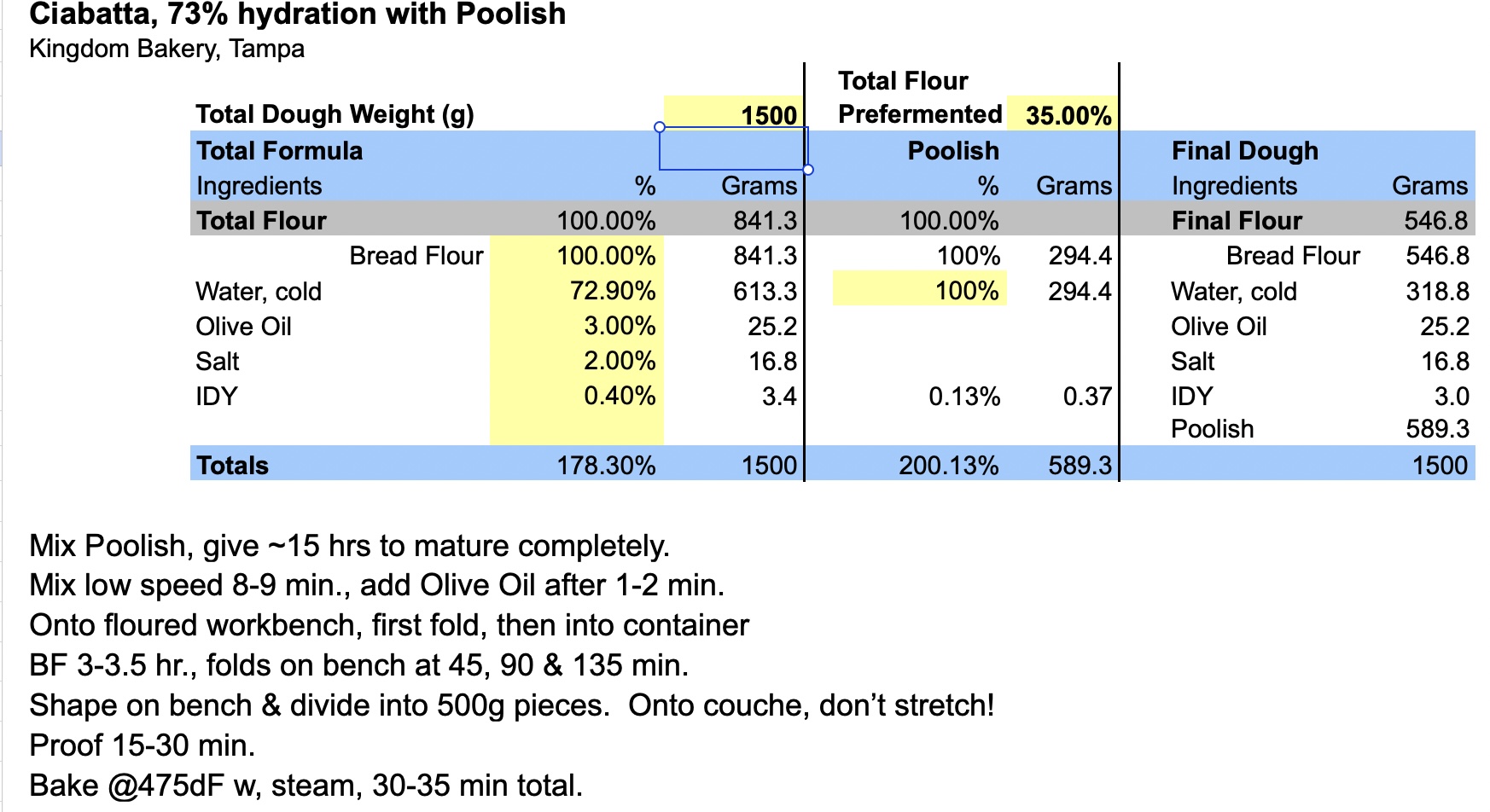 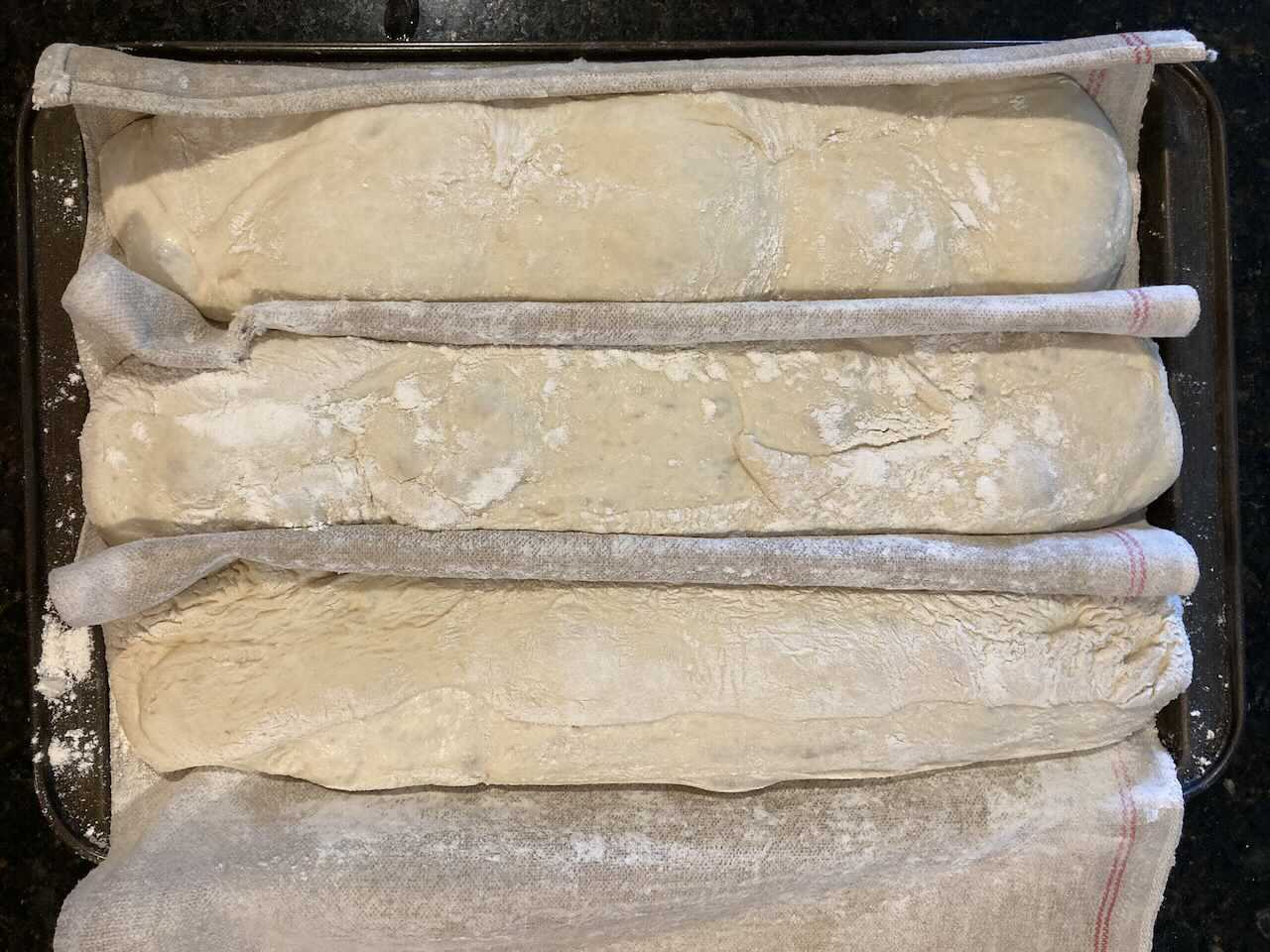 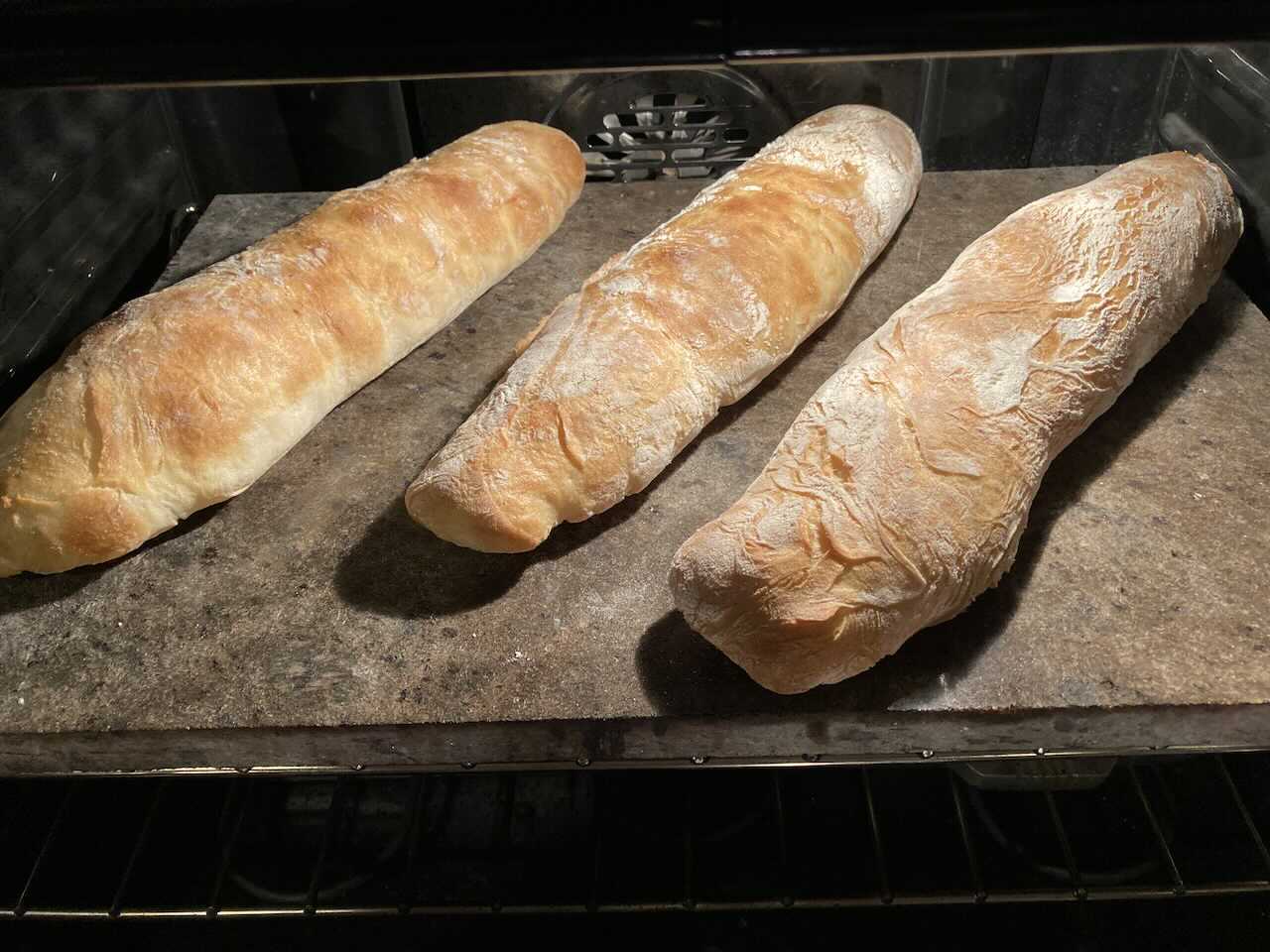 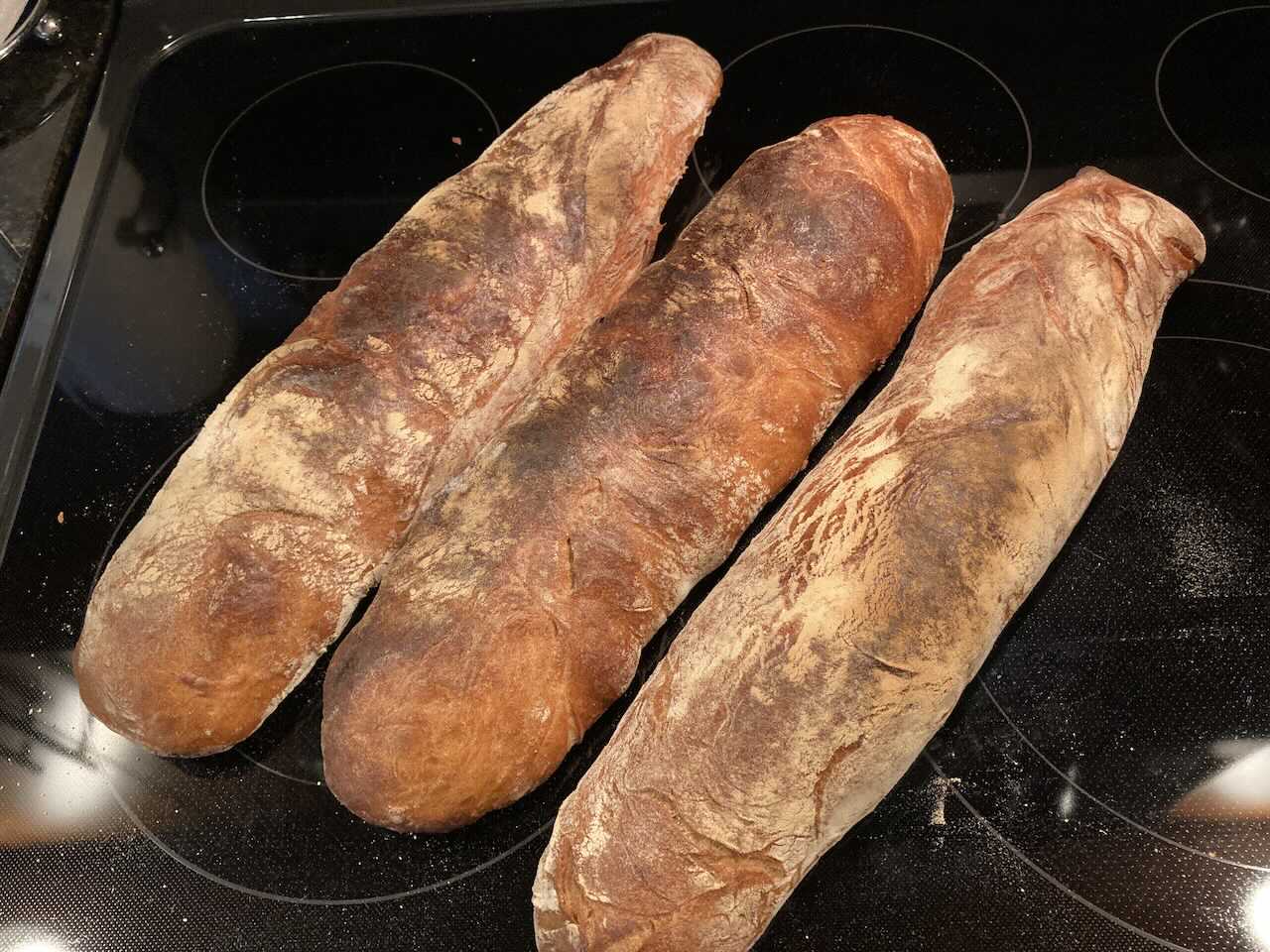 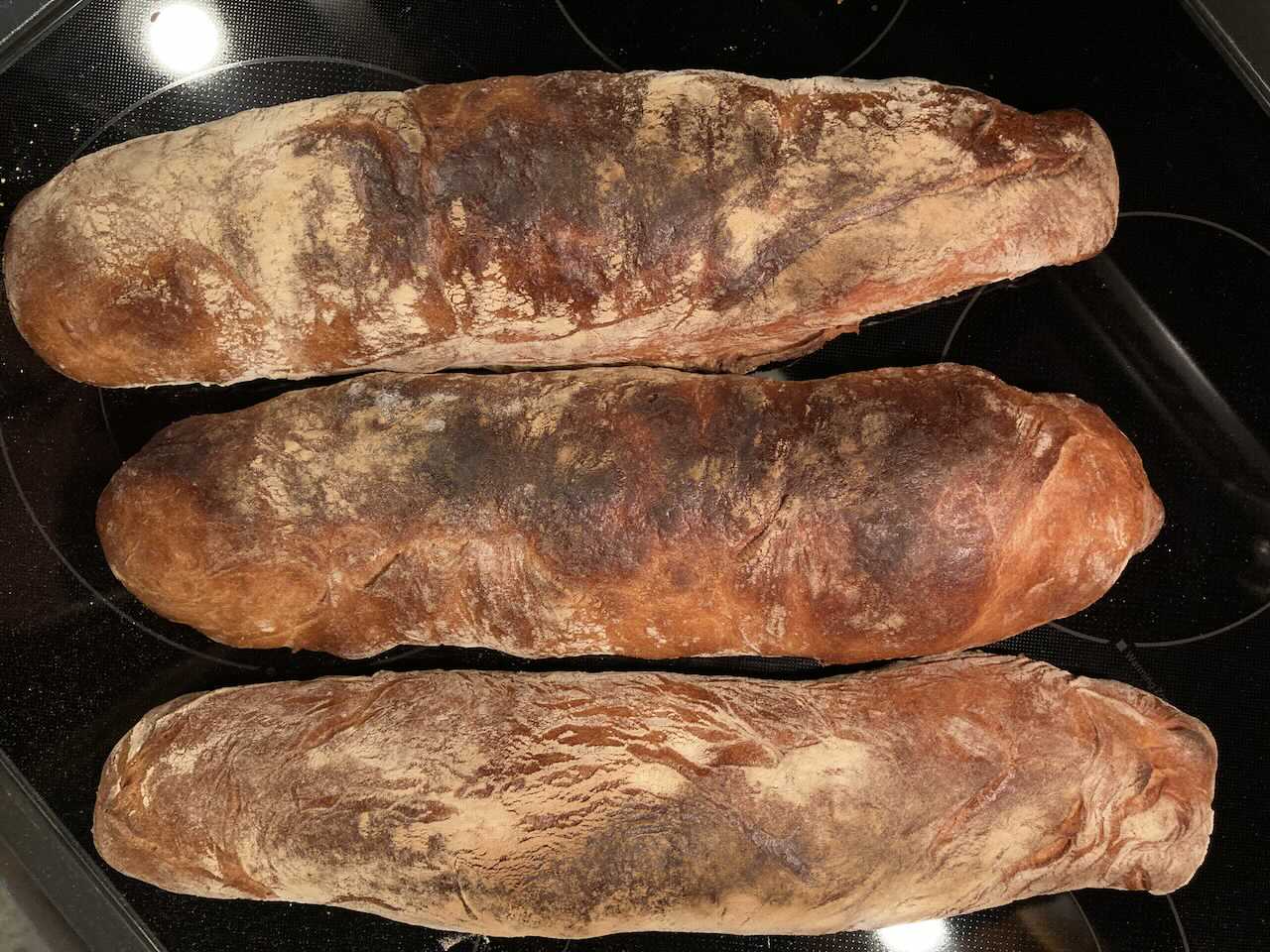 Nice ciabatta Alan, interesting as you say how low the hydration is on them.  I too have never used a poolish at least that I can recall.  Very nice crust and crumb.  I like your usual dark bake for more flavour.  You remind me that I never did bake a decent ciabatta.  You may recall that was the last time my starter got super sluggish and I had a horribly underfermented ciabatta.  I still instead to try ciabatta again at some point.

is ~78% hydration and that is low.  I've never done a bench fold on ciabatta before and especially goopy is the first one directly out of the mixer.  4 folds each 45 min apart with a final 45 min BF before divide.  The oven better be ready as the proof time on this formula is quite short, and I fired up ol' Betsy when I did the final fold, and slipped a Sylvia steaming towel in when I completed the divide and "shape".  But everything seemed to work impressively fine.  This one was likely baked a half shade too dark, although it is fine by me.  And I'm unsure whether I've sen any ciabatta employ a poolish.  However, the proof is that it helps creates the right dough for the bread.

Perhaps, as with my Scott MeGee version, I'll also convert this to a levain based dough.  But for the moment I'll stick with the formula as is...

Very nice ciabattas. They have a good shape and crumb. Hamelman has two with commercial yeast; a stiff biga and a poolish, both are 73% hydration. I love them both, but I get a more open crumb with the poolish version.

I've likely baked more than a dozen breads from Bread, many of them on my "most favored list", but never his ciabatta.  In contrast, I've likely made five dozen breads from other sources not in hardbound, but rather from posts on TFL or elsewhere on the internet, as with this one.

At this point, I probably have ten ciabatta breads in my notebook, but none from Bread.  This is the only one that

And I welcome both changes.

BTW regardless of its huge popularity on TFL over the years, hands down my least favorite has been the Jason's Cocodrillo version.

Wow, they look really good Alan! I have also seen some of the Kingdom Bakery videos, and have been thinking about trying his ciabatta formula. I wonder how his timings worked out for you. Was the suggested 3-3 and a half hours enough for the bulk rise? On the video the dough didn't seem to rise that much during bulk, and for a ciabatta it looked a bit underfermented to me at the dividing stage. If you followed his timings, I wonder how much rise you got. Did the dough double in size at the end of the bulk fermentation? Also, have you tried the formula with regular stretch and folds in a bowl instead of bench folds? I am a bit hesitant to apply bench folds for such a sticky dough, and I wonder if it actually makes a difference.

Are you planning to try out some of the other Kingdom Bakery formulas? There are some intriguing recipes there, like the ones that use poolish and levain at the same time, e.g. his rustic baguettes.

which is a consistent 78-80dF, so my timings may be off for others.  Among the things that is a bit bothersome, is that baker's kitchen temps can vary widely, and often times, as with the Kingdom videos, there is no indication of the BF ambient temperature, if I recall correctly.

Okay, to get to the point!  The BF in his video certainly looks like it had the better part of tripling between when he first loaded it and when he extracted it for divide.  My dough did approx. triple over the three hours of BF.  The dough definitely shows a lot of maturity and development over those three hours.  As mentioned elsewhere, I have a fat handful of other ciabattas that I've made, and the BF time seems to be pretty consistent across them all - to me and my kitchen environment.   What surprised me was the very short proof time, but it seemed to work out okay.

I was also leery of dumping the just-mixed dough onto the countertop to do that first goopy fold, but if not now, then when?  And it went fine.  And with each subsequent fold the dough strengthened and became more manageable on the bench.  But along the way I started to make mental notes of what to do the next time.

For how I perform tub folds, you might want to look at this...

I don't know whether I'll try other Kingdom bakes, I just happened to run across this two days ago and had to get on the stick, as the last of my current stock of bread was winnowing down.  Mr. Hamelman also has a double preferment bread, which I've made a few times to my great satisfaction.  It's in his book Bread, but nothing beats having the visual to refer back to.

Thank you for the quick and thorough response, and for the great tips. Varying kitchen temperatures are indeed an issue. That's why I was wondering about the actual amount of rise you got. Now I know I should look for about tripling. It was hard for me to judge the volume increase in the video, but thanks to you, I know now that I should let it triple or so instead of watching the clock.

I might try the bench folds, but there is another aspect of it that bothers me, besides the fact that it makes a mess on the countertop. Each time he folds the dough, he puts a liberal amount of flour on the counter for easier handling. All that additional flour goes right into the dough, which messes up the initial hydration a bit, I think. Maybe using a bit of water on the counter, as you have suggested, is better because 76% hydration (including the oil) is not that high for ciabatta, and the dough could probably take a little extra water.

I do have an electronic copy of Hamelman 's Bread. I have never come across his double preferment formula, but now you made me curious, I will look it up!

The crumb is super nice!

Hamelman's book has a poolish ciabatta formula with 73% hydration. No olive oil though.

Noted above with Gavin's comment as well.  I'm not necessarily a proponent of oil in my breads, preferring to stick to those whose lifeblood center almost exclusively around FW&S, but it seems as though a number of ciabatta carry oil as an ingredient.

* I corrected the post to indicate that the overall hydration is actually 76%, which includes the oil.  Mr. Hamelman indicates that room temperature liquids are to be taken into consideration for the hydration percentage.

73% hydration makes sense to me when you consider that 35% of the flour (in poolish) was fermented for 15 hr. That’s a lot of weakened flour.

What kind of flour did you use? I’m thinking KAAP not KABF. I tend to prescribe to Hamelman’s, “less protein - better bread” for flavor and texture.

What do all of you think?

with an update note placed in bolded text to indicate so in the post.

Bingo - KAAP.  I keep a bag of Pillsbury-type "bread flour" around for occasional use, and have never bought KABF, so no experience with it.  But since starting to buy KAAP on sale a few years back now, and subsequently in larger bags from places like Costco, that has been my almost exclusive go-to white flour.

Nice slippers Alan. The short proof is surprising but the results speak for themselves. Ciabatta are like geodes, their true beauty is hidden until you slice them. I am worried for your starters sake what with all this IDY being used lately;-)

Battle of Bozeman Field, 1485, effectively ending the War of the Roosters.

Starters are well maintained, and it is fairly likely that I'll be converting this keeper of a formula to a levain version soon enough.

"Ciabatta are like geodes, their true beauty is hidden until you slice them."  This is a truely genius statement that should be hung above the ciabatta display in every bakery that sells them (good bakeries, anyway).  I'm finding a way to steal it, and I ain't payin' ewe nary no royalties neither!  When you look my profile up on TFL, it'll be there!

You can have it. I got a million of them as some guy maybe named Richard said or was it Henny Youngman 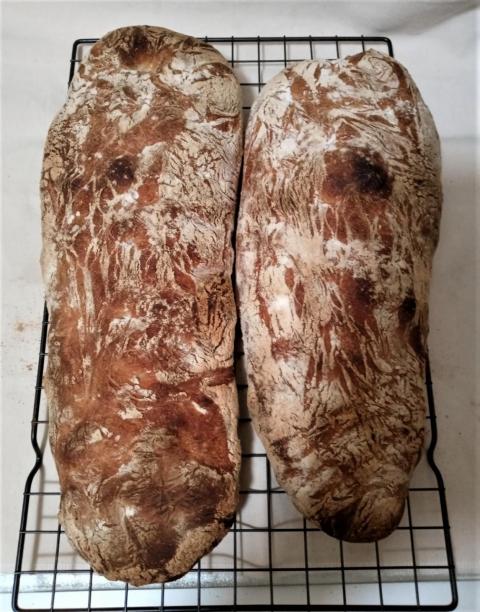 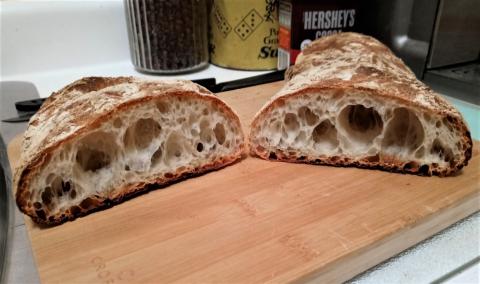 I baked these (+ 2 more) yesterday. Made mine well done, to taste. Fabulous bread. I have to mention that love his videos - he calmly goes about his business and methodically takes you thru each recipe from start to finish. Personally, I thought the hydration worked out wonderfully judging by the crumb result.

Perhaps a bit too "holey",  but will make a great sandwich or toast cut horizontally.

I've baked a few of his breads and I really like his polenta levain bread.  I like his style but feel he's a bit too slow getting to the point.  If you haven't checked out Scott MeGee's ciabatta on YT, I suggest that you do.  That is my go-to ciabatta.  He also has the best croissant walkthrough that I've yet seen.

Thanks so much Al. I'll definitely take a swing at McGee's version. I still haven't worked up the courage for croissants. I've made Pain Chocolat, but that isn't quite as daunting.
You're right about the sandwich, btw... :) 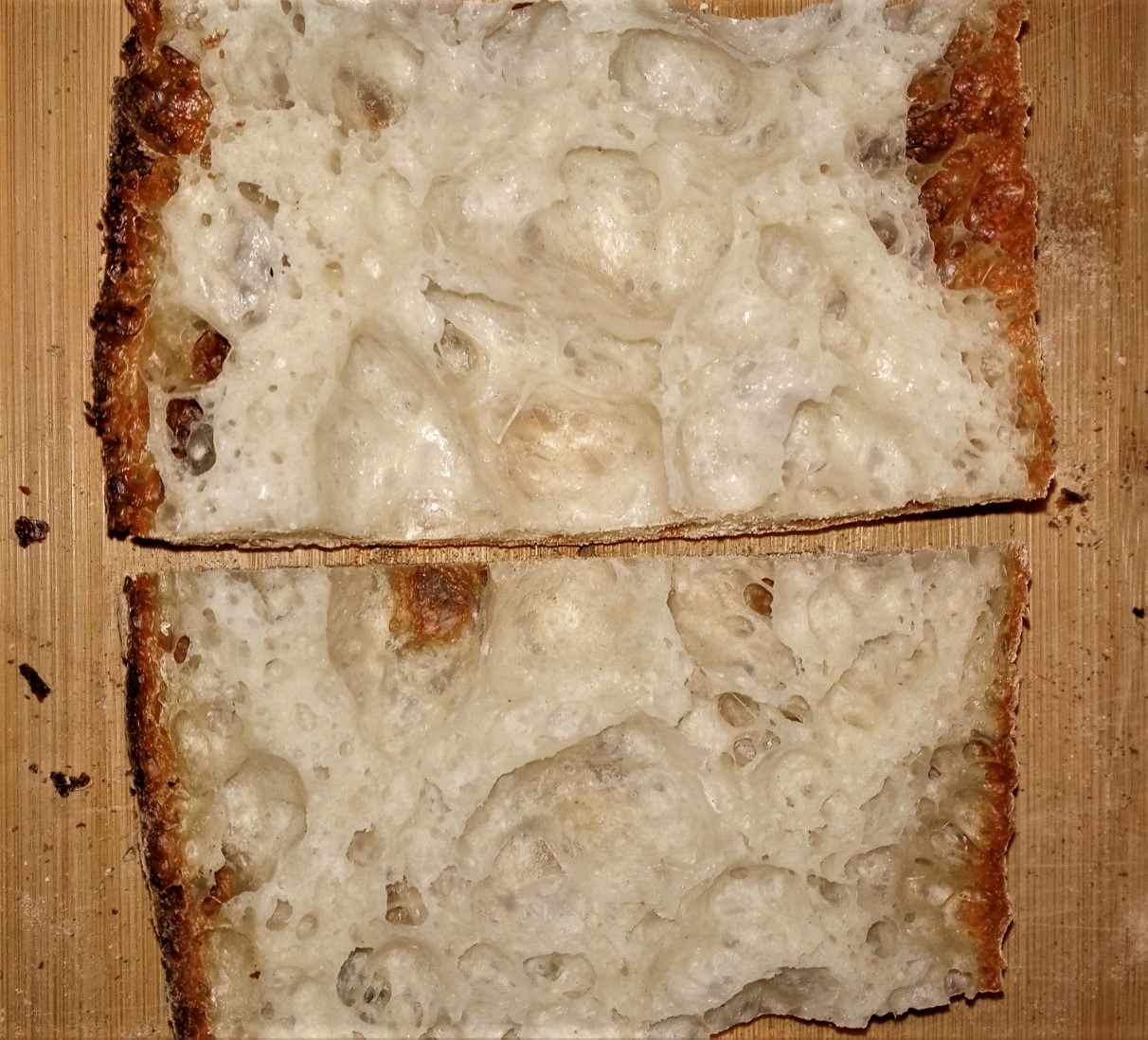