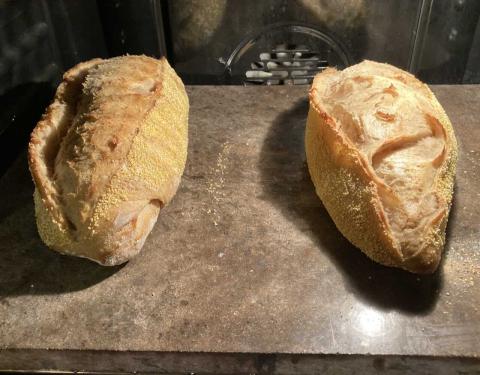 Came across this  YT video and thought I'd give it a whirl.  Trying to spreadsheet a formula from the video's posted percentages and amounts, and nothing really meshed, so I had to massage the spreadsheet for a while to get the amounts into percentages.  And he is off by more than a very small amount on the hydration and minor amounts elsewhere.

Once that was saved and printed, off I went.  The formula creates a quite sticky dough which should, according to the baker, double and become soft and billowy within ~2-3 hours of BF time.  Mine barely moved.  So I threw it into the refrigerator, for "later".

And went back to the formula, changed a few parameters and ran it again later the same day.  This time I cut down on the hydration, bumped up the WW to 20% and upped the PFF to 20%.   Less sticky, but same BF result, only with a little more volume, but nowhere near doubled.  Another into retard.

Both were shaped this morning and sent back to retard once more.  The second batch was less sticky and easier to shape.  2 consecutive bakes as these are too large to place all 4 across my oven deck.

The pair with the double score is from the first batch, the single score is the second batch. 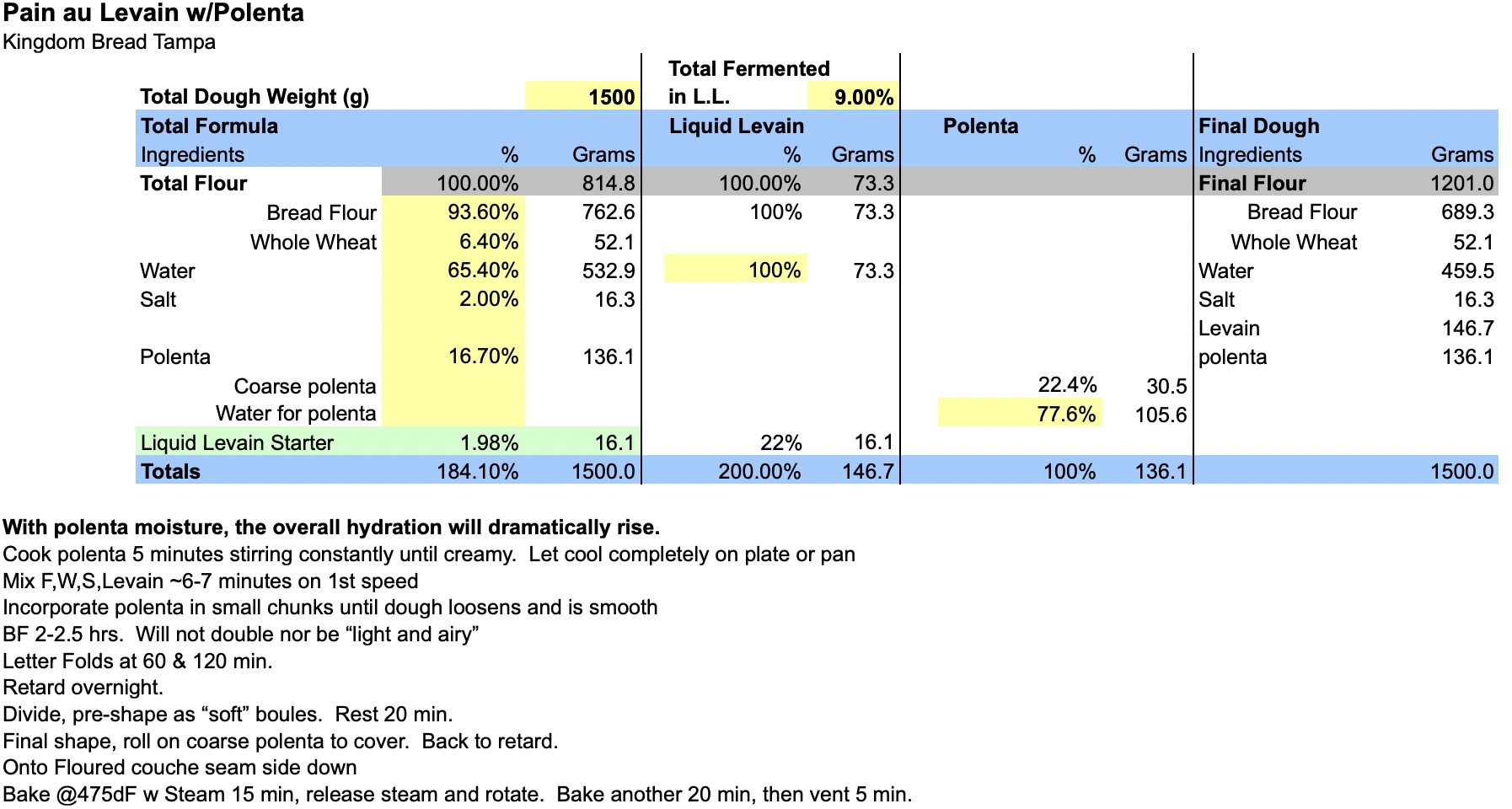 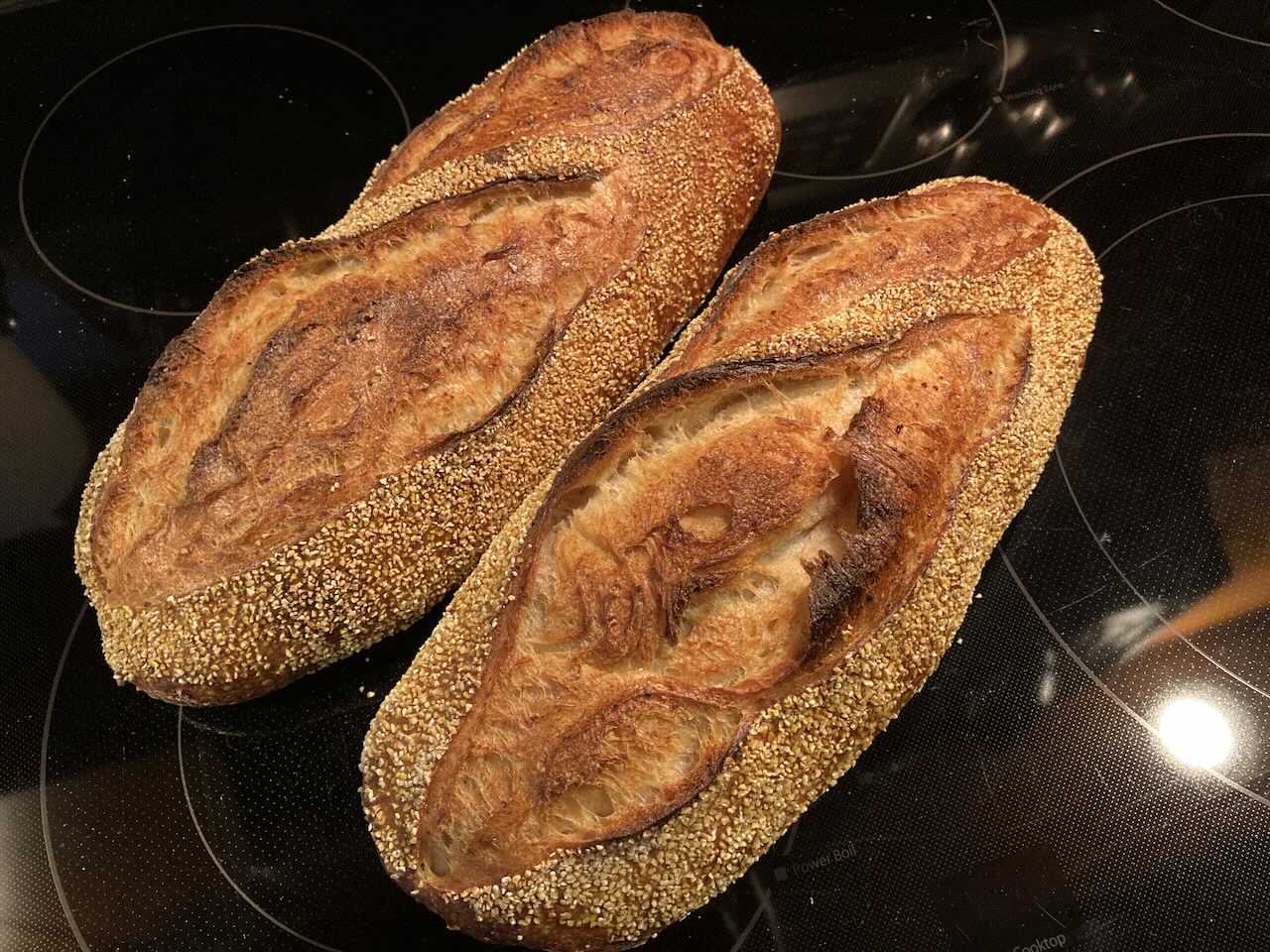 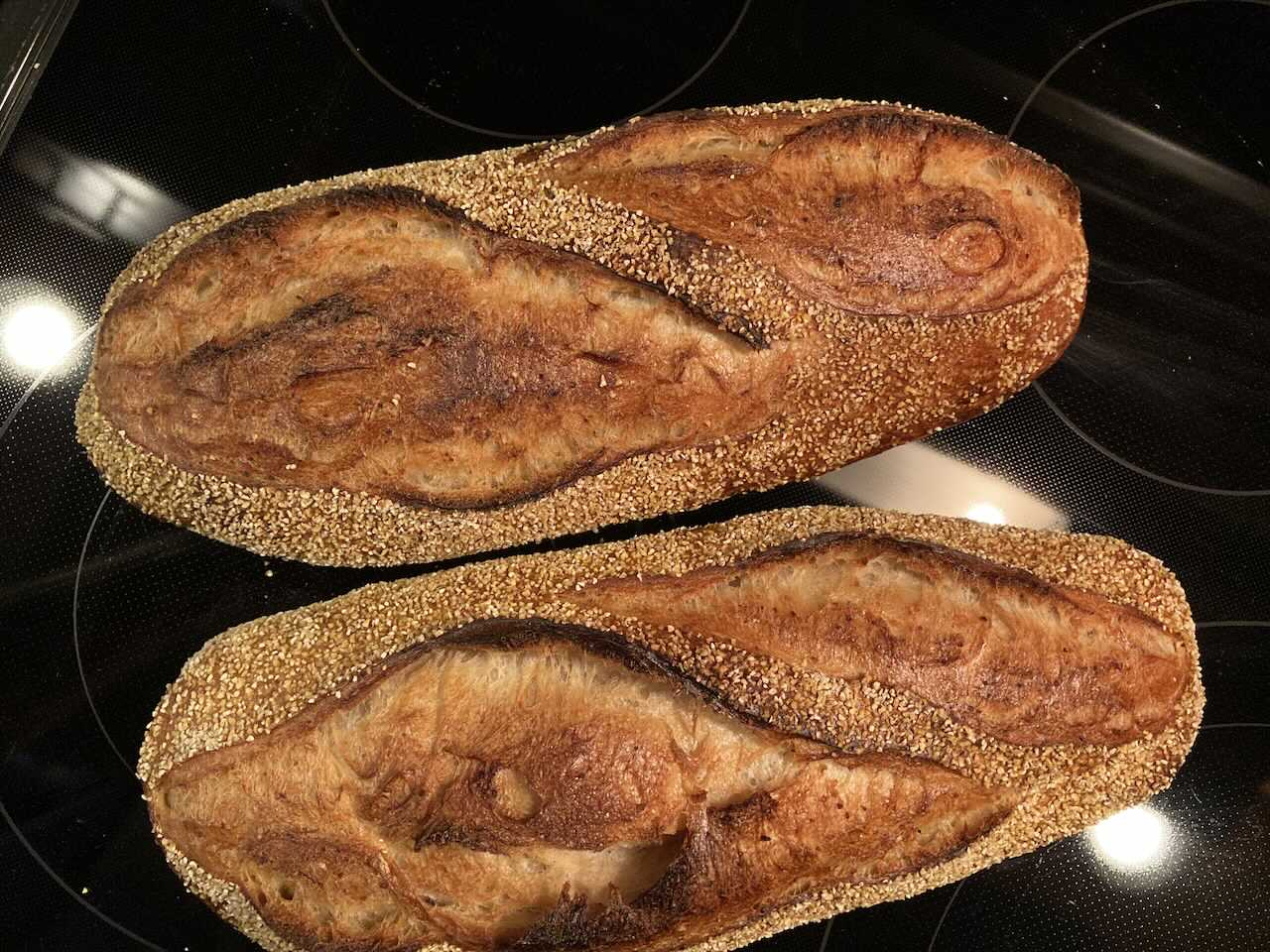 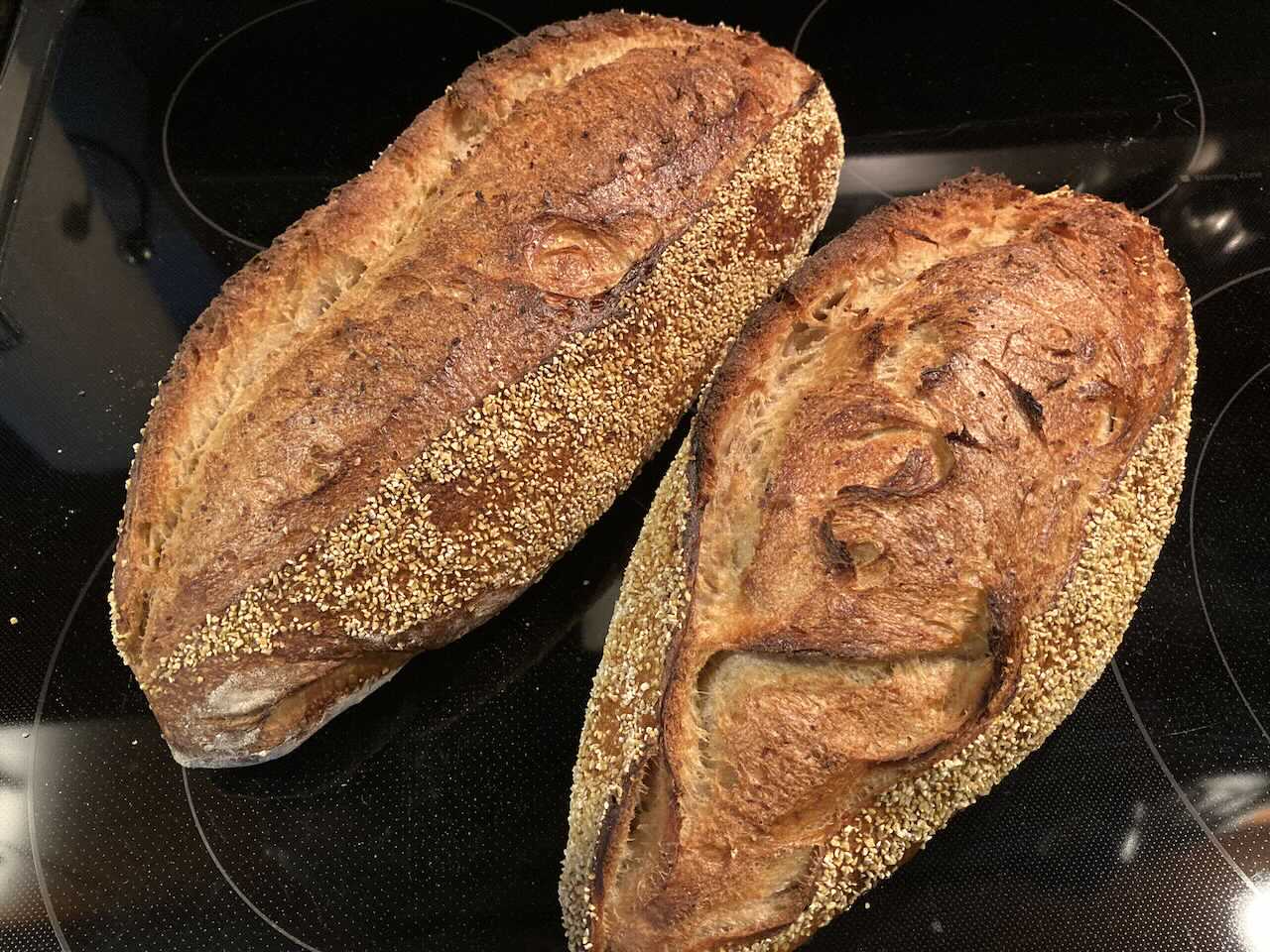 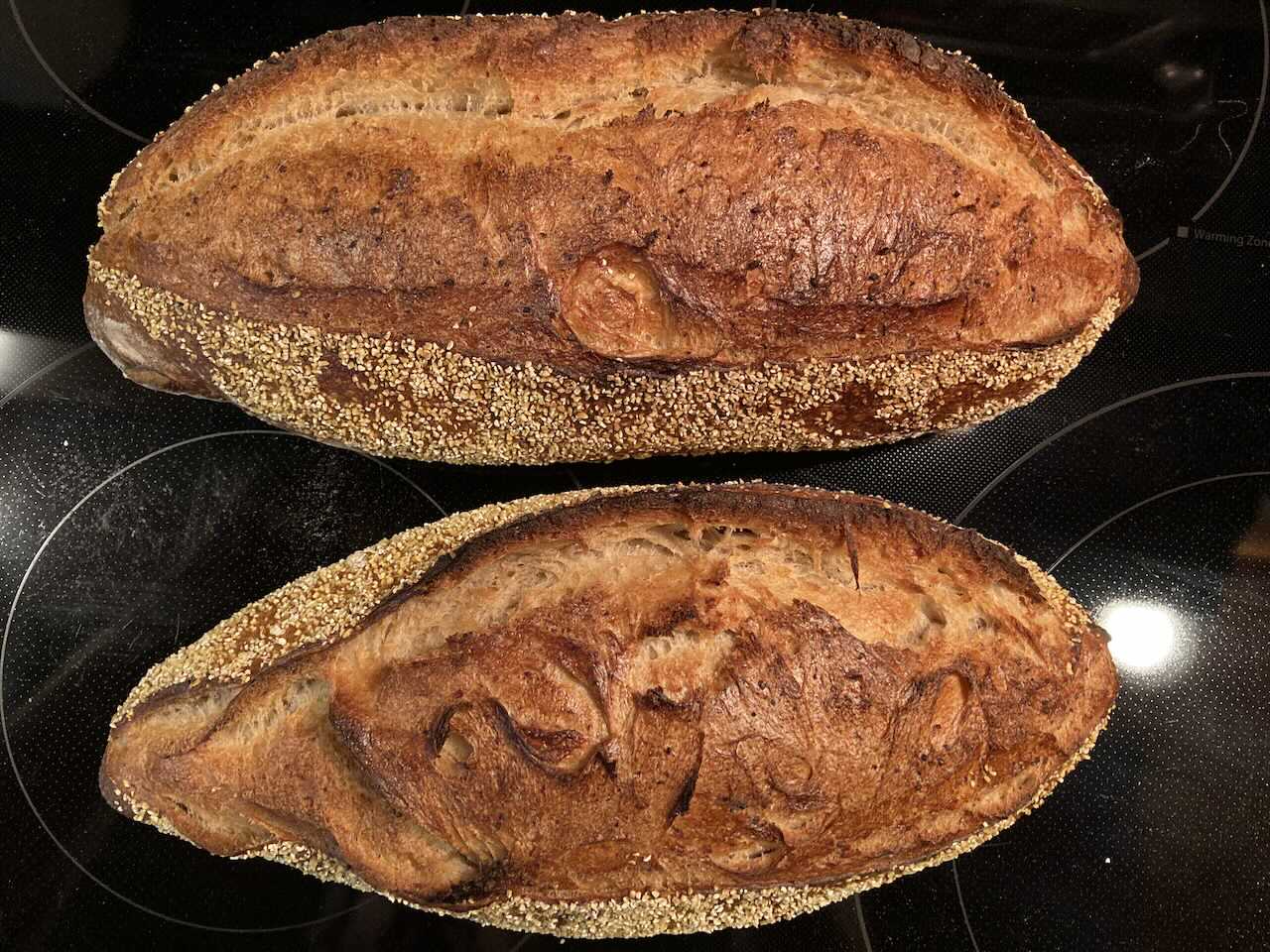 The 20% WW version on the left has a more pronounced flavor than the "original" on the right.  Due to the higher hydration the right loaf would seem to be more open crumbed throughout, but I haven't cut beyond this yet. 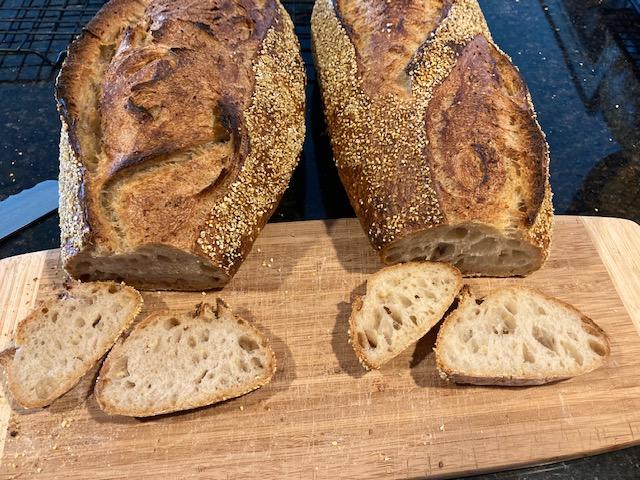 Gives great flavour! My first time using corn was trying Ian's recipe for Broa de Milho. And while it was more Ian than Portuguese the taste was fantastic. Your bake looks very inviting and sounds delicious. Another recipe for me to to try. Thanks Alan.

P.s. whenever I follow the instructions on the packet of polenta for cooking it always seems way too dry. And they say cook it for so long and yet it seems cooked far quicker than the recommended time. That's why I prefer scalds. However your polenta to water ratio plus cooking time looks more realistic.

The video and instructions refer to a 3 cups :1 cup ratio water:corn meal, which is volume, not weight.  When scaled out the change made the polenta go from dense and dry to moist & creamy.  I know because I tossed the first batch out and then went about scaling the water & corn meal.  Cooked for a mere 5 minutes, instead of the old school method of till I grow a beard, while stirring  over a low heat, the polenta indeed came out creamy and moist.

Neither the wife nor I are able to discern a corn taste, but the sweetness of the bread is likely attributable to it.  Using corn meal in bread?  How gauche!  A first time for me, and likely won't be the last.

These look great Alan, very very inviting.  I tried baking a polenta loaf very early on in my sourdough baking when I was too naive to know what to do and it was bad.  Funny that I’ve been thinking about polenta recently as well and wondering if I should try baking with polenta again.  I may just do that now.

The video amounts/percentages almost made me pull my hair out.  Adding up the posted amounts of ingredients from the video, it comes to 3301g, which is right on as he's calling out 825g x 4 loaves.  Then he says the polenta is 10% of the dough weight - 300g!  20% levain?  Does that mean total dough weight, percent of total flour, or PFF of the total flour.

The baker is very nice and soft-spoken, even too slow so I upped the video playback to 1.5x speed, and his technique is surely deft and pro, but a few too many things just did not make the grade.  However, this formula, the one I modified, is a keeper.

Of the mid bake burst.  Alan when do you release steam ? I seem to recall you steam for a while as in 10+ minutes.  Reason I ask is that I am seeing better results with a release around 5 mins.  The longer I wait it seems the early burst tends to sort of subside with 10 or minutes of steam.  Sorry if you already it above.  I am lazy :\

My usual steaming is 12-13 minutes, before removing the one towel.  I leave the lava rock pan in there (for life), as the 2 cups of near boiling water have evaporated by then.  And then rotate the loaves.

On these two bakes, being big muthas, I left the steam on for 15 minutes.  The entire time there was ample steam coming out of the vent.  A few years ago, I think it was Doc Dough, who claimed that steam was needed for only your same 5 minutes.  After that perhaps it was detrimental.  And the first half of that may be so.  However, I can't imagine that my extra time steaming has had any negative effects on the bloom.  If it were any more so, I'd have to get a wider oven to accommodate the oven spring!

I'm not saying that 5 minutes is wrong for anyone, or maybe even for me.  But once I settle on a method that produces consistently satisfying results, I'm hard-pressed to want to move away from it.

One more point on whether 5 minutes is sufficient. I never, as in never, peek in the oven window to see how the loaves are first baking, only looking for the first time when I release the steam.  Old habit now as I probably was slavishly checking the progress early on and moved away from that.  So I can't say whether the dough has had the same oven spring after 5 minutes as after 13 minutes.  Maybe one day I'll check.

As you know its been an adventure to get in tune with my new oven and to echo your thoughts - figure out what works and stick with it.  Previously I would steam for longer but am now dealing with a totally different animal and find that I get better results evacuating earlier.  Maybe it comes down to mean humidity, or the triple point of water or perhaps Flux dispersal against stainless steel chassis ! Who knows ? maybe doc dough knows (do you see the pun developing ?).  Btw I always watch the first 5 minutes because by minute 2 I have a good read on the future loaf ;)

What’s not to love about this one.  I’m a huge fan of polenta in breads and this combo is super.  I’ve made several rye versions with polenta which were tasty as well.

Perhaps a bit shy on enough ingredients for you, but I know how you love the get porridge in there.  Groundbreaking for me, old hat for you.  I gotta say that this bread is right up there with the favorites that I've made.

Try subbing in about 15% rye next time and I think you will really like it as well.

when I wasn't paying attention but Abe's pan loaf version caught my eye. Your version looks great. The video was good and the bread I would imagine has a nice flavor. We love polenta and the next time we make some I will scoop some out before the parmesan is added to it but after the butter is tossed in. I'm worried that the polenta on the outside would end up like gravel. Does the polenta on the crust soften any after baking? Yet another bread on my to do list.

but there's something really appealing about that crunch, especially if you are a dentist recommending this and Turkish Taffy to a patient ;-) .  I like it, but is definitely a hard crunch, so leave it off if you think that will be a problem.  The dough is tacky enough that a roll in a moistened towel will not be necessary to have the raw polenta adhere - and this is one grain/seed where we wouldn't want a complete coating anyway.  Also keep a vacuum cleaner, quadruped pet or bird nearby for the inevitable droppings clean-up.

Following newly learned advise on cooking the polenta, I let the 3:1 water:polenta sit in the water for an hour before even thinking about cooking it.  Then comes to a boil, down to a simmer with a somewhat regular stir, and the dang thing is done to a soft T in 5 minutes time, which seems to be a good consistency for this bread.  The old school nonne in Umbria had it all wrong and it doesn't take all day with wrists & forearms like Venus Williams to cook it.

Thanks.  I've been running through few new bakes recently that are all keepers, the Tom Cat being a certainty as well as this one.  And all make (trumpets please) great toast!  Alan