Questions about Fermentation and Kneading

Questions about Fermentation and Kneading

So I've been casually baking bread for about a year now, but getting into it much more intensively over the last few months once I made the decision to ditch supermarket bread. The hobby's been bringing out my inner perfectionist and I've been slowly improving at making the basic cobs, bloomers and the like. Everything (successful) so far has been yeasted at no more than 65% hydration, which I feel I can knead and shape fairly competently, with your standard hour-ish first rise, pre-shape, shape, final proof and bake.

But I want to move beyond that. I've got a sourdough starter in the making that already smells like yoghurt and should be ready in a couple more days, and yesterday I used up some yeast to have a couple of cracks at high-hydration baguettes. As I researched it though, it opened up a whole new universe of no-knead, S&F and autolyze techniques that I'd never had to worry about before. I'm sort of sold on the idea that you can develop gluten just by waiting, and there seem to be a few authorities that think kneading wet doughs at all ruins their open crumb, but if there can be any clarification on this, or a general explanation of how it fits into recipes, I'd be grateful. S&F seems to just be a particular kind of minimalist kneading, so why why do it? And why space it out over the bulk fermentation instead of doing it at the start?

Both my attempts at baguettes were underwhelming, with a sticky (75%) dough that I possibly over-yeasted (two packets of fast-action for 1.05kg) and certainly didn't develop properly. The recipe called for four S&Fs spaced out at 45-minute intervals during the bulk ferment, but something didn't work and it just never stopped being sticky. Maybe I ruined it when I lost hope and started French slapping it after the second interval. It certainly rose, a lot, and I guess the fact it rose meant I was doing something right, but it never stopped being sticky and shaping it was a non-starter. I eventually bunged it in the oven on a pizza tray and produced an enormous dense pie thing.

The second attempt at baguettes saw me trying to knead 70% dough for 10 minutes, as you normally would, although with the slap method obviously. I don't think I did it right because that was still sticky too, although not quite as bad. I eventually managed to shape it into three baguettes that promptly spread out and turned into stepped-on snakes in the oven.

I'd like the sourdough loaf I make in a few days to be more successful than this sorry tale, and if anyone can tell me how to do the baguettes again differently, I'd be grateful for that too. My instinct is that, once you reach a certain level of wetness, the traditional mix->knead->rise->shape->rise-> bake process breaks down, which is why people start using no-knead recipes with much longer fermentations, but I don't know.

It sounds like you over yeasted your baguettes and if you use too much yeast it will start to go after the gluten. Also, if you use active dry yeast and let your poolish sit and ferment for a while you won’t need as much yeast and will get a better flavor!

Other folks are far more expert on this, but in my experience:

"S&F seems to just be a particular kind of minimalist kneading, so why why do it? And why space it out over the bulk fermentation instead of doing it at the start?"

-- It builds dough strength.  I'm doing an 85% hydration ciabatta a lot these days, and if I just do one or two S&Fs I end up with a relatively flat loaf, like, after cooling, a 1:3 or 1:4 ratio of height to width.  Still light and tasty, though.  If I do a more rigorous series of S&Fs, like 4 or 5, I get a little cloud of a loaf, 1:2 or better, and somewhat better texture throughout.

A more geeky way to put it: if you were just aiming for a certain level of gluten development, on a simple scale from zero to whatever, then hand kneading and sitting around would be substitutes for each other, and moreover could be added at any time until you got the desired level.  But you are also building a gluten structure in the final loaf, and that is what S&Fs are doing.

-- This is an area of some controversy, and occasional strong feeling!  I'll just say that my ciabatta get ten minutes in the kitchenaid, the last few with the hook, at third speed, until the dough stops sticking to the bottom entirely and moves around the bowl.  And a minute or so past that.  And they end up with a pretty open crumb.

edit: with useful timing, this just emerged from the oven.  85% hydration, 1/3 durum flour.  With last week's version I missed most of the S&Fs and it was wider and less high. 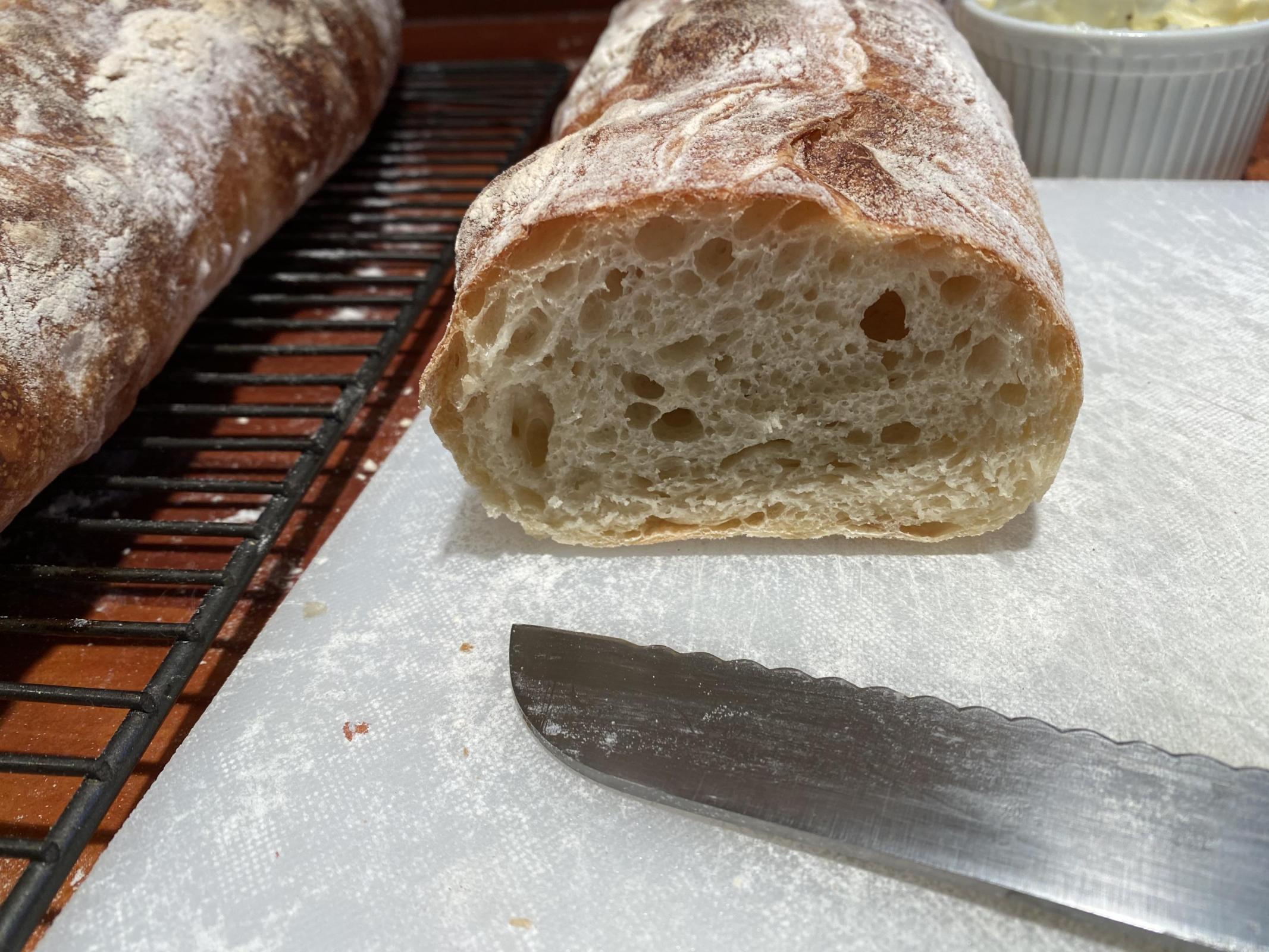 Community Bake - The No Comfort Zone Bake
Spiral mixer advice needed!
Can you use starter in place of yeast?
Burned Bottom on Baguettes
ISO Advice for Better Crumb
END_OF_DOCUMENT_TOKEN_TO_BE_REPLACED