I have made some hot cross buns for the first time and am unsure which part of this recipe is making the buns a bit dense.

> Boiled the milk then cool a little, put some in a bowl with the yeast and malt extract and melt the butter in the rest.  Cool.

> Knead until combined. > rise for an hour.

Next time I was thinking to lower the temperature and cook for longer as these were almost too brown on the top after 12 minutes and I lowered it from 220c after reading the comments on the recipe.  I had to cover them loosely with foil to continue cooking.  Any advice where to start?

Hi Lemonie  working backwards through your post oven temperature is to high for a dough with lots of sugar and fats id say 200 would be tops and even then you would need to watch as they colour very quickly. The other thing that stands out to me is the yeast quantity, again for a rich dough with sugars and fats your 7g equals just under 1.5% given that your flour quantity is 500g so 1% will equal 5g so you can quickly look at your formula in % values. i tend to use dried yeast in a rich fruit dough at a rate of 3 or 4 % which in your dough would have meant 15 to 20g . At that rate the dough would bulk ferment  in about 2 hours + or -. so i see a bit of conflict there as you are using less yeast as well as a shorter BF time,

I also tend to get my fruit incorporated at the end of the mix so that it also luxuriates in the BF gases and magic of fermentation, this being especially true if the dried fruit has come straight from the package and will be drawing on moisture in the dough. In your case pre soaked, Your fruit total comes to 40% which is not bad i usually go to 50%, more than that and you have trouble keeping it in the dough rather than on the floor.

The liquid content and i include the egg is 70%, did you find that easy to handle? i usually start off at 50% then add the egg which is another 10% and probably a dash or 2 more if i'm allowing for the dried fruit uptake. so for me the dough feels quite slack which also helps to hang onto the fruit when its first introduced, but by the time BF has finished and the dough has doubled it has given up some of that moisture to plump up the fruit.

I also use Malt extract  in most of my doughs these days and at the rate of 2%, your dough is 4%..And at the very beginning you state that you boiled the milk and let it cool a little. probably need to cool a lot, unless you were baking in Texas this last week! I would probably consider just water or half milk and half water as the  dough is already carrying a lot of stuff that can inhibit or slow its activity.

In summing up and in answer to the question you pose    " which part of this recipe is making the buns a bit dense." i would say the main culprit  yeast  quantity and BF  times which are directly related. There are a lot of Hot Cross Bun posts if you hit the search box too.

Overall, this is helpful advice, even for people who don’t make hot cross buns.  Thank you Derek.

Thanks Yippee, i'm Very pleased if its of use to anyone!

Sorry for the delay in replying, I've been waiting to get on my pc.  Thank your for your very detailed reply.  This is why this forum is so great because you can learn directly from people with experience.

For my next batch I am going to increase the yeast, lower the heat and extend the bake time.  I'm also thinking of removing the oil but I haven't decided yet.  Thank you again.

The oil/butter/fat ratio should be half what the sugar ratio is and can be anywhere from 2 & 4% right through to 8 &16% depending on your taste  the richer they are the more care required watching the temperature. Iwas practicing a batch yesterday for a baking assignment i have on Wednesday the 3rd  with the buns in the oven and i had a call from a friend who had been un well and in that inattention the buns were in for 2 or 3 minutes longer than i would have liked and they took on some colour. good thing is they tasted just fine. 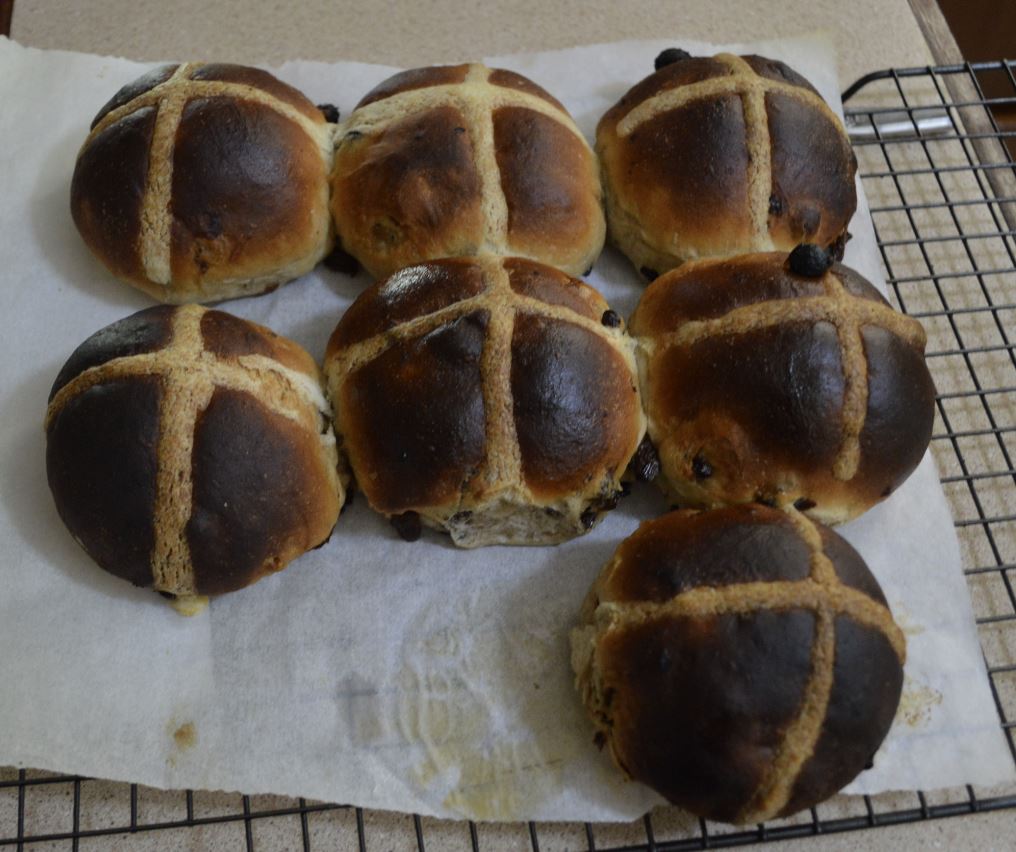 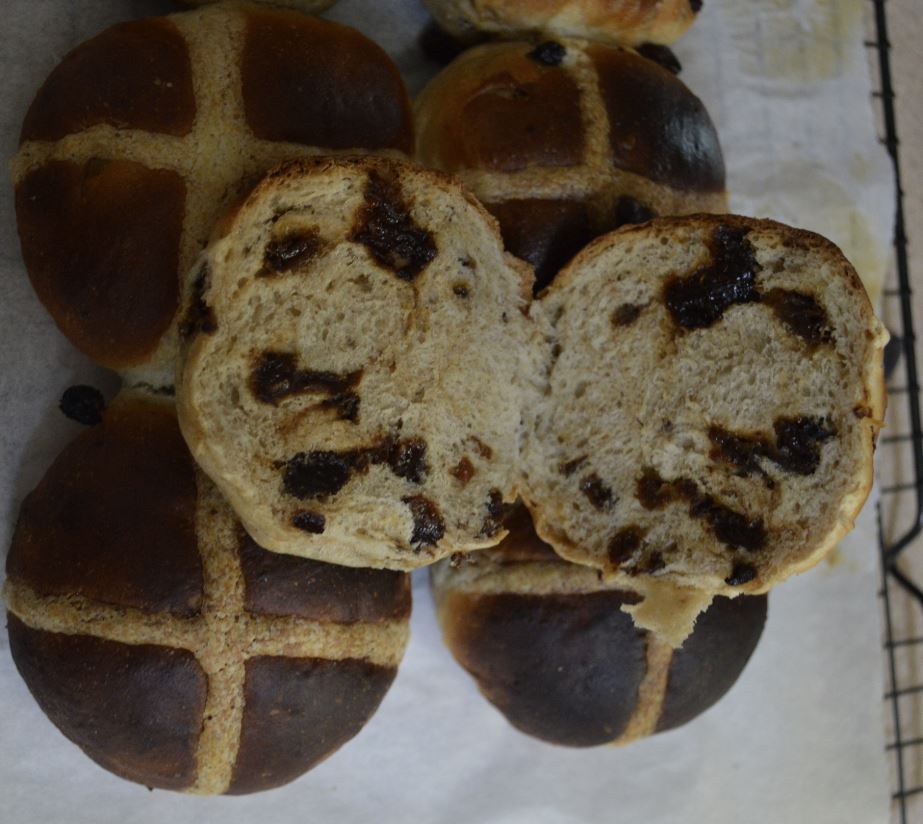 Probably another tip is dont make lots of changes all at once otherwise you are not really going to know which change it was that made the difference. So in your case i would do the yeast increase first and look for doubling in size during the bulk ferment as the guide of when to take the dough . make notes and start to get  a knowledge base of what x % of yeast does time wise in your dough.

> Boiled the milk then cool a little, put some in a bowl with the yeast and malt extract and melt the butter in the rest.  Cool.

> Knead until combined. > rise for an hour. 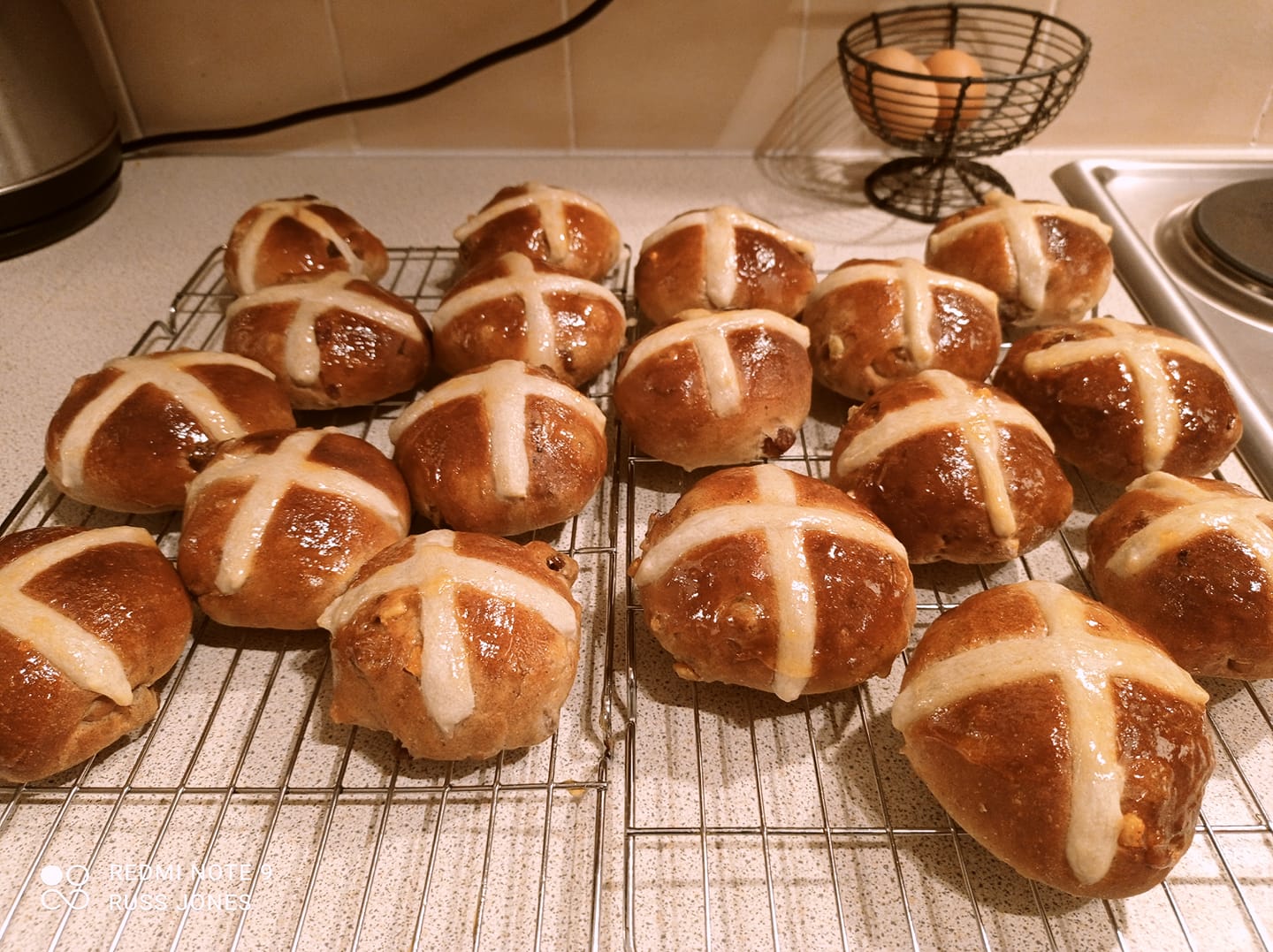 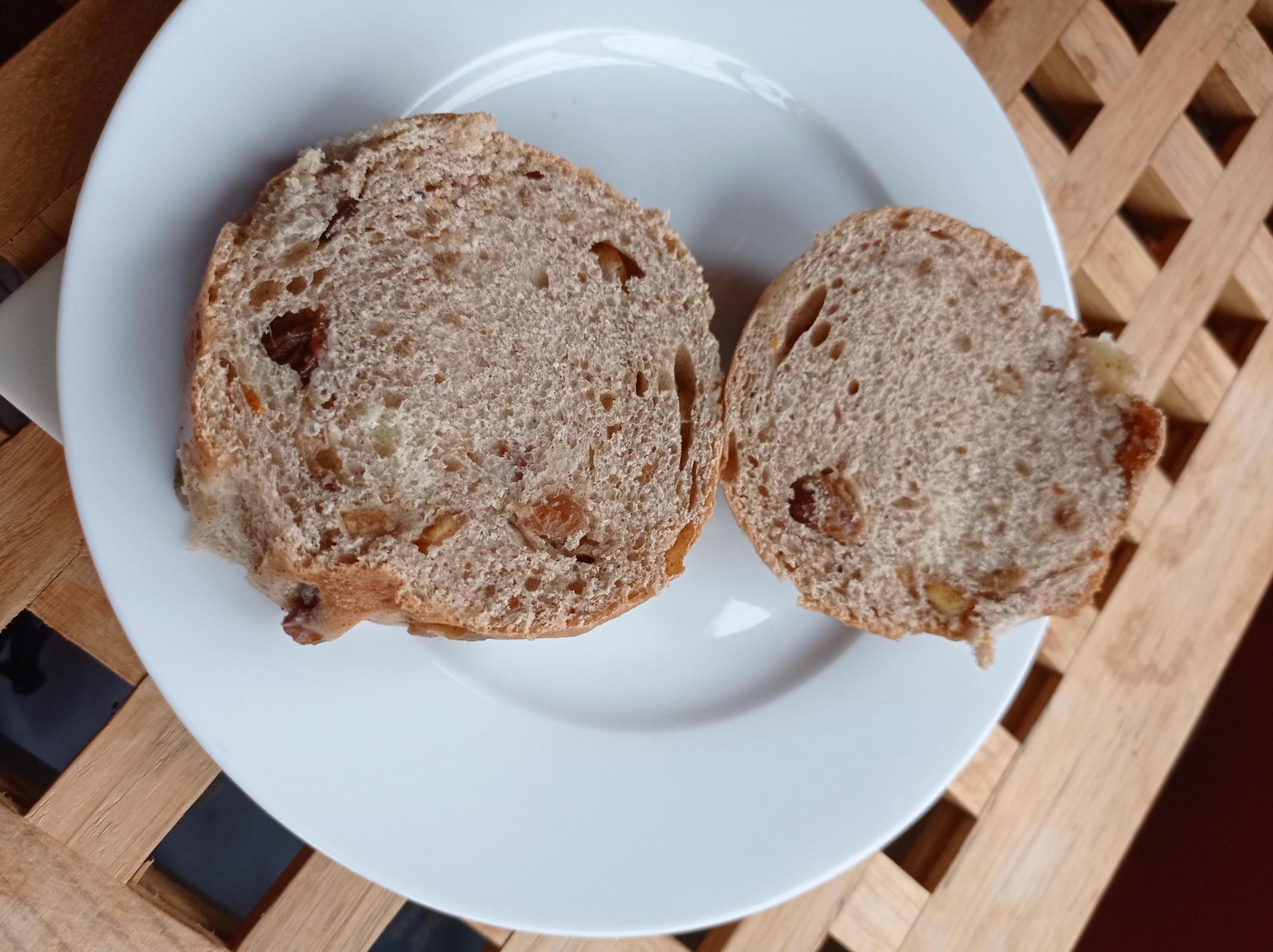 These were a vast improvement on the originals and were not claggy at all.  The taste was really good and don't need to change that but the texture was a bit dense as in closed crumb if I am being hyper critical.  Could this be the fact that it is kneaded twice.  When I add the fruit I use mixer to knead but only have it on number one until it is combined.  I'm thinking perhaps to do the first rise as a no knead or a short knead.  Would this help the texture.

I kept the yeast at 11g as once the fruit is added it rises like mad so went somewhere in the middle and it worked our fine.  Perhaps if I do the full 15g it will make them lighter instead of the no knead.  I'm hoping not to have to do trial and error on these too much as I can't eat them and it's murder having them smelling out the house with all their loveliness.

Yes i'm afraid many people  Kneed  again after the bulk fermentation  and i think that this does tend to lead to problems. For me get all the mixing done and then treat the finished done gently.

I prefer to add the fruit at the end of the mix usually just folding it in  after a ten minute rest that allows the dough to relax and accept the folding in process more readily  i think the fruit and the dough benefit from being combined for the bulk fermentation phase, it really allows the fruit to plump up too. Using the mixer can easily  lead to damaged and broken fruit especially if it has been pre soaked,  so folding through is more gentle and prevents the smudge marks from damaged fruit. Your buns do look so much better well done

Thank you.  I lightly knead it the second time to get the spices and fruit mixed through which takes a bit.  I may add the spices in the first knead and then just mix the fruit through on the second.