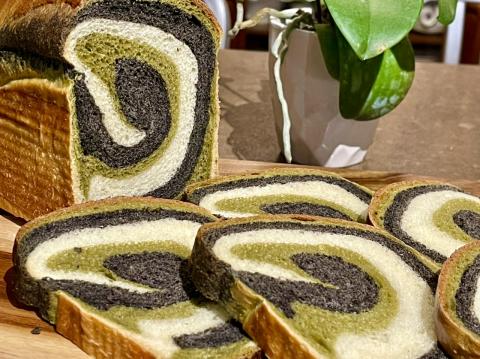 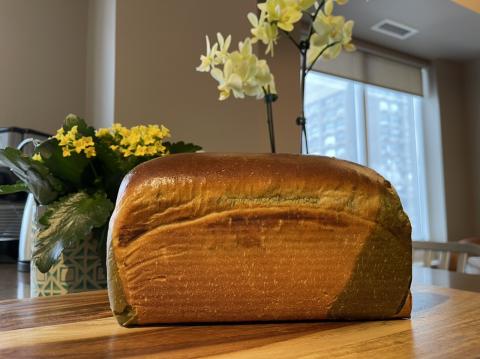 This recipe is an adaptation of a recipe by Chiew See author of the cookbook Autumn Kitchen.  She is on Instagram under the name Autumn Kitchen.  I’ve wanted to bake a swirl milk bread with Asian Flavours and saw her post of a similar bread I think back in summer 2019 and filed it away.  In her original recipe the black sesame seeds are prepared as a paste that becomes one of the layers of the swirl similar to how one adds the filling in a babka.  My adaptation adds the black sesame to the smallest third of the dough and incorporates it into that third.  Another third of the dough get matcha paste incorporated while the final third is unadoroned.  The three are laminated and rolled into a tube before being placed in a Pullman pan.  The following recipe is for a 9x4x4 inch Pullman pan without the lid.

Prepare the Matcha paste and Black sesame powder as follows.

For the Matcha paste

For the Black sesame powder

Grind 96 g of toasted black sesame seeds (I used a coffee grinder) then combine with 18 g of sugar.  Cover and set aside until the morning.

The next morning mix the following except for the butter.

Using a standmixer, mix until incorporated at low speed.  Then mix at higher speed until gluten well formed.  Then gradually add the butter and mix until the dough is elastic, shines and smooth.

Remove the dough from the mixer, shape into a ball and divide into approximate thirds.  Shape the largest third into a boule and set aside covered with a towel.

Place the final medium sized third into the stand mixer along with the matcha paste.  Mix until the dough is a uniform green colour and smooth.  Shape into a boule and place under a tea towel to rest for 5 mins.

Lightly flour a work surface and the plain dough boule.  Roll out to at least 12” in length, set aside.  Continue to do the same with the other two balls next rolling the matcha dough out to 12” and placing that on top of the plain rolled out dough.  Finally rolling the black sesame dough out again to 12” and finally placing that on top of the matcha dough.

Next tightly roll the laminated doughs starting with the short end until you have a swirled log.  Place the log in your prepared Pullman pan (I like to line it with parchment so it is easy to remove from the pan).  Place in the proofing box set to 82-84ºF to proof until the dough come to approximately 1 cm below the edge of the pan.

At about 30 mins before you think your dough will be at 1 cm below the edge of the pan, preheat your oven to 355*F with a rack or baking steel/stone on the lowest rack.  At this time prepare an egg wash and gently brush it on the top of the dough.  When the oven is ready 30 mins later, brush the top of the dough again with the egg wash.  Bake for 45 mins turning once halfway through.  Keep an eye on the top crust and be prepared to shield it with either aluminum foil or a cookie tray above if it is getting dark too soon.  After 45 mins remove from the pan to check for doneness.  Place the bread back in the oven for another 5 minutes to ensure that the crust on the sides is fully set and baked.

Remove from oven and place on a rack to cool completely before slicing.

Edited to add sugar to better balance the matcha. 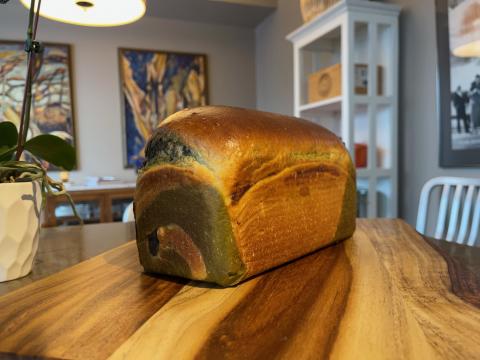 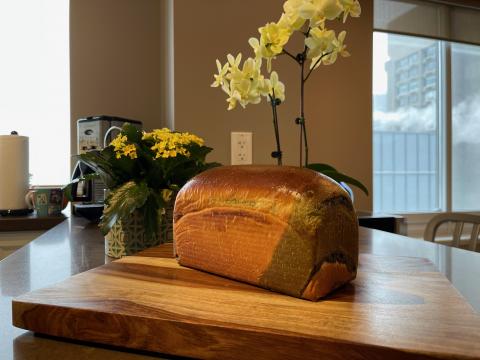 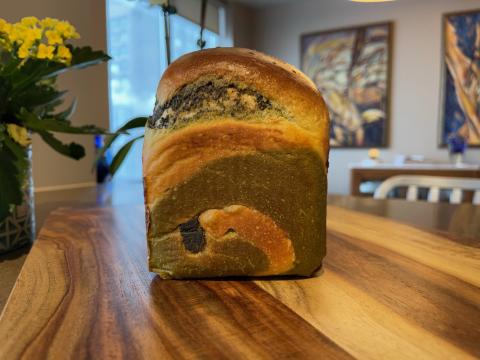 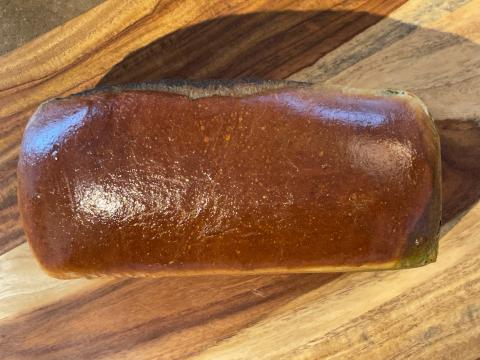 Ok just sliced. I reduced the sugar and left the matcha unbalanced. I’ve adjusted my formula above by adding some sugar to the matcha paste to better balance the inherent bitterness of matcha. Quite pleased with the swirly bread’s crumb though. 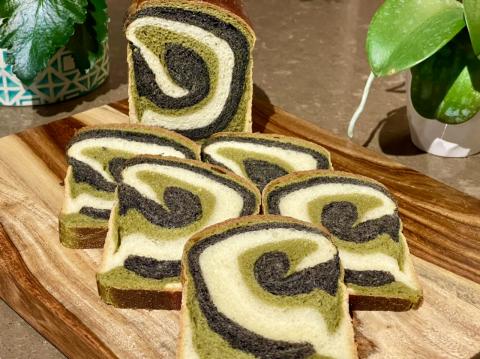 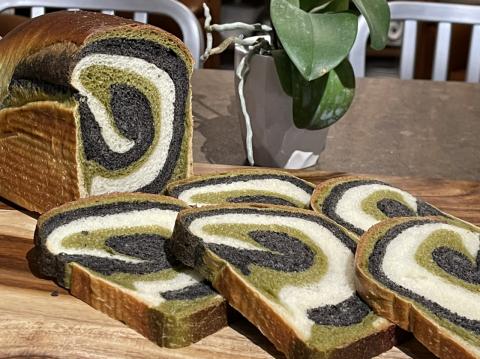 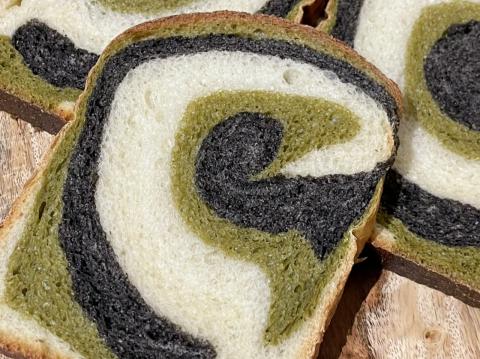 Thank you very much Dan, much appreciated.  Hope you aren’t freezing too badly down there in Louisiana.

Oh wow! A creative work of art! What is the taste like?

JKS thanks so much.  The black sesame isn’t as strong as I thought considering how much was used, but it is there.  The matcha isn’t balanced, it needs some sweetness to it for me, so I edited the formula in case someone wants to try it.  Currently I found the matcha to be a bit bitter.

Nice work of art and matches the room decor. Leave on the bench when doing an "open house" :).  But this is about the bread; I love the swirl and would love to taste it.

Hey Gavin, thanks, I’d certainly share some with you to get your opinion if I could.  It will certainly make great toast with some Yuzu marmalade.

It is said that we are all artist just looking for a medium and you have found yours. I call it sesame serpent bread. Kudos

Great name Don, thanks for the generous comments.

Wow what a beauty Benny!

Thank you Ilya, it makes great toast too.

I think that the photo of you is from some modeling agency and you must really weigh like 800 lbs, or kilos, considering how much bread you are baking.

Yeah, many people find the bitterness of Matcha off putting, I can understand that.  In fact, when I bake this again, I’ll really need to increase the sugar in the matcha dough by adding sugar to the matcha paste, it was even a bit bitter for me, not that I won’t eat it.

And now I know how to add matcha to my cookie dough, in swirls! I find cookies to be overly sweet sometimes so maybe this will balance it out. I wonder if I can use black sesame paste in cookie dough, I don't have a grinder for the little spices. I love all your neat bread ideas. I'm always to nervous to try my ideas out so you are an inspiration! I shall (slowly) stop holding back on experimenting.

My experiments don’t always work that well, which is why they’re called experiments, but even when they don’t you still learn something.  You just gotta try.

That's the fun of experimenting though. I have had too much anxiety lately to experiment. But now that things are somewhat slowing down I can be more adventurous. I'm not sure I can even get black sesame seeds though, that's why I thought of a paste. I will try it without the sesame seeds though, but it probably would look pretty with them scattered on top. We lost our only ethnic grocery store (an Asian one) a few years ago. On the coffee grinder, I don't have one of those either. but I will get one of those cheap ones if I decide to grind them (when I find them).

A mortar and pestle will also work to powderize the sesame seeds although it will take much more elbow grease to do it well.  If you toast white sesame seeds they will work in a pinch and you could even add some toasted sesame seed oil, just a bit to boost the sesame flavour.

Have fun with it, I’ll look forward to seeing what you come up with. 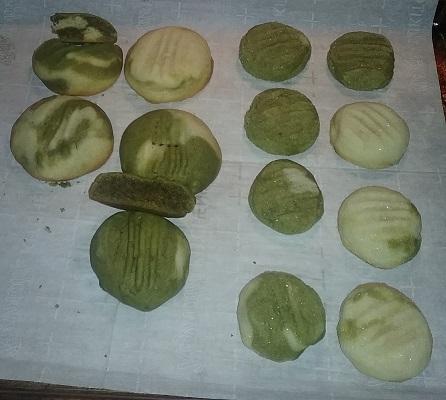 The matcha flavor was in the background. The only other flavor I had was lemon and that was subtle too (2 teaspoons). I used 1 tablespoon for half my dough of about 360g flour. My son likes the green ones best. I think I'll do a chocolate version next though.

Very nice cookies, I’m sure I’d love the matcha ones, but I love lemon too so I’m sure I’d be happy to eat them as well.

They tasted better than they look! I haven't made that recipe in a long time. I need to make them thinner so they are more crispy. I'm thinking snowball cookies coated in matcha and powdered sugar instead of just the sugar. If I could get red bean paste, then that would really be a treat. I'd love to do a red bean paste cookie or a tamago boro with it. My kids love those things, Sorry, too much cookie talk on a bread forum. I swear I'll be making rolls soon (nothing picture worthy though).

Can you find the dried azuki/mung beans?  I think the paste is easy to make from the dried beans. I haven’t made them but remember helping my mother make the paste as a kid.

Hi there, would you mind sharing the recipe for those cookies? :)

Wow! This is insanely good Benny.

Your baking is top-drawer and you have a good eye for photography too.

Thank you Michael, I appreciate your positive comments on my baking.  Compared to what I was baking just a year ago yes I have improved quite a bit.  Thanks also for your comments on my photography, than is another small hobby of mine.

Benny where did you get that beautiful cutting board

Thank you very much.  The cutting board surprisingly gets a lot of positive comments, more than my bread LOL.  There’s a kitchen store in St. Lawrence Market here in Toronto that sells them. On the underside the board has really nice grippy feet to prevent it from sliding when in use.  The feet are stamped with the name gripperwood.  I believe this is sheesham wood, I’d never heard of this wood before but it has a really good weight to it.