I noticed this new study published today?  I thought some might be interested in it, some surprising and not so surprising findings.

I particularly found the notes about the presence of Acetic Acid Bacteria interesting.  I don’t recall mention of AAB in the past, so this is new information to me.  We’ve all read lots of information about LAB and their ability to make acetic and lactic acid, but not about AAB.  Also interesting their comment that starters with the AAB tended to ferment more slowly than those without.  I wonder if in fact, when ones starter becomes sluggish is it possible that there has been a shift to AAB in the bacterial component of our starter?

I intend to read the study. My current understanding is that in fermentation the bacteria will take a couple of pathways depending on the environment. Wet and warm (21-35C) - homofermentative - fairly mild lactic acid. Drier and cooler (10-18C) - heterofermentative - sharper acetic acid.

EDIT: I've just read the study. I wasn't aware of AAB as being one of three in most starters. Very good study. Thank you for bringing it to our attention.

Interesting about the lactic/acetic balance Gavin.  So far as I can tell, my starter gets more lactic when dry (<80% hydrstion) and more acetic when wet.  I haven't noticed much of a difference in the balance with temperature but if anything lower temperatures also seem to favour acetic.  But I haven't investigated below about 22° C much.

So not quite the same as your experience.

I maintain my starter with all wholemeal rye at 100% hydration and either use it as is for a basic loaf or build something different for a particular bake if I have time.

Trying to understand living organisms throws up many surprises. My short summary is from what I have read, particularly from Daniel T. DiMuzio - Bread Baking, an Artisan's Perspective.

My own starter is a stiff rye sour. 85% hydration,50% rye sour and 100% stone-ground rye. I feed it every morning and never refrigerate it. I can then build whatever levain I need over two or three feeds. A resulting white liquid levain (125% hydration) is quite mild. I think temperature and time play influencing roles.

Thanks for finding this Benito!

Just read it quickly - really interesting, confirms some other stuff I have read  about the relative importance of geography, heritage and maintenance conditions in determining a starter's microbiome (the last one appears to be the main factor).

I hadn't heard of AABs either.  On the one hand they are said to be difficult to maintain, yet on the other their were noticed in a number of starters.  Couldn't see any clues about how they ended up in some starters but not others so it is not clear how to act on t it.

Thank you! Quite interesting! I find this statistic the most remarkable: the vast, or even absolute?, majority of starters might be developed/maintained at too low temperatures to bring out the full potential of the SD microbiota. 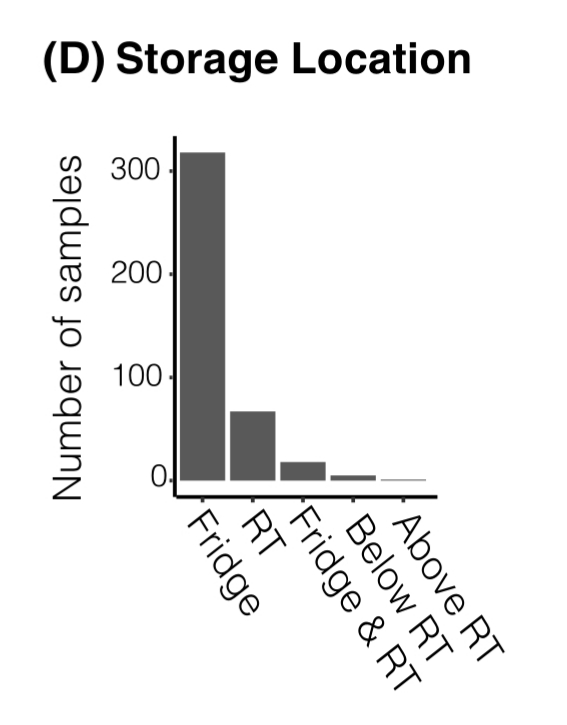 For starters that live in the fridge, the important time is when they are not in the fridge.  How many refreshes before they go back and at what temperature etc .

Yes, an interesting point!  Is this true then for sourdough starters in general that several refreshments at a different temperature is what it takes to develop a new stable microbiological makeup?   Or to restore yeast/bacteria populations to the pre-storage microflora profile?  Doesn't sound impossible considering it takes a week or so to develop a starter from scratch.

I think so harum.  *If* the conditions in which a starter is kept and fed are the main thing affecting the microbial make-up, then for a fridge starter you need to look at the whole cycle and what survives that:  fridge - n refreshes outside the fridge - back in fridge.  With n=1 there will be a fair bit of residue from what went on in the fridge when you put it back there, so a popultion of fridge-loving bugs (ones that would not normally thrive in a room-temperature only culture) could survive through the cycles.  Less so with n=2, 3 etc., the higher temperature loving bugs should have crowded them out.  Higher temperatures in the outside-fridge cycles will be less friendly to them, and so on.

Maybe it is the time in the fridge that favours the AABs that were observed in some fridge starters?  Refresh cycles involving fridge time are going to be different from what goes on commercially, so you would expect a different microbial profile (unless n is very high I suppose).

When refreshing my fridge-stored starter I always do a high ratio feed. I either almost completely use up the starter, or if it gets sluggish before that, I discard most of it and only keep a few grams on the bottom, and then feed with >5x (not sure exactly how much is left, so don't know exactly). This tends to works pretty well.

Appreciate your response, GS!  I guess there has to be a paper somewhere on this, too.

As to AAB, could their presence be chalked up to suboptimal starter handling?  There is a disclaimer in the paper: "Relative to bakeries, home producers likely follow less strict and sustained regimens for starter maintenance; they may vary techniques over time or keep imperfect records in regard to reported metadata."

Thanks for alerting us to this one Benny.  This is just the kind of study I was hoping Rob Dunn et al. would do at some point:  Examine the microbial diversity in lots of starters.  This'll be a fascinating read.

I’ll be interested in your take on this Tom as I have found everyone’s takes interesting as well so far.

Still have the tab open to read the paper, it sure looks interesting - but haven't found the time yet. Thanks for sharing Benny.

I'll be very interested in what you think Ilya.

I have been struggling with my starter.  Have been trying to get one going since October/November with minimal success.  I can get good fermentation and flavor, but leavening is always very weak.  Flavor is good, but I would say the aromas are vinegary and bread has a definite tang.  Makes me wonder about AAB vs LAB, but I have zero SD background prior to this.  Lack of leavening could just as well be due to my overall starter maintenance.

Haven’t finished the paper yet, but interesting read so far.

There is a possibility that your starter is totallly perfect but DDT isn't reached.

That’s another one I’ll need to check.  I do my BF in a DIY proofing box, so I’m pretty confident on the temp there.  However, my stone countertop is on the cold side this time of year, and I could certainly be losing temp while I’m working the dough.  Have never checked temp before putting it in the proofing box.

Yes, starting dough temperature.  My "room temperature" is never higher than 65°F, therefore every single ingredient has to be warmed up pretty well before adding to the dough.  If I don't do this then during even the longest BFs the center never reaches the right temperature: warm bubbly periphery, cooler denser core.

Thank you for the tip!  I’ll make sure to check that on tomorrow’s bake.

BTW HeiHei, I am also a mountain biker, though I haven't owned a Kona for 20 years or so.  Its a mud fest here in Wales at the moment.

I checked my dough temp for the first time yesterday right before going into BF, and sure enough, it was down around 72 deg.  Pushed my proofing box temp up to compensate for that and try to get it up to target.  After that, I placed a large cookie sheet on my stone countertop and poured hot water in it about 10 minutes before my folds so I was working on a warm surface.

Thanks for sharing this Benny.

While the authors found some significance of AAB, its presence will always remain between minor or not significant (not present). The dominant bacteria will always be LAB since they are best suited to the environment of that medium and we could say their presence are a defining characteristic of sourdough cultures. If AAB were dominant the medium would cease to be a sourdough culture.

AAB are strict aerobes as are moulds, while yeasts are facultative anaerobes and LAB are generally aerotolerant anaerobes.

As LAB and yeast ferment they make the environment more favourable to them, this can be observed by a decrease in redox potential (becomes less oxidative) consequently making the environment unsuitable for AAB.

AAB are responsible for the transformation of ethanol into acetic (ethanoic) acid and can to be found in environments which have access to oxygen (air). AAB are a common spoilage microorganism of wine in which they use molecular oxygen to oxidise alcohol (ethanol) into acetic acid.

This particular study notes the majority of starters sampled were fridge bound for most of their existence. With that in mind, it is worth noting many liquid starters that are left too long in the fridge might develop a layer of hooch (alcohol). This, and the air space above make an ideal environment for the growth of AAB. And mould.

____-Side note-____
My fridge stored Durum starter happened to grow a cellulose scaffold on top of the liquid layer. I'm guessing this oddity is the spawning of a vinegar mother or at least something similar! It was quite bizarre to witness this strange mass develop. Unfortunately it's now covered in mould also.

In conclusion, AAB may be active in a given starter and may contribute some acetic acid but on the whole its presence IMO is of minor significance where sourdough is concerned.

I suspect the authors are steering toward the topic of AAB to encourage further research in that area. And even perhaps they have a penchant for kombucha... (cynical humour implied)

Thank you for your informed analysis on this topic Michael, I was hoping that you’d chime in.  Helpful as always in putting it all together in a way that makes sense.  Much appreciated.

How would the maintenance practice of stirring during a starter refresh impact that balance?

I’ve just started doing that with the understanding that it helps provide new food for the yeast as well as oxygen.  I do notice that I get higher rates of expansion after a stirring and a uniform distribution of small gas bubbles versus large pockets.  I assume that’s the yeast doing it’s thing, but just an assumption on my part based on what I’ve read as “good tips”.  If they’re present, would AAB out compete the yeast for dissolved oxygen?  If so, would that maintenance practice impact the presence of AAB?

I’m guessing it doesn’t take long for conditions to go anaerobic after the jar is closed, but that’s another assumption.  😁

it depends on what country do you live! for example in europe and in scandinavia you can catch in your jar very important microbiomes those giving to the starter that brown color, called 'brown worms'. they give that strength to the starter but the other worms microbiomes are good too in order to create a potent starter!