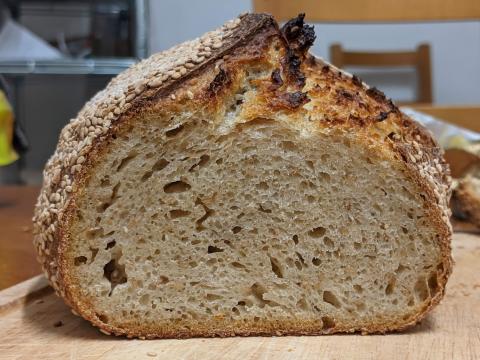 Baked a bread in the style of the Hamelman formula provided in the first post. Had to deviate slightly, due to flour availabilty: I had just under 100g of semola remacinata left, and half a bag of pasta flour that is 50% durum. So combining that I could make a ~60% durum 900g loaf, but had to use the 50% durum pasta flour in the levain instead of bread flour. I included 30 g toasted sesame seeds. Here is my formula: https://fgbc.dk/181m

I almost never use hydration <70%, so it was refreshing to have a non-sticky dough which lended itself perfectly to traditional kneading. I also did some stretch&folds in the beginning of bulk, but I'd say they were more short kneads, since the dough was not at all stretchy.

I tried using the aliquot jar, and this time it worked nicely. With such low hydration dough I think it wasn't very precise because it grew much more in the center forming a meniscus. So I ended bulk somewhere after 50% increase. Then shaped into a batard and coated with sesame seeds. It went directly into the fridge for ~24 hours due to my schedule constraints. Interestingly, it didn't seem to relax in the fridge at all and retained it's shape perfectly with a perhaps very slight increase in size.

Scored with an S-like pattern (for Sesame Semolina Sourdough), and in it went into an upturned preheated pyrex casserole dish that serves as a DO. Baked in it for 20-25 min, and then without the lid for another 15-20 min - until I liked the colour. No thermometer probing :) 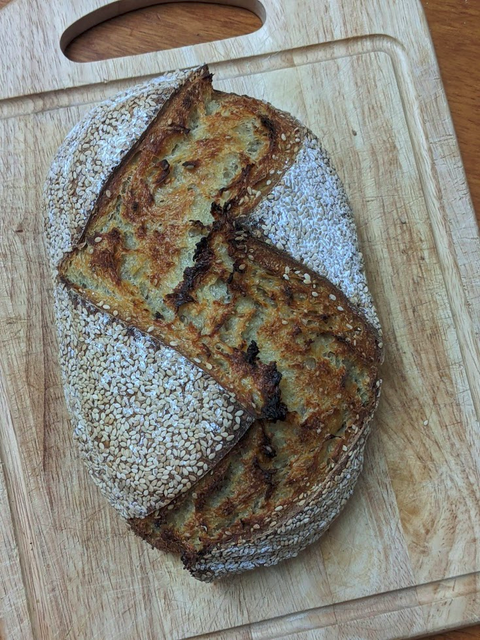 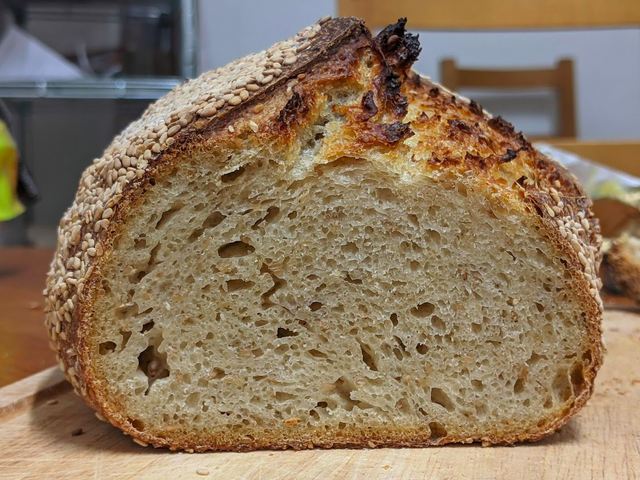 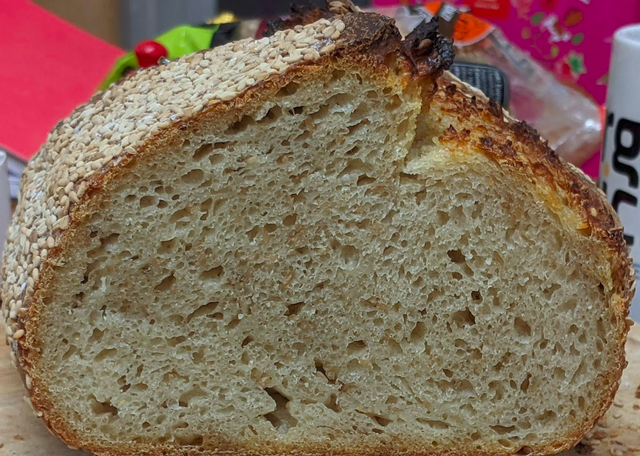 I am very pleased with this bake, both the crust and the crumb. Tight, but well fermented throughout, very even. Just what Murph is looking for! There is also a clear but not strong tang - either from the wet levain, the long retard - or both? And a delicious nutty taste from the durum and sesame. Crust is super crispy, like durum tends to make it, with a good coating of sesame seeds. Very successful bake all around!

Having used up my semola remacinata, I thought I'd try to use regular semolina in bread. But since it's so coarse, I had an idea to use it as a porridge, which is a delicious breakfast dish in its own right. And considering semolina is just coarsely ground wheat, it's essentially tangzhong. And I decided to use a lot of Kamut flour in the loaf to get that beautiful yellow colour. Since I was imagining it as a more of a slightly enriched "sandwich" bread, I used oat milk as the liquid, and added some honey and butter. Here is my formula: https://fgbc.dk/18k3

For some reason my levain seemed a bit week, didn't quite double overnight - I tried to give it more time but nothing more happened. I proceeded with the bread anyway, hoping essentially refreshing it in the dough would help with the strength. Not sure that worked like I wanted to, the dough was barely moving after a few hours, judging by the aliquot jar. There was a bit off fermentation going on with some bubbles visible on the bottom of the dough through the bowl.

I felt it was starting to break down after 5-6 hours at warm temperature, so I decided to just shape it and hope for the best. In the final proof it actually appeared to grow a little, but nothing like what it normally should. Regardless, I just baked it, since I was afraid of gluten degradation. Surprisingly, there was noticeable oven spring, and the result is not bad: quite dense, but not gummy and fermented throughout the loaf. 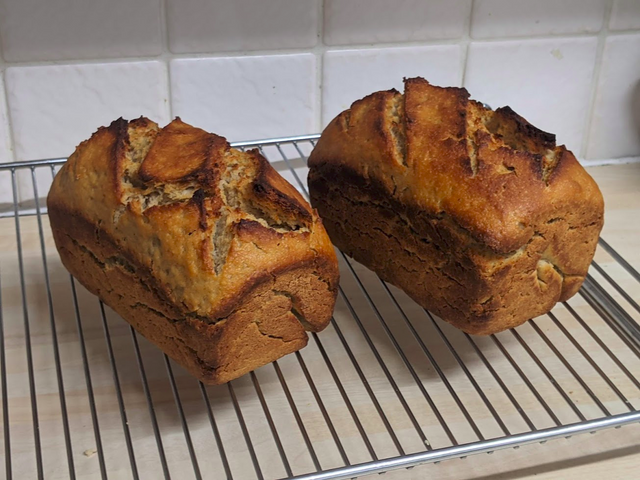 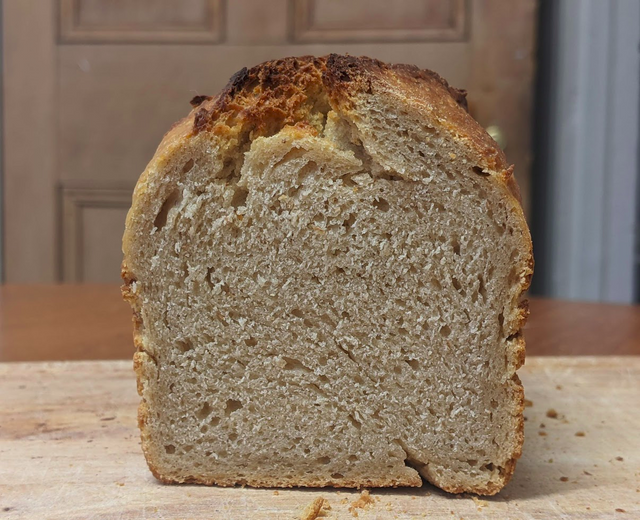 Tastes nice: a little sweet, a little sour, a little buttery and nutty - both from the butter, and from Kamut and semolina porridge, I guess. Despite the fermentation issues, the bread is actually pretty good!

Followed the recipe suggested by Abe for pane cafone (https://www.youtube.com/watch?v=uZi2tSwndiU). Used fine semolina instead of semola rimacinata due to availability.

Converted my 100% hydration rye starter to a stiff wheat starter overnight, then did three quick builds during the day (the second and third are part of the recipe). Added like a 5 min saltolyse before mixing in the starter to let the semolina hydrate a bit before kneading, to avoid grittiness. I don't think my starter was quite a vigorous as in the video, so extended the time between/after the fold to 30 min. After kneading the dough was so nice, very soft and just a little tacky, but not at all sticky. Shaped into a long loaf and proofed overnight on a couche in the fridge.

Baked 25 min with steam, and around 15-20 min more without, and left it in the cooling oven with the door ajar for a bit. Got very nice oven spring and good colour. Surprisingly, the crust is a bit soft, unlike my previous breads with durum, where the crust was super hard and crispy. 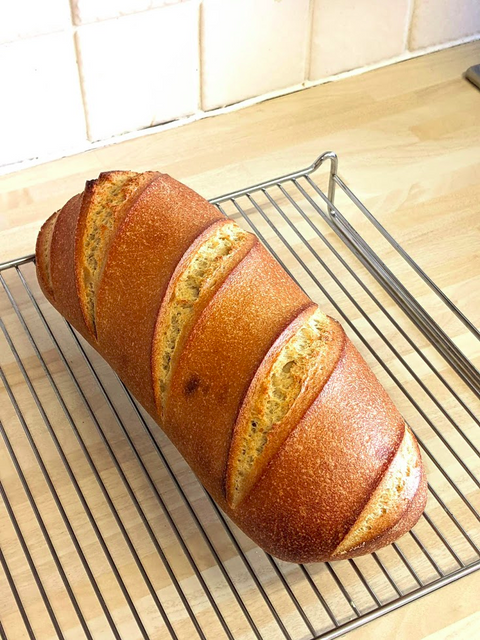 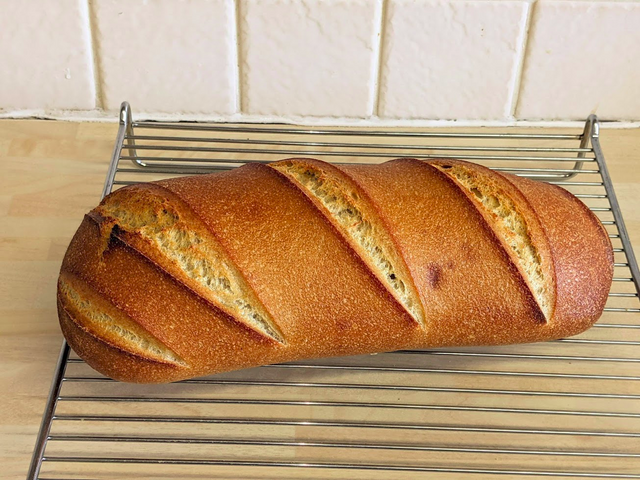 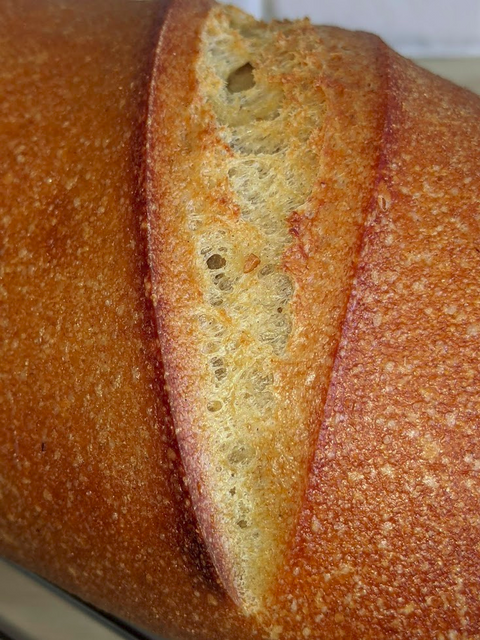 Will cut and see the crumb later today.

After the previous underproofed bake of pane cafone, I was determined to figure it out and make it work. Well, I'm definitely much closer this time!

Basically, with Abe's guidance, I strengthened the stiff starter over a few feeds, so that it properly follows the timing in the recipe (doubling within 3-4 hours for first and second dough). On top of that, after kneading I left the dough to proof at 27C in my "proofer" for 1 hr, since it certainly felt cold - despite using warm water - must be heat loss from kneading on a colder surface.

And then it also spent much longer in the cold proof in the fridge this time, around 15 hrs. From outside it looks like a twin of the first loaf (just a little smaller, since I made a slightly smaller batch of dough). However it's not underproofed! 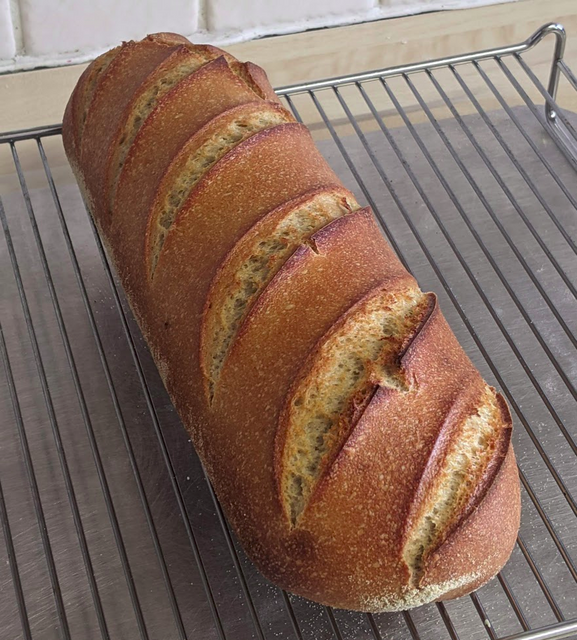 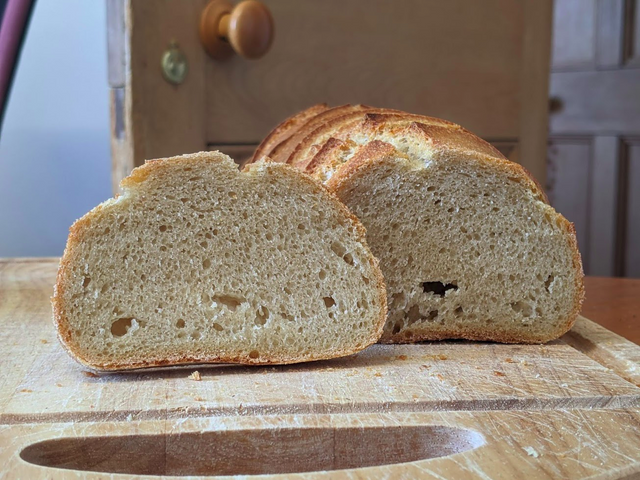 There are some slightly larger holes in the crumb, but these I would believe that I trapped during shaping. Hope I don't discover some caverns further inside the loaf!

The flavour is the same lovely non-sour, with a hint of durum sweetness and some nice underlying aroma - as Abe says, as if it was a biga bread.

Made another semolina loaf to bring to a bbq with friends. Simple recipe, 60% fine semolina, rest bread flour (and some rye flour from the starter in the levain). Formula: https://fgbc.dk/1ju2

Fermented the starter for around 6 hrs, nowhere near doubled, but the consistency seemed very soupy from the beginning (a lot of rye, and a lot of acidity, maybe), probably not capturing gas well.

Mixed everything, left for ~40 min to hydrate (semolina certainly needed it!), did some slap&folds for medium development, left in an oiled straight sided container at 28C. 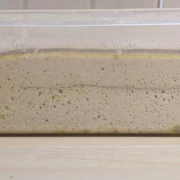 Preshaped by folding similar to the pane cafone video recipe earlier, then shaped into a batard (the dough was a little more sticky than I wanted, might have been on the verge of overfermentation) and applied black and regular sesame seeds - one colour for each side of the loaf. Proofed in the fridge overnight - only around 9 hrs, was late and needed to bake in the morning so the bread cools before transporting. Baked in a preheated upturned pyrex casserole dish for steam around 15 min (260C), then until nice colour without cover (230C). 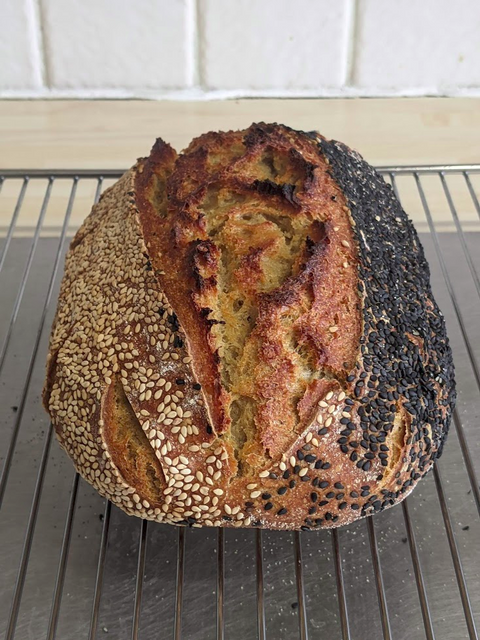 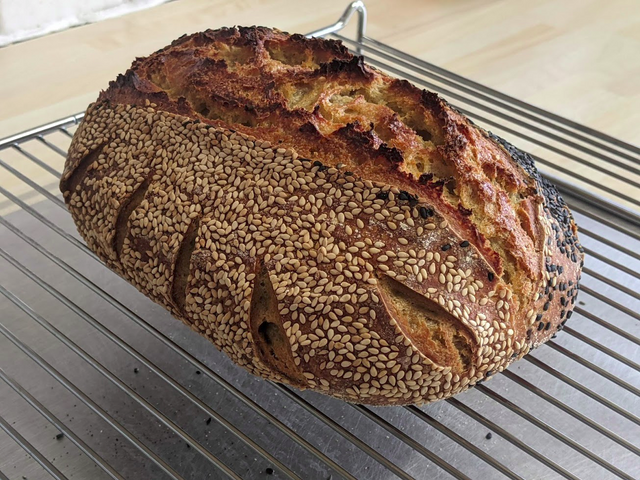 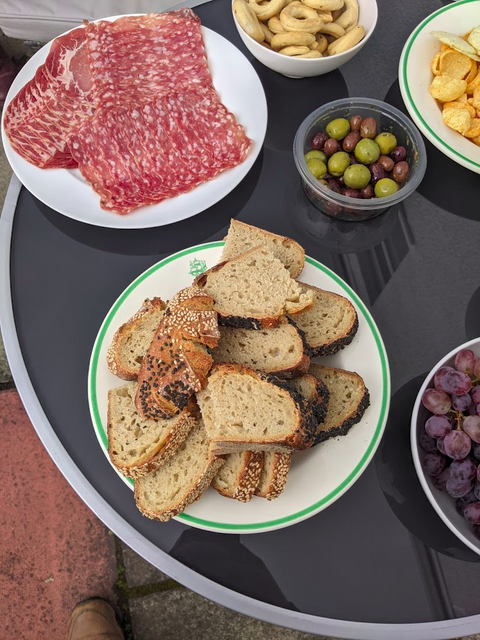 Nice and even crumb - probably could do with a longer final proof for slightly more openness, but I was very constrained by my schedule. Everyone loved the bread, and I was quite pleased too. Good bread that stands up to toppings, but with a mild flavour.

This one came out perfect!

Thanks for sharing the bake details.

Thank you! Glad you liked the score too.

I love your bread. How did you accomplish your crumb?

My bet is that a perfectly proofed bulk will render larger holes. Therefore, a strong shape and pre-shape will be required to squeeze out the excess gas.

My biggest bet is placed on the pre-shape and forming. I'm undecided on length of proof but I will start with the Community Bake's times, of course.

Good degassing when shaping, I think that's key for a crumb like this. So you are right. I've done it before with higher hydration though, and never got crumb quite this tight and even, so that's another important factor I think.

I always love your crusts and your bake #3 is no exception. The colors and scoring are striking and I bet the bread is delicious. All your bakes for this CB have been good. Nice work.

Thank you AG, apologies for a late reply! I always make sure to bake crusts until the colour that I like - I feel sometimes I risk drying out the bread a bit, but there is nothing sadder than a dull-looking loaf!