This is my first bread post, but I’ve been lurking regularly since February 2020. I’ve recently become intrigued with doing more “outside the box” loaves, inspired by the posts of Benito, WoodenSpoon, isand66, dabrownman, and others. It’s easy for me to get bogged down by the technical/mechanical aspect of baking and forget that this is still a culinary pursuit. I find myself blown away at so many of their posts; the ideas for bringing flavors into bread, textures, and taste profiles exhibit skills that I don’t have and haven’t really nurtured so far in my short 1.5 years of baking. So thanks for all the inspiration guys!

My first attempt at this “style” of baking is making a chocolate, cherry pan loaf. I have toast almost every morning for breakfast, so wanted something that I could incorporate easily into my diet without having to buy crazy ingredients or cook elaborate recipes. I made a version of FullProofBaking’s Purple Sweet Potato loaf a couple weeks ago and decided to use that as the bones for this recipe.

I started with toasting up some walnuts in butter, vanilla, and Vietnamese cinnamon. From there, I whipped up a batch of porridge to mix in, and began rehydrating a handful of dried cherries. Once everything cooled I mixed all the ingredients together. I originally held back 30g of water, because I figured the yogurt would make this wetter then normal, but thought the better of it and added it back in. Mistake #1 😊 I beat it for 2 minutes, then switched to the dough hook for 5.5 minutes on speed 2. The dough was a soppy mess, but it was developing nicely, so I figured I’d roll with it. While folding in the cherries and walnuts I incorporated another 20g of bread flour. I’m typing this while the bread is proving I just realized I forgot to add any salt into the loaf. So this should be fine. Mistake #2. 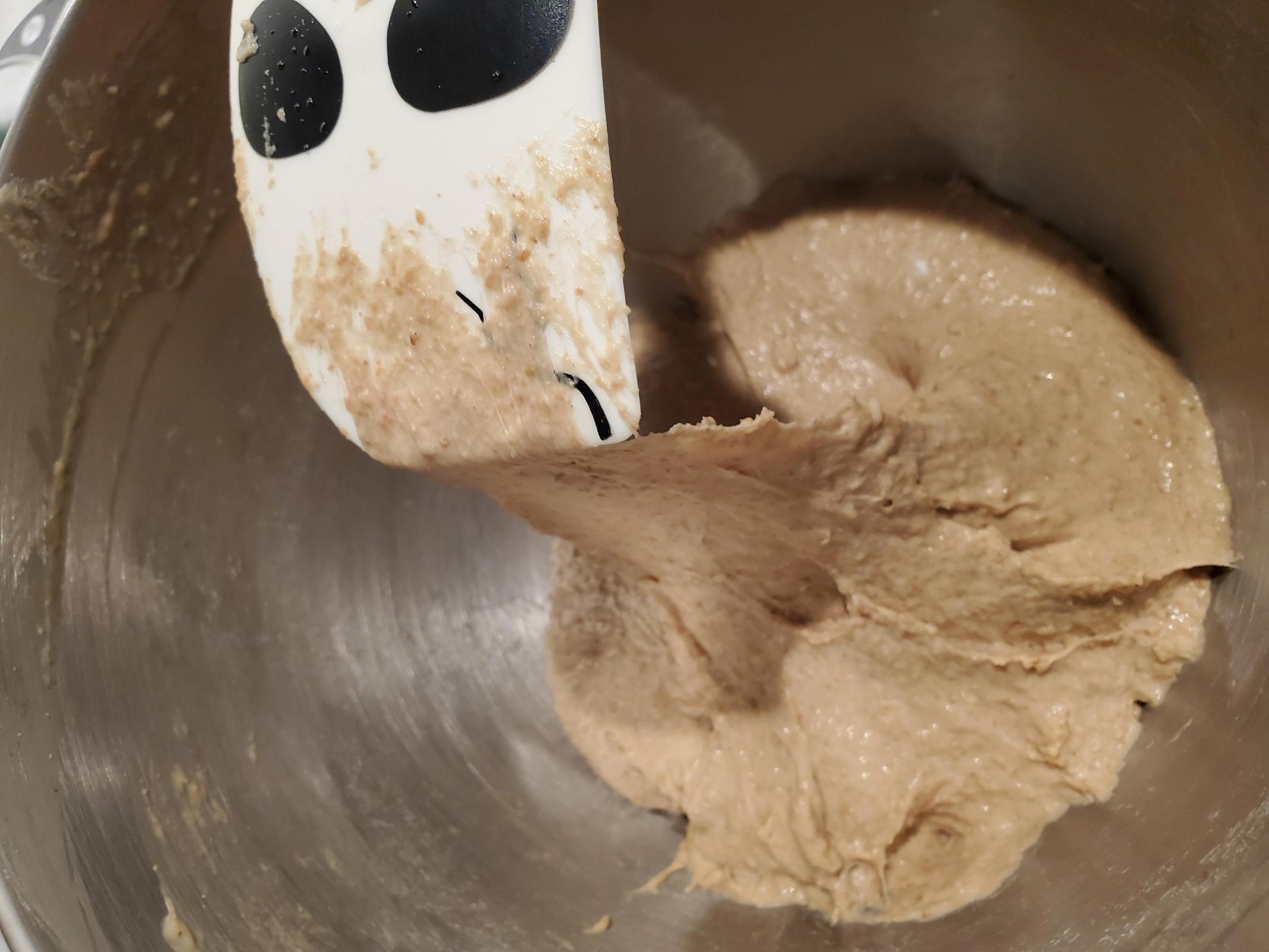 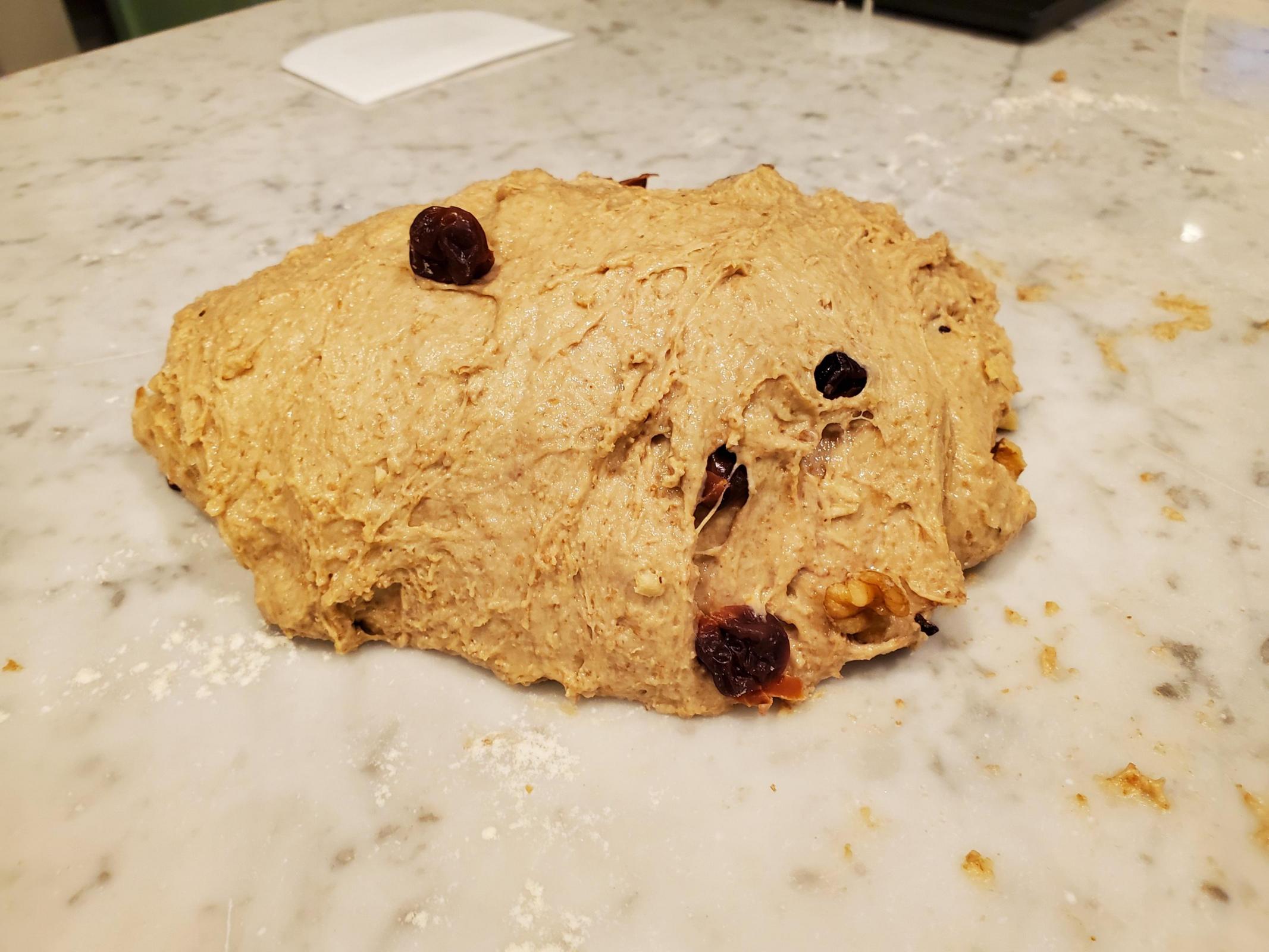 Once I got everything incorporated somewhat (it was damn near impossible), I rolled it into a ball/oiled bowl and into the fridge to ferment for about 16 hours. It rose beautifully overnight. I oiled the countertops and my hands well and rolled it up into my small Pullman. It took about 2 hours to rise to the rim. I preheated the oven to 425f, dropped it down to 400f & baked for 25 min, then down to 350f for another 25 min, covered. Bread browned quickly on the top, quicker than I expected/wanted. I wrapped it in a towel and put it on the rack to cool for about 6 hours. 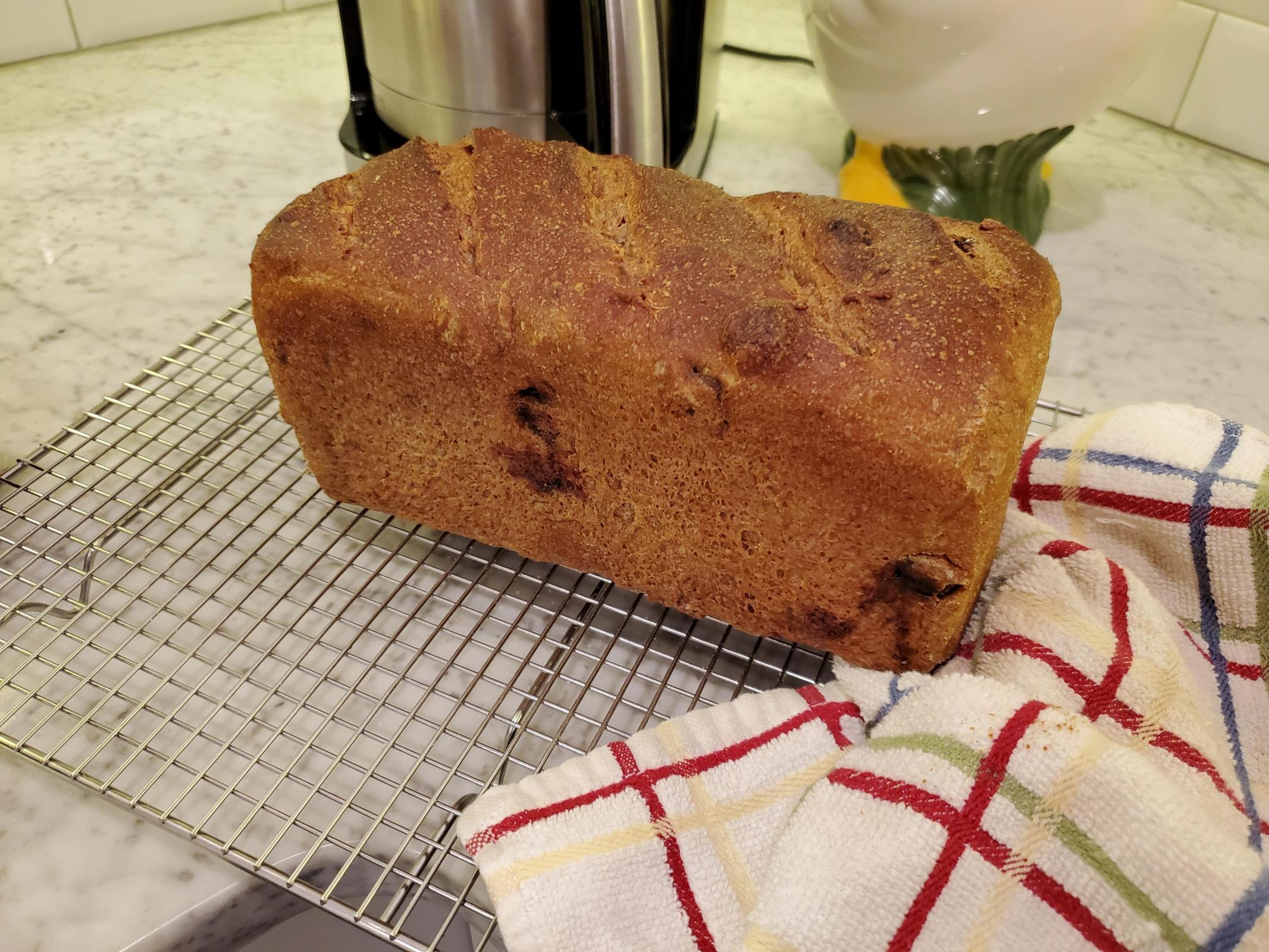 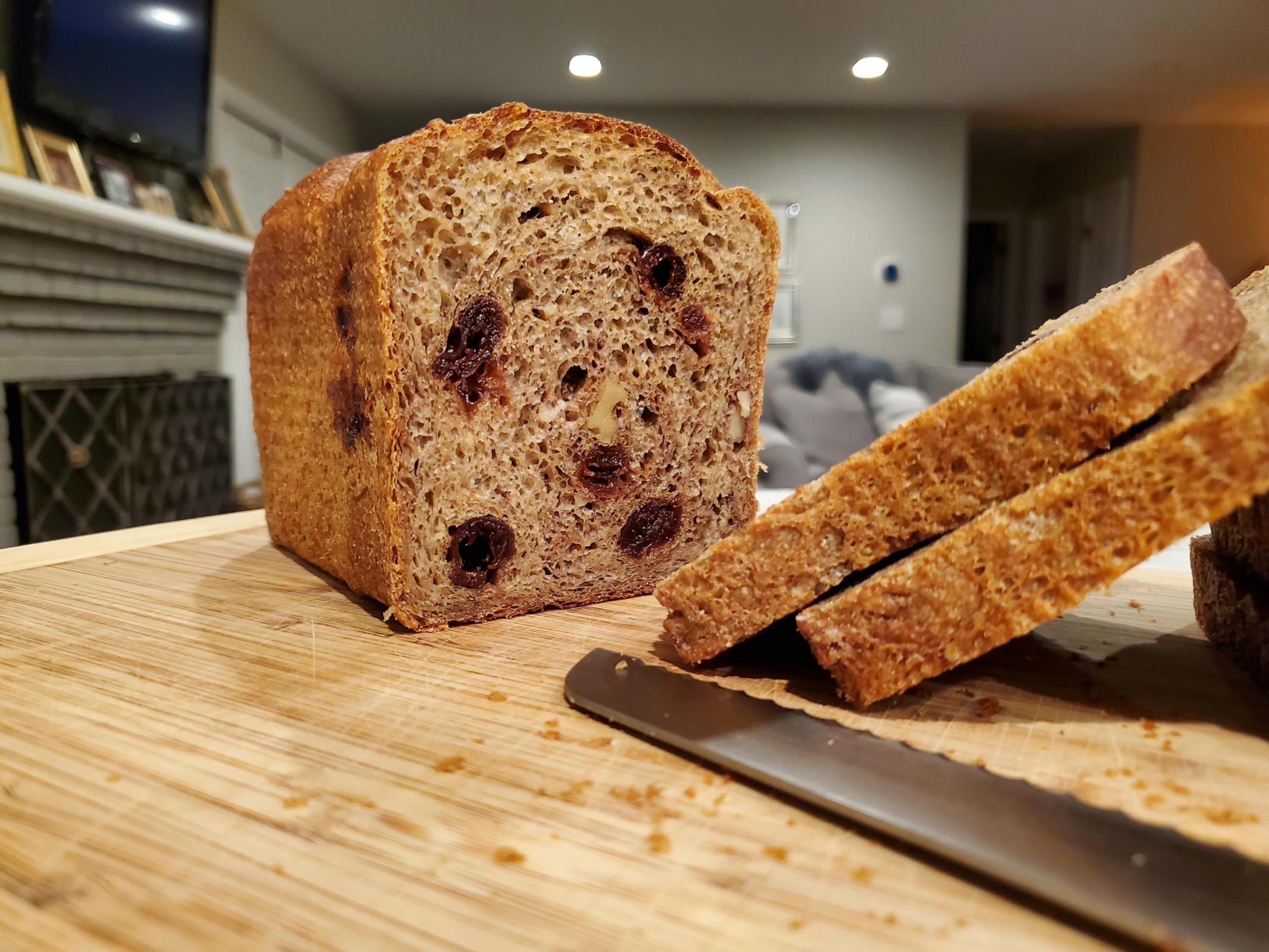 The overwhelming taste to me is spelt. I’m not a huge spelt fan, but I have a pound or so left that I’m determined to bake through, so I put it in recipes where I can. On certain bites I get coffee or some bitterness that I assume is from the stout. I think some OJ could have gone a ways to mellow out the wheat taste from the spelt. Cherries and walnuts taste fine when you hit them, but no sign of cinnamon or vanilla from the nuts or oatmeal. I gave a piece to my wife last night to test and her response was: “It tastes like bread. Needs salt.” 🙄 Still good enough for breakfast toast with bananas, almond butter, cinnamon, and hemp seeds though! 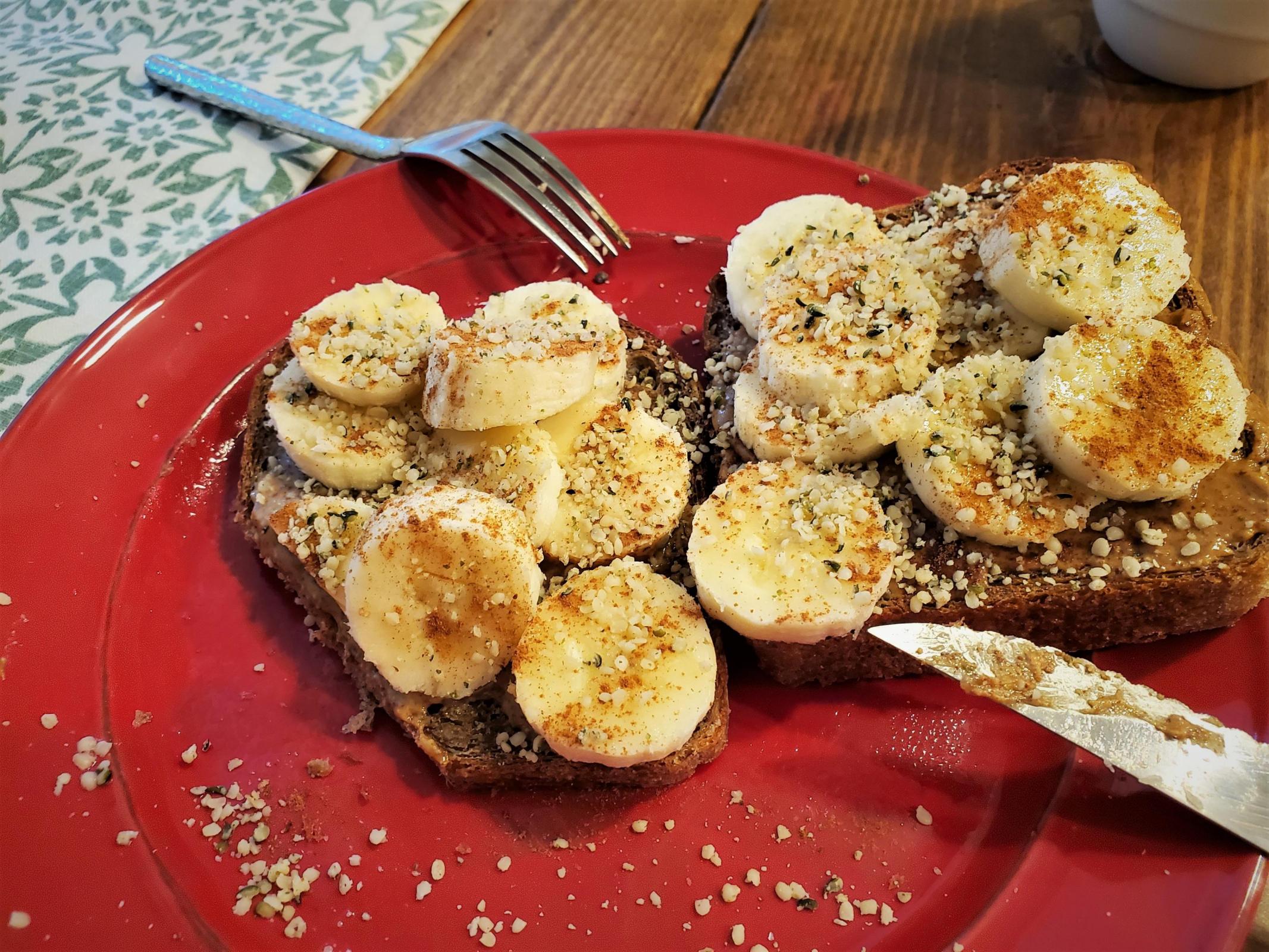 I think on the next “bold” loaf I attempt I won’t be as shy with flavorings. I’m thinking lemon or orange zest with vanilla and cardamom, maybe rolls. Thanks for reading!