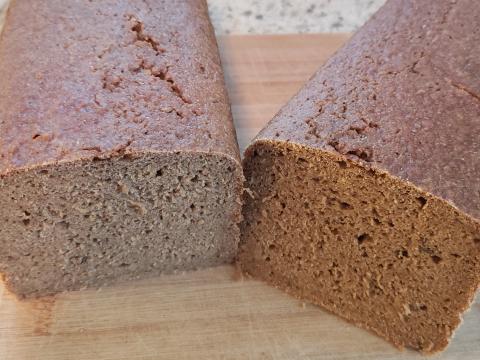 I found this 31-hour recipe on YouTube by Russ Brot, see links below.  I am very happy with the results, moist, loaded with deep rye flavor and relatively easy as long as you have the ability to regulate the various temperatures required at different stages.  The total dough weight is 2,400 grams (5.3 pounds) for two loaves.  I used one large 16” loaf pan.  Russ has many other great YouTube recipes, although many are in Russian.  The link below is for the English versions of his recipes via subtitles.  This recipe is the “Country Bread with Caraway”.

The recipe involves 1) a 16-hour starter build at 80 degrees, 2) a second stage build for 4 hours at 80 degrees, a scald portion for 5 hours at 150 degrees, which at the end is cooled down to 95 degrees.  Step 1 and 2 are then combined for an 8-hour fermentation at 86 degrees.  Finally, the remaining ingredients are combined for a 75-minute rise at 105 degrees.  Spray with water prior to going into the oven, and again at 20 minutes to keep the top moist.

The bake is 8 minutes at 550 degrees followed by 50 minutes at 375 degrees.  All steps are mixed by hand.  The consistency is like thick mashed potatoes.  When forming the final loaf, reserve one ounce of the mix, add water and mix well so it is like a thin paste.  This is spread on top of the loaf with a basting brush before the bake as it smooths out the surface and blends in any minor cracks or surface anomalies. I used a dough scraper to shape the final edged inward to a slight dome.  After the rise the bread had a nice subtle dome shape which is noted in the pictures.  After 90 minutes of cooling, I wrapped the loaf in several layers of plastic wrap, followed by placement in a large plastic bag.  Wait two days, then smile as you try the first bite!  The color is from the Milliard reaction, not the relatively little bit of molasses that I added.

I made the following changes, which overall are relatively subtle:

The recipe requires a special fermented malted rye which is only available in Germany or Russia, unless you make your own.  It is unique as the normal malting process is supplemented – and fermented by incorporating starter into the malting process. He has a fascinating video of how this is made per the second link below. I already had my own home made malted rye, not fermented as his process does.  I am very happy with the way this came out. I know it would be better using his malt technique.

He states two requirements for this bread: 1) malted Red Rye per the link, and 2) the ability to control the various temperature ranges the various stages require.

The bread is delightful, perfect with cream cheese and with or with an added slice of smoked salmon.  My deviations were slight overall.  In the future, I will make the fermented rye malt as below and try that.  It will provide and even deeper rye nuance.  The 5 grams of Caraway added a nice back note, I may use a dash or two more in the next go around.

His YouTube videos also have Borodinsky bread, German Wheat breads and more.  All are dark and look amazing!  The recipes are shown in the YouTube section just above the comments section, all being centigrade temperatures.  Check it out. I am delighted to have come across his videos!

Well-well, more fans of Rus Brot! He is amazing, and the recipes he shares are all well thought through, and either follow GOST/traditional recipes, or follow the principles from them.

Your bake looks great, and watching through the recipe, must be a delicious bread! I recently made one of Rus's bread too, by the way, highly recommend his "Nobleman's" bread - I don't think there were English subtitles for that video though: https://www.thefreshloaf.com/node/67013/noblemans-bread-80-rye-seeds Delicious seeded rye.

I just got some fermented red rye malt finally, so will be baking more of his recipes soon.

Looking forward to discovering more of his breads (and also the posts you have been making)!