A couple of months back my starter fed whole red fife became very sluggish again.  As I did when this first happened I fed it whole rye for several days and got it active again.  However, in the hopes of keeping it healthy and active I decided to keep it on a whole rye diet and couldn’t be happier.  Where I couldn’t make a good white flour levain now I can get a 3.5-4 x rise with a white levain.

So what is it about rye that makes it such an ideal flour to feed starter?  Well one thing is that it has more amylase in it than other flours, at least that is my understanding.  There are other factors but keeping this one factor in mind I decided to see if I could make whole red fife a more potent feed for starter by boosting its amylase and devised this small experiment.

I will compare three mini levains, each started with 5 g of starter, 1:2:2. 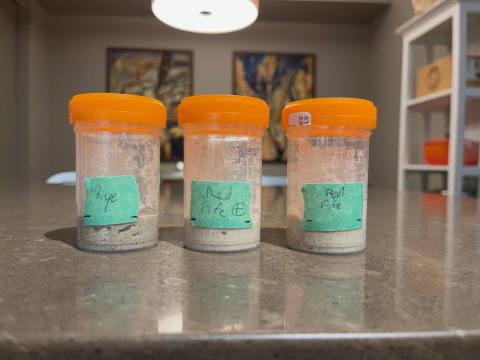 I think that this experiment confirms that one of the factors that makes rye a great food for starters is the fact that it has more amylase than other flours.  The greater concentrations of amylase makes more food available for the microbes in our starters than in other flours and is one factor in why rye is such a great flour for feeding starters.

By adding diastatic malt at 2% to whole red fife, I was able to get a greater rise from a feed with red fife than feeding just red fife alone.  In fact, I was able to get a similar 2.6x rise in 6 hours where it took the rye 6.5 hours to reach that rise.  However, the both red fife levains peaked while the rye was still rising.  Therefore, unsurprisingly there are other factors at play that make rye such a great flour to feed our starters beyond just its amylase concentrations. 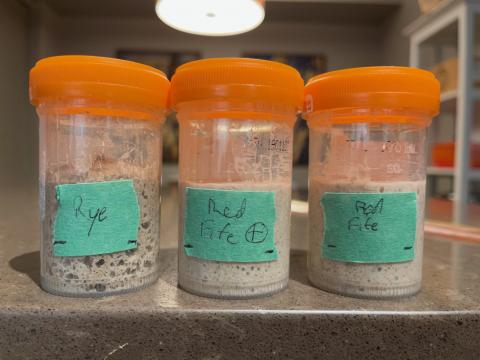 Have you seen this? https://youtu.be/stGtQCAXgfw

I forgot about that video, I saw that last year when foodgeek posted it.  Slightly different than what I wanted to show but certainly along the same lines.

This is an interesting comparison. However I'm not sure the height/time of the peak is very informative for the question you are asking, when comparing rye and wheat... Rye has very different "material" properties, effectively no gluten, different water absorbance (higher, so effectively rye starter at the same hydration is less hydrated than wheat), different ability to trap gas... It also has a different nutritional and enzymatic content, which is, as I understand, more what you are interested in. But that would be difficult to disentangle.

Also, I think even for the amylases, the enzymes found in rye and in barley (I assume your diastatic malt was from barley?) are different, one has more alpha, and the other more beta amylases - I think! Can't easily find a source for that fact that I saw somewhere...

You’re completely correct Ilya, I’ve probably over simplified the whole idea so this might not be very useful and not a well designed experiment after all.  The only thing it demonstrates is that adding diastatic malt to a levain can make it ferment more quickly and that isn’t that surprising after all.

Now I am trying to think of a better experiment along these lines, but can't come up with anything that doesn't involve counting CFUs of yeast ans LABs...

Benito,  I think your experiment is quite interesting.  I use a 100% home milled wheat starter and yes it does seem sluggish.  One question I have wondered is whether a "sluggish"  wheat starter will do better with a wheat flour loaf than a more active rye starter.  I know that some have suggested that the starter use the same feed as the final loaf,  I don't think I have seen any experiment to see if that is accurate.

I can’t say that I’ve seen evidence that using the same wheat to feed your starter will make a better dough using the same type of wheat.  I think in general whichever starter has the most microbes so that the levain and dough are vigorous will make the best bread. So for me and my rye starter, I have been able to build the most active levains than I ever have before regardless of the flour composition of that levain.  And those levains have gone on to make. very vigorously fermenting doughs.

Other than anecdotes such as above, I’ve not seen any evidence to support this either.  I haven’t researched this though and perhaps someone has seen sone research evidence.

Although anecdotal, experience has me believing that the microbes are not finicky. I switch flours and grain at will. My starters don’t seem to miss a lick.

For example -
My rye sours are made in a single (100% extraction whole rye) feed. The more I work with starters the less I believe they are sensitive. I don’t see them as picky eaters.

"Fermenting" is an interesting word and concept that I've been mulling over lately.

It seems that the gist of this thread is trying to measure gas production. Which is nice... but what does fermentation do to the grain? Which grain? Why do we have to ferment wheat to make bread instead of diastatic malt? Is the production of gas the primary concern?

I love the picture of the three jars of starter and the different size holes. And I absolutely admire folks who take the time to do experiments! Thank you for that!

Benny, IMO there is something more important than rise. But unfortunately it isn‘t easily quantified and that is gas production. I realize we use rise because the results are easily measured. Maybe the mind and training of a physician can come up with something... What interest me the most about your image is the relatively equal heights of rise, but notice the large alveoli in the rye starter. Since the air filled cells hold no dough, why is the rise nearly equal to the other two with no large bubbles? Shouldn’t the displacement of the large alveoli increase the volume, assuming all starters were mixed to the same weight?

If we can measure the gas produced, we will better be able to compare the lifting power of our starters. I have learned through the years that we can manipulate our starters (temp, hydration, flour, kneading, etc) to make them rise higher.

Your test brought these thoughts to mind and are no way intended to diminish your findings.

I also noticed large alveoli in my rye starter and lack thereof with wheat - I think it's because rye doesn't hold shape so well, and small bubbles easily fuse. Only some thicker walls will stay longer and maintain the bubbles.

Would gas production be relatively easy to measure by making the starter inflate a bag/glove/pick your stretchy object? I guess you can tap it  on the table after to release the trapped gas in the bubbles, but that is also directly related to the level of rise.

One could even connect the starter jar to a measuring device, or even just a syringe, to measure the volume of the gas.

Ilya, I use a latex glove often, but it is difficult to purge out the exact air to adjust for equal measurements of different starters when comparing more than one.

Do you or anyone else have other ideas that might work?

Could we use something like a small “S” shaped glass tube that would have a certain amount of water added into the curved portion? Could we use the height of that water to compare gas production? I am not scientific. All I have is common sense to work from.

Yes, I was thinking along the same lines with an S-shaped tube. But I think making a hole in the lid and attaching a syringe might be better... I hope the friction of the plunger in the syringe wouldn't be a problem...

I can't say for sure, but I think the difference in air pockets of the rye starter vs. either of the wheat ones has to do with gluten proteins vs. whatever rye has (can't remember the name, but it's not gluten). Rye gets more sticky than wheat flour when wet, and I expect that is as much to blame for the big bubbles as anything.

Gas production would be linked directly to sugars, so a malted flour *should* have higher (or maybe just quicker) gas production than its non-malted counterpart. And of course different flours will likely have different starch contents, producing nuanced results as well.

I guess we could measure weight loss over time.  I wonder if my scale that measures to 0.01 g would be sufficient.  I could consider running this again and see the rate of weight loss of each of these again instead of rise.

What do you folks think, is it even worth doing?  Based on what Abe was saying I’m having some doubts about the utility of running it again.

Benny, I don’t see a post from Abe on this subject. Please reply with the link you are referencing.

As far as weight, you could increase the total flour to 50g and anticipate a 1g (2%) weight loss. Your scale would probably be fine in that range. I really like the inexpensive 0.01 scales. They seem reasonably accurate. Very few of us with the exception of those like Doc are setup for Lab quality testing. Doc and I both both Lab scales at the same time about a year and a half ago. He kept his. I returned mine. It was way too much of a hassle to use. Too sensitive.

Sorry Dan, Abe and I posted over here on Breadtopia.com

Yes you’re right I’d have to increase a bit to make the measurements more accurate at the 5 g:10 g:10 g that I did 2% would be 0,5 g and although my scale measures to 0.01 g I’m not sure how accurate it really is.  I might try running it again when I have some free time.

Wow Abe and I made very similar points independently, I am proud of myself!

it doens’t surprise me at all Ilya, you are a scientist and very knowledgeable.  I’m a clinical physician and not a lab scientist.

Thanks Benny, but I am pleasantly surprised, Abe is infinitely more experienced at baking and starters than me!