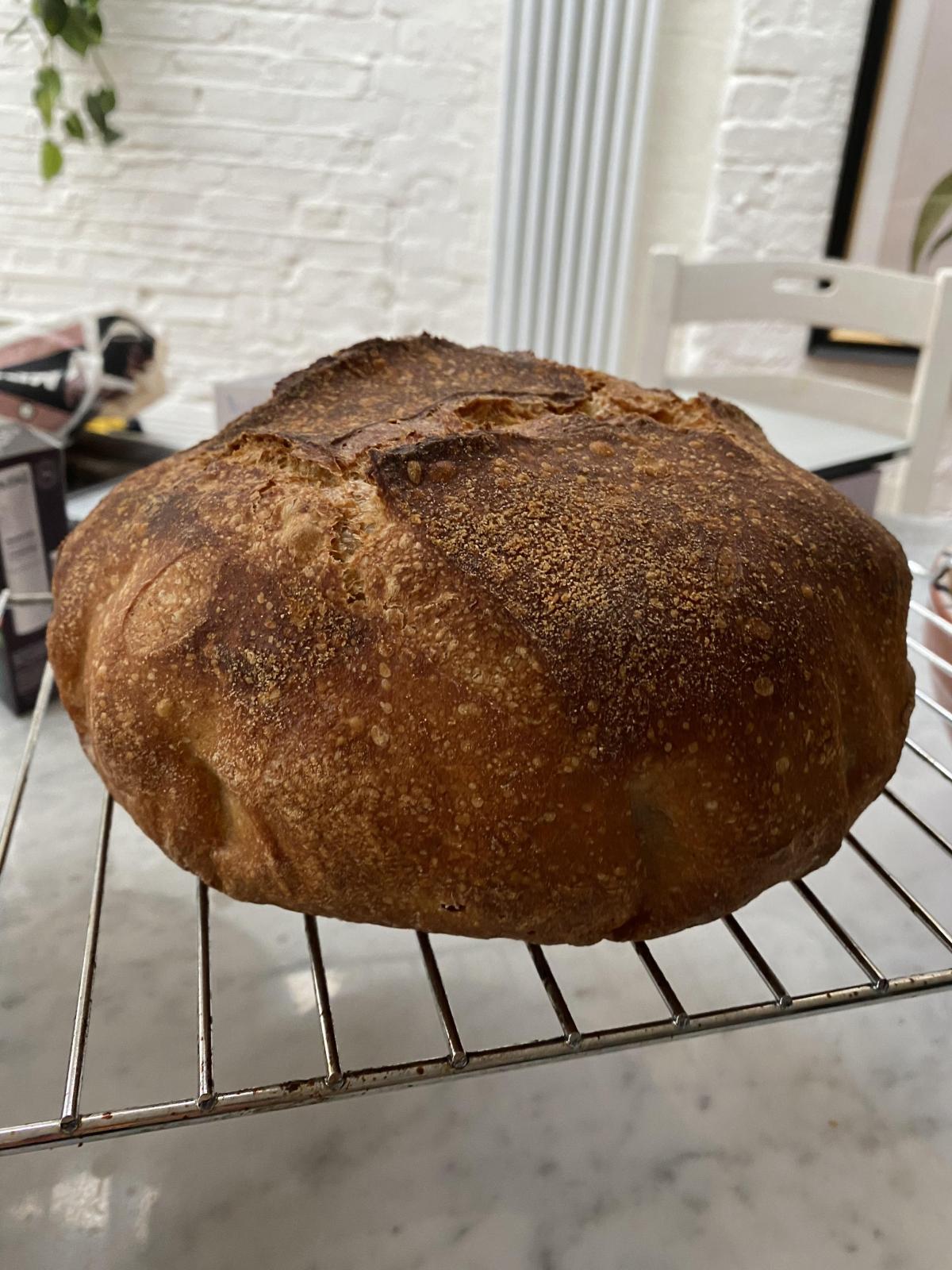 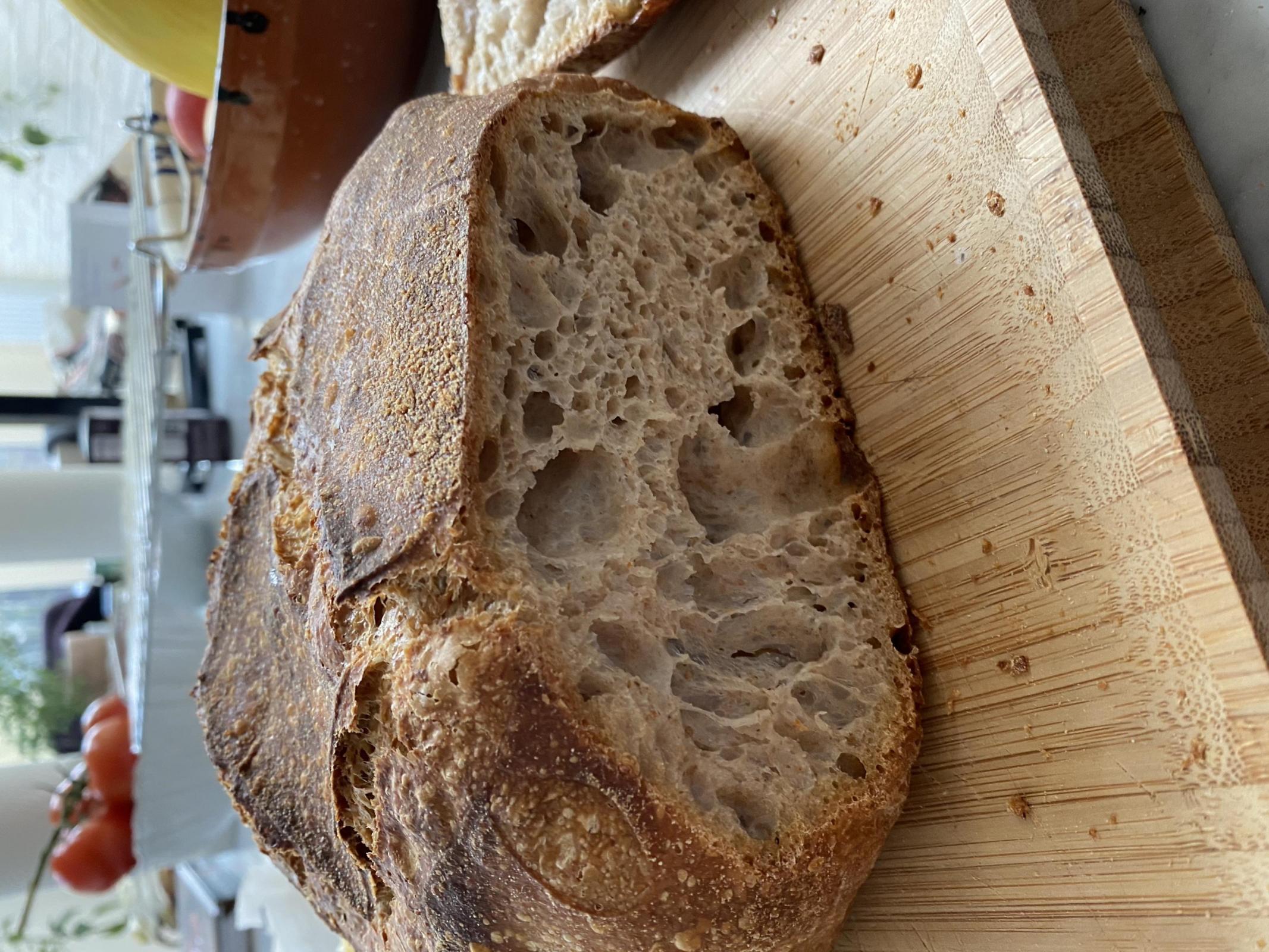 Hi there, I have been baking for the last few months and am trying to hone in on the ideal technique and recipe for bread I like to eat.  I made one this week and last week and although they tasted pretty good (need to work on getting slightly more sour flavour) they didn't really dome up like I thought they would and look a bit squished from the side.

Is it a shaping issue or a scoring issue?  Both?  Or something else going on?  I think I could have scored deeper and more confidently. Relatively confident about the proofing time (although happy to get feedback on the crumb structure if you disagree).

Your help would be really welcome so I can learn and improve next time.

For ref the formula & technique was based on Tartine basic country loaf with a few tweaks:

Note that I have been making sourdough for a few months but always batards which I have now got a good rise on.  I have recently got a boule shaped banneton and I am giving it a try.  Would love to be able to do both!

Thank you all amazing bakers

The exterior crust says that your formula is too wet and that you baked it too hot.

Lack of oven spring is usually from over-fermentation, and the crumb photo seems to support that. Not enough to ruin the loaf, but enough to cancel out the oven spring.

Net: less water, less fermentation, and lower bake temp will likely move things in the right direction.  250C is (usually) too hot for a loaf of 90% white flour. 230 would be better.

Just noticed that your starter or levain is whole wheat and rye. Those grains supercharge a starter, so maybe cut back from 20% to 15%.  Or go with 50% white and 50% WW as Robertson says.

You also don't say how long your autolyse is. Autolysing with your super-charged starter will also tend to over-ferment.  So use the recommended levain, or autolyse without levain, and add in levain and salt after autolyse.

19 hours in fridge is also a long time.  If your fridge temp is over 4 C, the dough still ferments, it does not truely stop.

Sometimes when I'm less attentive than I should be to my doughs on warmer days, speeding up their activity, I find myself with final bakes somewhat resembling the original post on this thread. I've always thought it was a problem with slight over-proofing, but you were able to tell from the photograph that it was over-fermentation. What indicators in the crumb photo tell you it is over-fermentation rather than over-proofing? Are there specific indicators in the bubbling pattern, or shape of the sides of the boule? Any personal tips & tricks for identifying optimal fermentation? I'm still working out my alternate timing and ratios for when the weather doesn't cooperate with my formula so any advice is greatly appreciated.

Sorry I was not clear.  But, perhaps you also misunderstand a concept:  Fermentation happens during both the "bulk ferment" and the "final proof."

When we say "over fermented", sometimes the "adjustment" can take place in either bulk ferment (first period)  or final proof (second period).  Which of those periods (or both) "went over" needs to be figured out by you.

Fermentation does not stop in the fridge, it only slows down.

IOW: "proof" equals "fermentation".  That's why we use two words to describe those periods.  "bulk ferment" is the first, and is called "bulk" because the dough has not been divided up yet into individual pieces.  "Final proof" is the second, and is called "final" because it is the last period.

But they are _both_  periods where _fermentation_ happens.

Which you need to adjust, I don't know. You have to figure that out.  I'm guessing a little of both.  Your levain may be too strong (for the times you're giving things), and 19 hours in the fridge sounds too long for this formula. But those are just guesses.

40 degrees F seems to be a magic number for sourdough. If your fridge is 40F or more, the fermentation will happen noticeably faster than under 40F. But it still happens under 40F.

How you adjust is up to you, and is usually found via trial and error. These things can be played with to juggle them so they fit in your time schedule:

It's all intertwined. Any one of those things may turn the trick for you, or a combination of more than one.

In my 1200 gram (total dough weight) 90% WW loaves, I use about 7% starter/levain, about a 4 hour room temp bulk, shape, then 12 hours in the fridge.  WW ferments fast, and my starter is strong, so I only need 7% starter/levain. And I autolyse (or just "soak" some would say) the flour for 60 minutes with no starter/levain.

Welcome to the adventure!

Incredibly helpful.  I have been overproofing I suspect for months then... my starter is incredibly active and I think stoneground flour also speeds things up.  Also I have a new-ish oven that gets red hot.  My autolyse was indeed with levain so I guess that didn't help.  Will do without next time.

I will try another loaf this weekend with less levain, less water, lower oven temp and really watch that dough in proof to take it out earlier as needed...I love all these mini adjustments it makes the journey rewarding and endless!  I just need to stop looking at 'perfect' crumb shots...