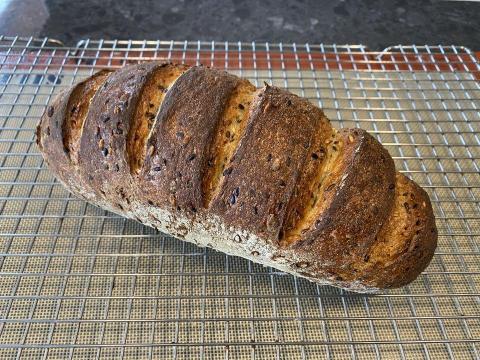 This is Hamelman’s Five-Grain Levain. I used the same grains as per the formula; cracked rye, flaxseeds (sold here as linseed), Sunflower seeds and oats. I made the cracked rye by milling the rye very coarsely, then sifting with a 40# mesh sieve.

I recalculated for a 750-gram dough (to suit my banneton) and have included the formula below.

I mixed the final build of the levain about 5 pm the day before and made the soaker at the same time. The levain and at its peak by 7 am the next morning.

The flours are bread flour (11.5% protein) and home-milled whole-wheat. The overall hydration is 98%! I mixed and kneaded by hand and tried not to add too much extra flour, but it was a struggle not to as I had to keep flouring my hands to keep them dry. The dough was very sticky but became less so after 15 minutes of stretch and folds.

I was not intending to retard the proof, so I chose to bulk ferment for 1 ½ hour with a fold at 45 mins. Shaped into an oblong and proofed for 1 hour at 25C/76F.

I scored the dough laterally with a serrated knife and baked. The dough held up reasonably well when moved from the couche to the peel and scored.

The bake went well with a good oven spring and the loaf took on a nice rich colour. I allowed the loaf to cool before slicing.

Tasting: Hamelman states “This is one of the most delectable breads I have ever eaten”. A big statement which is why I wanted to bake this. I was not disappointed, the flavour from the overnight levain added a lovely character and combined well with the choice of grains. The small amount of IDY did not detract and helped to create a medium-light crumb. The aroma when slicing was enticing. 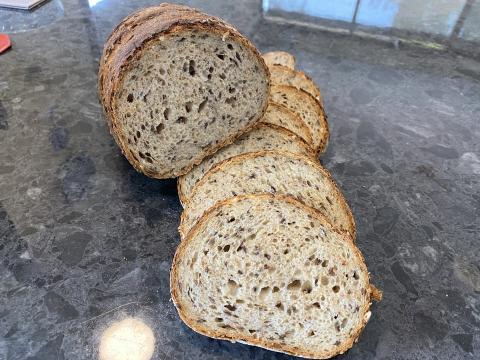 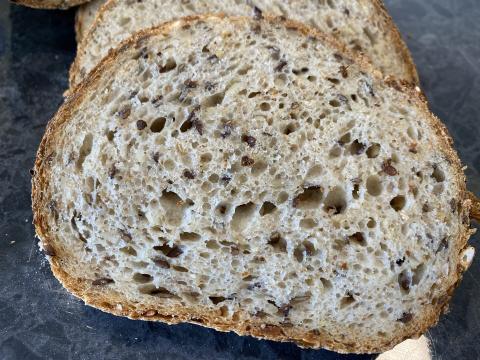 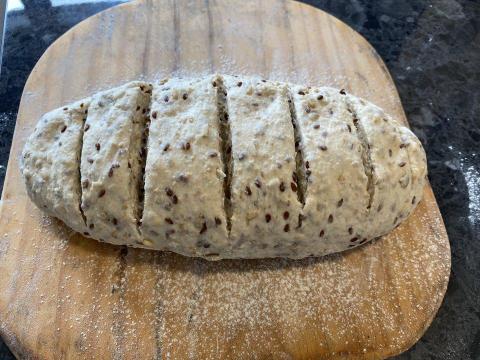 Thank you, David. I've gone over a lot of your submissions and advice comments and picked up a lot from you.

Very nice indeed! Gotta love this recipe. And fully agreed it works best with a retard for several hours. One minor point (minor as it didn't affect your bread in the slightest) is that Hamelman suggest if one does wish to retard the loaf then to miss out the added yeast and extend the bulk ferment to two hours instead of 1.5 hours. He does this to prevent over proofing in the fridge but clearly yours tunred out perfect!

Thanks Abe. Yes, I read the retard instruction in the book. He suggests a bulk fermentation of two hours with no CY before a retarded proof. What I'm hesitant about is the refrigerator temp for a retard. My home refrigerator is about 4C/39F. Is that too cold for a retard? My science reading is that fermentation pauses under 7C, whereas a retard is a slowing down and best about 10C/50F. But it worked well for you the other day. Something to think about. Cheers.

Because it turned out so well. I'm not sure about the temperature of my fridge but from my understanding it carries on for a while before coming to a halt. About 30 minutes to 1 hour depending on your fridge. What I do is leave the dough out for about 30 minutes then refrigerate so it comes to a halt at a perfect time. But that's just a process what i've worked out that suits my situation. At the end of the day it's whaever works for you.

Wow Gavin, beautiful loaf you baked there.  The cross sectional profile is so lovely, what great oven spring you achieved.  I’m sure it is as delicious as Hammelman says.  I haven’t baked the 5 grain since the CB I’ll have to bake it again I do remember it being a great bread.

Thank you, Benny.  The previously seeded bread I baked last August was a different formula that I didn't like. This one tastes and feel fabulous.

Perfect in every way.

love the scoring and the resulting round shaped slices.

Thank you, Danny. I'll be making this one again for sure.

A nice looking crumb and I like the way the perpendicular scores maintained the hoop strength. I had to reduce the percentage of pre-fermented flour in my version to keep it from over proofing during the overnight retard. A nice addition to TFL 5G week.

Thank you. I heard Hamelman say in a recent video that he scores seeded bread in this way.

Thank you. I started the recipe not knowing what to expect but very pleased with the result.

But it wouldn't take that long to finish it! Wow! Really great! Ok.. perfect! Well done!!

Thanks for your kind comments. I had a couple of slices for lunch today with ham and cheese (trying to use up the left-over ham from Christmas). It really is the best grain bread I've tasted.

Hi Derek, I saw Hamelman score a Deli Rye with carraway bread this way on a video. He also said that he likes to score seeded bread this way also. He looked like he scored quite deep with the serrated knife, so I'm doing that also, although I may have got a bit over-excited :)  I scored the dough just before loading into the oven.

This 5-grain levain is definitely worth the effort. It's been cool here the last few days, but warming up again by Friday. I think we'll be getting your weather.

Here is a short clip with James Robertson Justice  ( scoring  )

Ha Ha. I love old English comedies. This is a beauty.

Nice bake.  This bread seems to be the unofficial CB of 2021.  Three bakers in a row chose this, so the universe must want people to bake it.  I've recently picked up a manual flaker and this seems to be the perfect loaf for it.

Thank you. Yes, it seems to be a TFL 5G week at the least as member MTloaf named it :)

I look forward to seeing your bake.

Both the raw dough and the cooked bread are beauties! As others said, I also love the round slices.

Thank you, David. The baked worked out better than I hoped.

Scoring this way really appeals to me since hooking up with it for the deli rye breads.  Really nice crumb, and the flavor can't be beat.   Someone earlier said that this bread is a meal by itself.

Thank you, Alfanso. Likewise, I saw Hamelman score deli rye with carraway on a video. I remember also he said that he likes to score seeded bread in this way. I really like it also.