Am I overheating my starter?

Am I overheating my starter?

I recently got a thermostat controller and a heating pad to use for starter maintenance and dough proofing. This helps a lot in cold Edinburgh winter, however as everything, there is a learning curve.

My setup is very simple: heating pad on the bottom, then a piece of cardboard (optional) so I don't place the starter directly onto the heating surface, all inside a cardboard box. And the temperature probe, which I have been unsure about where to keep inside the box: temperature it reads when on the bottom (either directly on the heating pad, or on the cardboard on top of it), or somewhere in the upper part of the box are quite different - for example, 28C on the bottom, and 23-24 on the top. So I finally decided to just attach it with tape to the side of the box in the upper third, and set to 24C. But actually it seems that this causes the heating to almost never switch off.

Yesterday and today I was building a 2-stage bread flour levain from a refrigerated rye starter: first overnight approx 1:2.3:2.3 (doubled by morning - a bit low ratio for overnight, but the starter was not super active, so I thought I'd give it an easier time), then 1:1:1 for a quick build planning to mi the dough in early afternoon. When I was making the second stage I thought the starter seemed a bit different than usual, more liquidy. I thought maybe it overfermented a little, but it didn't look like it had peaked and fallen. But then the second build still hasn't doubled in 8 hours. The slow growth got me worried that during the day my proofing setup is overheating it, which would be in line with more liquidy consistency than normal. While during the night it's a little colder in the flat, and maybe it's not too hot for the starter. But I also measured the starter temperature directly around 3-4 hours after feeding, and it was between 27 and 28C. I repeated the measurement just now and got 28C exactly. That seems like a good temperature. It is possible that the layer on the bottom is warmer though. Could it be a problem? Is this too warm?

Should I change anything in my "proofer" setup? Probably, getting a fan would be beneficial, but then I also need a more insulated box :)

For now I simply turned down the temperature setting to 23C instead of 24C, since it seems then the heater sometimes comes on, and sometimes comes off... So less chance of overheating, I guess, but still stays warm.

Ilya, you could incorporate an inexpensive digital controller in your setup.

Also if the heating pad doesn’t work well for you you could use a small appliance lamp bulb with the digital controller.

Thanks, yes, I have a similar thermostat controller, which turns the pad on and off. The issue is I don't think putting the temperature probe into the dough or starter is a good idea, it would likely rust or otherwise degrade, and so have to somehow figure out a more uniform heating, perhaps, or find a sweet spot for the air temperature.

Re lamp - I was thinking about it, but not even sure where to buy and old-fashioned hot lamp anymore around here! Also, wouldn't put it in a cardboard box, definitely a fire hazard.

If it doesn't rust or degrade it might add something unhealthy to the dough.

I think the solution is mass. I'm using a heavy glass container so everything happens slowly.

Was just thinking - what if I wrap the probe in plastic and stick it into the dough? Not as convenient with the starter, but I think it would work great for bulk fermentation. Just need to be able to remove it cleanly.

Some plastic wrap. I thought about a plastic soda straw with some sort of plug in the bottom. Maybe RTV silicone for the plug or a tiny cork.

But I haven't found it necessary. If you control the environment temperature, the dough will follow.

Here in the good old USA, they sell heat lamp setups for reptiles.

I've got a similar setup using a coffee warmer instead of a heating pad. I also bought a little bluetooth thermometer so I can monitor the temperature remotely. That gives me confidence that the temperature of the dough is what I expect. I have attached the controller temperature probe to the 2-cup measure containing the dough and, on another occasion, to the side of the box. Both provided comparable results.

I don't think you're killing anything at those temperatures.

Gary the blue tooth thermometer is a great idea!

I bought this one: https://smile.amazon.com/gp/product/B07R586J37/ref=ppx_yo_dt_b_search_asin_title?ie=UTF8&psc=1. I like it because it is really small. It logs data, has alarms, etc.

That is neat, thanks for the bluetooth thermometer idea!

Yes, I was planning to use it, but I am pretty sure I checked in the beginning and it doesn't fit into the cardboard box I have...

Stupid reason I guess. Just get a bigger box! But then I think the heating pad will be too small for the volume... It's not a very powerful source of heat, and heats up quite slowly.

filled to the same level as the starter and stick the probe in the water instead?  Right next to the starter.  Not water? Try uncooked Rice.  Starter will also generate heat on its own if the mass is large enough.

For the thermostat probe? That's an excellent idea, thanks Mini! Even just a jar of water constantly there, with like an glove attached to the top, and pointing inside the jar, and the probe in the glove.

The glass of water in the proofer is a fine idea. However, I think the starter itself could be a degree or two or three higher. I just stuck the probe in my dough this afternoon, I found the middle of the dough was two degrees hotter than the ambient temperature. Not sure if that really matters.

Well, short of keeping the probe in the starter/dough (what if I have a dough and a starter there at the same time? which one do I use for temperature control?), which is very inconvenient having to cover the probe in some inert material, the water idea seems the best option to me! I think I'll try it tomorrow.

OK, this literally took one minute, so I just did it now 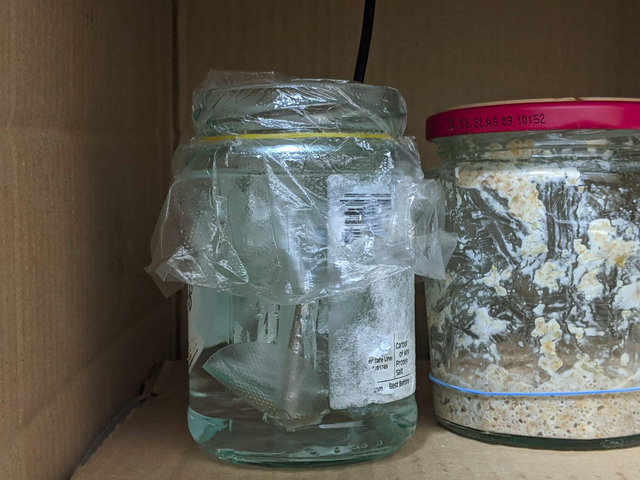 You would keep it at 80% hydration then?

I would feed 1:5:5 overnight normally.

Ilya, I use a similar setup, though in a wine fridge, not a cardboard box, and I use a piece of foam board between the heating pad and the starter and taped the sensor to the upper third of one of the side walls. As long as the foam board covers the entire heating pad, you shouldn't have a problem with overheating, at least I haven't .  What makes you think it is overheating, other that the reaction of the starter?

It should be pretty easy to check your controller ,  leave the sensor taped where you have it, then  put a glass of water in the box, and check the temp of the water 3 or 4 times every  hour or so, and it should be within a degree or two of what you set on the controller.  It is possible the controller is not functioning correctly,  Mine is a more basic model and seems to work fine. https://smile.amazon.com/Temperature-Controller-Centigrade-Thermostat-Thermistor/dp/B08BPHWRP7/ref=sr_1_4?crid=3FNIX5ID42KGZ&dchild=1&keywords=stc-1000&qid=1609375001&s=industrial&sprefix=stc%2Cindustrial%2C171&sr=1-4

Flour is food, water is transportation.  I tend to use more water (for feeding) when the ambient temps are cooler and less water when ambient temps are warmer.  That said, a thicker starter will eat thru the food at a slower rate.  At ideal proofing temps, with plenty of food, the inhabitants increase their numbers and make more byproducts until the food runs low. Temp and amount of food dictates which inhabitants will outnumber the others.

I find that when giving a mature starter, one that has risen and ready, a quick addition of a small amount of flour, will not raise the starter much but is only a quick snack and the acid levels stay steady enough to just suspend some declining activity for only a short while.  Use the starter soon or revert to maintenance feeding. The lack of rise after such a small feeding is deceptive, the starter will pack a punch when thrown into fresh dough which raises the pH levels.

Waiting too long to use after a small feed (1:1:1) for a starter used to being fed 1:5:5 leads to underfeeding if waiting for a rise indicator. Ignore the lack of rise and Taste the starter instead. A very sour culture will tell you the bacteria level is super high and a bigger feed or immediate use is the solution to getting a reaction off the yeast.