I am trying to make a loaf with 100% dark (wholemeal) rye flour. I have a healthy white flour starter and over the last week have been using that culture as a base to make a rye starter.

This is the appearance of the starter. I would describe is as smelling and tasting sour, but it has a "spongy" texture that is very different to my white starter. It passes the float test and is reliably doubling or tripling in size after a feed. 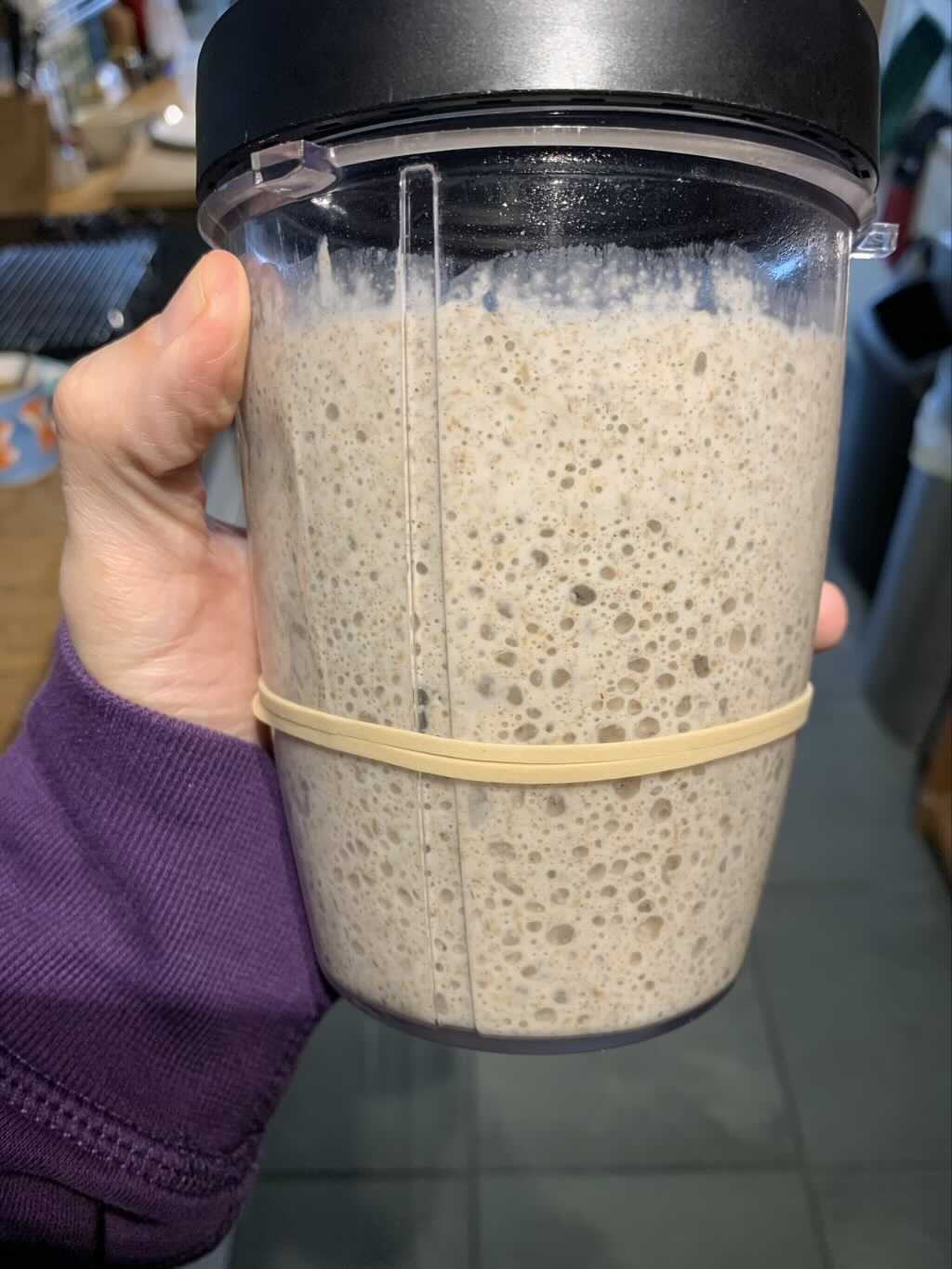 I've used a recipe that calls for 400g dark rye, 10g salt, 200g rye starter, 40g honey, 300g water. However, even after a half hour autolyse and fifteen minutes of attempted slap and fold, my dough looks like this - no texture at all, just total mush. 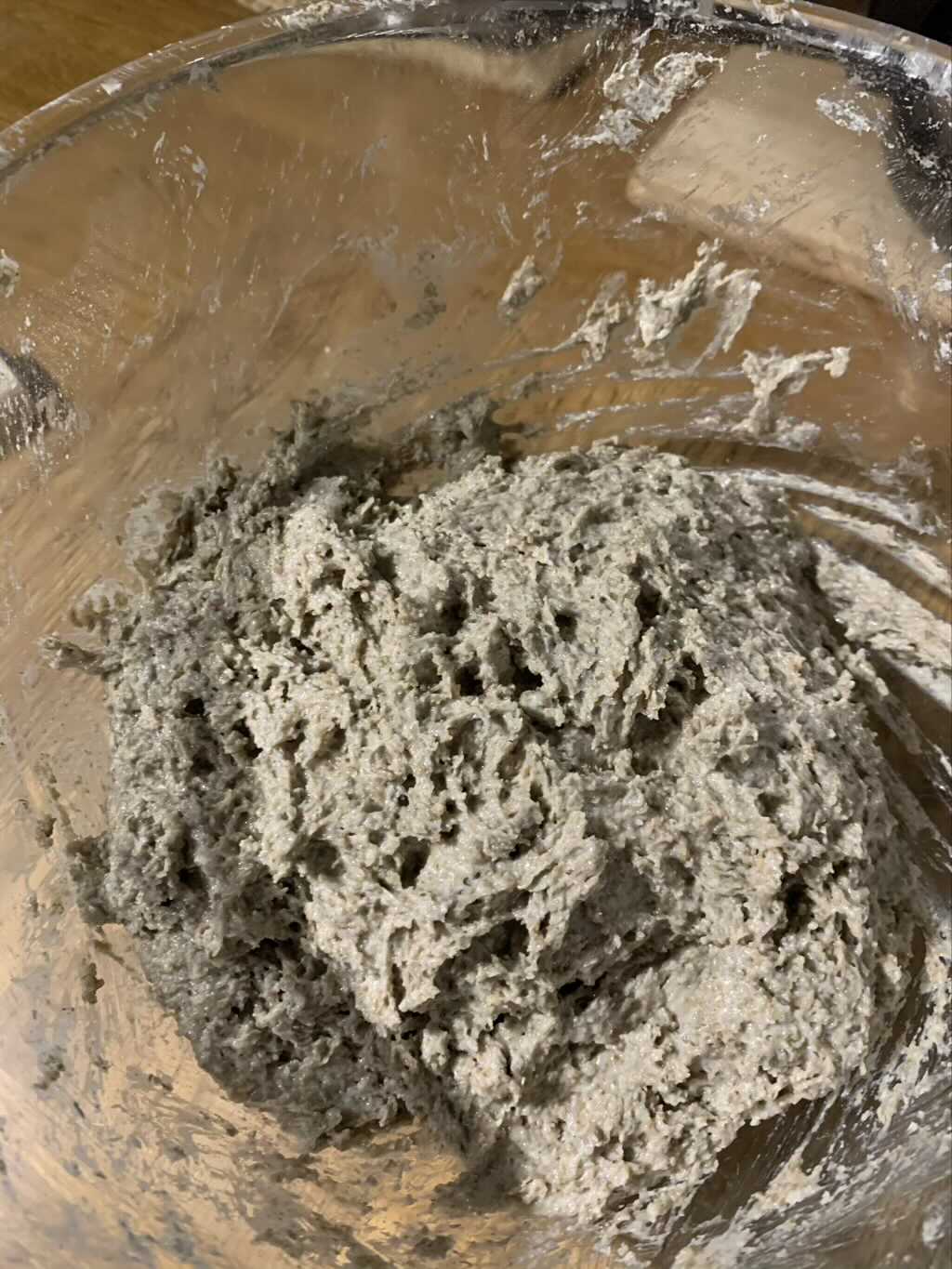 I would say that i've had a lot of problems in the past working a wet dough, I'm not experienced enough to understand why my dough sometimes doesn't form, and I've had some that have started to develop gluten and just fallen apart. Even the sourdoughs that I am happy with are often more pancakey than I'd like although I'd say I'm generally getting a decent rise now with white dough.

No point in doing slap&folds or any other form of kneading with 100% rye dough. There is no gluten to speak of in rye, and the dough has no strength. Completely normal. Just mix it and ferment! Easy-peasy.

Therefore, you most probably want to bake rye in a tin. It's possible to bake pure rye free-standing, but requires lower hydration and more experience, I guess.

Ah, okay, that makes sense. The recipe I used said the dough would be very wet but still recommended kneading it for twenty minutes. A lost cause in this case !

how long since you mixed up the dough/paste and what temp is it?

That picture was taken after the twenty minute knead, then another hour rest, but it was just like batter.

id say I’m at the “giving up and going to bed now” stage in the recipe, but have put the mush in the fridge and will either put it in a tin or recycle it as crackers

I think the air temp in here is about 21 centigrade, mostly my doughs seem to take longer than recipes say

In the morning double it up. So add enough extra flour, water and salt to make twice the recipe, mix it thoroughly and portion it out into two loaf pans. Let rise for however long it needs and bake.

No extra fancy work. Just mix, portion out, rise and bake as per Mini's instructions below. Rye is Mini's forte.

Wanna hear something funny... Glanced at the photos and thought that looks good for a rye and then I realised you were showing us the 'disaster'. Rye is difficult when you try to handle it like wheat. Fine when you handle it like rye - or don't handle it rather.

that's a useful perspective, thanks. It seems that my expectations were all off

Both the starter and the dough look nothing out of the ordinary.  If your 100% rye dough is a sticky messy batter you are doing it right!

In my hands, fermentation temps below 25°C don't work for for 100% rye because due to lower yeast activity extended fermentations result in enough acetic acid to mess up the taste.

At a bakery I've been to a while ago, 100% rye dough was kneaded/mixed for as long as any dough, not for the purpose of strength development, rather for softer airier crumb.

thick enough to free stand but to be on the safe side, butter up a narrow tall loaf pan and dust it with flour or raw seeds or bread crumbs.  Then get youself a medium sized bowl with a few inches of water in it to help with handling.  A good spatula helps too.  Lets see, scrape or spoon gently into paste into the loaf pan. Use the water to "grease" your hands and tools to make the paste behave.  It doesnt take much water.

Shape the dough into a loaf in the pan and make it rounded and domed.  Rye rises straight up, so if you want it flat on top, make it flat, but if you want it nicely rounded, wet the spatula and shape a nice dome making a deep grove between the pan and the dough.  Now wash up because when this rye dough dries on things, its like cement to get off.

Come back and look at the dough.  The dough now takes up about 2/3 of the proofed height, so cover and give it a few hours to rise the remaining third before baking.  Look closely at the surface of the dough.  Should look something like a mud pie.  When the smooth surface starts to get a little bit bumpy and maybe a bubble or two, tiny bubble or two start to work up to the surface and pop (pin holing) its time to get it into the oven.  Find a long screwer or toothpick, get it wet and poke holes as deep as you can about every inch all over the surface.  This is called docking.  Its to pop any large chambers of gas inside the loaf.  When done poking the loaf, wait a minutes and then smooth over the holes with the wet spatula, if you like.  Then into the oven.  Sound about right?

Thank you, I will have another run at this next week and will follow your instructions. I tried to make myself feel better and baked something simple instead, so I now i have more bread than I can realistically eat for the next week!

Or wait until tomorrow making a bigger batch when it has turned into a big starter as it will have over fermented in the fridge overnight.

(The above advice from other commenters is good.)

I see that this is your first post, so welcome to TFL!

And as my "specialty" here is "outside the box" thinking, I'll offer a couple other possibilities. Though what you see in the above comments are still the most likely things.

1. taking the flour's pre-existing moisture into account. While there is no easy and cheap way to measure moisture content at home, most cooks "hold back" some water from the recipe in case their flour doesn't hold as much water as the recipe-author's.   Flour can gain or lose moisture in storage along its trip to your pantry, or in your pantry.  It's easier to add water than take it out, so that's why some is held back.

Small millers, especially stone millers, generally don't adjust moisture level (pre-milling and post-milling) like the big commercial roller mills do.  Therefore.... flour from the smaller stone mills is going to vary more, year to year, farm to farm, batch to batch,  in terms of moisture than the same type of flour from a big commercial mill.

You may have just come across a flour with more moisture than the recipe author's.

2. There are two definitions of "dark rye".  The most common one is "whole meal", 100% whole grain, nothing taken out.

BUT.....  Bay State Milling and Stan Ginsberg have another definition. To them, "dark rye" is whole rye that has had a lot of the white endosperm removed (to make "white rye").  Then... so as not to let the rest go to waste, they sell the leftover (which now is effectively MORE concentrated in bran/germ than "whole rye") as.... ta daa... "dark rye."  Which is perfect for adding in a  small amount to a mostly regular wheat/white flour dough to get some rye flavor and color.

Hence.... if you used a Ginsberg recipe that called for (his definition of) "dark rye", and ended up actually using "whole rye", then your dough would have had a lower concentration of bran than what was called for.  And bran holds more water than endosperm, so your dough, lacking the expected amount of bran, would have come out over-hydrated.

Option 1 is the more likely source.  But option 2 is technically possible.

TFL actually had a case of the reverse of #2. The recipe meant/intended the "whole rye" meaning when it said "dark rye", but the baker bought Bay State Milling's "dark rye", so the baker ended up with too much bran and a too thick underhydrated dough.

Thanks for all the advice so far. I haven't re-attempted a rye bread yet, but I did forget about the "paste" in the fridge for two days, then just put it in a loaf tin just to be sure. The results are nice tasting

Did you get a little rise out of it?  How about that taste?

Either no rise at all, or perhaps no perceptible one to my eyes. I would say though that the crumb is acceptably soft/moist, and the taste is pleasingly sour, but also with a distinct rye sweetness. I have been toasting it and eating it with blue cheese and pickles