I decided to compare the following wheat berries in the 50/50. Each test used a single 50% Whole Wheat according to Maurizio’s instructions for his 50/50 Whole Wheat Sourdough.

A few pieces were sliced from each of the 6 bakes and frozen in labeled bags.

My granddaughter sat in on the test. She has a discerning palate. 6 plates where number and my wife, Patsy placed a slice from each bag in random plates. The results were informative for me, but when it comes to taste all things are subjective. 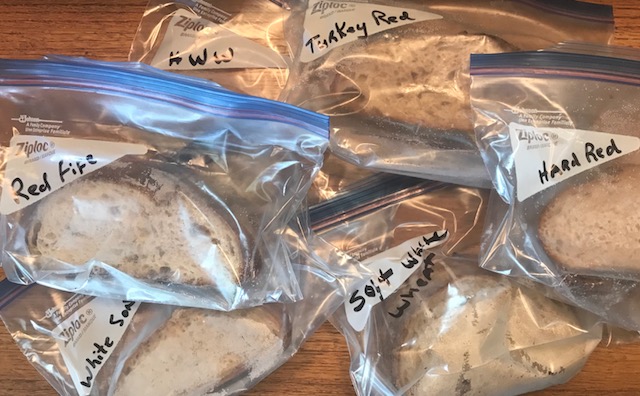 As expected , the white grains where most mild and the reds most intense. Below are our thoughts on each grain. It surprised us both that our opinions were often very much in agreement. 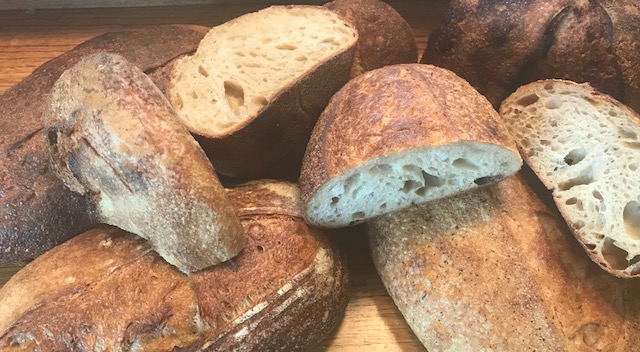 From most preferred to least.

#1 Turkey Red - We both agreed that this grain was our favorite by a long shot. The smell stood out from the rest. Very pronounced. Sweet, with a hint of cinnamon. I thought it smelled a little like fine pipe tobacco (my best description). Slightly bitter crust, soft textured and a moderate chew. Tangy and over all very complex. 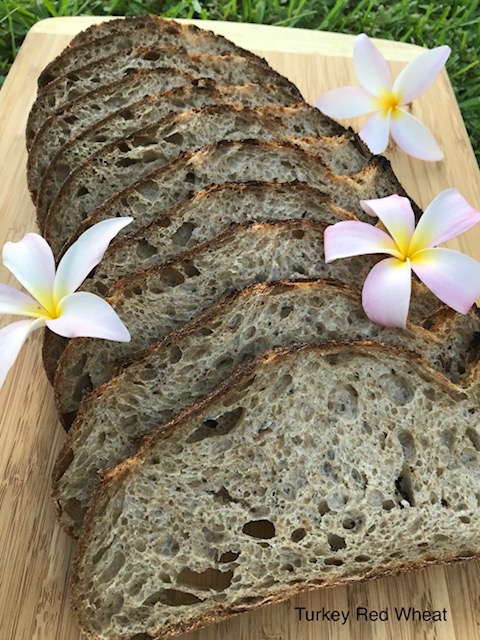 #2 Red Fife - This one had a sweet flavor. As you chewed the yogurt like flavor began to build in the back of the mouth. The more you chewed the better it got. It had a faint wheat smell and a medium texture, not chewy and not spongy. Actually the crust on all of the breads had the slightest bitterness. I really think the dark bake attributed to that. 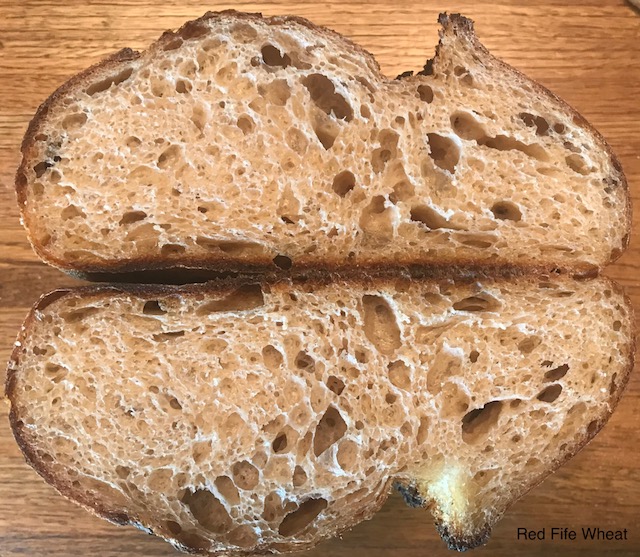 #3 Hard Red Winter Wheat - We thought this bread had a very nice and noticeable acetic tang. Like the Red Fife, the flavor continued to build with each chew. It smelled of mild wheat and was medium dense. Side Note - notice the different layers of color in the crumb below. I think it may be because of the diastatic malt. I used the full 1% for this, the first bake, but omitted it completely for all of the rest. If you have a different experience, I'd like to hear from you. 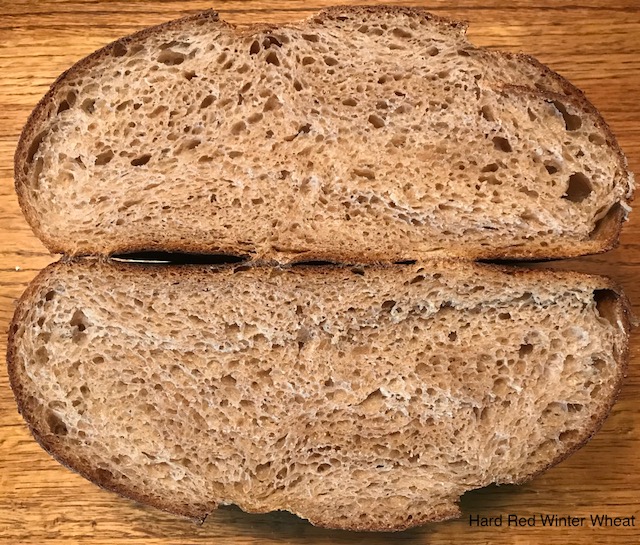 The remaining 3 grains are all white. It seems we strongly prefer the more robust flavors of red wheat. For those that prefer a more mild flavor the bottom 3 may be more appealing. The closest to store bought white bread was definitely the White Sonora. It have a very clean flavor that was mild in all respects. The last rankings are difficult since we favor the Reds so much.

#4 Sonora White - We placed this at the top of the 3 whites since the flavor was so clean. For those preferring a mild sandwich type bread, this may be the ticket. It absorbed water well during the mix and produced a fairly strong dough similar to the Hard White Wheat. Key descriptive word is, mild. 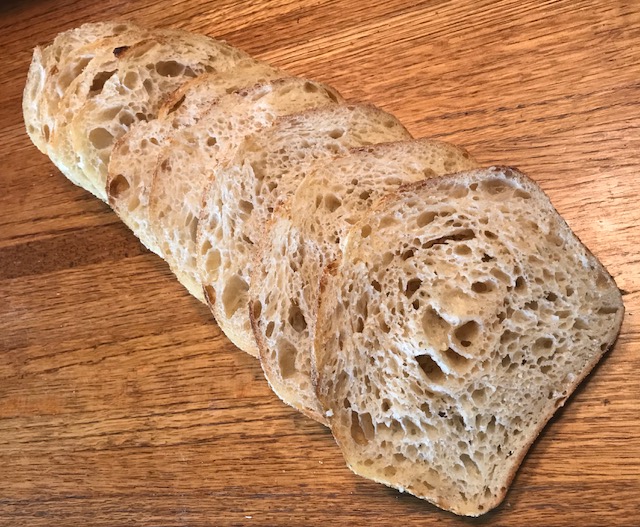 #5 Hard White Wheat - Non-eventful (to those that like the strong flavor of Red Wheat), but it did have a light tang. Once again, a mild flavor, which can be a great thing for those looking to bake a 50% whole grain bread and not run off the average person :-)) 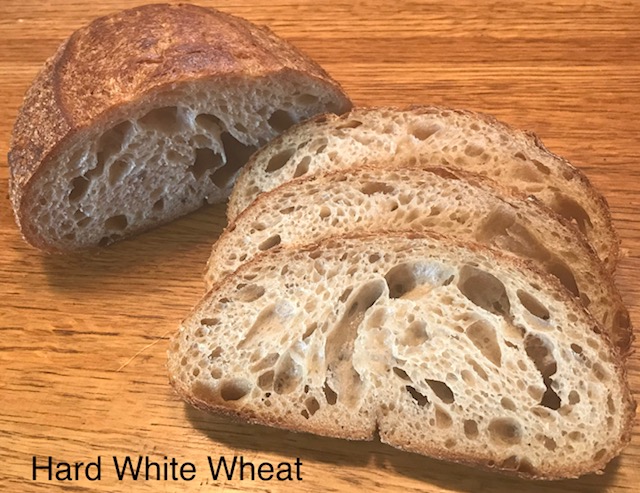 #6 Soft White Wheat - It had a mild taste. Taylor thought is was slightly malty, which was nice. This whole grain does not absorb a lot of water. I had to reduce the water and also add additional flour during the mix. The dough was more slack than the others, but boy, did it spring in the oven? I am beginning to think that weaker gluten springs better. I imagine the weakness can work to a benefit. Not sure about this, but it is my present thought at this time. I think this is why Trevor uses such a long premix for his Champlain. 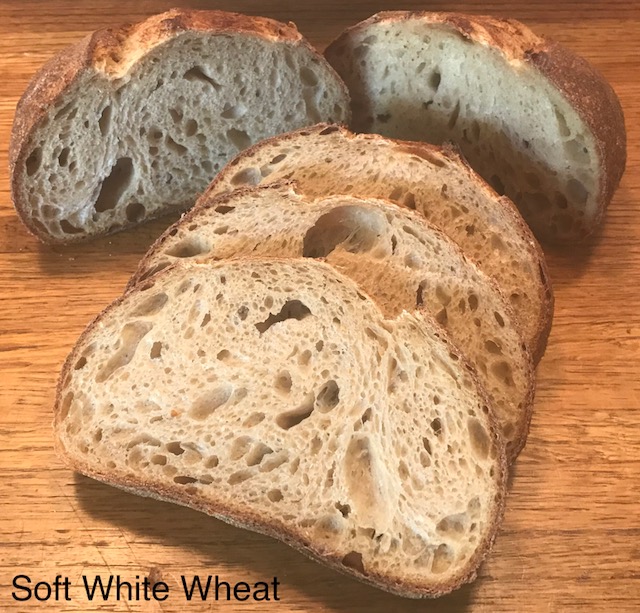 Everyone's taste are unique. It is possible that your choices would be just the opposite as our's. Neither of us are professional taste testers, but we know what we like. I hope you find something valuable in the review.

I want to thank Maurizio for sharing his formula, it seems that many participating in this bake are giving it rave reviews.

Hi Danny. Love that you did this! Turkey is my favorite, too :) I'm going to try mixing some breads using Sonora and Soft White as I have both on hand. I would not have thought to use soft whites in these types of breads, but there are a lot of people who don't love red wheat. (Sadly for me, my husband is one of them, haha!)

I recently made a loaf with 100% Rouge de Bordeaux and absolutely loved it. As compared to Turkey Red, it had similar but more distinct baking spice notes and was very smooth. I'm anxious to try it in some other formulas.

As you said, flavor perception is highly subjective, but I think this test will be of interest to the growing legion of home millers. It can be intimidating deciding which varietals to allocate money and storage space to. Thank you, once again, for all you do to benefit this community!

Danny, your insatiable curiosity and persistence has really paid dividends.  That you can produce such pretty loaves with wheats that I couldn't make a pancake with (Red Fife, SOFT!? White) attests to the level of expertise you have attained.  As you know, I've relegated our Red Fife supply to pastries only since that's what it appears to perform best for, for me at least.  Not bread.  And I'm stunned that you could get anything resembling bread at all with soft wheat.  Now you're just showin' off ;-).  I'd have to be pretty desperate to use soft wheat for bread.

Congratulations and thanks for posting this tasty review.

I’m not sure where you are finding the time to do so much baking.  between all of these 50:50 breads, then your Livieto Madre consuming > 12 kg of flour and then rye breads, I’m not sure that you sleep.

Thanks for taking the time to do this testing.  I wish I had access to Turkey Red, but as a consultation prize at least I seem to be able to get Red Fife.

Danny - thanks for this. It's insightful and I'll bookmark it for future reference!  Very helpful!

Great work! I haven't dared making bread with my soft white wheat but you're inspiring me to try!

Coming late to the party but I'm finding such incredible work everywhere on this site - not the least of which by you, Danny.  I agree - your breads are inspirational, adding to the wonderful sensory notes.  Thanks.

It's likely a dumb question, but were your breads all made with 100% of the wheat in question (e.g. a white flour Turkey Red, and Whole Wheat Turkey Red at 50:50, or did you use a set white flour (or flours, e.g., KA as Maurizio set up), with your varietal as the whole wheat component?

Turns out locally I can get weekly Turkey Red, as well as spelt and rye.  The Turkey Red is offered in both bolted and whole grain flour.  You've definitely gotten my attention!

Paul, this formula and method was used for all breads that were compared in the original post.

” Each test used a single 50% Whole Wheat according to Maurizio’s instructions for his 50/50 Whole Wheat Sourdough.”

You are very fortunate to have a local source of a variety of flours. No such opportunity anywhere near me. Thus a mill and exorbitant shipping fees. Thank God the berries store well!

I do feel lucky, Dan.  Thus far I've held off on milling but I'd love to buy berries too.  I love Central Milling, but yeah, shipping is a killer.  I hear you.

Gadjo:  For the 50% white flour portion of the formula, Dan would have used store-bought white AP and white Bread flour (as specified in Maurizio's formula), not a bolted/sifted/"white" version of the whole wheat that was being tested.

Perfect.  Thanks Dave, it does.  Looking forward to this.  Cheers, Dan.