This is my first bake of rye at this percentage, prior to this I have only used 5-10% in my sourdough breads.  I’ve followed Eric’s original recipe but followed Dan’s procedure building the gluten before adding the levain, salt and holdout water.

The crust is soft after it cools and will slice better the next day. If you need bread that will stand a few days, this mix is good for mailing across the country. Sealed in a plastic bag after cooling, this rye will be great 4-5 days later and freezes very well.

Mix and set at room temp overnight. (If this stage will longer than 8 hours I suggest refrigerating after 3 hours and warming to room temp before proceeding)

Mix bread flour, water (minus holdout water), yeast and sugar using a mixer.  Once incorporated let rest for 15 mins.  This is a stiff dough.  Then mix on low speed to build gluten.

Transfer the dough to a well oiled bowl and continue bulk fermentation 80ºF for about 1 hour or until the dough has at least doubled.

Once bulk is complete and the dough has at least doubled pre-heat the oven to 500ºF with the dutch oven inside.

Transfer the batard to your final proofing device.  I used a cookie tray with bottles of wine on either side, then my couche and then a sheet of parchment paper.  I placed the dough seem side down onto the parchment supporting the sides of the dough.  I brushed the surface with water and put poppyseeds on the outside of the dough.

The dough was left to final proof at room temperature.

After about 45 mins when the oven was ready the dough was lifted off the couche using the parchment as a sling, placed on the countertop and scored with a bread knife.  The dough was then transferred to the dutch oven and the lid placed on top for steam.

A glaze of cornstarch and water was brushed on the crust.

The bread will be left until the next day to slice. 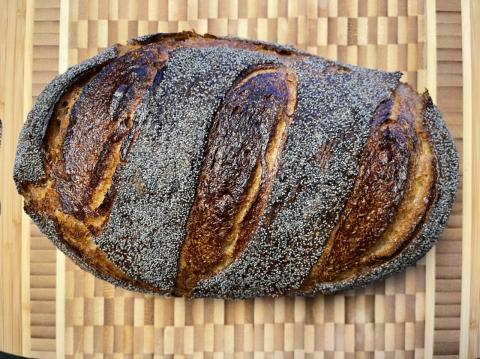 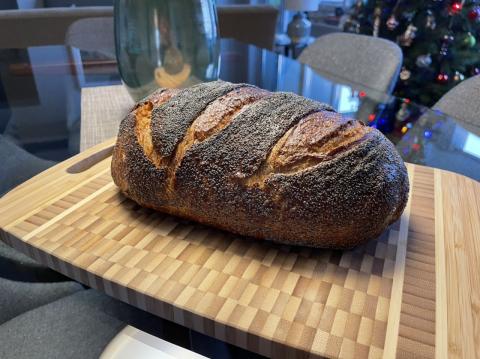 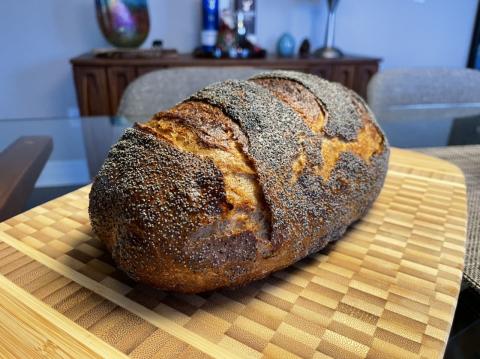 That looks gorgeous. Looking forward to seeing your crumb, I'm sure it'll be great, and delicious.

Thank you Ilya you are always so kind and encouraging.

I’m quite pleased with my first bake of Eric’s Rye.  The crust wasn’t too thick and had a nice crisp crunch.  The crumb was relatively light, yet moist without being gummy at all.  It had a nice mild rye tang and I’m glad I went with the poppyseeds rather than the more common caraway seeds as they aren’t my favourite.  I think I like rye more without the caraway component.  I will keep this in my rotation of baking especially given how super fast it is to make.  I can’t believe it started a bedtime and was done early morning!

I want to thank Dan for his suggestion to fully develop the gluten before adding the rye sour.  I suspect that contributed greatly to the success of this loaf for me.

The bread is great for a sandwich and particularly good with some Eataly roast pork. 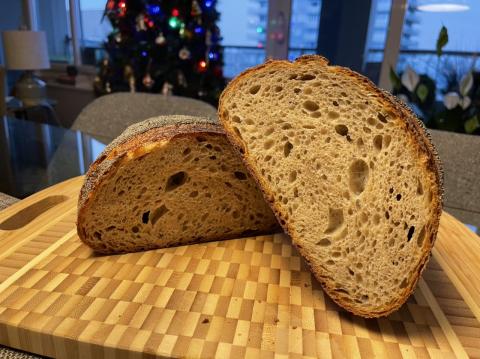 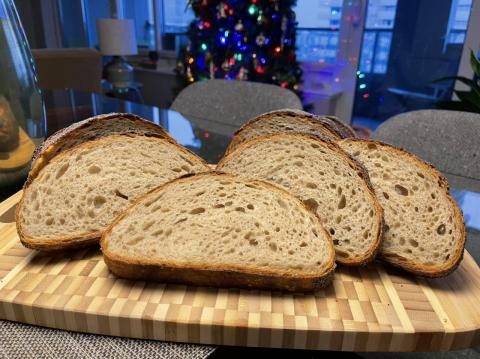 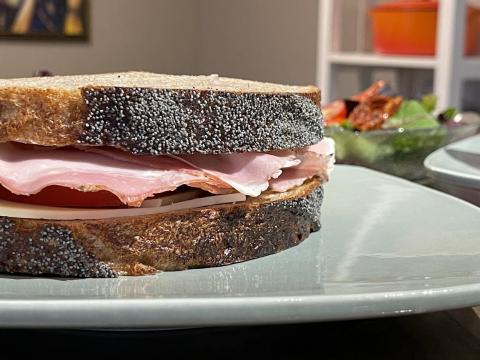 I‘m going out to the kitchen now to refresh my starter. I’m making this tomorrow!

That’s great Glenn, I hope you post how your rye turns!

This looks perfect for what this type of bread should be.

Thanks Ian, I haven’t had rye bread like this in many many years so wasn’t sure how it should turn out.  I’m glad it worked out and is a good tasty bread.  Not being fond of caraway seeds I prefer the poppyseeds on this.  Looking forward to your upcoming rye bake as well on the CB.

Oh my! :)  That is certainly not common on rye but I'm sure it tasted just fine!

You need to try some onions either inside or toasted dehydrated ones on top.  It's one of my favorite combos with rye.

I'm going to try and revise one of my favorites which I did in honor of Eric's passing.  This one had a combo Yeast Water and Rye starter but I'm going to combine them into one Rye starter I think and probably make a few other changes.

You can check out the original on my blog: https://mookielovesbread.wordpress.com/2012/12/10/onion-sourdough-yeast-water-onion-rye-ale-bread/

Ian your blog website is great.  Very nice photos and detailed write ups of your baking over many many years, very impressive.  Yes the sautéed onions are a good idea for this bread, I’ll need to try that, thanks for the suggestion.

I decided that bake this again, partially because it is a good bread but also because I wanted to see if pushing bulk further would reduce the splitting in the sides of the crust.  Someone posted that the splits occur if the dough is a bit underproofed.  So for this bake I pushed bulk much further maybe about 50% further, although it is hard to say because the dough temperature was low due to the proofing box being full with another dough.

The proof was definitely pushed because you can see the oven spring wasn’t as great as the first time and the bread spread somewhat in the dutch oven.  The sides didn’t split though so I do think that you can minimize that splitting by pushing bulk, but I do think I pushed it a bit too far.

I may not be able to post a crumb photo because this loaf will be gifted. 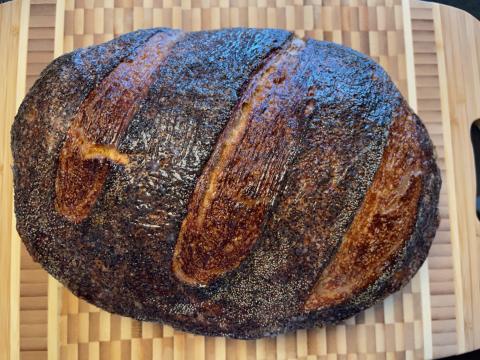 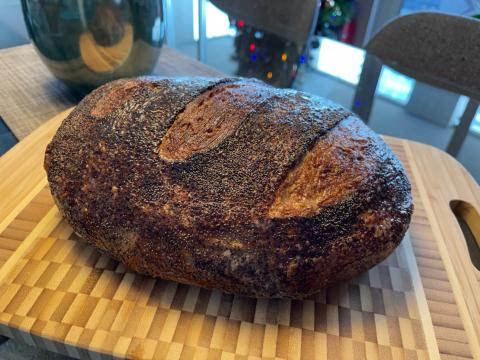 The slashes have definitely bloomed and the overall shape suggests that there was adequate, if not massive, oven spring.  I expect the recipients will be quite happy with the loaf.

Thank you Paul, yes I’m pretty sure that my friend will enjoy this bread despite the fact that it didn’t get massive over spring that I was spoiled with on the first bake.  Usually my second bakes are better than my first rather than the other way around, but again, I deviated from the recipe with bulk times.

No exactly , I forgot to hold out the salt at the end but I got good oven spring. I added some onion flakes, fennel seed and caraway l will leave it a day before cutting it but looks good so far. I had a bakeware pan to cover it but I ended up just steaming the oven because it looked like the pan was too small 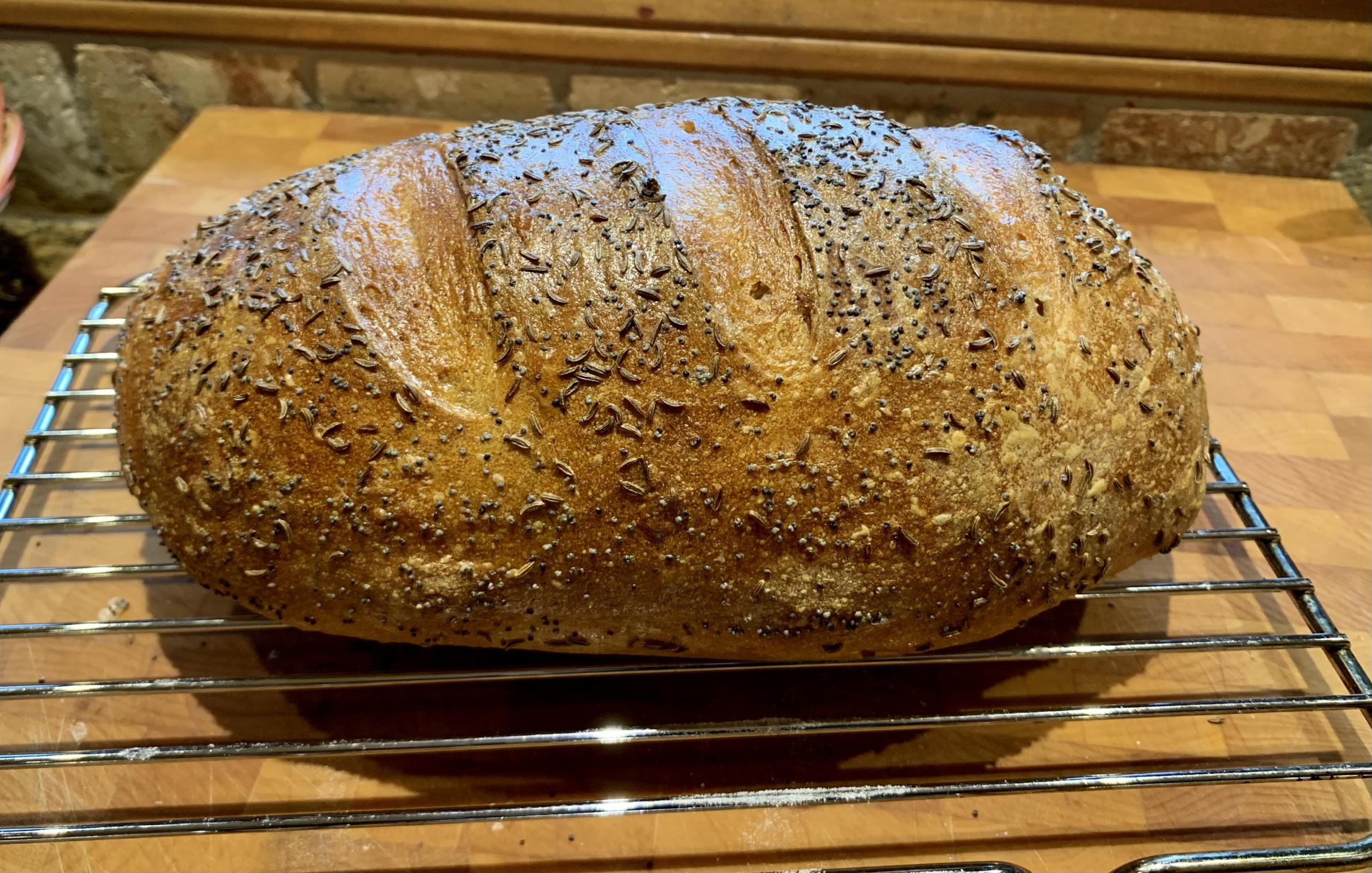 That looks really great Glenn, I hope you're happy with it when you finally get to try some.  I'll look forward to your crumb photos too.

it's a great formula. I used all purpose flour bc it's what I had -- and dropped the initial temp to 460 and upped the final temp to 380. I used caraway bc I'm a sucker for the ryes of my childhood. I'm hoping to try it with sandwiches tomorrow. Your bakes are inspirational. 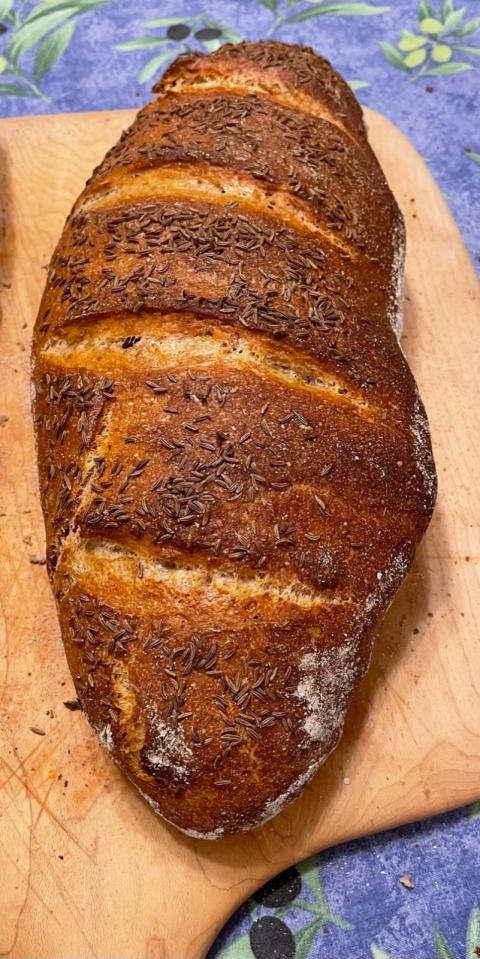 Rob your loaf looks amazing, lovely colour on the crust and the caraway seeds look good on it as well.  I hope you enjoyed the flavour and that you’re happy with the crumb.

Tho the dough appears slightly marbled -- I probably could have mixed and shaped with more attention to detail -- the proof is in the eating, and the crumb, crust and flavor are fabulous. 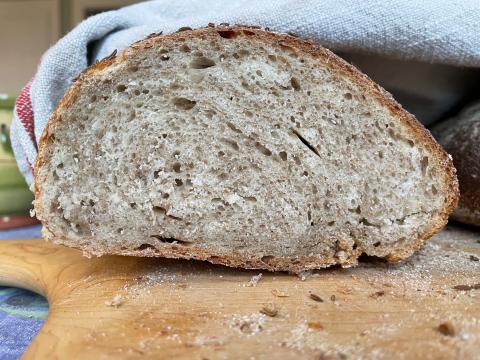 I like that marbled rye look.  The flavour and texture and most important so it sounds like you achieved that goal for sure.