why does my crusty turn rubbery?!?!

why does my crusty turn rubbery?!?!

Hey there folks! I need some help. I've been making this beautiful bread, the taste is delicious, not gummy, has a nice open crumb. But a day after baking, the crust turns into this rubbery chewy crust that kind of ruins the whole eating fresh bread thing.

The only modification I make is temperature:

I cook in a Dutch oven on top of a baking sheet so the bottom doesn't burn too much (it still does, but no other temp combinations I've tried cooks out most of the water leaving a gummy crumb).

Any help is appreciated!! I'm trying this again tomorrow afternoon. 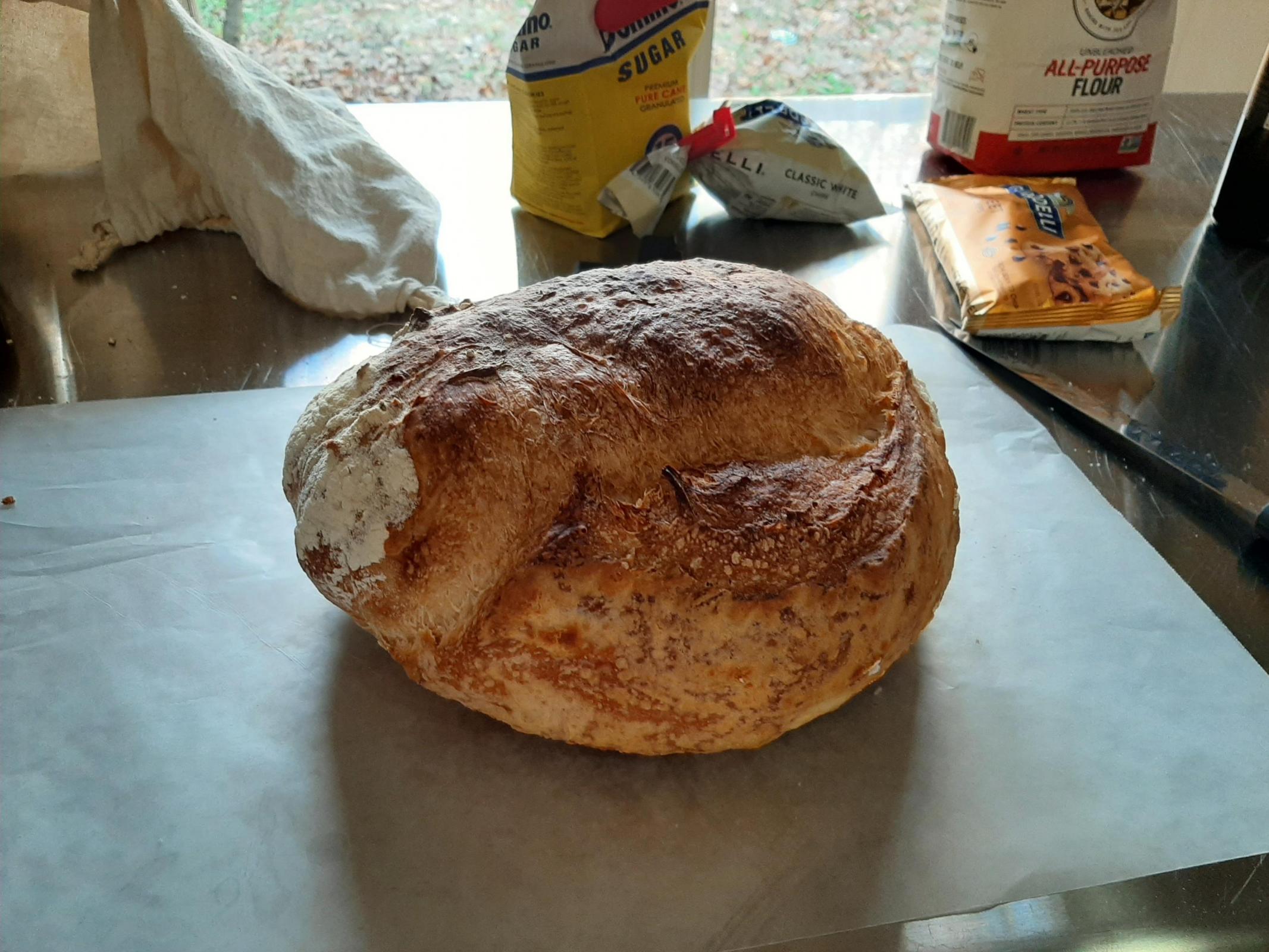 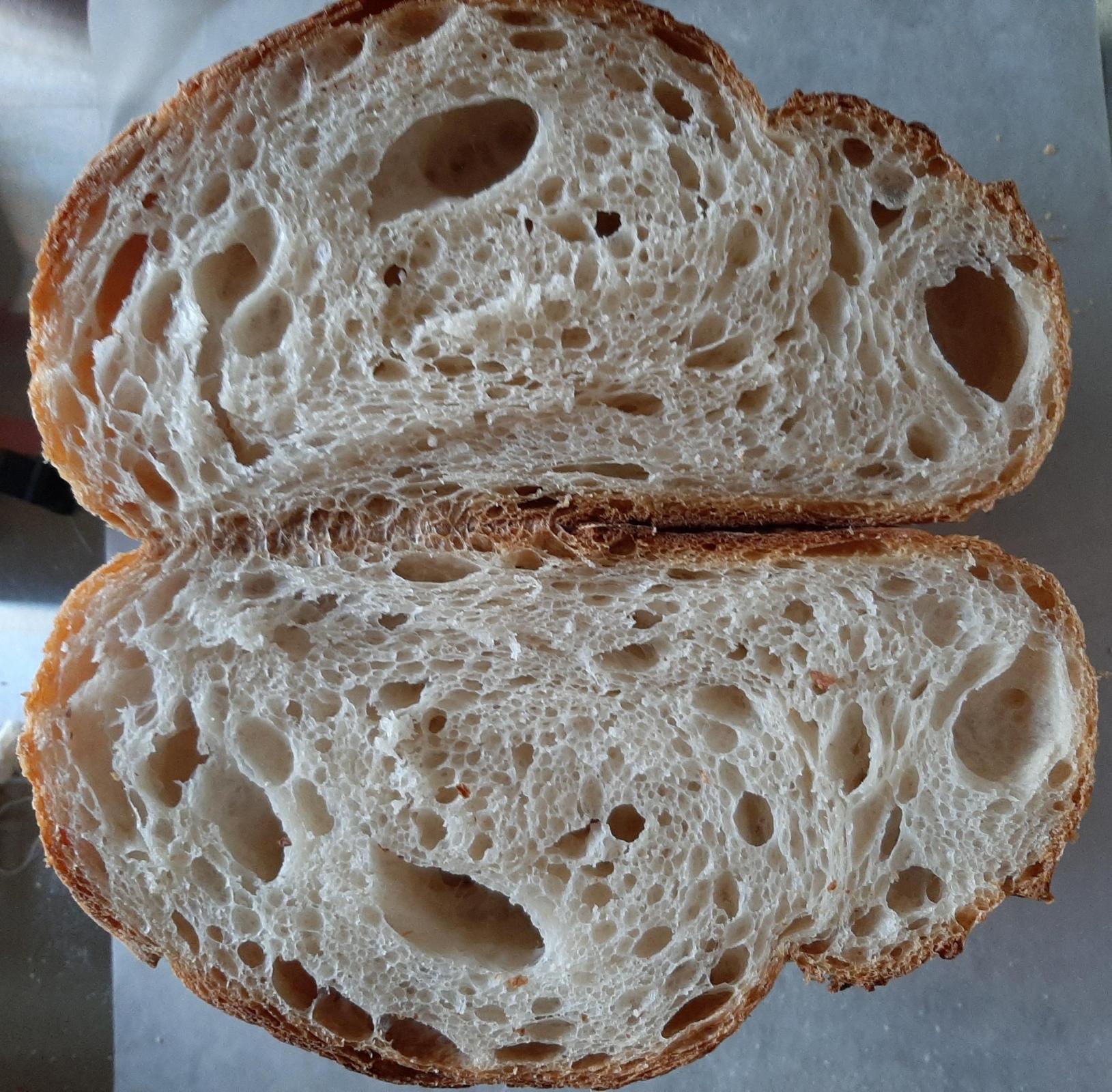 Bread is best when cooled to room temperature, and eaten.  I bake 900g flour weight loaves, let cool, cut into quarters, freeze three quarters and store one quarter in a ziplock.  I cut slices off the quarter for breakfast and lunch.

This method gives me a continuous supply of good quality bread, without baking every day.  But not as good as freshly baked and cooled bread.

How are you storing your bread?

The message is that peak bread quality is a short lived idea.

I always cool to room temperature before cutting. I store the bread with the cut sides face down on wax paper with the wax paper somewhat covering the rest of the bread,  and in a linen bag. It's just disheartening it happens the vey next day.

Starter must still be working good.

Moisture gravitates towards dry. Crispy = Dry, guess where the moisture goes, and there's always moisture in bread. You can't bake it all out - if ya did you'd basically make bricks, similar to adobe. It's a pain, but you can always throw it in the oven around 300F for a few minutes to crisp it back up. Of course by removing more water you get a very dry bread after a few times re baking, so eat a lot, and fast.

The paper bag is good at keeping a dry, ie. crisp crust, but it'll also give a dry bread before to long. Then were back to eat fast and eat a lot (or share with the birds, they always loved my breads). Enjoy!

Thanks,  phaz! Starter is going great :-) maybe I'll experiment with some more temperatures, and the covered vs uncovered time. I could manage with a thinner rubbery crusty, if rubbery crust is just unavoidable after a certain time.

What you can try, tho i didn't for the sourdough i cook home, cause we eat it all the same day, is to put your bread in the freezer, that's what we do when we buy bread from the store, we freeze the bread we don't eat, this way its stay as good as fresh, we've been doing that all my life.

Now the day you decide you want to eat the frozen bread, you take it out put it in the microwave for 30sec at max (depend on the size of your bread and power of your microwave), than you put it in the oven, the crust will get its original crispy texture, it gets as good as new, but you can't refreeze it after that, and you can't leave it all day outside, you have to eat it in a couple of hours.

By the way you don't have to use the microwave if you have time or don't have one, you can leave the bread at room temp to defrost and then put it in the oven.

Again you have to try it for home backed sourdough, i didn't yet.

I hadn't thought of that! It might be worth a try. Thanks!

You could make smaller loaves and make them more frequently.  We freeze our leftovers as well but it’s never as good as fresh

I'll probably do this.  I always end up chucking some of the bread unless I'm being a glutton that week. Smaller loaves are easier to cook, too!

Something I didn't think of let time I was here was - as you're doing the Dutch oven thing - to not cover tightly. In other words, leave a little room to allow steam to escape.

Too much moisture on the crust while baking will give a thicker crust, and when that softens up, it'll get rubbery - more moisture = thicker, and thicker = more rubbery.. Letting a little out may help a bit.

Another thing you can try is - the lightest coating of oil. That'll keep moisture from soaking into the crust while baking giving a thinner, thereby crisper crust. The best crisp is a fry crisp - so let it fry a little. You might find more blisters too. Enjoy!

my challenge with this - this recipe is high hydration, so I have to use a whole bunch of flour on my banneton to prevent it from sticking. so when I take the dough out of the banneton, I have a hard time brushing a lot of the flour off until after it bakes. 1) is there an easier way to do this, or 2) can I just put the oil on top of the flour?

texasbakerdad
Dec 2 2020 - 7:19am
Since no one has suggested it, you might try a different recipe

Your loaf looks very nice. You probably baked it about as well as you can for that particular recipe.

I have found quite a bit of difference between how well bread tastes as it gets older depending on the type of bread. Unfortunately, I never recorded which breads held up better over time, so I cannot accurately suggest a bread type that would work better.

Maybe someone else can chime in with a specific recipe that is known to have a long shelf life.

I seem to remember Tzangzhong recipes are known to have a longer shelf life. I also think recipes with oil in them might hold up better over time. I think refined flours tend to dry out more quickly, but I haven't scientifically tested that.

But, back to your original concern, the crust. I think you are going to have to find the best compromise... use one of the ideas other people have already mentioned (freezing the dough, rebaking it, etc.) or settle for a recipe that produces a crust that maybe still loses its crispiness but at least doesn't turn to rubber on day 2.

Also, experiment with plastic bags versus paper bags. They achieve different results, one isn't better than the other. Paper I think keeps the bread as close to its original state for a bit longer but in the end the crumb dries out faster. Plastic keeps the bread moist longer but softens the crust, which is good/bad depending on the goal you are trying to achieve.

thanks for the input! I do have one other recipe I really enjoy (much lower hydration), but it's an entirely different taste (and that one I do add a little bit of oil to). I'll have to go back to experimenting with some new recipes to find if I can find something that works better (or if someone has any they can suggest).

I'll look into Tzangzhong recipes! See what I can make :-)

I'll also look into plastic vs paper and see if that helps make the bread(s) more enjoyable longer, thanks!

Just saw your previous post , high hydration, lot of flour on the dough - that's a great recipe for a thick rubbery crust.

Definitely go lower with the water. And removing that coating of flour will make a huge difference - which can be done with a very soft brush - like natural bristle paint brush. That'll get rid of dry flour, but if it's caking on, you'll have to go with less water (hydration) to be able to use less releasing agent (flour).

And definitely keep the lid open a crack - to much steam is as bad as to little. Enjoy!

I forgot to mention - didn't think of it till I started making a loaf a few minutes ago. Add some oil to the dough. That'll help maintain a soft moist crumb (even with lower hydration), which will give you more time in a drier environment to keep a the crust crunchy before everything gets crunchy. Enjoy!