The following are a compilation of my bakes for the Rye Bread Community Bake.

I went with Eric Hanner's formula, with a few adjustments. The hydrations was lowered to 70% and the mixing and kneading was altered in an attempt to preserve the gluten from the white flour. The spreadsheet is posted to the BLOG. I am keen to the fact that rye is gluten deficient and requires special care. Another tidbit - the acids produced by the sourdough culture is extremely beneficial when a dough has a fair amount of rye.

Taste -
In all honesty, the flavor was lack luster. The bread turned out fine but the complexity and strong flavor that rye brings to the table was not there, IMO. Next bake will use 35% Whole Rye

The dough produced a huge amount of gas and it seems it was over proofed. 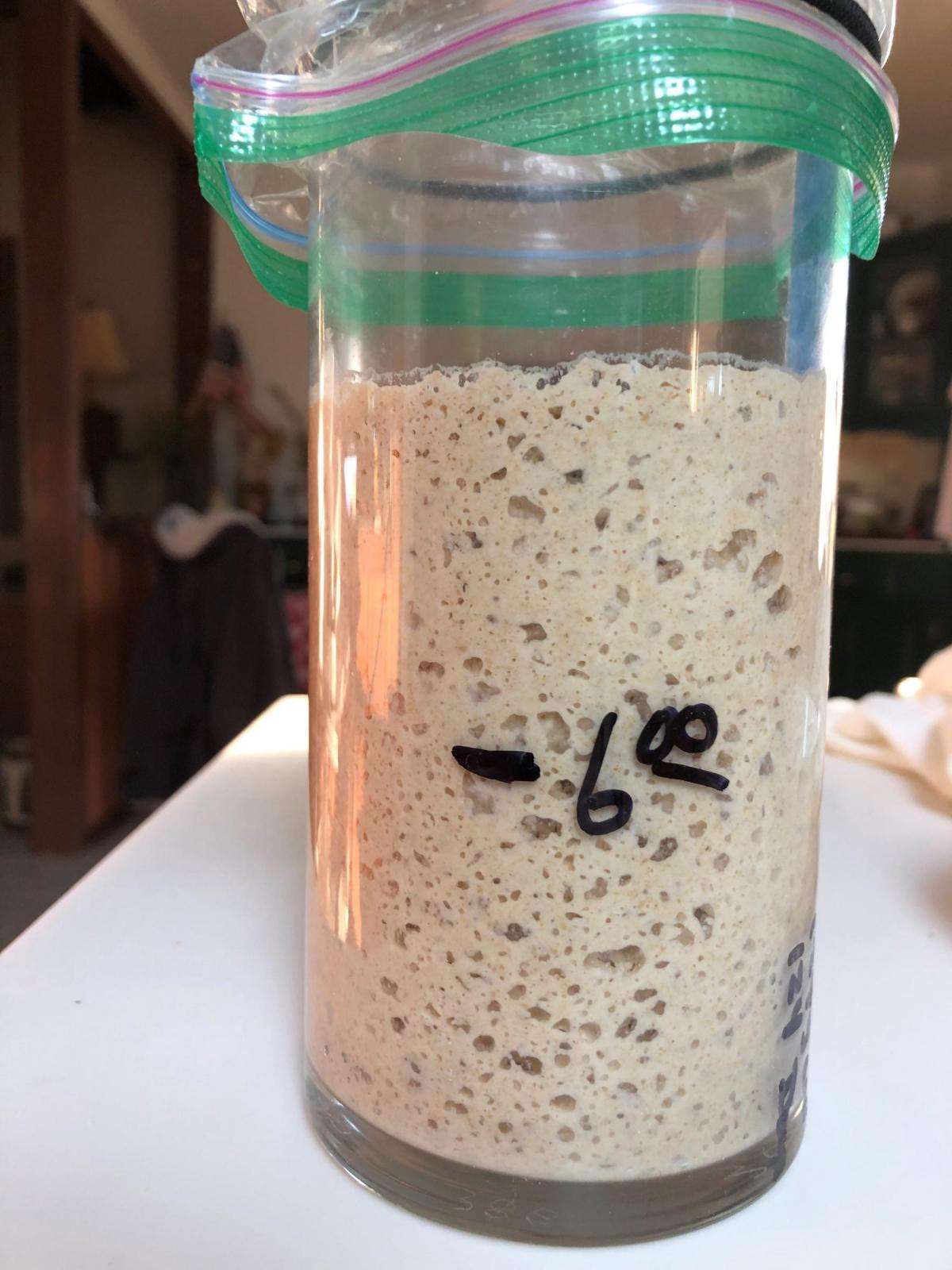 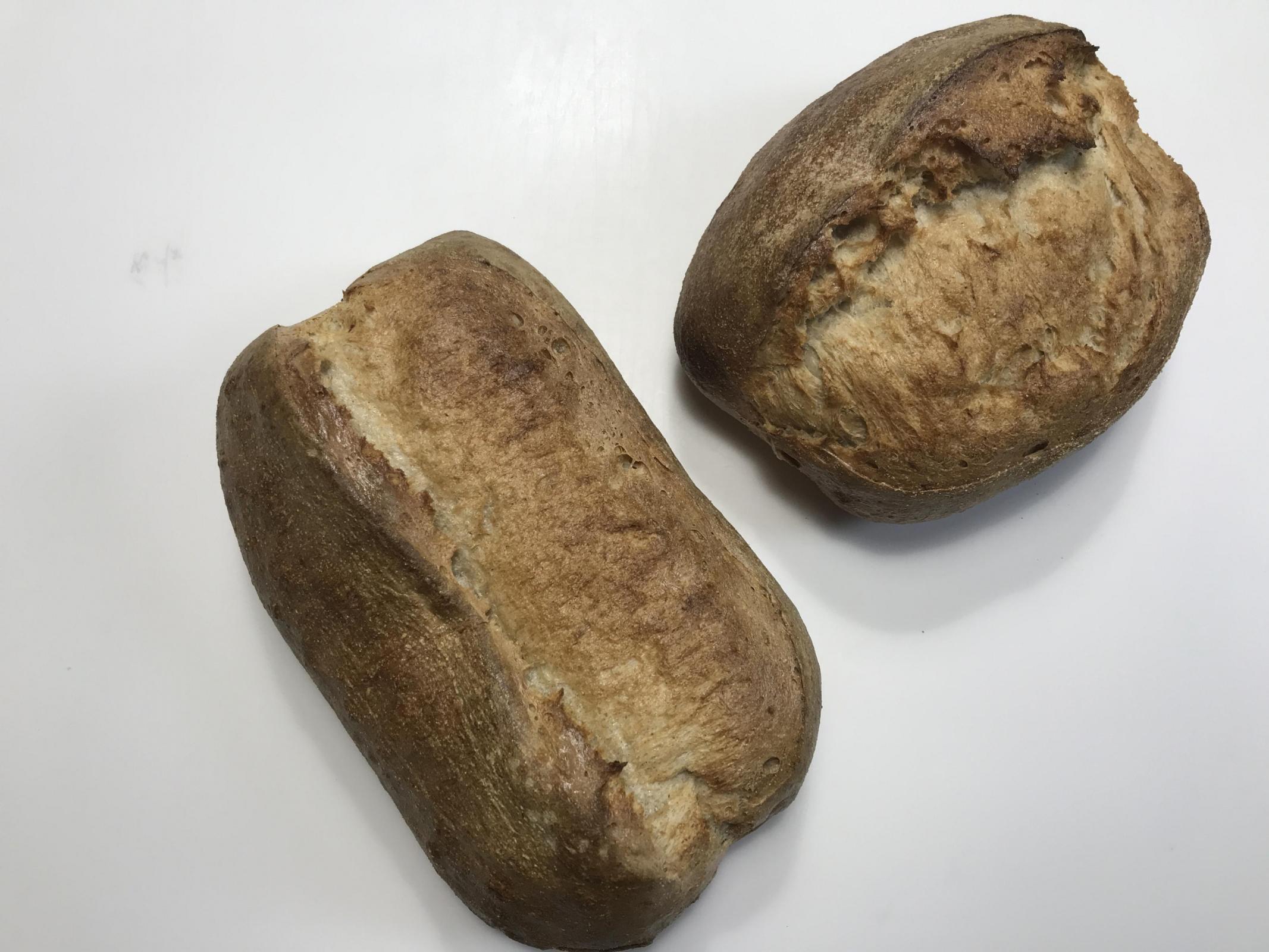 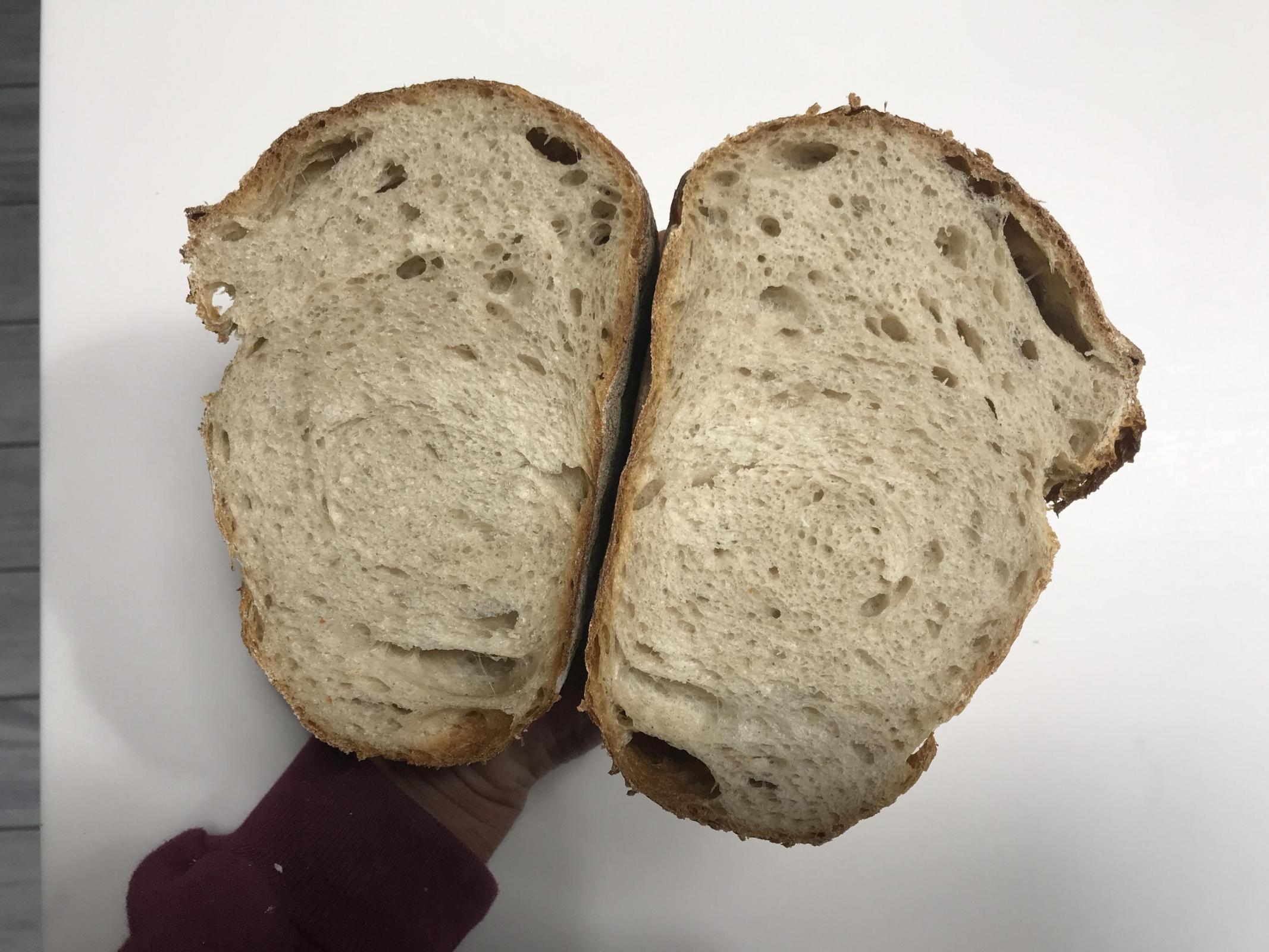 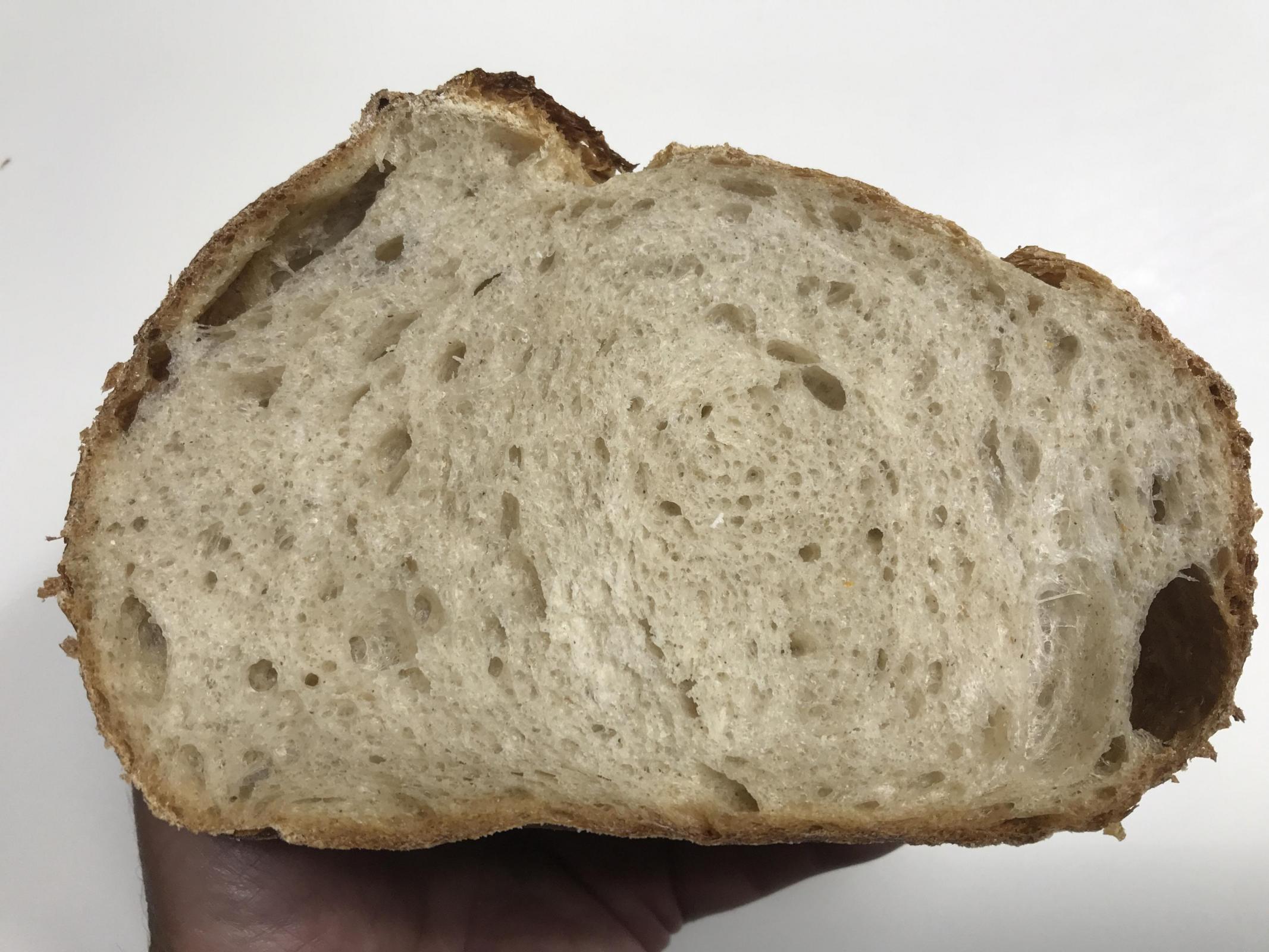 A word of caution -
My second bake just came out of the oven and it was more dark than I would like. The first bake used Caputo Manitoba (un-malted) and this latest bake used King Arthur bread flour, which is malted. Since the formula calls for 1.1% sugar, be careful when baking with a malted flour. You may want to reduce the oven temperature to be safe, or watch it closely.

BTW - the bread flour had plenty enough gluten to give strength to the rye dough. It is possible that developing the white flour first is a game changer for rye doughs. 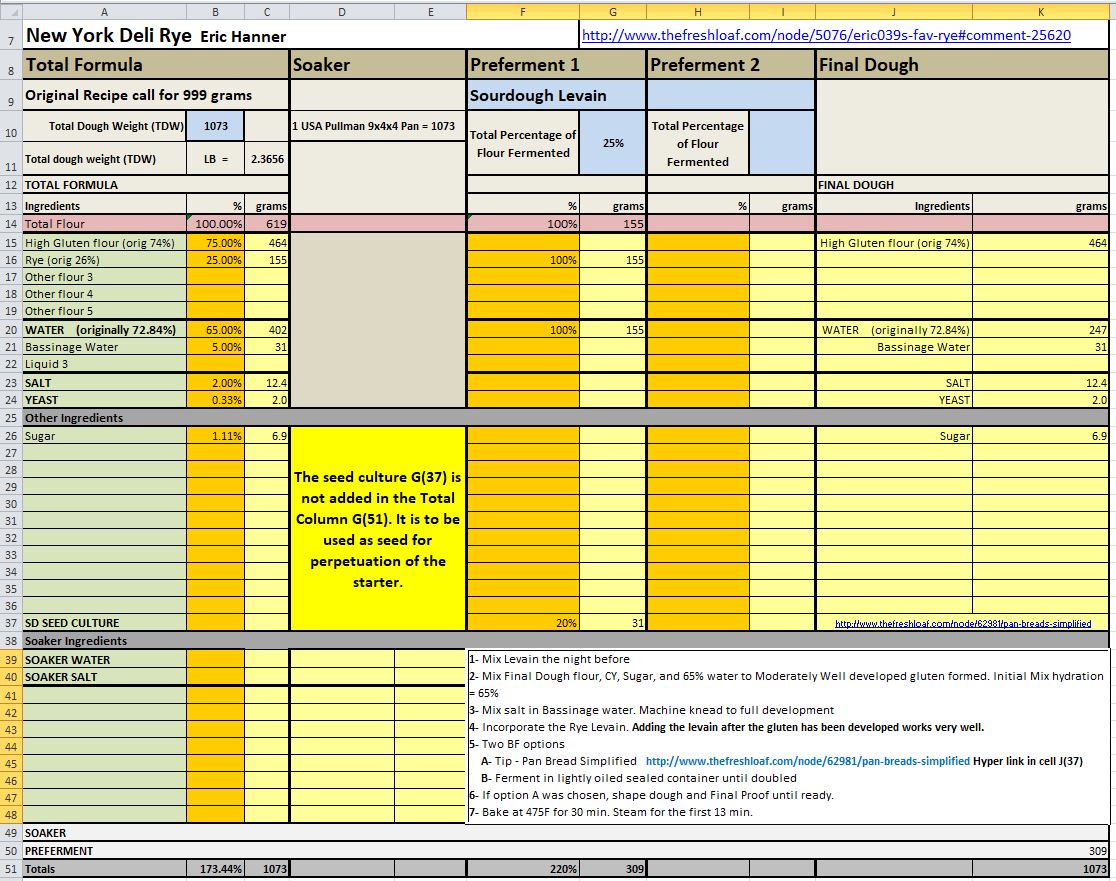 Bake #2
In an attempt to increase the flavor Eric’s formula was tweaked to 35% home milled whole rye (large bran omitted). For both bakes the hydration was lowered to 70%, but for the increased rye, more water would have been nicer. 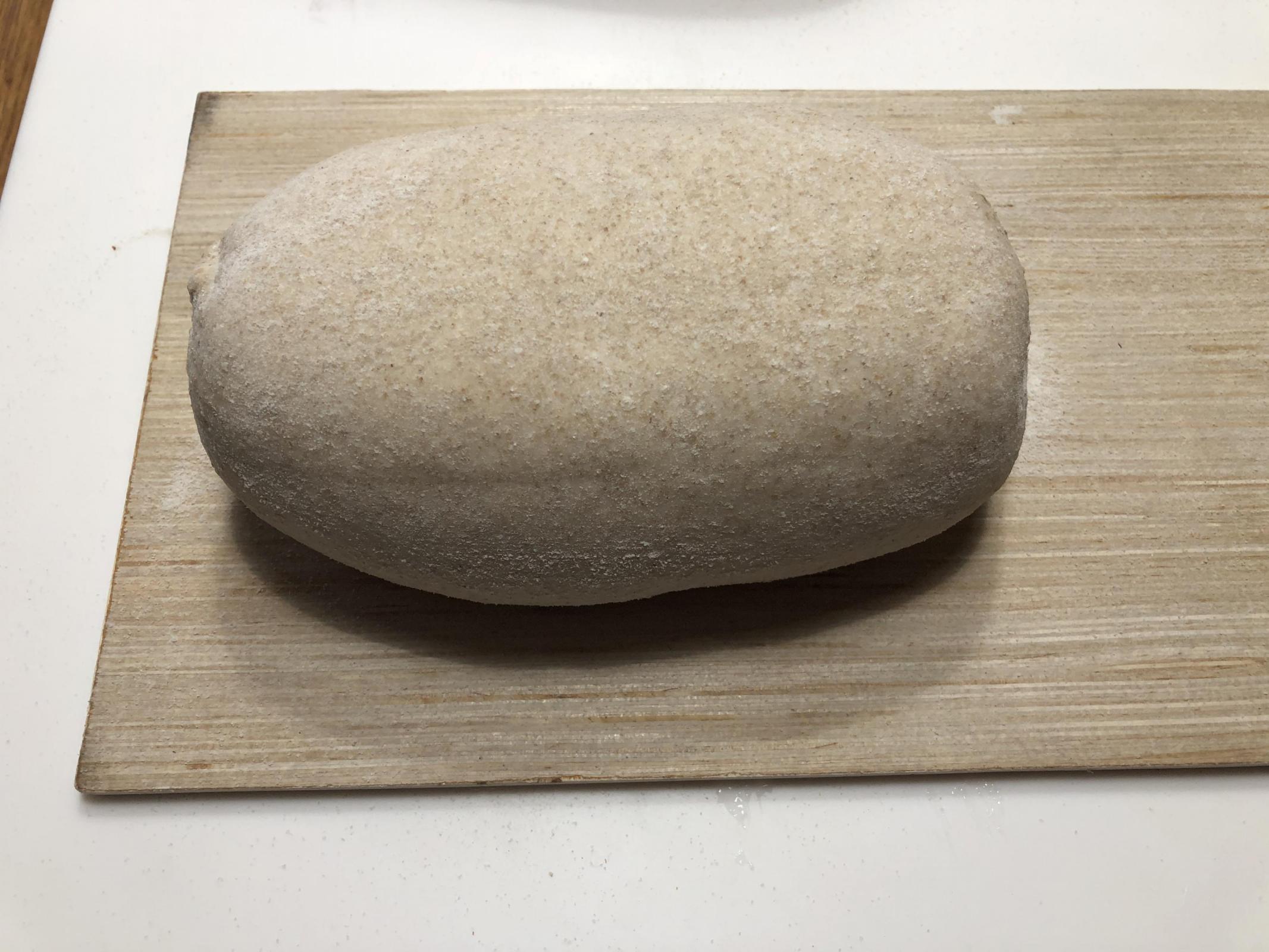 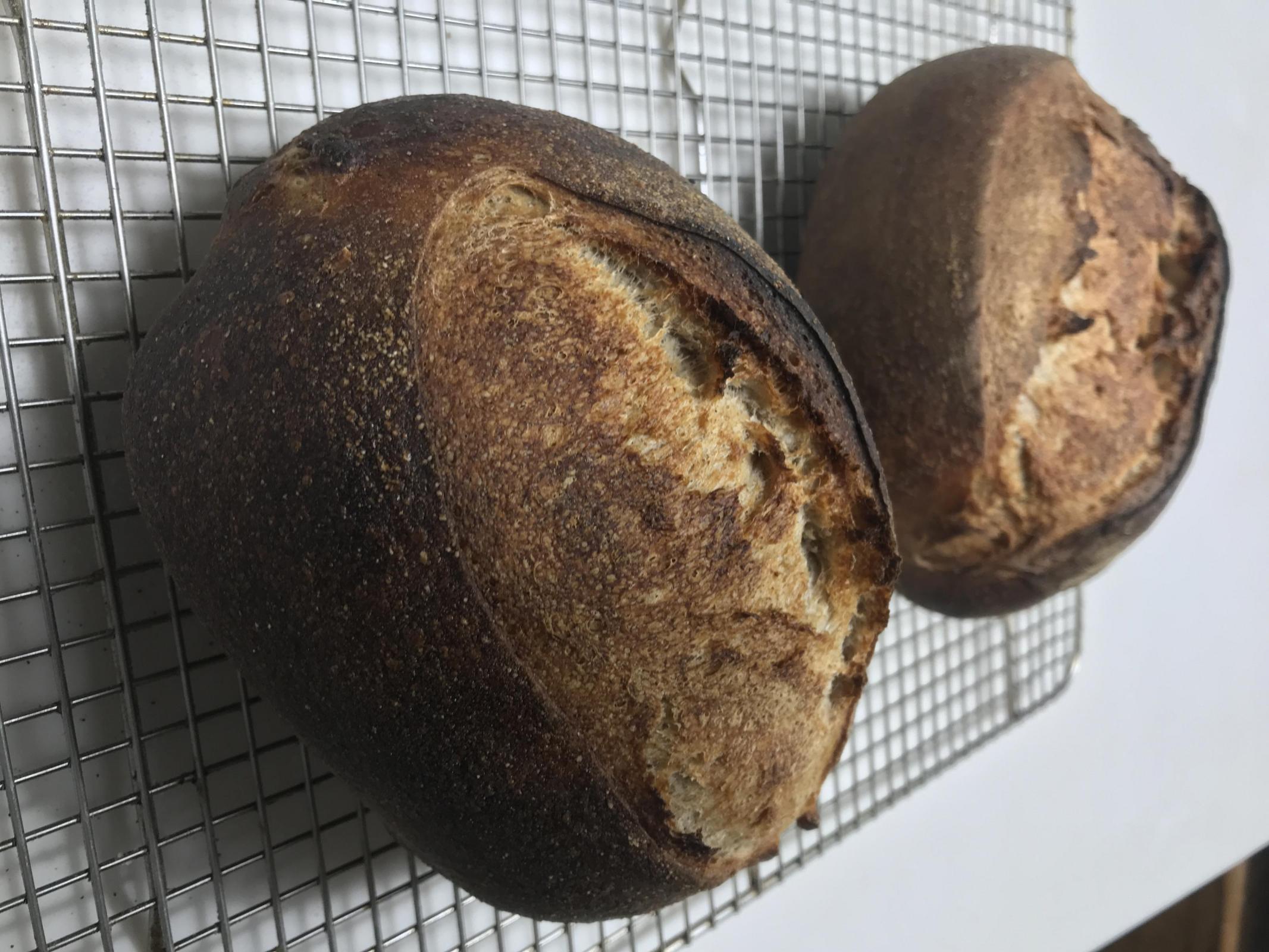 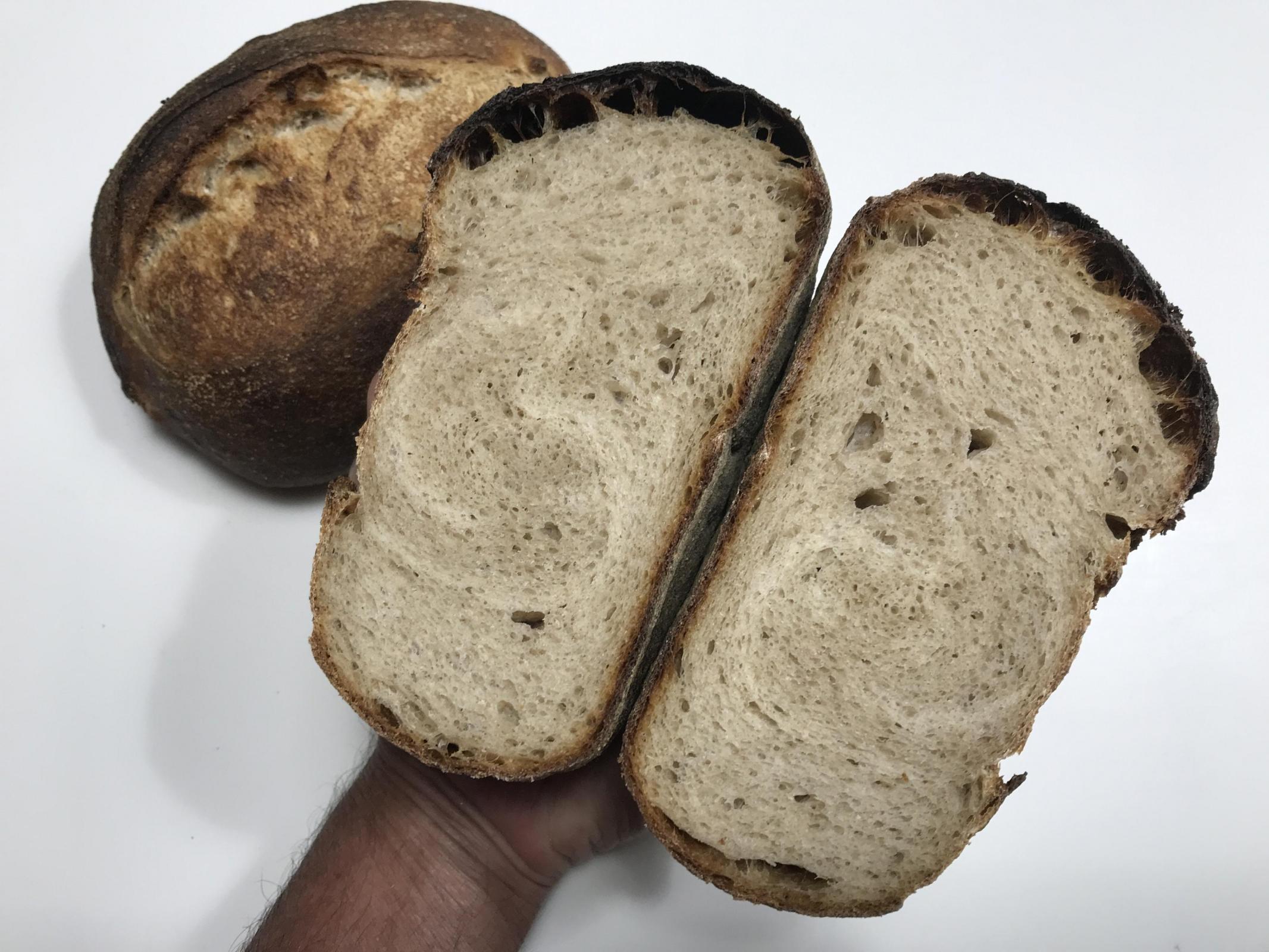 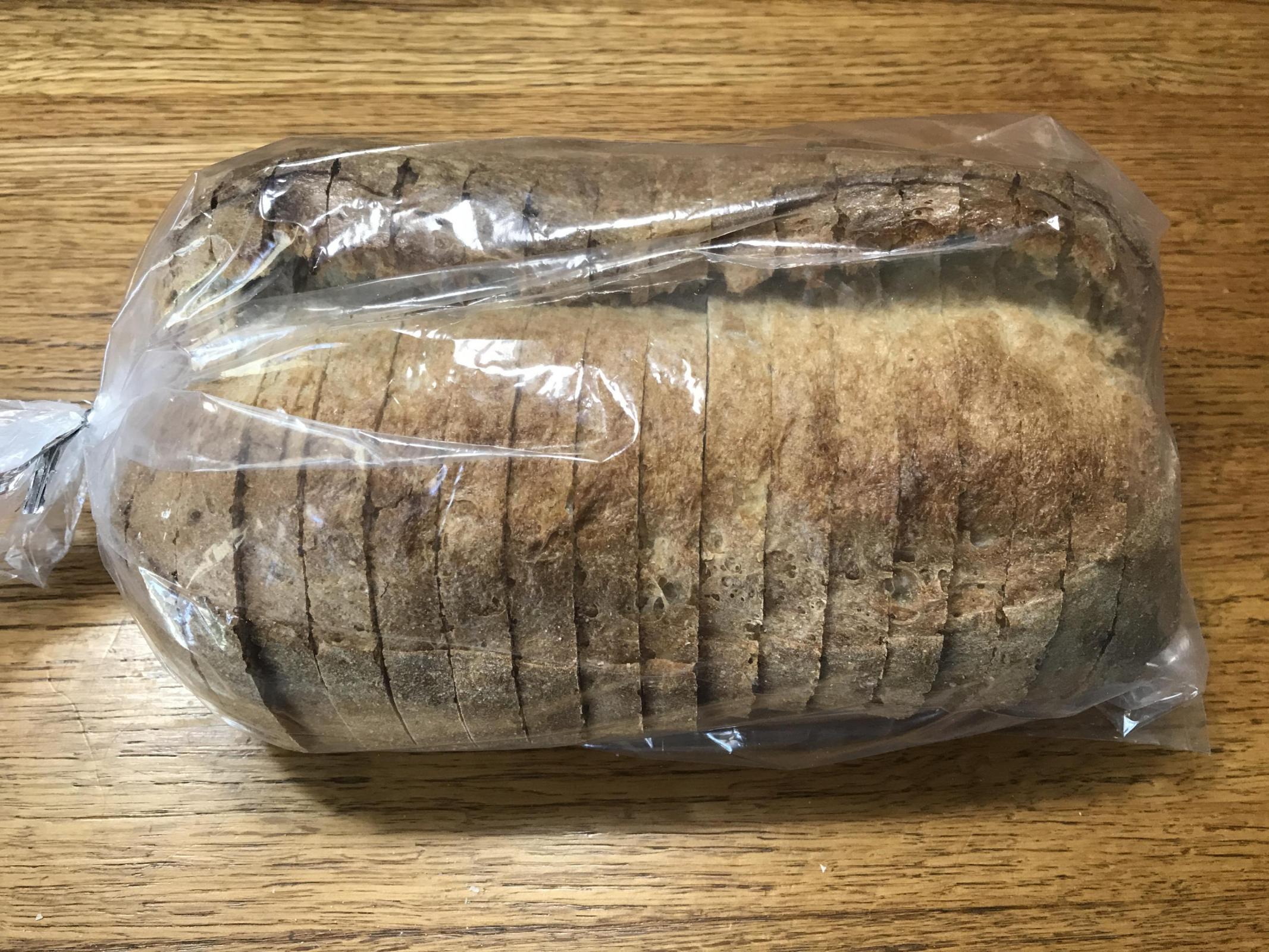 In an attempt to ramp up the flavor, this bake was Hamelman’s 40% Rye. Used 1% dill and sprinkled crust with kosher salt. NOTE - need to learn how to properly apply salt to crust. Glazed crust with corn starch/water mixed, then sprinkled salt. But the salt sort of “melted” in many places.

This bread was moist, unlike the other two. Both the crust and crumb was softer also. Looks like AG was correct. The rye flavor kicks in at 40% rye.

A light bulb moment -
All 3 of the first bakes used Caputo’s Americana for the white flour and home milled rye (dark rye). With the exception of Bake #3 (spiked with Chocolate Barley) the bread lacked that typical dark rye color. I think that the addition of 0.5 to 1% Diastatic Malt would have benefited the bread. Most american flours are malted. 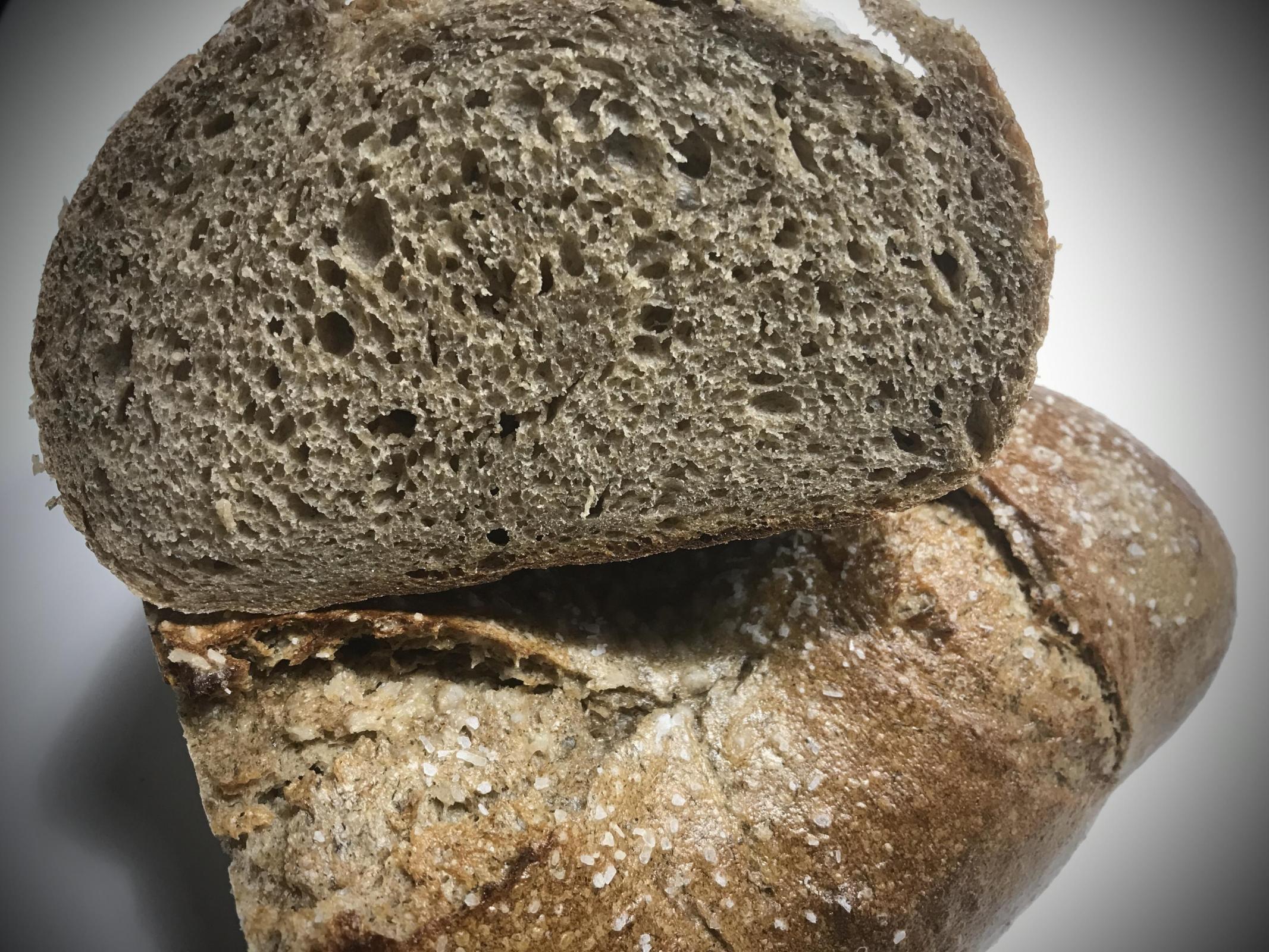 The flavor review -
Since Caraway is too pungent for my liking, 1% dill was added to the dough. It gave the bread a nice nuance, but wasn’t overwhelming. Also 1% Malted (N/D) Chocolate Barley was also added to the dough. It produced a darker crust and crumb, but more importantly, the chocolate flavor was a welcomed addition.

Both the crust and crumb was softer, which I liked. And the crumb was moist. Other than the possibly of over baking the first two, I can find no other explanation.

It seems that 40% whole rye is the threshold for those seeking the characteristic flavor that rye lovers crave. Comparing Bake #2 (35% rye) with Bake #3 (40% rye), the increase of 5% rye made a 100% difference. Possibly a slight exaggeration, but it sounded too good to resist :-)

Had to jump on the band wagon with Texas Dad. The corned brisket is slow cooking as this is written. Reubens for lunch. 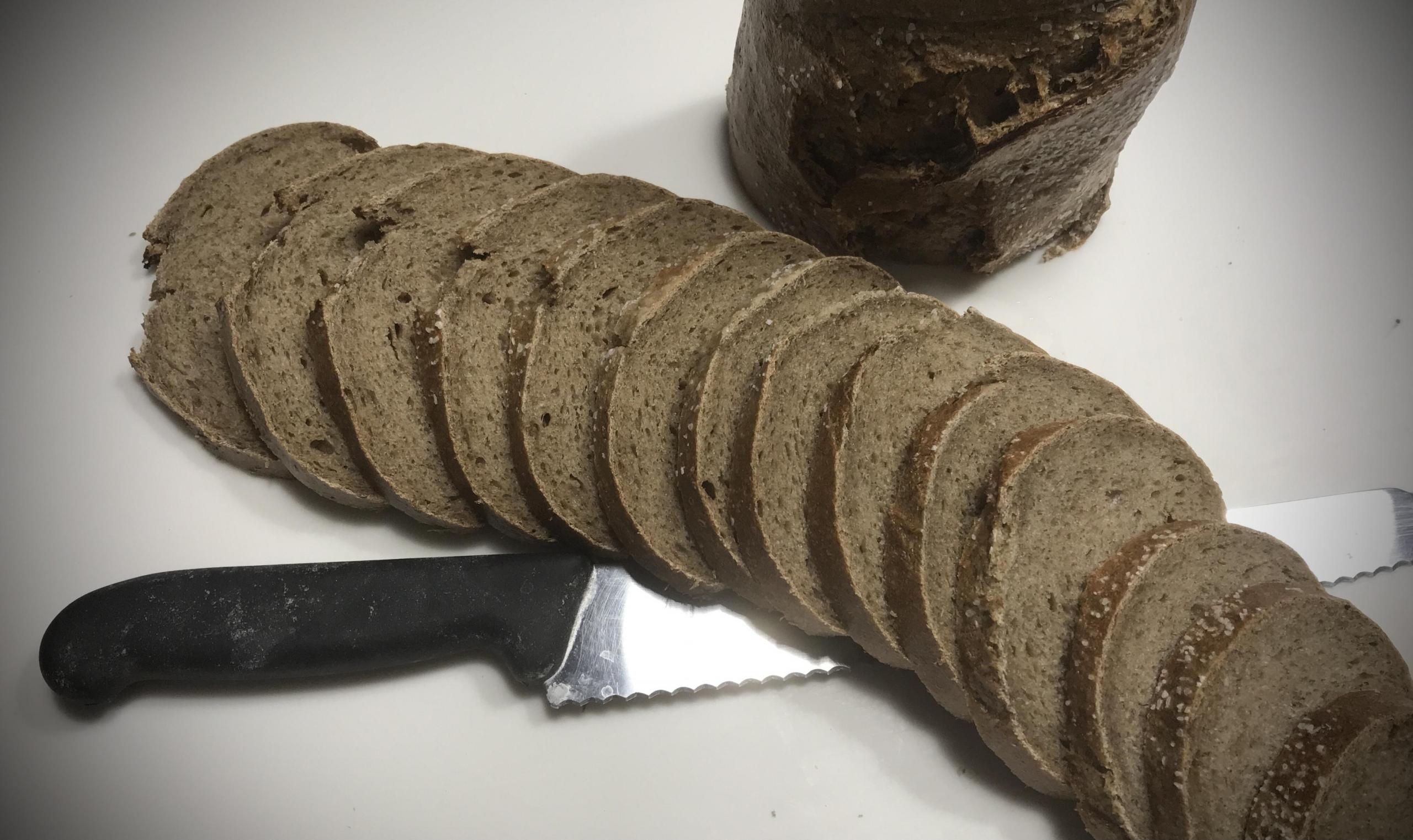 A repeat of Bake #3, Hamelman’s 40% Rye. The hydrations was upped to 70%, but 68% may be my sweet spot. Added 0.4% diastatic malt and increased the Chocolate Malt (N/D) from 1% to 2%. It darkened the loaf and crumb more, but the jury is still out on this change. At this time the flavor seems a liitle nicer on the previous bake, but I think that will change as the loaf ages in the next day or two. NOTE - the salt on the crust is a real treat and adds a blast of flavor. It doesn’t take much coarse kosher salt to do the trick. 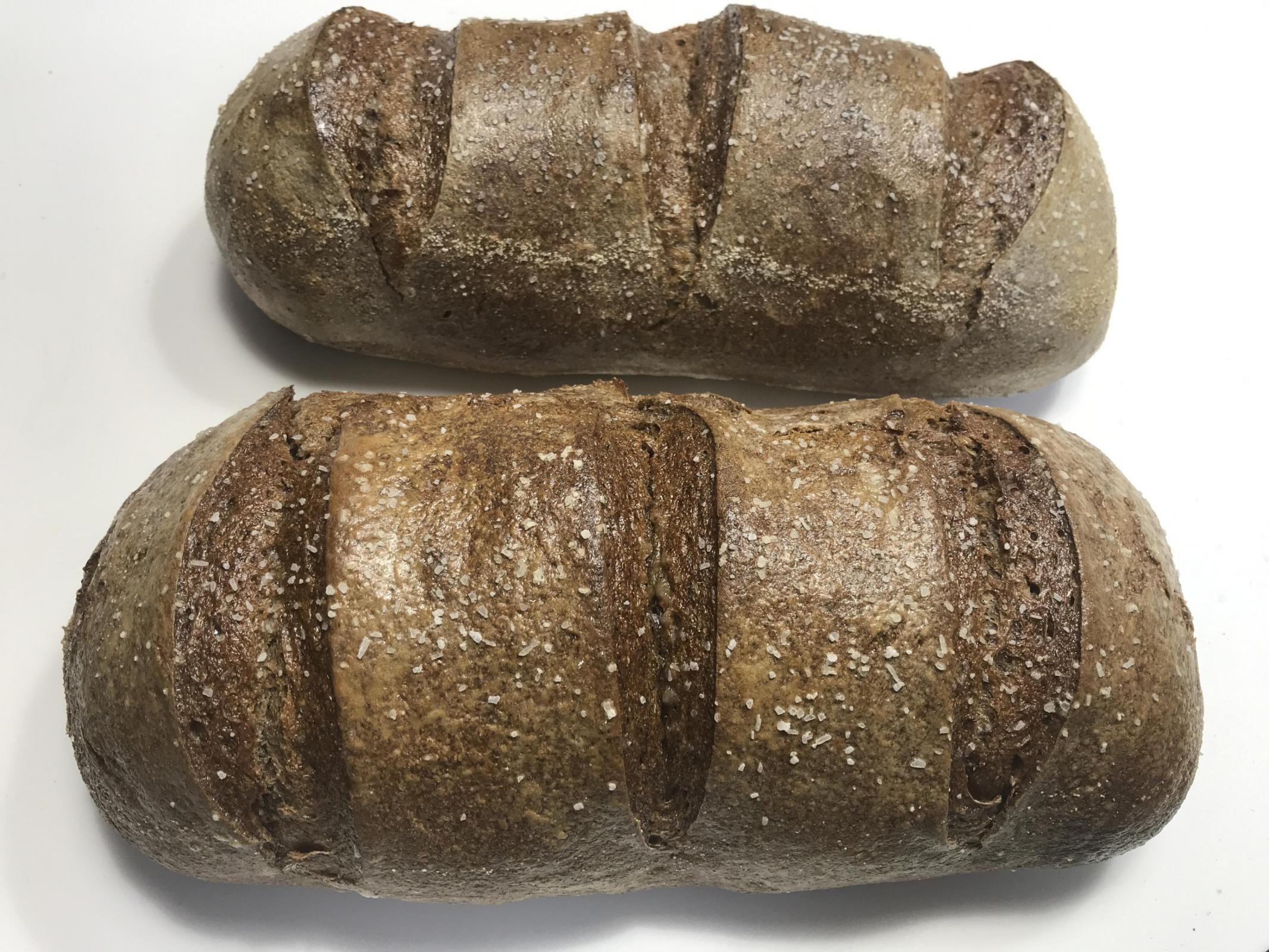 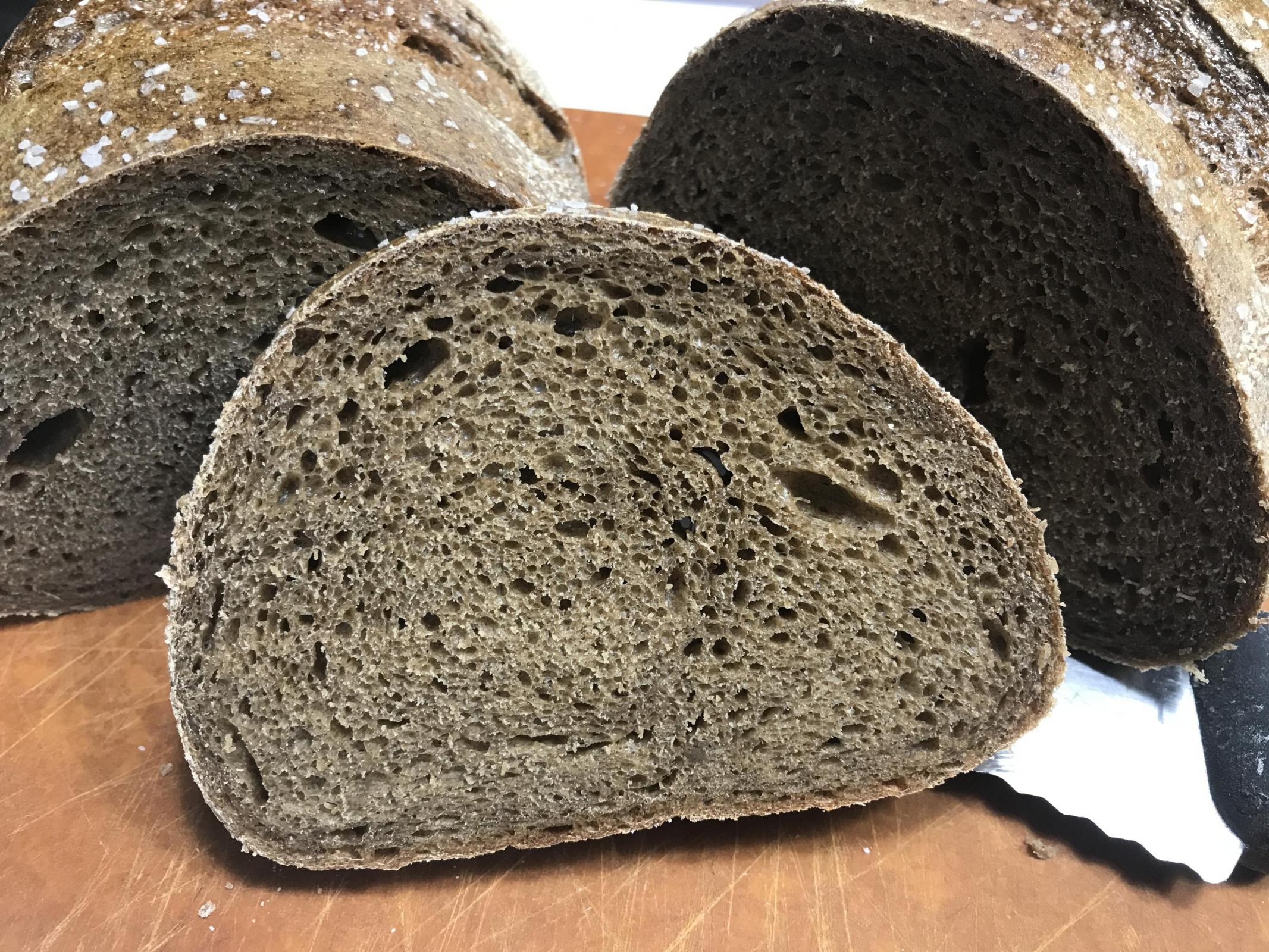 When it comes to Rye Bread, Hamelman’s 40% Rye is my go-to Rye Formula. At 40% rye, especially at 100% extraction, the rye flavor is pushed to my flavor limit. The flavor difference between whole rye and rye that has been sifted to remove the bran and other large particles is huge! Since baking this formula, the breads have been moist and nice tasting.

The 1% diastatic malt was dropped and the Chocolate Malt (N/D) was scaled back to 1%. Those changes worked well and will be repeated in the future. The concept of fully developing the white flour before adding the rye levain has consistently worked well for me.

I really like Doc’s idea of sprinkling kosher salt on the crust (taste great), but I have noticed that it tends to melt, leaving small dark spots on the crust. 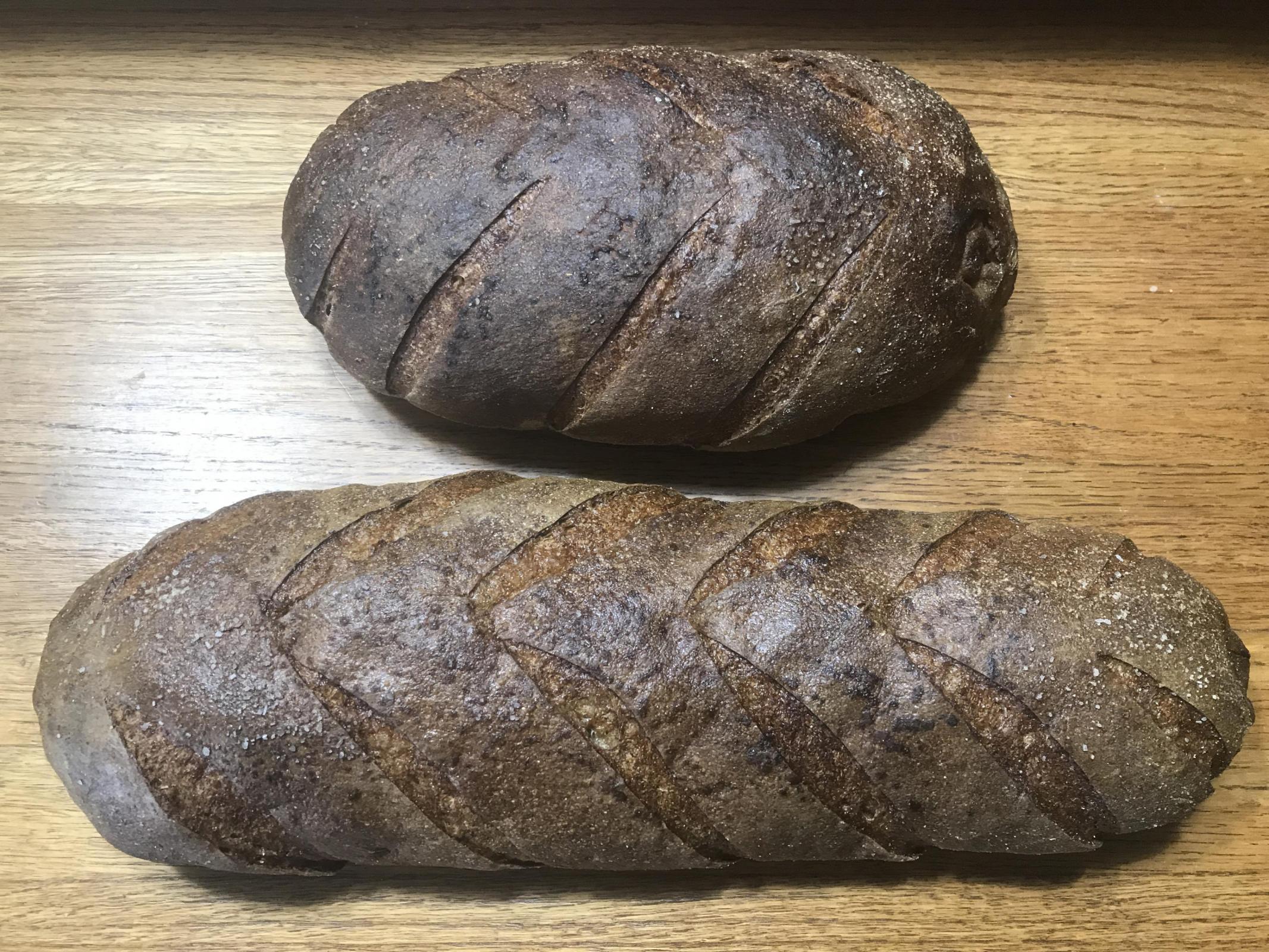 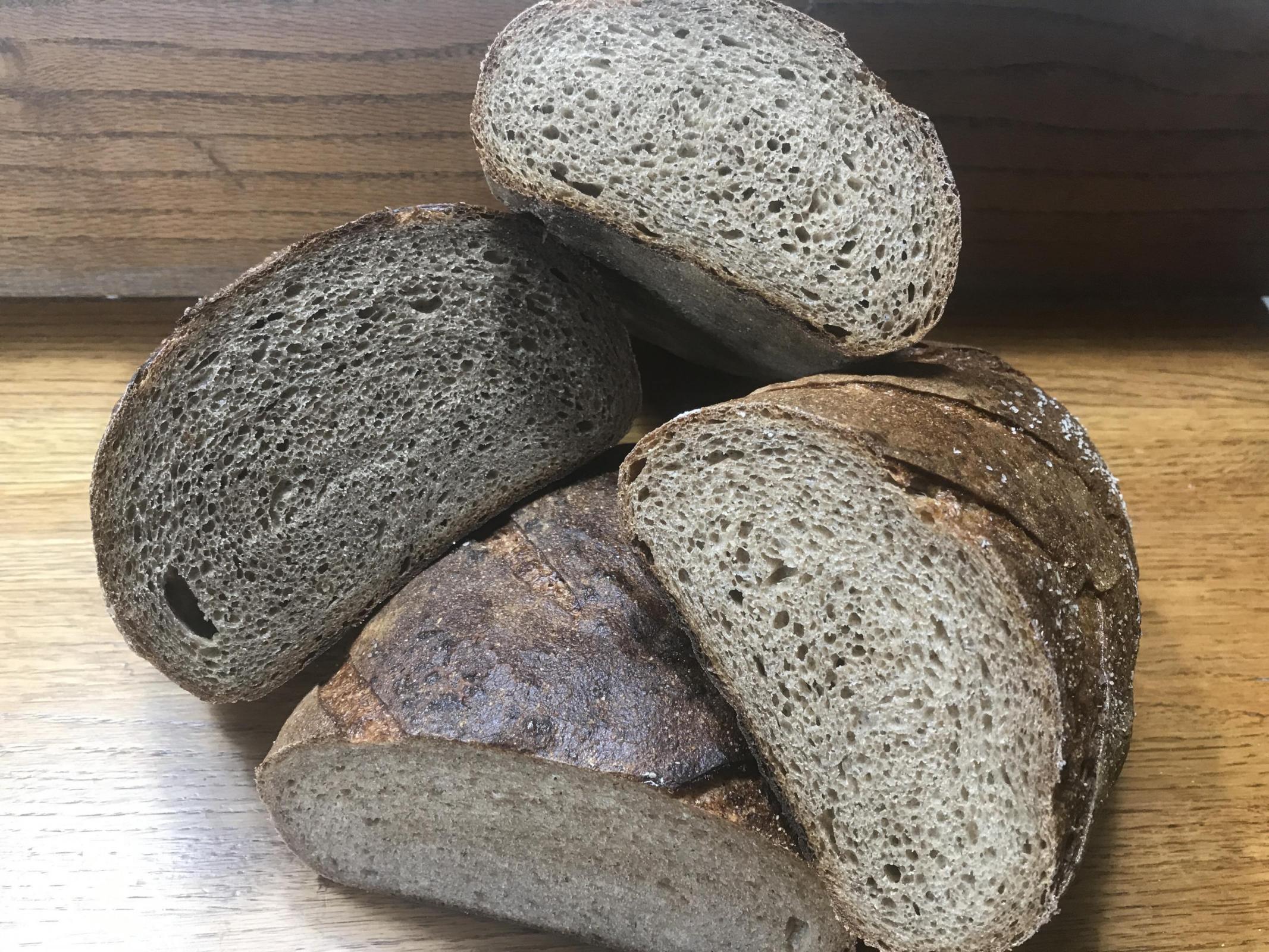 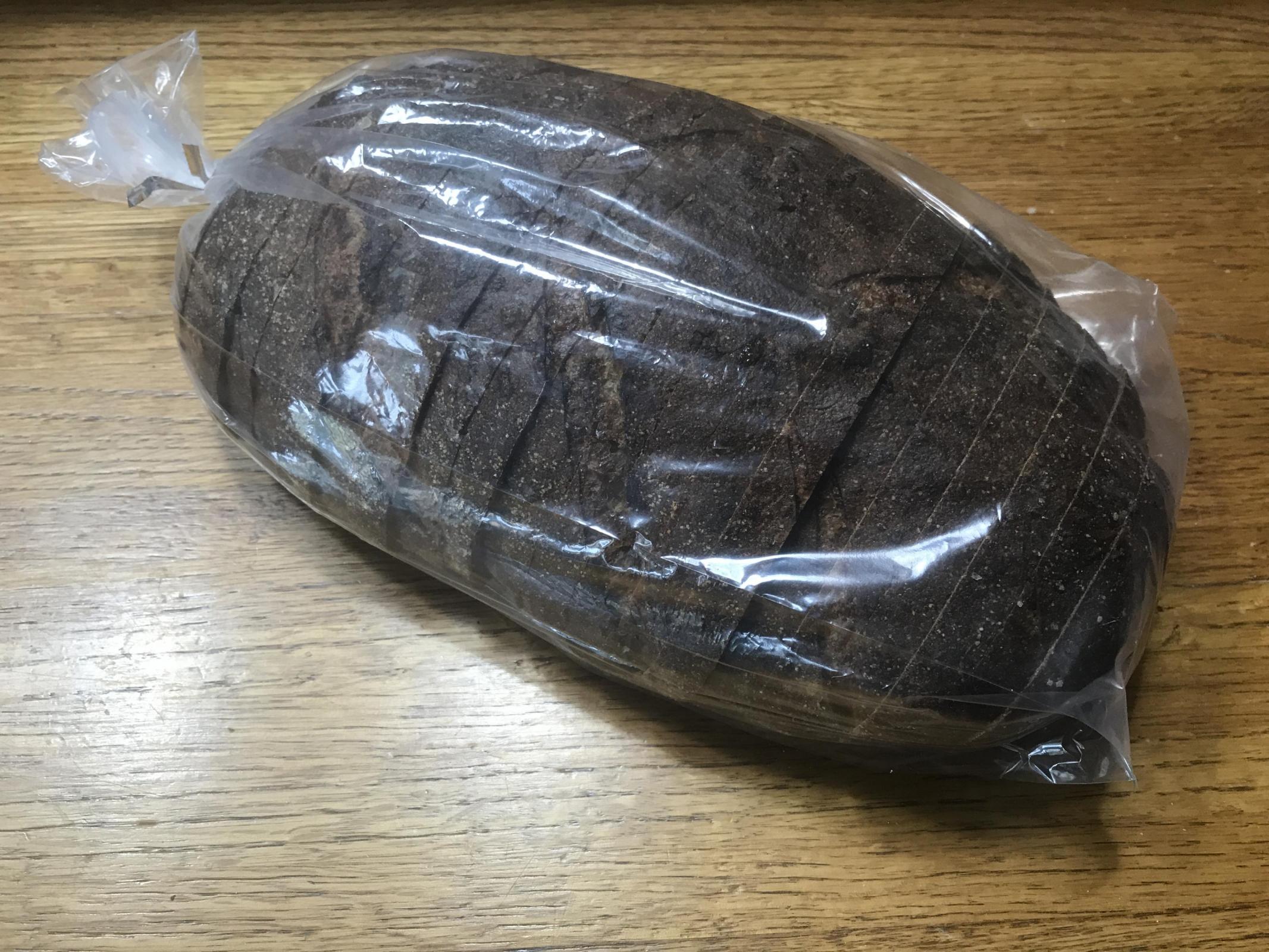 A few tweaks from the last 3 bakes that used Hamelman’s 40% Rye formula.

Taste -
The sesame seeds added slightly to the texture and flavor. The cocoa affected the color much more than the flavor. The bread darkened a little more and you had to really search to find any additional chocolate flavor.
Update - the bread is about 48 hr old and the flavor has definitely ramped up. It is my best tasting rye to date.

Texture -
The crust was only slightly thick, a good thing. The crumb was moderately moist and the chew was moderately substantial. The sesame seeds added a slight crunch to the crumb. All in all, a nice eating experience.

The Braid -
The 5 strand braid required a delicate touch, but it was easily manageable. I was surprised! BUT, after the final proof some areas of the strands were showing signs of degradation. I think the proteolysis from the whole rye (100% e traction) was too much for the dough. The braid might work if either the rye was reduced to 30%, or the rye was sifted to reduced some of the bran (ash content). The breakdown of the dough also greatly reduced the oven spring in the braided loaf.

My 100% whole milled rye levains never exhibit a large rise. I think using all of the grain, the lack of gluten, and the coarser grind have an affect on that. At any rate it raising the breads very well.

The flour was purposely milled to reduce starch damage. 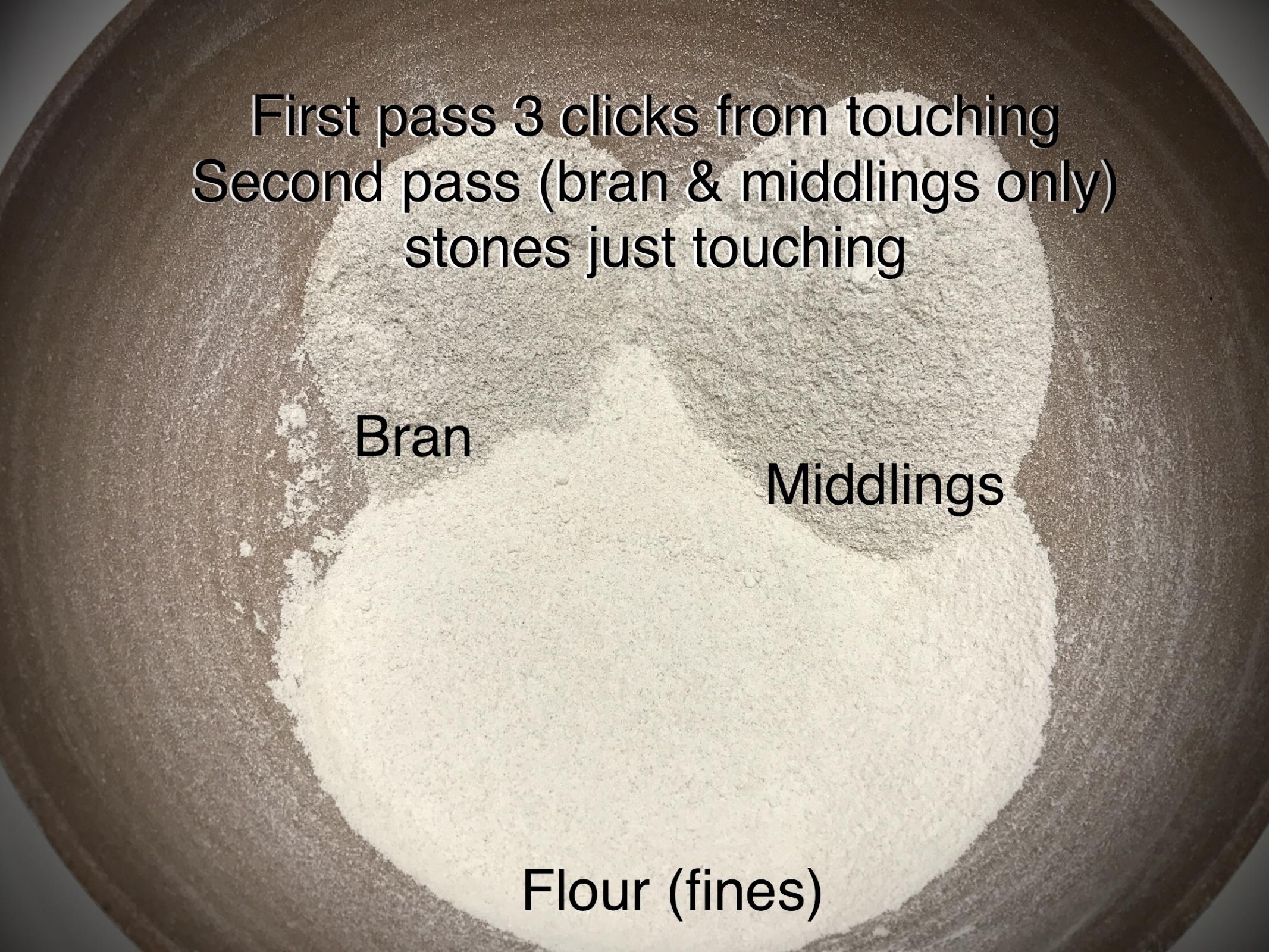 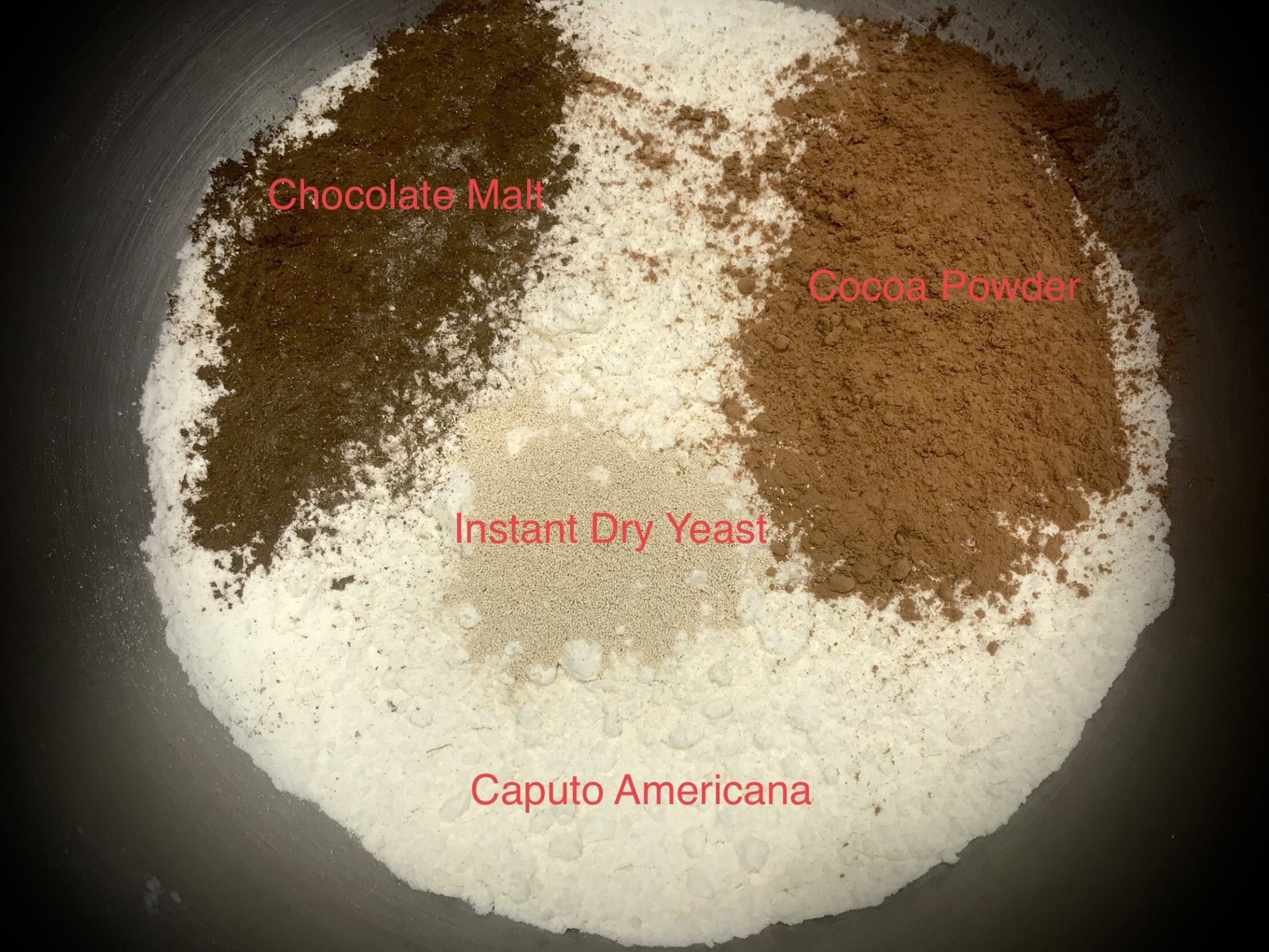 When I see the clean bowl below, I know things are going well. Especially when it comes to rye. 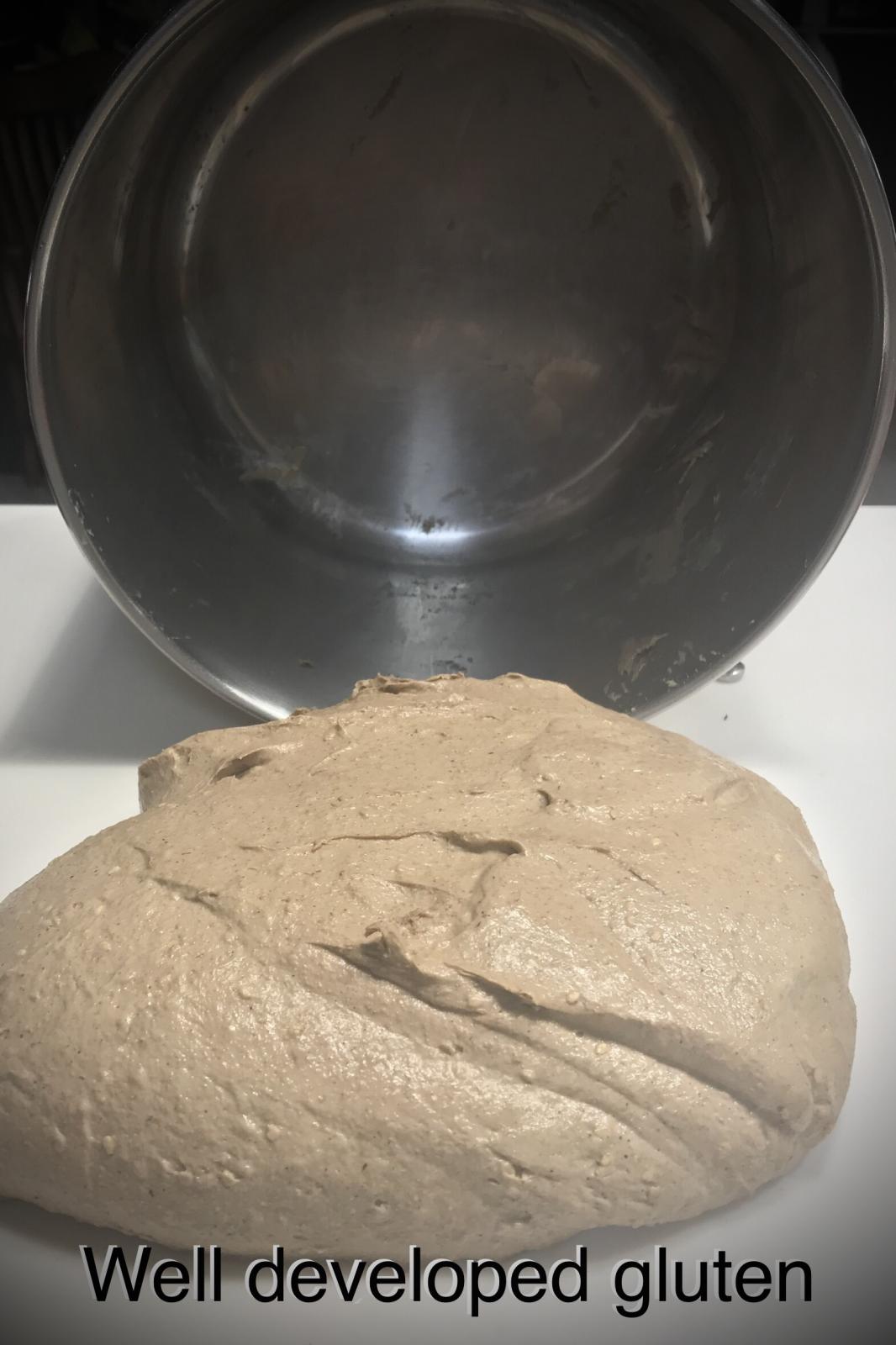 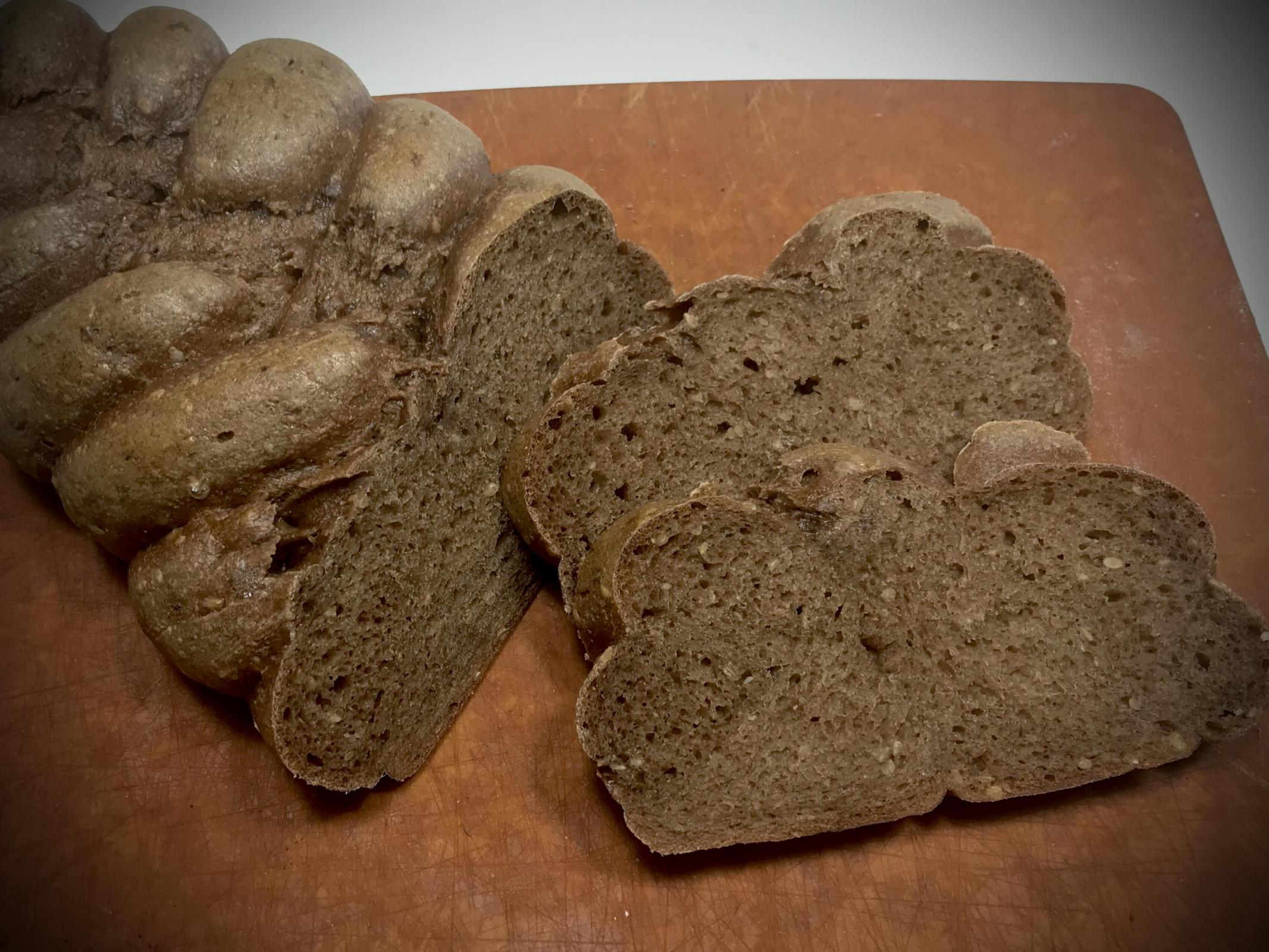 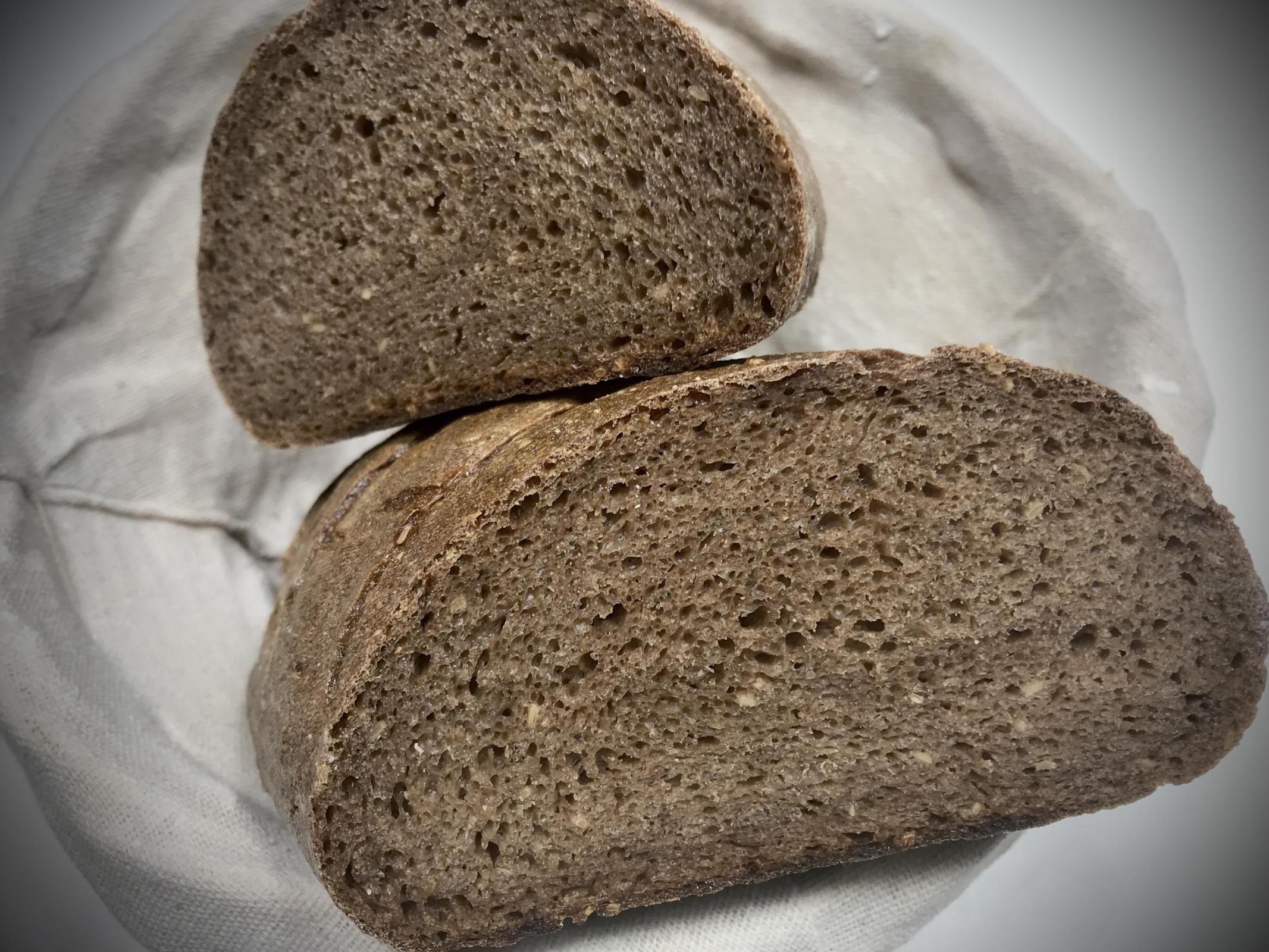 I wanted to explore adding whole wheat to Hamelman’s 40% Rye in the hopes that the bread would produce stronger braids. But that was not to be. 30% whole rye, 10% Hard Red Spring Wheat, and 60 white flour. The raw dough braided very well, better than last time. But the braids split open much more that the first attempt.

BTW - I didn’t care for the flavor of the newly introduced Hard Red Wheat. I much prefer the percentages and formula in Hamelman’s original formula. After 7 consecutive rye bakes, I whole heartedly agree with Another Girl that 40% rye is the sweet spot. No more, no less. For my taste 40% rye (100% extraction) is strong enough for me, but not too strong.

Here’s proof that I post the good, the bad, and the ugly.
Looks can be deceiving. 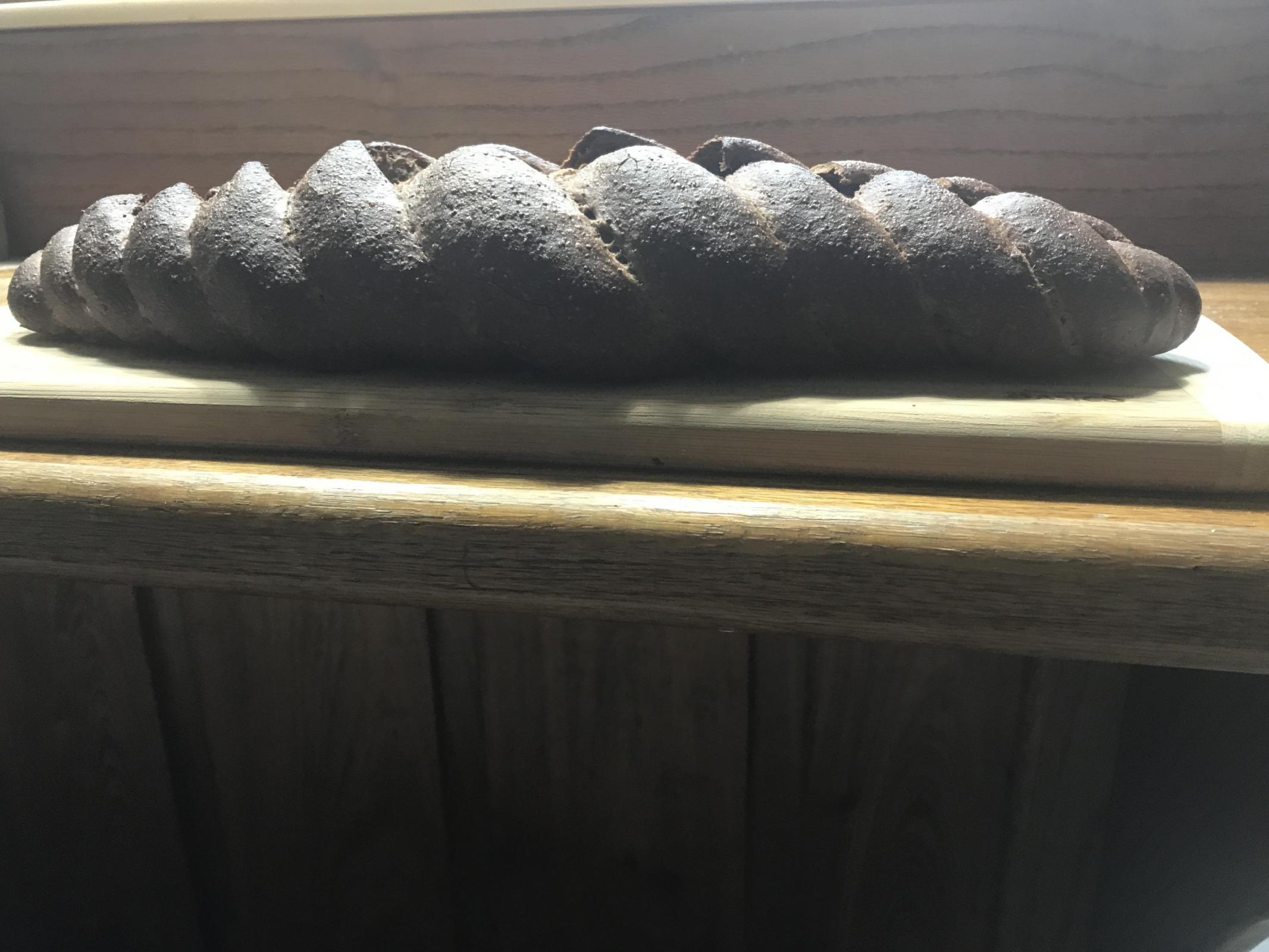 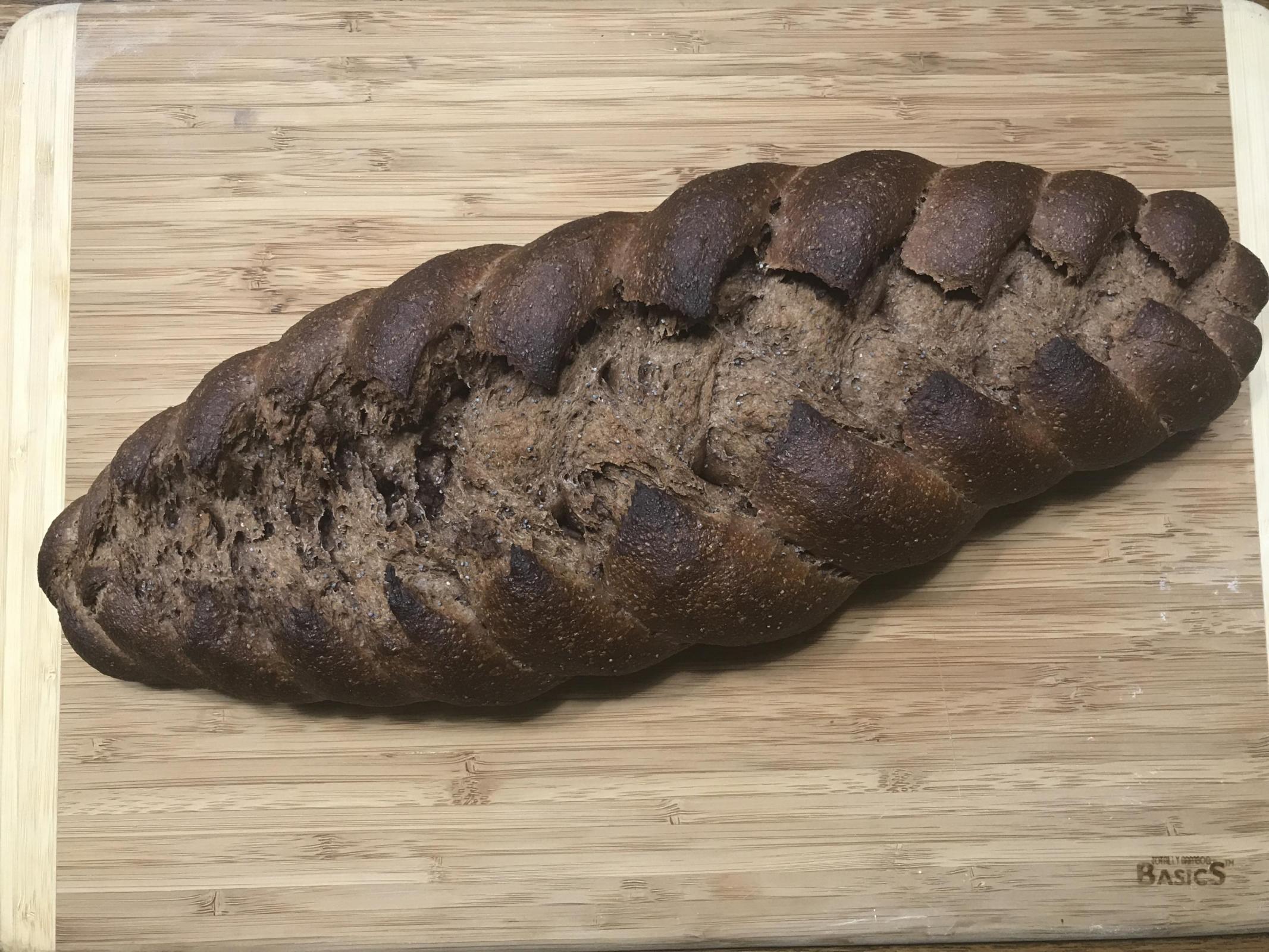 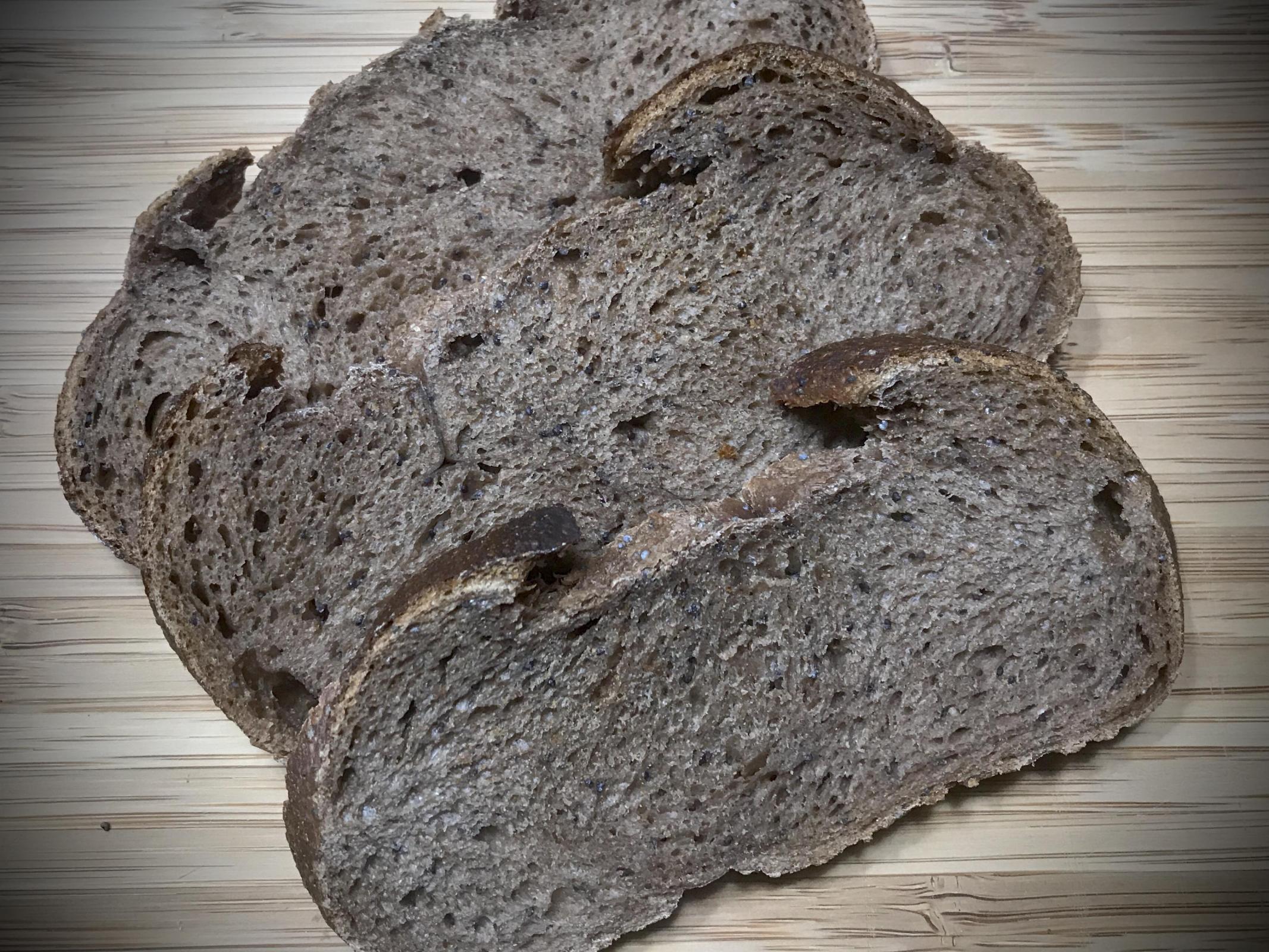 How important is it to use the IDY Dan?  I would imagine this bread fermenting so quickly without it given the inoculation percentage of the rye sour.  Remind me why it needs IDY if you have a chance.

I think you could eliminate the CY, but haven’t tried that yet. It does ferment robustly.

I advise developing the gluten in the mixer. It will take a while (mixing at slow speed) for the gluten to come together after the rye levain is added.

Yes I will use a mixer to develop the gluten before adding any of the rye sour.  I may use the IDY as the original recipe seems to use it, I think all the recipes in the CB seem to use IDY which I was surprised about.  Thanks Dan.