Prior to the many posting here about biga I had already decided I’d try a non biga ciabatta recipe.  One of the people I follow on YouTube, Joy Ride Coffee has a formula up that I decided to give a go.  I decided to make the ciabatta with a 12% white flour I have left over from an early baguette bake and only used whole grain in the levain.  The levain itself is my usual 100% hydration.

Bassinage adding salt and enough water to bring hydration up to 80% and then olive oil added followed by slap and folds x 250. Followed by 1 hour rest

one Lamination then 3 sets of coil folds at 45 min intervals.

Unsure how far to take bulk fermentation I ended it at 25% (probably a mistake) and the dough went into cold retard until the following day.

RT bench rest x 1 hour then divide and shape.  I snapped into a log, uncertain if that is appropriate for a ciabatta.  Rested in the couche seam side up for 1.5 hours until finger poke left a small dent only popping back up slowly and partially.

Baked at 480ºF with steam for 13 mins and then 420ºF convection without steam until golden brown.

One ciabatta split on top, which I wasn’t expecting.  This made me think that they may have been underproofed and I think they were somewhat.

The crust is quite thin and crisp while the crumb has a tender chew compared to most sourdough I make.  The flavour is alright, I think that the Quebec flour at 10% protein has better flavour, it certainly is more yellow in colour.

Here is my wine bottle helper (cheap wine I’ll never drink is good for something finally). 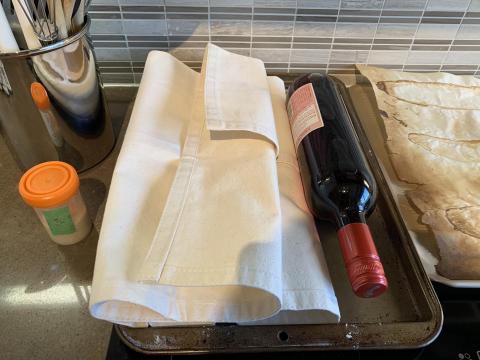 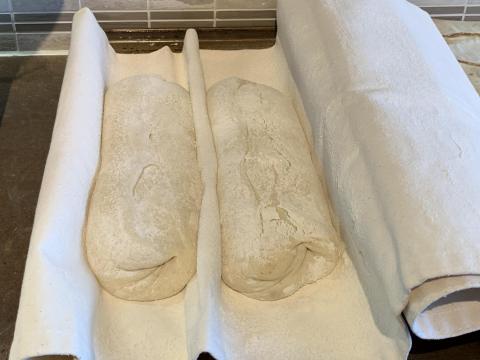 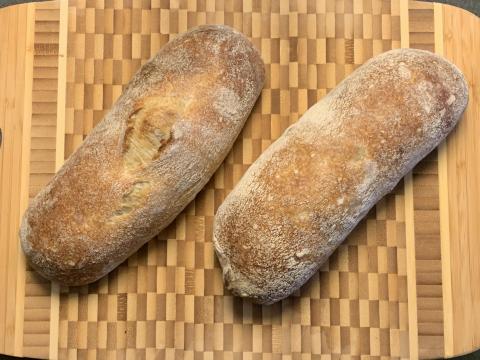 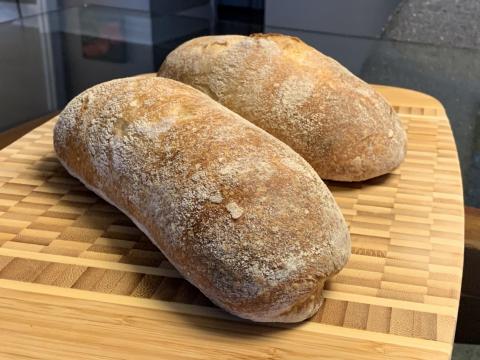 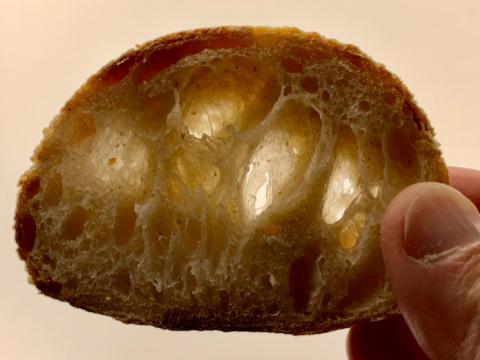 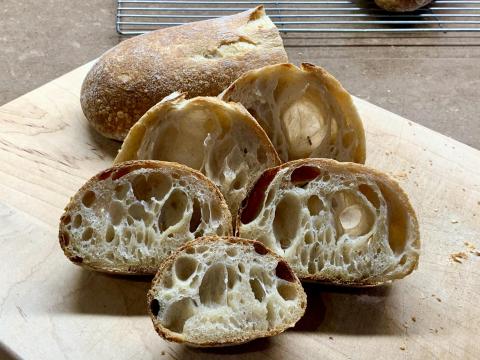 I baked Joy Ride Coffee’s Ciabatta formula which uses a 100% hydration levain along with 19% whole wheat (I used Red Fife) and made it at 80% hydration.  As I mentioned earlier I used the mixer to build gluten up very early on.  This had the effect of making the dough the smoothest non sticky dough I’ve worked with.

I ran out of time last night and had to end bulk at 50% rise in the aliquot jar.  This afternoon I took dough out of the fridge and after 1 hour divided into two.  I folded the long ends in about 20% and then folded the dough and floured the seam transferring them into the floured couche.  All seemed to be going well.  After a 2.5 hour bench rest when the oven was heated to 500ºF I attempted to transfer them from the couche to the transfer board.  This is when disaster struck.  I think the dough is somewhat overproofed, not sure why since I only bulked to 50% rise, perhaps the final bench proofing time was excessive for this dough.  Also perhaps the acid load was too high and the dough was getting proteolytic.  So when I attempted to transfer the first ciabatta to the transfer board, it was very very stuck to the couche, this despite my flouring it at least as heavily and probably a fair amount more than I’m use to doing for the baguettes.  It was so stuck that I have to use my fingers to pry the dough off the couche.  It was bad enough that after using my fingers to disconnect the dough from the couche there was still some dough stuck to the couche.  At this point I didn’t have much hope for these ciabattas.

Eventually the ciabattas were on the peel seam side down and baked.  They baked with steam at 480ºF for 13 mins, then 420ºF for 15 mins without steam at which time they were quite dark, but didn’t feel like they were fully baked yet.  I dropped the temperature to 350ºF and gave them another 5 mins to try to get them baked without burning.

I think when I try ciabatta again I will try with a biga. Beautiful hate giving up on a recipe that others have had good success but I’m not sure will work for me. Say, I've seen RT many times and can't figure out what it stands for. Can you unpack that for me?