I decided I’d try to apply some of what I’ve learned making baguettes to my hearth loaves.  One thing that has been in the back of my mind for a while has been whether or not my use of high protein Canadian bread flours 13.3% protein could be preventing my heart loaves from having a more open crumb.  I know that achieving an open crumb is multi factorial and for many not worth the trouble, but it is something I wanted to see if I could eventually achieve.

I threw together a formula with:

I did an overnight levain build 1:4:4 and a saltolyse dissolving the salt and diastatic malt in the water and then adding the flours.  Mixed until a shaggy mass.  Both the levain and dough were left on the counter at a cool room temperature overnight.  The ripe levain was added to the dough and pinched in then a bowl scraper was used to stretch and fold until it was well combined.  Structure was built with a strong bench letter fold followed by a lamination and then four sets of coil folds.  A good windowpane was attained.  Bulk was ended when the aliquot jar reached 60% rise.

In retrospect the hydration was a bit too high for my flour, I forgot that lower protein flour doesn’t absorb water as well as high.  I should have taken my own advice and held back some of the water when mixing.  The dough just felt wetter than usual.  When I shaped the dough it didn’t keep “standing proud” very well, so I added stitching in the banneton hoping that it would help keep that surface tension.

The next day, about 20-30 mins prior to baking I put the dough into the freezer hoping that it might help keep its shape better when turned out of the banneton.  Somehow things worked out alright, I didn’t get a pancake after all. It wasn’t what I was hoping for, but it wasn’t a disaster.  I will try this again but with less water. 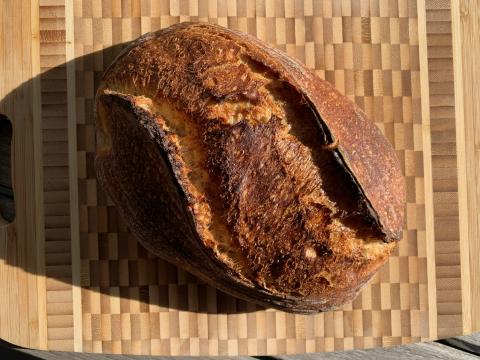 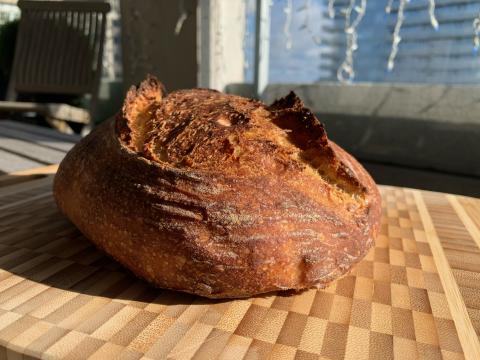 Excellent bread, and I do appreciate the precision you bring to your baking and the fact that it reads like a scientific paper! Looks like you achieved your desired crumb, but curious to know what the mouth feel of this bread was like?

As someone who lives in a country where the typical stongeround flour is around 11.4% I've looked rather enviously towards the high protein flours that are routine in North America.

And, in some of my recent attempts I've been experimenting with the addition of vital wheat gluten to achieve similar high protein.

In these experiments it is somewhat noticeable that such breads have a texture that is tending more towards 'rubber band' rather than soft and airy and am left wondering if the mouth feel also needs to be considered and described.

Yes in particular I have read that adding vital wheat gluten can cause the texture of bread to be more rubbery.  I haven't used vital wheat gluten because in fact it is hard to find flour that isn't high protein here in Canada.  I've had a very hard time finding even all purpose flour that wasn't 13.3% protein.  So far I've only found one good all purpose Canadian flour at 10% protein.

The crumb was perhaps softer than what I'm used to getting, however, it isn't a fair comparison because this bake had less whole grain than what I usually bake.  I'll have to bake this again and try to optimize the hydration and structure and see where that gets me and then try without the lower protein flour to compare.  But again, it may not be a fair comparison because I'll have to increase the hydration a bit for the higher protein flour.

Have you checked it with a Geiger counter? Baguette school has improved all of your bread. I like the swerve in the score and the holy radiant crumb. It looks like you pushed the fermentation to the limits. You have a nice blend of blend of Arts and Science in your bread. A little more techno/pop than rock and roll but catchy none the less.

LOL you’re right Don, the top of the bread is glowing a bit, I’ll have to see if I glow in the dark now too.  I’ll give this a go again and see if I can improve a bit more.

Good experiment Benny. Nice crumb. How would you describe the taste given the floor mix, high hydration and length of fermentation?

Thank you Gavin.  The crumb has a mild tang and the flavour from the red fife and rye are very milk compared to other sourdoughs I’ve made without inclusions.  The crumb had a bit of a softer chew than usual I think as well.