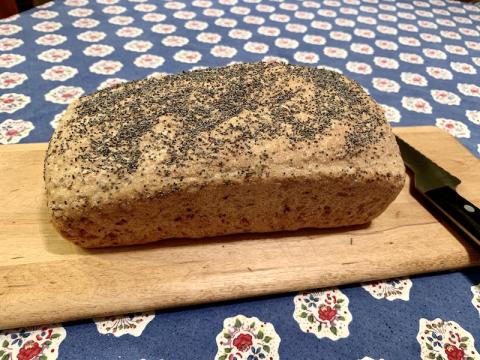 Unlike many bread that are called "Whole Wheat," the one in Peter Reinhart's "Bread Baker's Apprentice" is actually 100% whole wheat. This is a delicious bread that I have made many times but not for several years.

Today, I altered my usual ingredients in several respects.I have usually made it with a soaker of bulgur and fine milled whole wheat flour. This is the first time I have made this bread with home milled flour. The recipe calls for a soaker of coarsely milled wheat but gives the option of using other grains. For this bake, I used rye chops. I had been wanting to make this bread with white wheat flour for some time, and for today's bake I used freshly milled White Spring Wheat.

With the exception of those changes in ingredients, I followed Reinhart's formula and procedures as written. Fermentation and proofing were done in a Brød and Taylor Proofing Box at 76ºF. Bulk fermentation was for 1 hr, 45 min. Proofing was for 90 min. 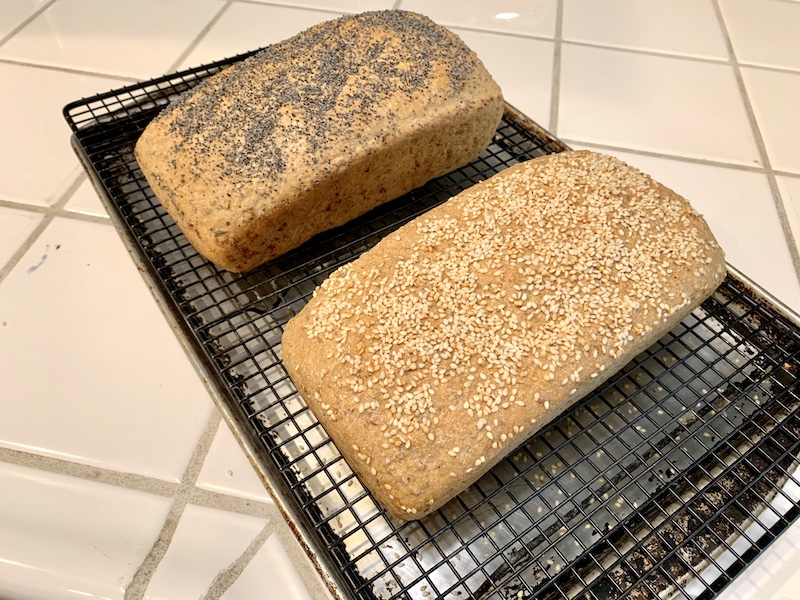 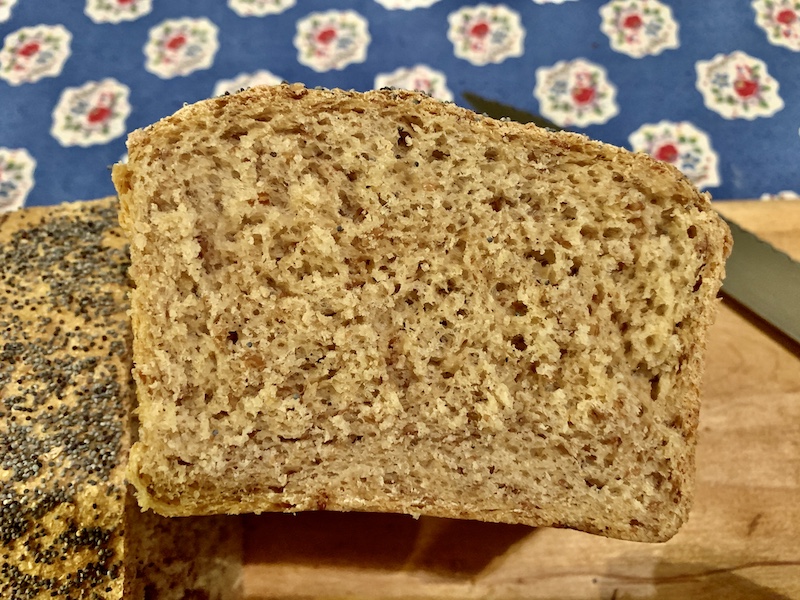 The crust was slightly chewy. The crumb was very tender - almost cake-like. The flavor was delicious. It was wheaty and sweet, with none of the grassiness found sometimes with whole wheat breads made with red wheats when freshly baked. There was no identifiable rye flavor except maybe a bit of earthiness.

I can't say my modifications improved on past bakes of this bread, but this was was certainly delicious, and I would not hesitate to make it this way in the future.

That looks wonderful David, I haven't made a sandwich loaf in a long long time, maybe I need to get on that.

This is a tasty bread. It makes great toast. It is a bit crumbly, untoasted, for sandwiches. Txfarmer did an over-mixed (IMO) 100% whole wheat loaf that had a more open crumb by intensive mixing. I tried this once and got really good gluten development but at the cost of dough oxidation and loss of flavor.

If I were to want a yeasted WW bread for sandwiches, I would go with a 50-70% WW, like several of Hamelman's "Whole Wheat" breads.

Looks delicious! Wow, 100% whole wheat! Beautiful. I've been meaning to try Hamelman's version, which I think it also seeded, but probably not 100% whole grain. Definitely a good staple to have on hand.

There are so many good breads to try and just not enough time!

Hamelman has several whole wheat breads, both sourdough and yeasted. Most (all?) are 50% whole wheat. Which are you going to try?

Definitely not! I was just thumbing through his book - there are just so many. I'd love to try his Whole Wheat Bread with multigrain soaker. It's 50% WW with cracked wheat, coarse cornmeal, millet, and oats...wondering if it'll be easy to find the cracked wheat and the millet. Maybe just Amazon!

Have you ever tried that one?

I need to make a list because there is so much on my to do list including panettone and some seeded long loaves, not french bread but in Philly area they are like hybrid of baguette and Italian bread. So good!

Marie, as you're in a big city, you likely have nearby Indian grocery stores.

Allow at least 2 - 3 hours to browse/look  at everything the first couple times you go to a Patel Brothers store. Take notes!  Seriously.

Leave credit/debit cards at home and only take cash so you don't over-shop.

(Middle-Eastern stores often have cracked wheat and millet too.)

Here are pics and prices of durum flour at my local Patel Bro's. http://www.thefreshloaf.com/node/62248/praise-durum-flour-brar-mills

Wow, I never knew about Patel Bros!! Unfortunately, I'm about an hour away because I'm about 30 min south of the city and it looks like the local Patel Bros is 30 min north. That said, it's going to be a road trip that I will plan for. Thanks so much for the suggestion.

I just checked on Yelp. You should not have to go all the way to Patel's.  I just used them as an example, as they are a national chain.

Look for "Indian Grocery Store" on Yelp.  there's half a dozen around downtown and in the surrounding suburbs. Sometimes they go by "International" or  "Asian" or "Bazaar."

Tips: Pay close attention to expiration dates. I never buy "repacks" (where the store breaks down a large bag of somethjng to smaller bags) from the small places because you can't be sure of the dates.

I just checked that and saw one within 15 minutes...woo! Awesome, I will be stopping by soon. I did just order two 50 pound bags of flour plus containers! I got Sir Lancelot high gluten for bagels and panettone and Central Milling Electra flour for some sourdough and sandwich rolls...very excited!

I'm jealous.  That Sir Lancelot should make good Neopolitan pizza.  It's pretty close to All Trumps, no?

I hadn’t thought of that! Will try:) I have a Blackstone pizza oven that bakes a great Neopolitan!

I haven't tried that specific bread, but, if you are a sourdough baker and haven't made Hamelman's "5 Grain Levain," you have missed one of the most delicious breads ever.

I wouldn't worry too much about not accessing exotic grains. You can do reasonable substitutes with good results. Most sources require bakery-size purchases, but Bob's Red Mill has lots of options in 1 lb bags. I have subbed bulgar for cracked wheat.

Oooo..five grain levain sounds fantastic! Thanks for calling attention to it. And thanks for the suggested substitute, that makes complete sense to me.

I think I may have a lot of your recipes bookmarked:)