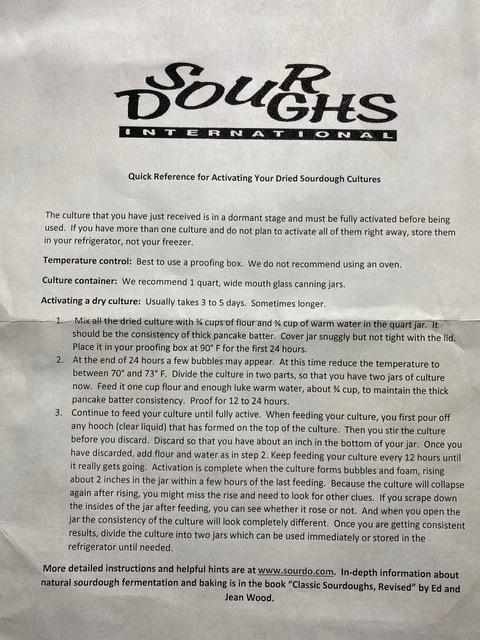 So I bought two italian sourdough cultures from https://sourdo.com/.  I have one Ischia and one Camaldoli.

I am new at this so this is my first time doing any sourdoughs period.  I follow directions!!!!  This company say's QUOTE "wants you to start the first 24 hours at 90 degrees in a proofer so it promotes the growth of lactobacilli and thus increases acid production.  High Acidity helps prevent contamination of the active culture by nonsourdough organisms present in most flour, most of which do not thrive in an acid environment.

I followed the above direction, and did 90 degrees for 24 hours.  I was using King Arthur all purpose flour as well.  I noticed after 24 hours in a proofer there was some kind of activity, bubbles and such.  I opened the jar to split the starter into TWO jars.  the smell that came out of the jar smelled like VOMIT.  I have no other description, it was horrible, nothing like yeast or anything.  I added my 1 cup of flour and 3/4 cup of warm water and stirred and put the lid back on the mason Quart size jar and left it at room temp. (72 degrees)  for the next 12.  This morning I did not see activity and did not see bubbles.  I did see the nasty liquid sitting on the top the hooch I believe.  I opened both and they both smelled horrible like vomit again.  I poured off the liquid, mixed it, discarded all but 1" of the starter and added 1 cup of flour and 34 cup of warm water and mixed both jars.  I have a rubber band marking the top level.  It has been 3 hours since I fed it and I do not see bubbles, not activity.  just some hooch forming at the top of the starter.

I emailed the sourdo company where I bought this from and the lady basically told me it might be the King Arthur flour and to switch to Gold Medal flour instead.  I thought that was weird.  AP Flour is not all that different so why would Gold Medal be any different.  Also so sold me to put the lid on snug, that also is different than the instructions they provided.  I asked for a replacement of the ischia starter and she basically said no she would just refund me.

ANY HELP PLEASE!!!  I really want to try this Ischia starter as I want to make amazing Neapolitan Pizza.  I thought this starter would give me the best chance.  Looks like now I have two VERY SMELLY starters that are not doing much.  Granted I am only 39 hours as I type this but still that smell is just awful.

Any help for this newbie would be greatly appreciated.

Some tips which may help:

2) scale down the flour and water to 1/2 cup each.  The same amount of starter on say half that in the directions will ferment faster.  Try this for the first two or three builds then revert to 1/3 of the starter, 1/3 of the flour (which is not the problem here) and 1/3 water.  By weight.  buy a cheap scale on amazon, many are around $10 and will go up to 10 lbs.

5) I think that will work.  I love my Ischia starter.  I also use San Fran sourdough from the 1800's which also works well for pizza.  Refresh several times before making your recipe.

Keep at it!  I also dry starter on a paper plate, crumble and retain for future use as a backup.

I bought the Ischia and the San Francisco starters from them and had no issues.  I think I have some dried ischia in the freezer, if you can't get yours going, send me a pm and I will check this weekend and if I have some, I will send it.  Agree with Nick, once you get it going,  make some, then dried it ,  and freeze it as a backup.   BTW,  IIRC, they say that anyone who buys a starter from them can give some to someone else, they just can't sell it.

In the first couple days, foul odors are normal.  What is happening is that there are all sorts of microorganisms living on all surfaces.  This includes on the surfaces of wheat plants, which in turn means in flour.  When you add water to flour and let it sit At a moderate temperature for a number of hours, some of these bacteria begin to reactivate.

At first, the only bacteria that can withstand this environment are some very unpleasant (and potentially harmful) little nasties that produce foul odors.  The upside to this is that while producing those fouls odors, they create waste byproducts that cause the pH of their environment start to drop (lower pH = more acidic).  The flurry of activity that you see on or around day 2 is actually caused by these bad bacteria.  As time passes (usually a day or three) the acidity of the mix continues to drop, which makes the environment more hospitable to other (less unpleasant) more acid-tolerant bacteria.  As these new bacteria take the stage, their byproducts continue to acidify the environment, which leads to the first (very unpleasant) bacteria no longer being able to survive in the starter.

At this point, most starters go into a lull that makes us question literally every single thing about this process, and it’s typically this point that drives so many people to sites like this one to find answers.  It will look like it’s dead.  It might bubble, but only a little.  It doesn’t rise.  It’s just goop, sitting there doing nothing, nothing I try makes a difference, HOLY CRAP DID I KILL MY STARTER?!?!?   OK...  Relax...  It’s all good...  Put down the sugar bowl and step away...

Ah, good.  That’s better.  We’re all calm.  So...  This lull that starts around the middle of the first week may look like nothing is happening, but there is actually quite a good bit going on.  The enzymes and bacteria that are active at this time are still converting starches into sugars, and are still consuming those sugars.  They are still producing waste products that are lowering the pH.  We just see no outward signs of this because these microorganisms doo it all without creating Carbon dioxide (hence the lack of bubbles).

Eventually, though, these acidifying bacteria pave the way for bacteria that produce lactic acid, and shortly after that the starter’s environment becomes acidic enough that wild yeasts (which have been there all along) can finally emerge from their dormant state!  The wild yeasts and the lactic acid producing bacteria, from this point forward, create a symbiotic relationship, which helps to prevent other microorganisms from invading their environment.

I have to think that what has happened with your starter is that by mixing the dried (inactive) starter with fresh flour and water, the pH of the mix was not acidic enough to allow your starter to activate prior to the first round of bad bacteria.  If you go through the process, it’s possible that you may wind up activating the fancy Italian starter, but I suppose it’s also possible that you may wind up succeeding in activating a less exotic strain of wild yeasts instead.