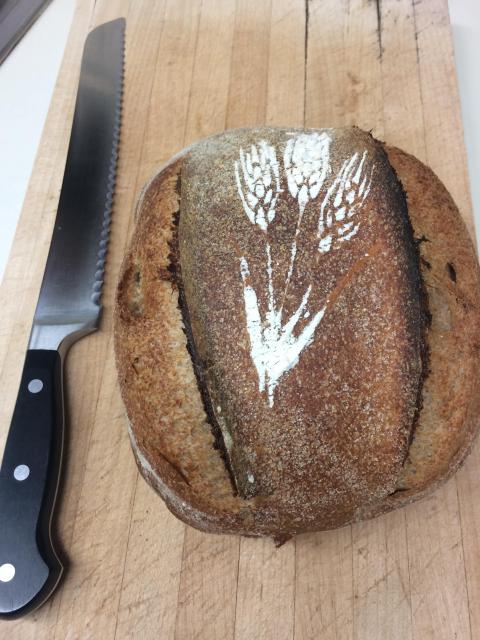 I've recently landed here at TFL on a quest to bake a bread made of one half or more home-milled grain that I really like - that I can't help but grind,  mix, rise, shape and bake over and over again. The whole grain in this bake is home-milled, made of organic spelt, rye and Yocora Rojo hard red spring wheat all sourced from Breadtopia.

My quest is of course driven by health and flavor objectives. Like most people - I want it all. Not too long ago I happened upon Elly's Everyday youtube channel and her approach using an overnight cold autolyse in the fridge. I thought I'd try that guided by another Maurizio recipe, his Whole Wheat Sourdough. I used all home-milled hard white wheat, some of it sifted to substitute for the bread flour and I liked what I got - a (mostly) whole wheat bread with the mellower flavor associated with hard white wheat and a hint of sweetness due to the extended autolyse. The quest was definitely on.

But for this morning's bake I thought I'd try yet another overnight process that I saw from youtuber Joy Ride Coffee where the home-milled grain is sifted and the bran is soaked with boiling water and hydrated overnight. I also wanted to try this baker's gluten development methods inspired by Kristen Dennis of Full Proof Baking. Would I get a wildly open crumb? I wanted to see.

Maurizio's guide would require 493 grams of berries. I ground all the grain in the recipe with my Mockmill 100 and sifted out 148 grams of bran. Wow. Joy Ride Coffee's video shows only 15 grams of bran from 180 grams of berries. She then added 50 grams of boiling water. Would I soak my bran with 450 grams of hot water? No. I settled for 300 grams. The next day I mixed the hydrated bran, the sifted, home-milled flour, Central Milling AP flour from Costco, a tbsp of vital wheat gluten, 10 gm of diastatic malt powder and the called for water (minus the 300 gm that soaked the bran).  I let that autolyse for 30 minutes before mixing in the levain and salt with some reserved water and then following up with about 8 minutes of slapping and folding in the mixing bowl.

I had a pretty thick, somewhat heavy dough mass at this point with the high hydration typical of Maurizio's recipes. My next challenge was to further develop the gluten like Joy Ride Coffee. Maurizio calls for three stretch and folds over a 3 1/2 hour bulk ferment. I would substitute an initial "strong" fold, followed by lamination, followed by a coil fold. My dough mass was formulated to produce two loaves. Joy Ride Coffee's video shows a single loaf. This was going to be interesting.

First the strong fold. With all the dough I had this fold went surprisingly well. This was the first time I ever did this kind of stretch and fold but I gave it my best shot. The effort left some room for improvement.

After a half hour rest it was time for lamination. Oh boy I'd never done this before. But again it went ok. The largish dough stretched pretty well over the work surface. I could have done it better and it wasn't done as well as in the video but yes, I could do this again. I could get good at this.

One more half hour rest and it was time to coil fold. Ok I had too much dough to coil fold. I could have split the dough in two but I don't have the glassware for two loaves. Maybe next time. I did a standard stretch and fold and let the dough rest for the remainder of the bulk ferment.

Perhaps I should have extended the bulk ferment. I wasn't seeing the activity I was used to seeing. But I was measuring dough temperature from beginning to end and it was all good. I was pressed for time so I stuck to schedule. Did the pre-shape, counter rest, final shape and cold proof till the next morning.

Time for the pictures: 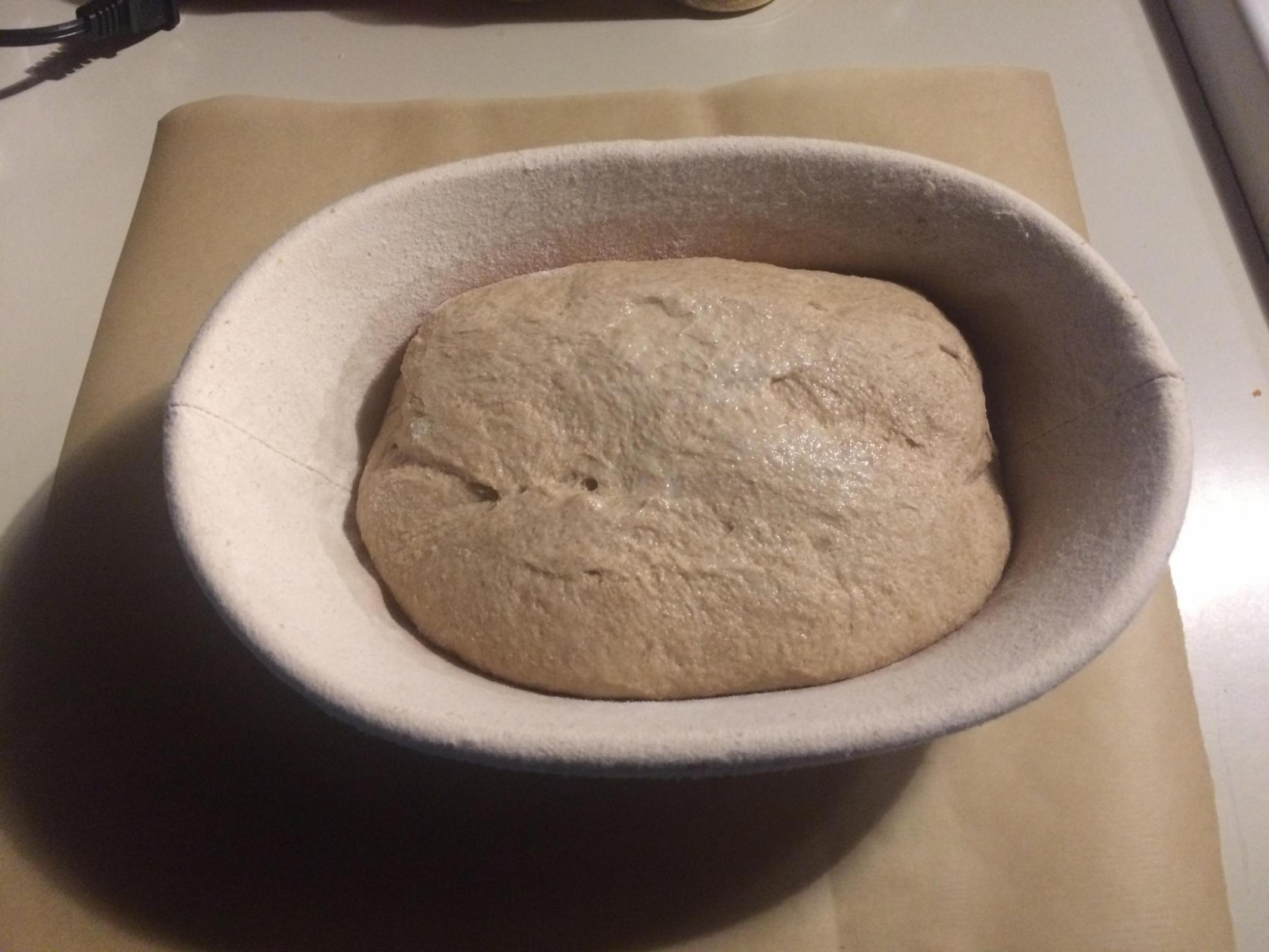 I was in a decorative mood: 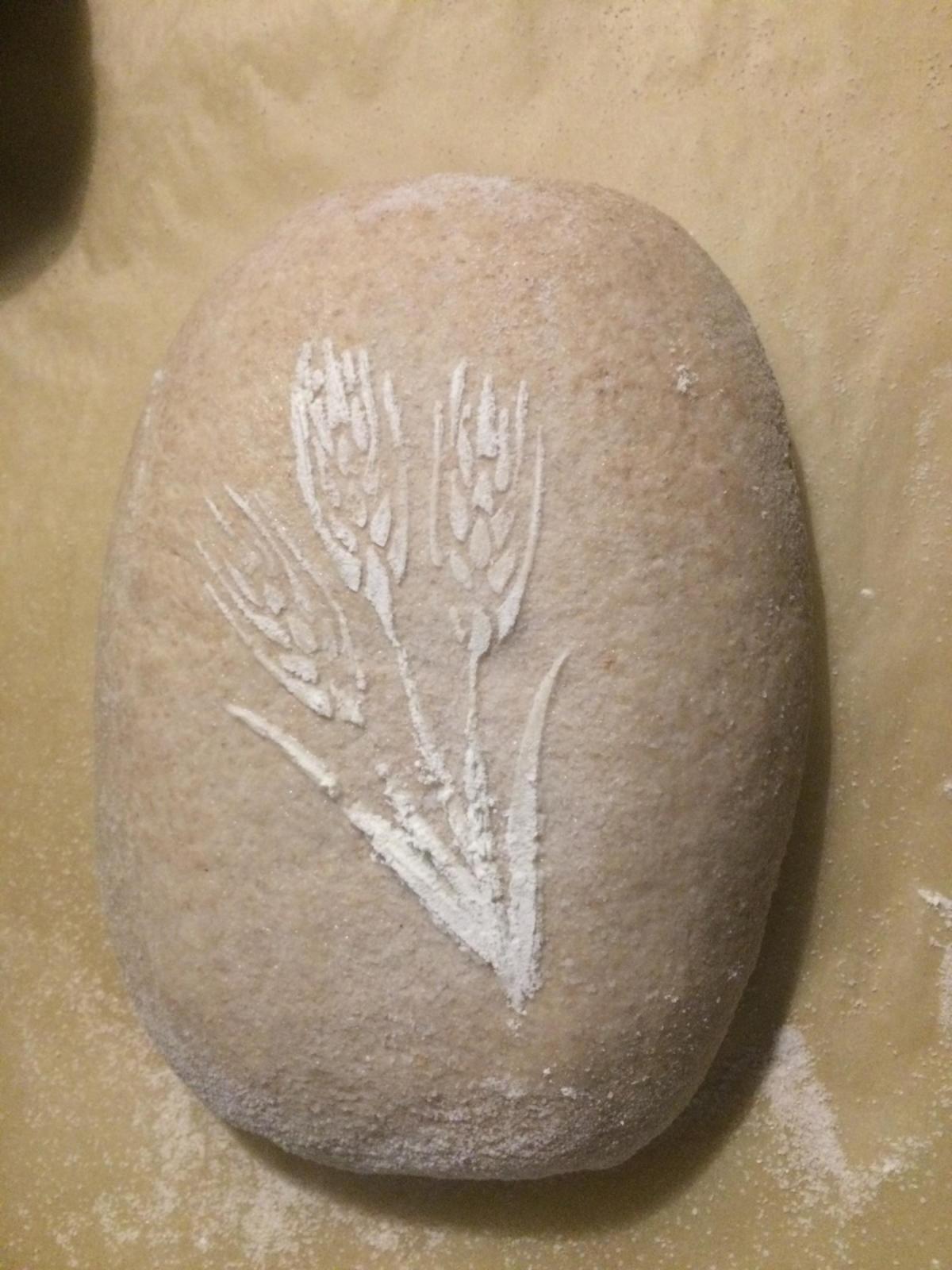 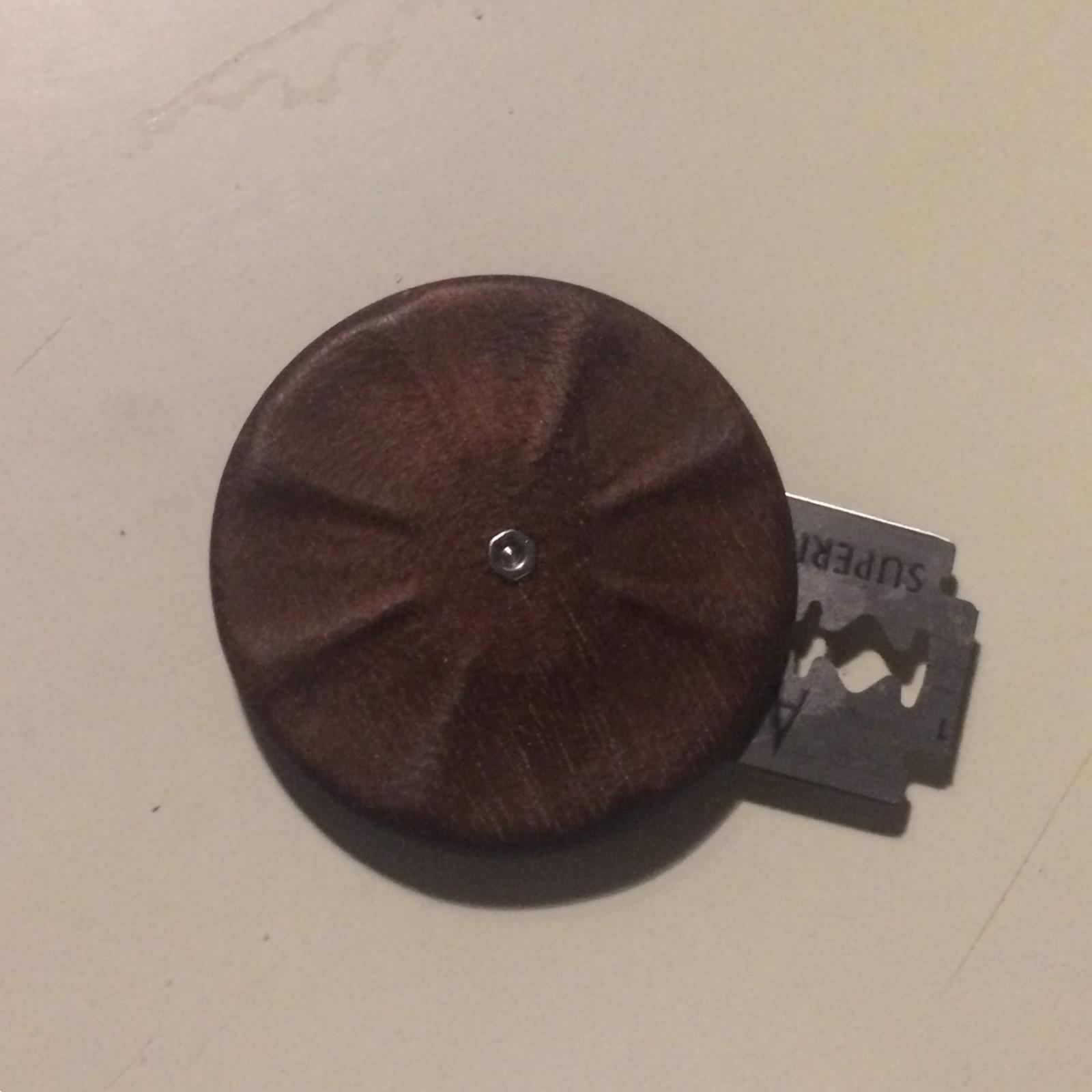 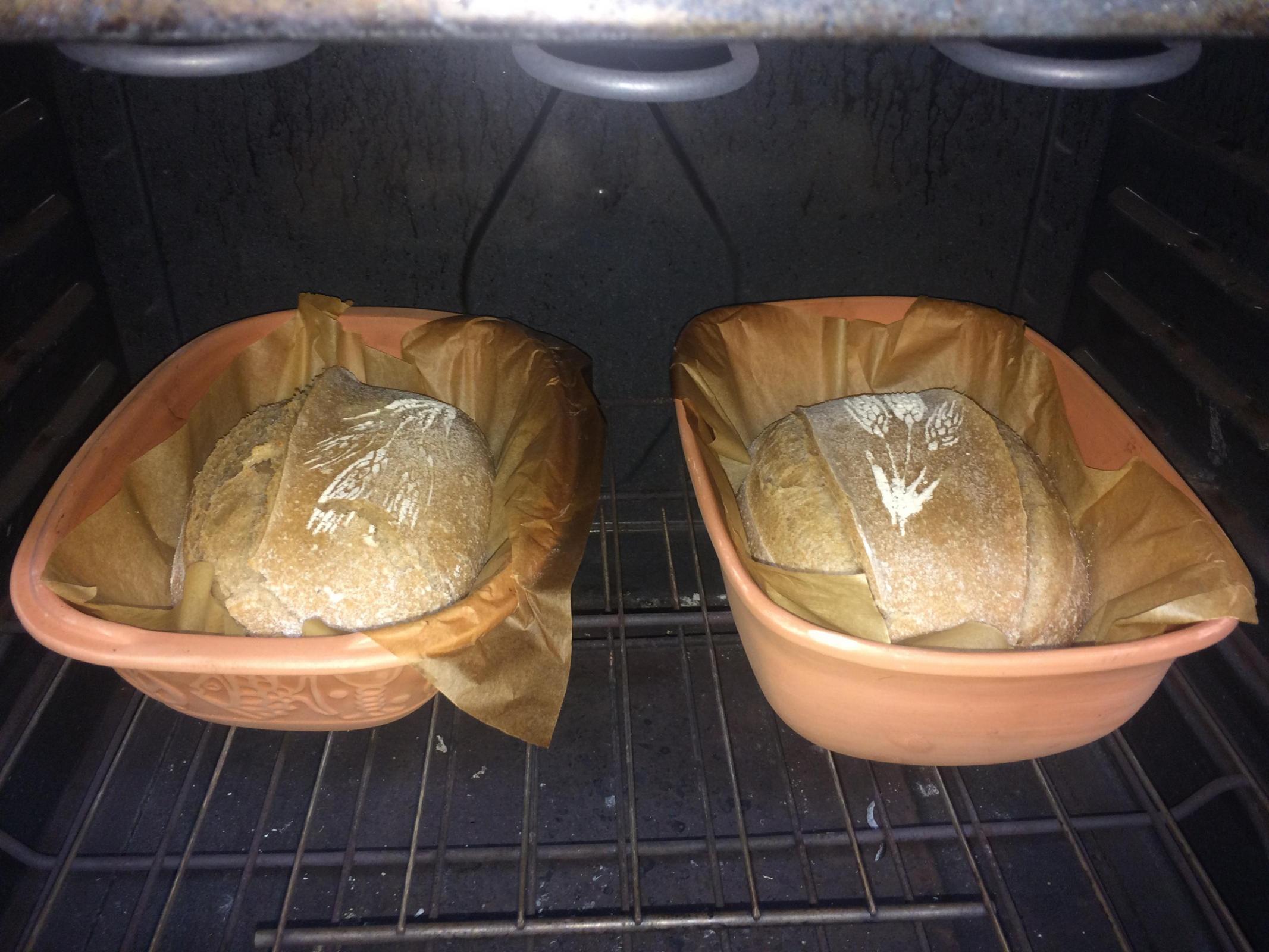 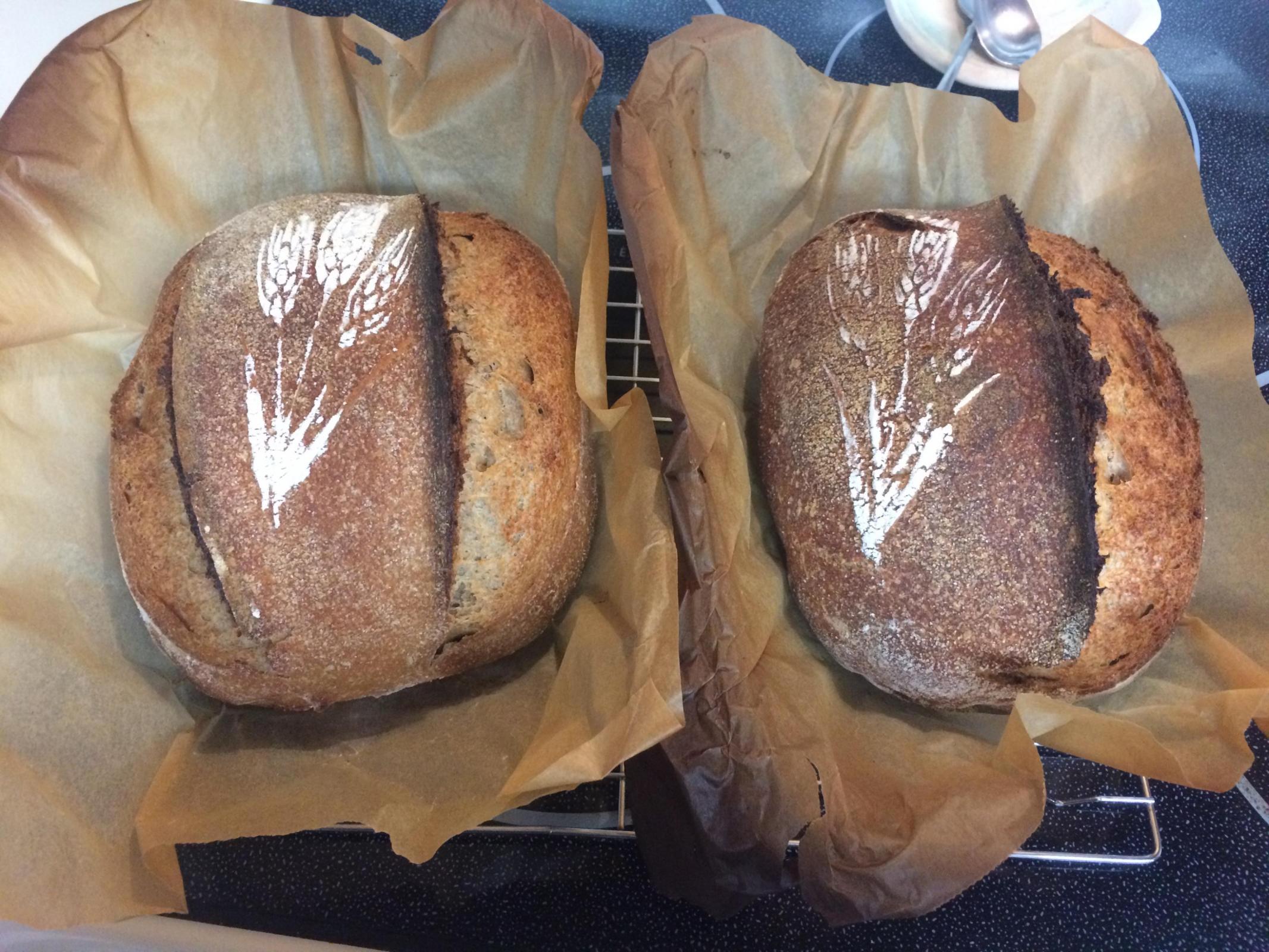 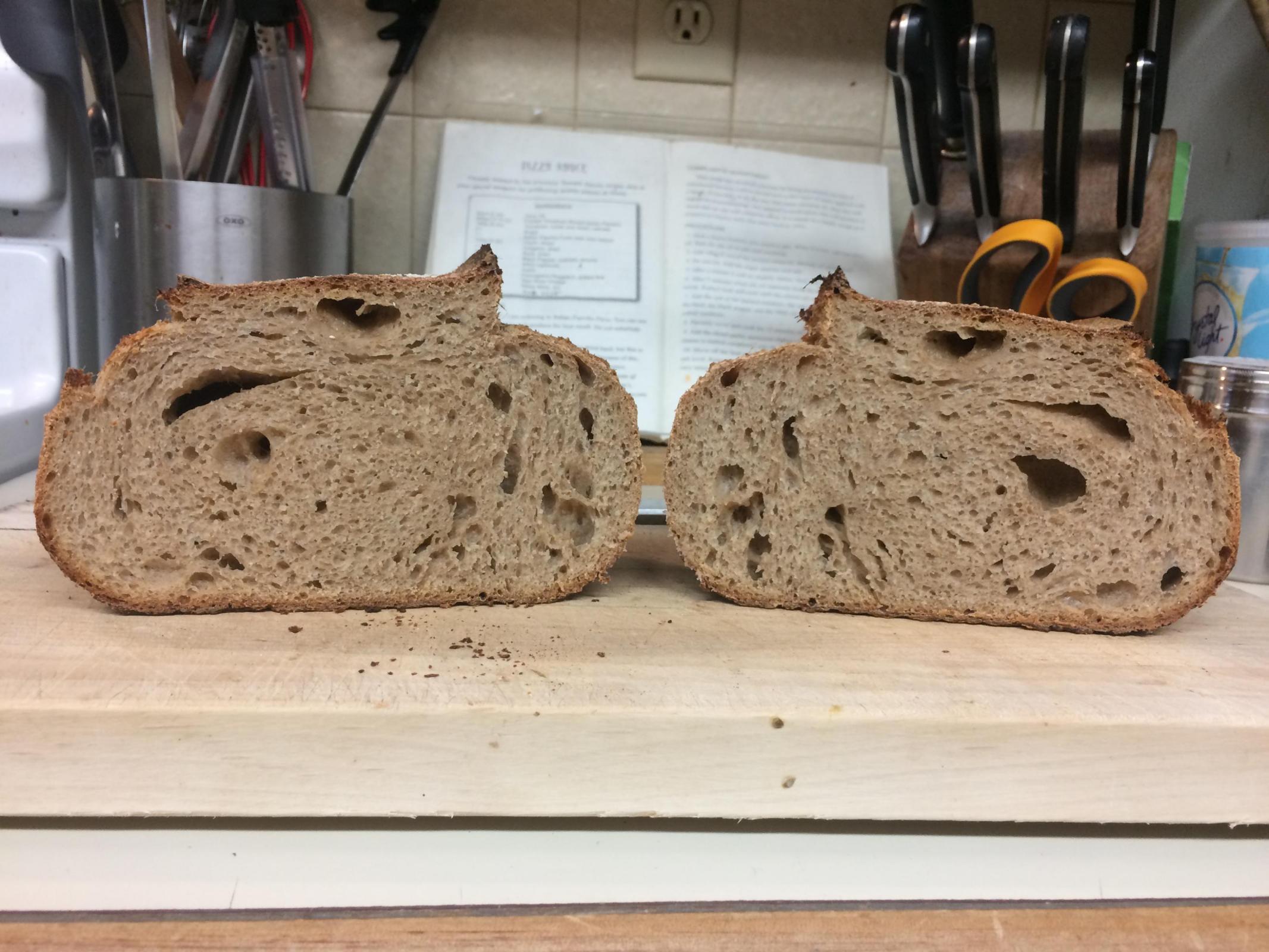 Is this crumb wildly open like what Joy Ride Coffee and Kristen gets? No. But I'm ok with it. Some folks here at TFL aren't fans of the open crumb (the mustard falls in my lap, etc). They've got a good point. This crumb is moist, not too gummy. The crumb flavor has depth, is mellow, nuanced, just a hint of bitter and some tang. The crust is pretty good with sweetness, could be darker. My family is devouring the bread, giving me the thumbs up. I'm good with this bake.

But as always, the quest continues.

Update: it just dawned on me that the Central Milling AP flour is malted. Five grams or less added malt powder is needed for mixes with this flour.

Great looking bakes VRini, I like the colour of the crust, the scoring and the stenciling, all very nice.  It sounds like your family loves the flavour, so thumbs up all around.

It's fun for me trying new things and getting good results.