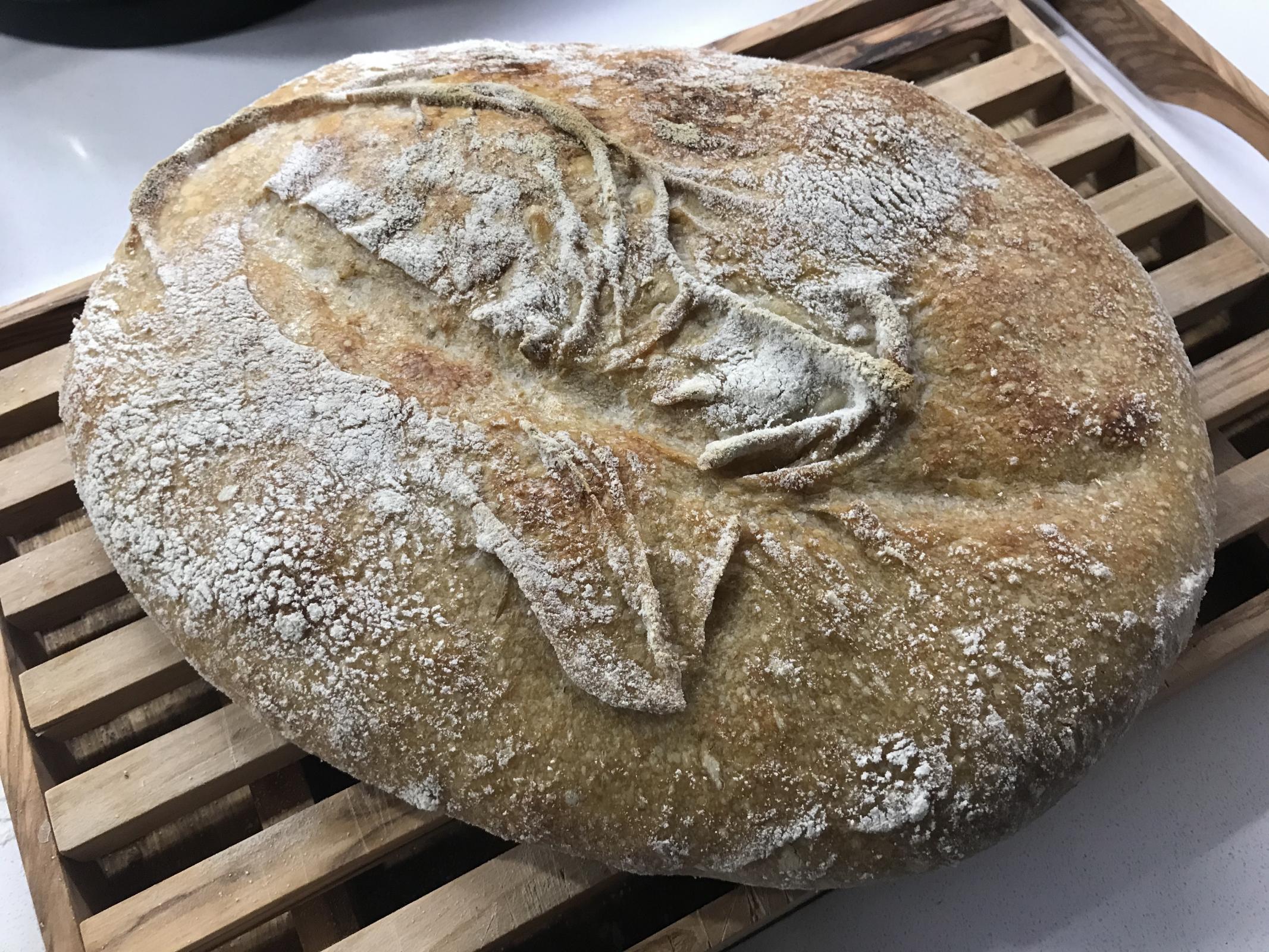 Hi everyone! So I baked my first ever sourdough loaves yesterday following the Tartine method, and it all went a bit pear shaped as you can see from the photos. I would love your advice!

It was a mixture of 900g white wheat and 100g strong whole wheat bread flour at 75% hydration. My starter is a 50/50 mix of the same flours at 100% hydration, and has been doubling in size for several days now and passed the float test a couple of days before the bake.

The leaven also passed the float test and I was getting a nice rise on the bulk fermentation (it was a pretty warm day here yesterday, and I maintained an ambient room temp of about 79-80 F). After shaping I left it for about 4.5 hours on the final rise. This is where I felt pretty uncertain, as it didn't get much rise on it that I could tell but also before baking the poke test showed it might be a bit over proofed.

The real nightmare however started when putting the first loaf into my dutch oven (not pictured) where the dough completely split apart when it stuck pretty hopelessly to the towel. The same happened to the loaf pictured below, but to a lesser degree. Still I think it's fair to say all surface tension was completely shot. Going to use rice flour next time!

Before starting the next round, I wondered if you could tell whether this was over/under proofed based on the crumb? As you can see, pretty dense with some large holes. Could that all have been caused by the tearing from the towel? 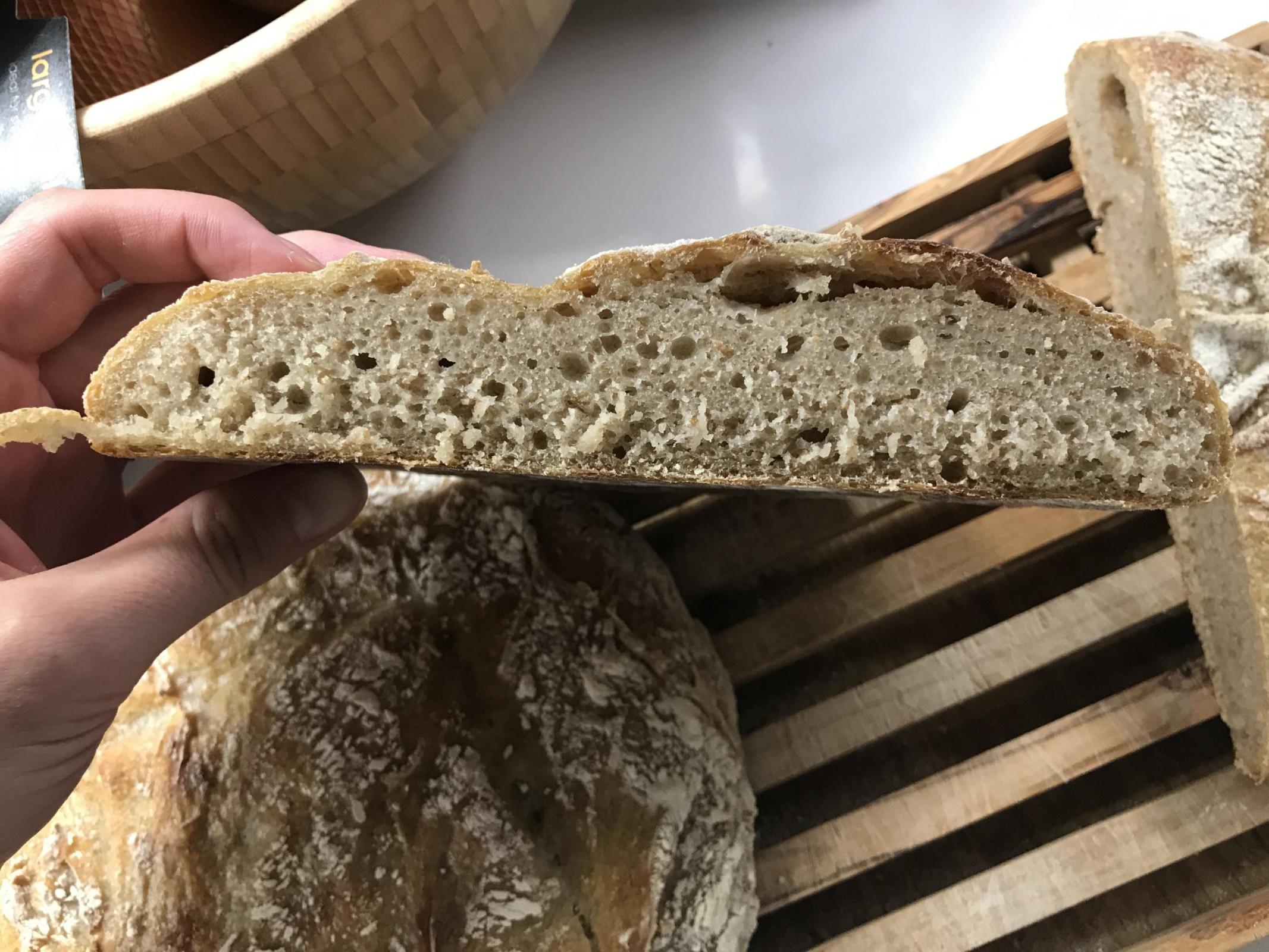 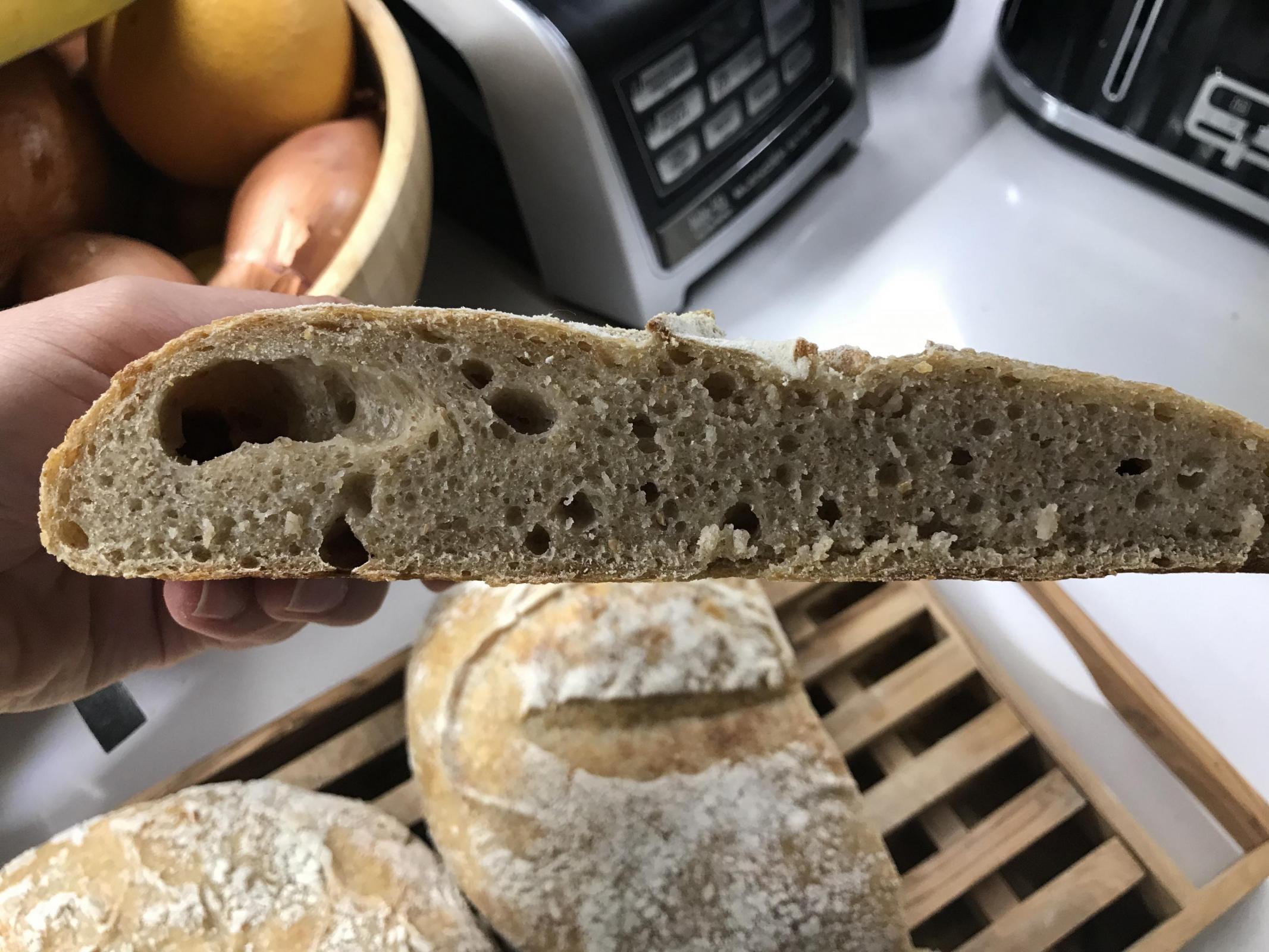 Overproofed for sure but 7also 5% hydration is pretty high for white wheat.

I recommand to start with 65% hydration until you are use to handling the do and then gradually push the hydration further.

That would make a lot of sense. I definitely struggled a bit with the handling/shaping as I'd never worked with a dough that sticky.

Is it odd that I didn't get much of a rise during the final rise then? I wonder if perhaps left it too long during the bulk rise.

How long was your bulk proof and how did you judge it was done and time to move to the next step?

Sourdough that sits around too long can become overly acidic/proteolytic (turning gooey) and then nothing can save it. This may have happened to your dough during the final rise, if your bulk went on too long and the acid and enzymes built up too much. That would explain lack of expansion in your final proof. When the gluten breaks down it can't hold gas so it doesn't expand.

I did the bulk rise for 5 turns which was about 3.5-4 hours. I did the poke test which seemed to come out about right (coming back out slowly but still slightly indented), but perhaps it still was a bit too long! When I did the poke test on the final rise I seemed over proofed, even though it didn't have much of a rise at that point. Based on both of your advice it seems like I might have left it too long on the bulk rise? Maybe the yeast had been exhausted by the time it got to the final rise.

Thanks so much for your help :)

Regarding the hydration: I suggest working up to the tartine method, rather than going all in with that high hydration. It's not an easy dough to handle and the shaping just takes practice. I found building some shaping chops and speed with lower hydration doughs and scaling up to higher hydration worked better (for me at least) than just going whole hog tartine style.