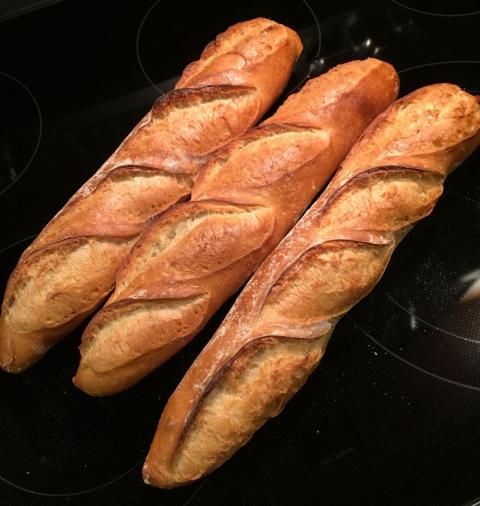 For all the hundreds of baguettes that I’ve made these past 5 plus years, it is a curiosity that I have never made a traditional French baguette.  For the record, as enticing a standard French baguette may be, they are often too unexciting, flavor wise.

They may be a national symbol, akin to the Eiffel Tower and the beret, their place well cemented in the culture.  The best of them carry a bright and sparkling if not forceful flavor, and the rest serve as a landing pad for a sandwich or honored place at the dinner table.

Once I became enamored with the Bouabsa baguette, there was no turning back.  I never looked to create the French baguette.  Until now.  Recently Dan posted a link to some King Arthur videos of isolation baking, including one by Martin Philip that I homed in on.  Here he is creating the french baguette, and thus inspired me to take my own shot at it.

And after 8 bakes, I think that I am finally there, each bake modified slightly in order to create a baguette that meets my standard.  My first bake was a wild goose chase due to the wrong formula link under the video.

I rewatched the video where I saw that the formula being held up to the camera was not the same as the one in the link!  Time to go with bake #2.  And so on, each time trying a little something different.  Until finally I started to piece the puzzle together.  8 bakes in 11 days.  I am decidedly not a natural, but rather one who is often willing to put the time in to figure it out piece by piece.  Usually I get lucky on a first bake, but not here in these uncharted waters.  And not dissimilar to my multiple consecutive bakes in search of an acceptable pan de cristal.

One problem I had was that I was pussy-footing around the shaping phase too much.  Trying to be gentle with this soft and pliable dough, I was not creating the appropriate surface tension.  But that began to resolve on bakes 7 & 8 after another video review of Mr. Philip’s shaping technique.

Here is the BBGA formula based on the KA recipe page... Note that I accidentally excluded the addition of the salt at mix time!

Highlighted are a few notes on each and the progression.  Only changes from previous run are noted. 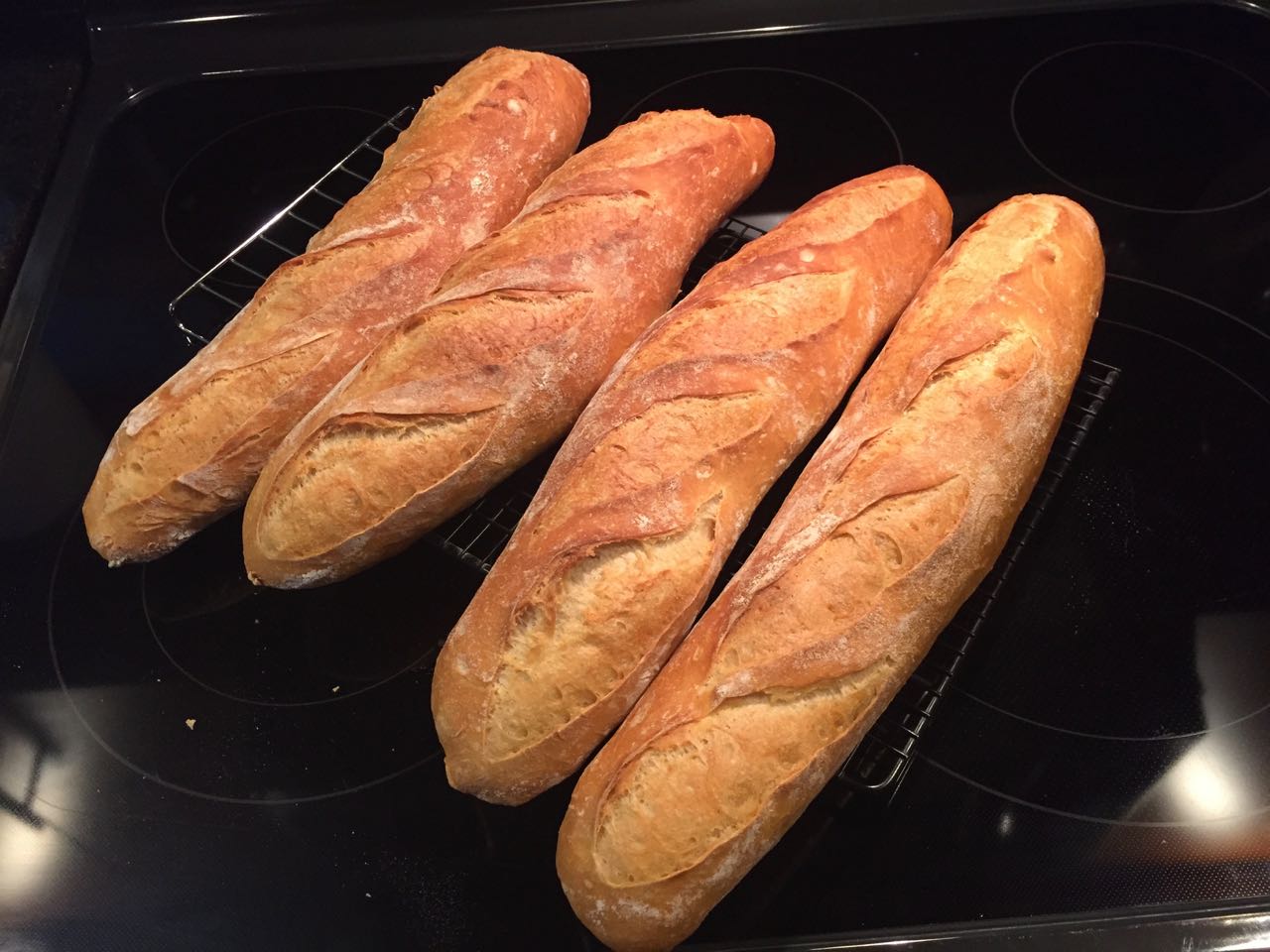 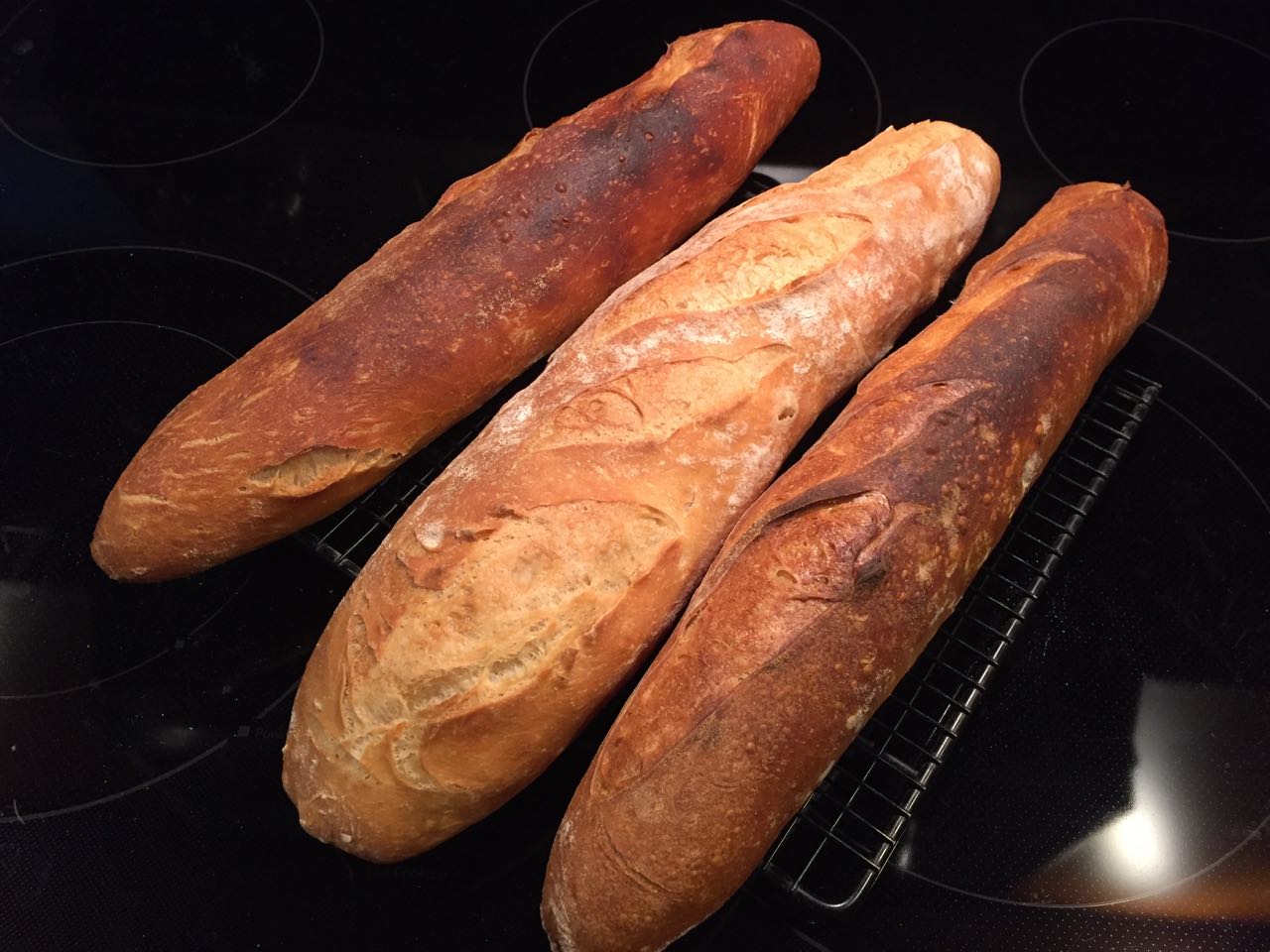 Bake #3:  23% AP/Rye poolish, 80 min BF, 460dF oven.  Improved everything - but got away from basic formula with addition of rye flour in poolish.  First good scoring. 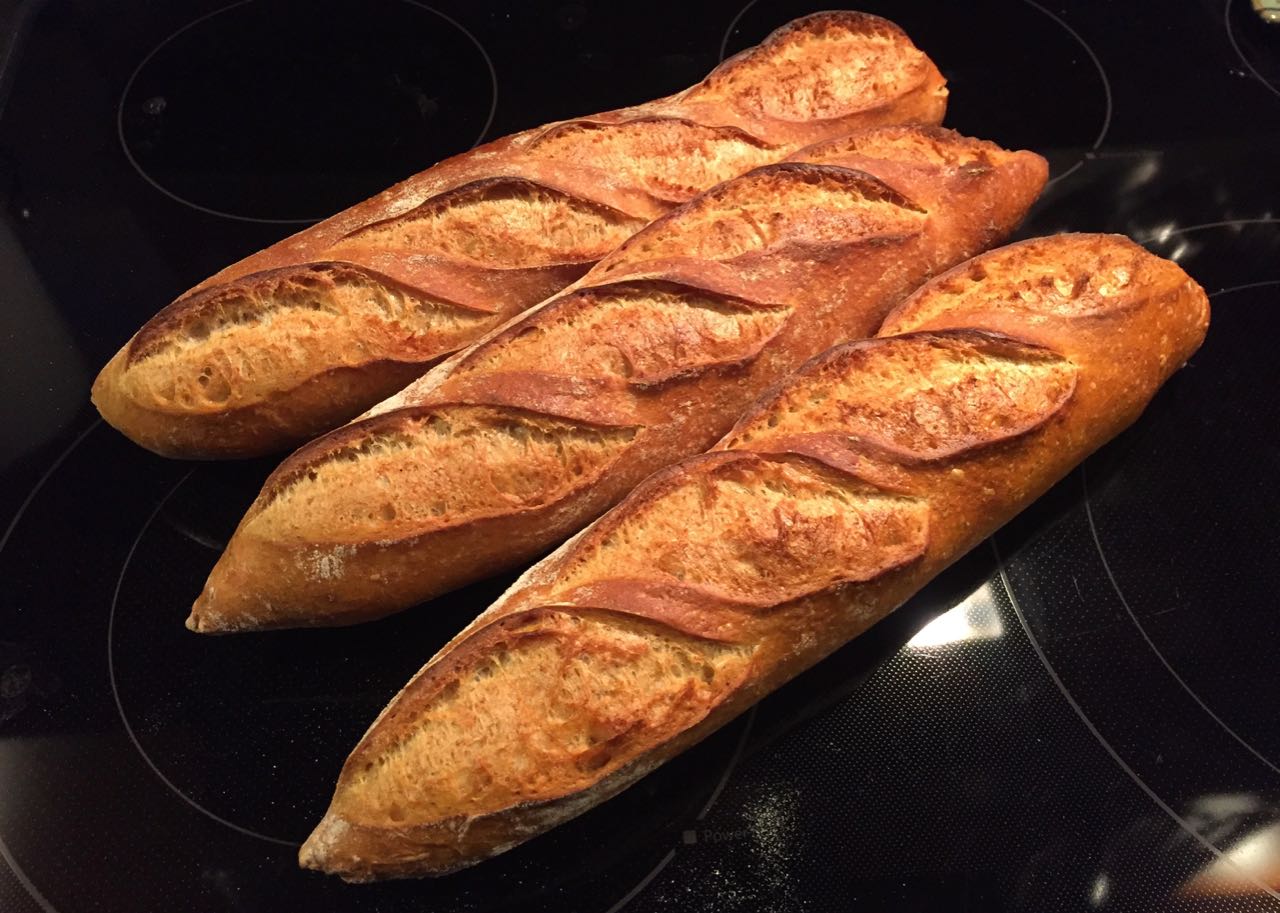 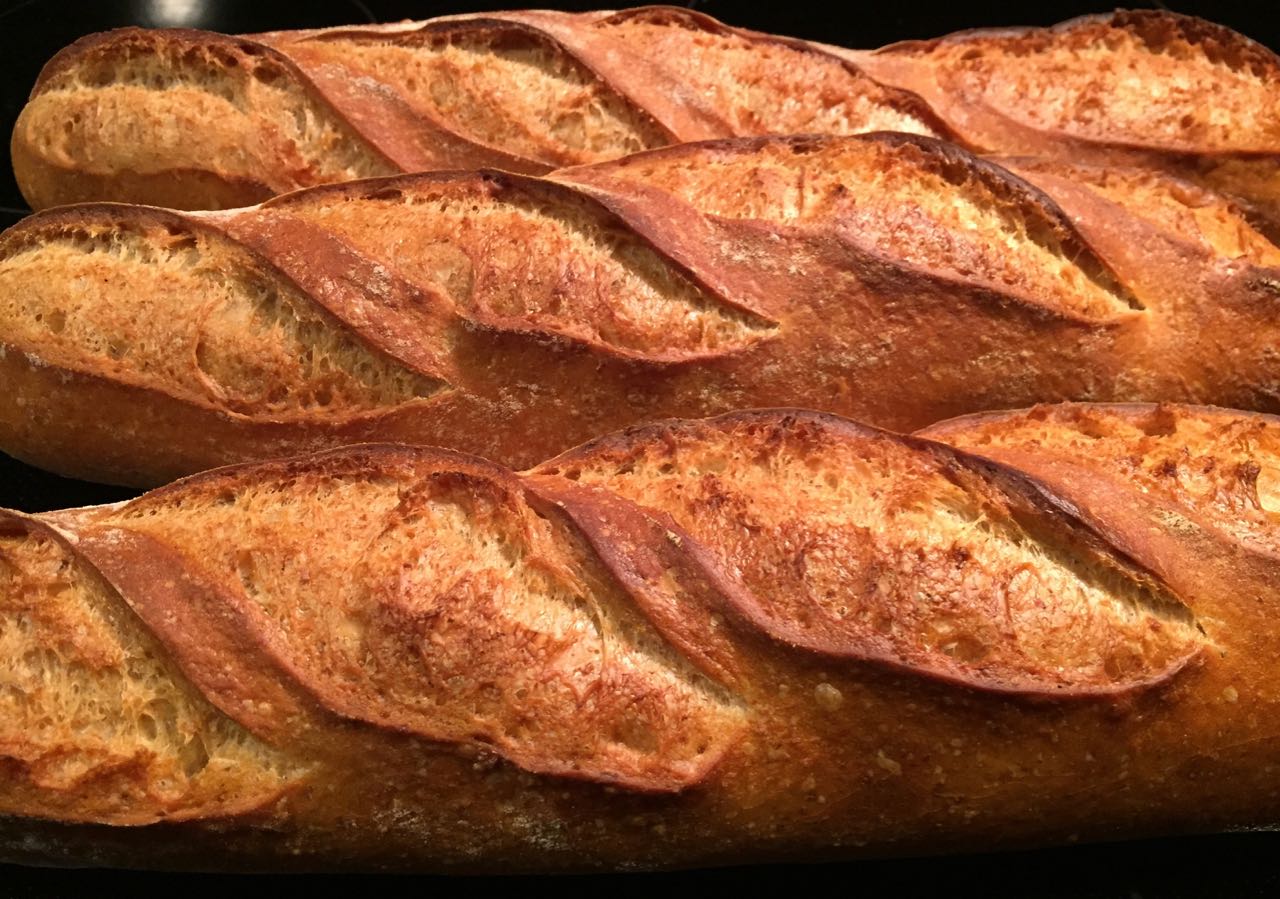 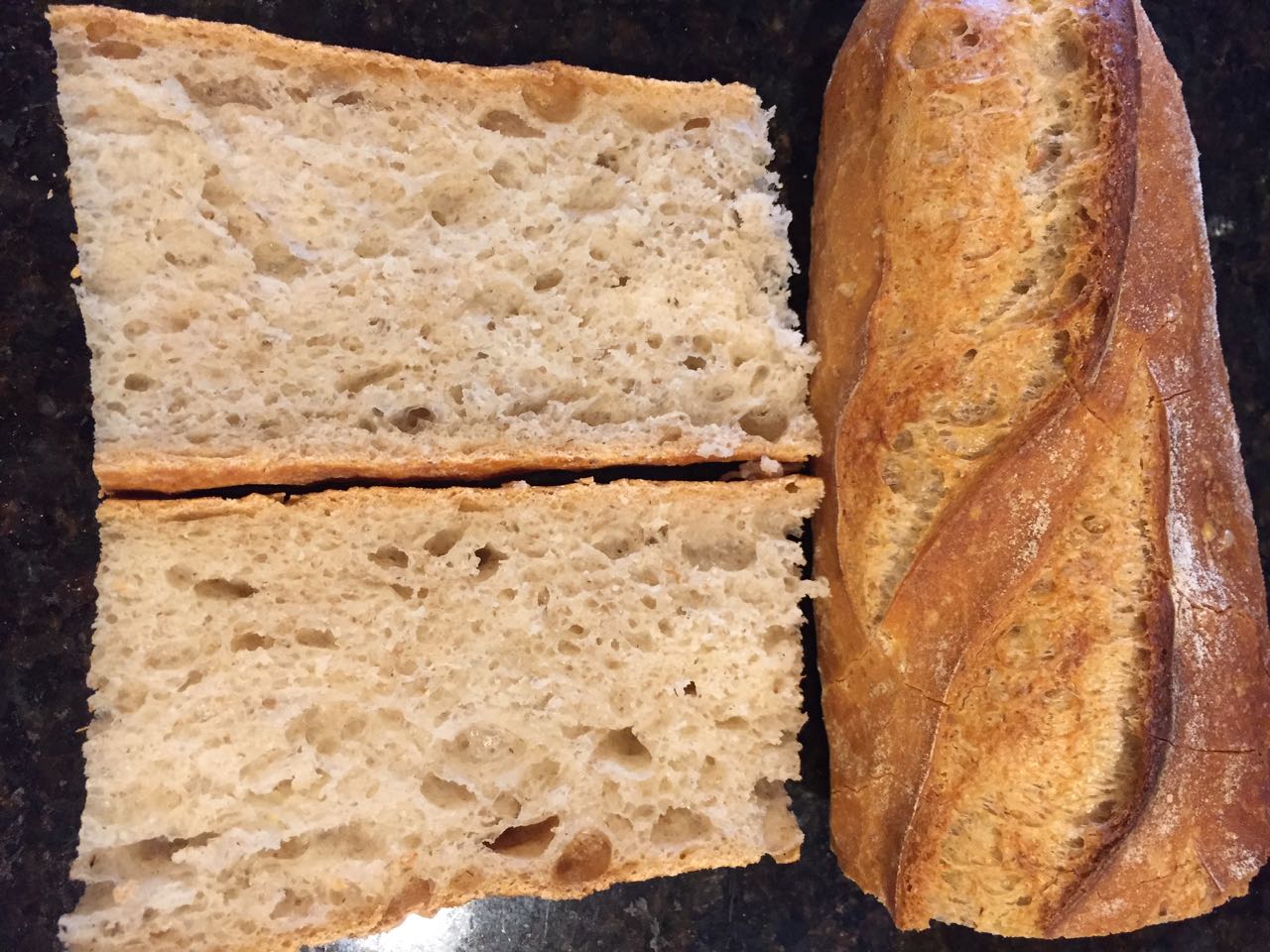 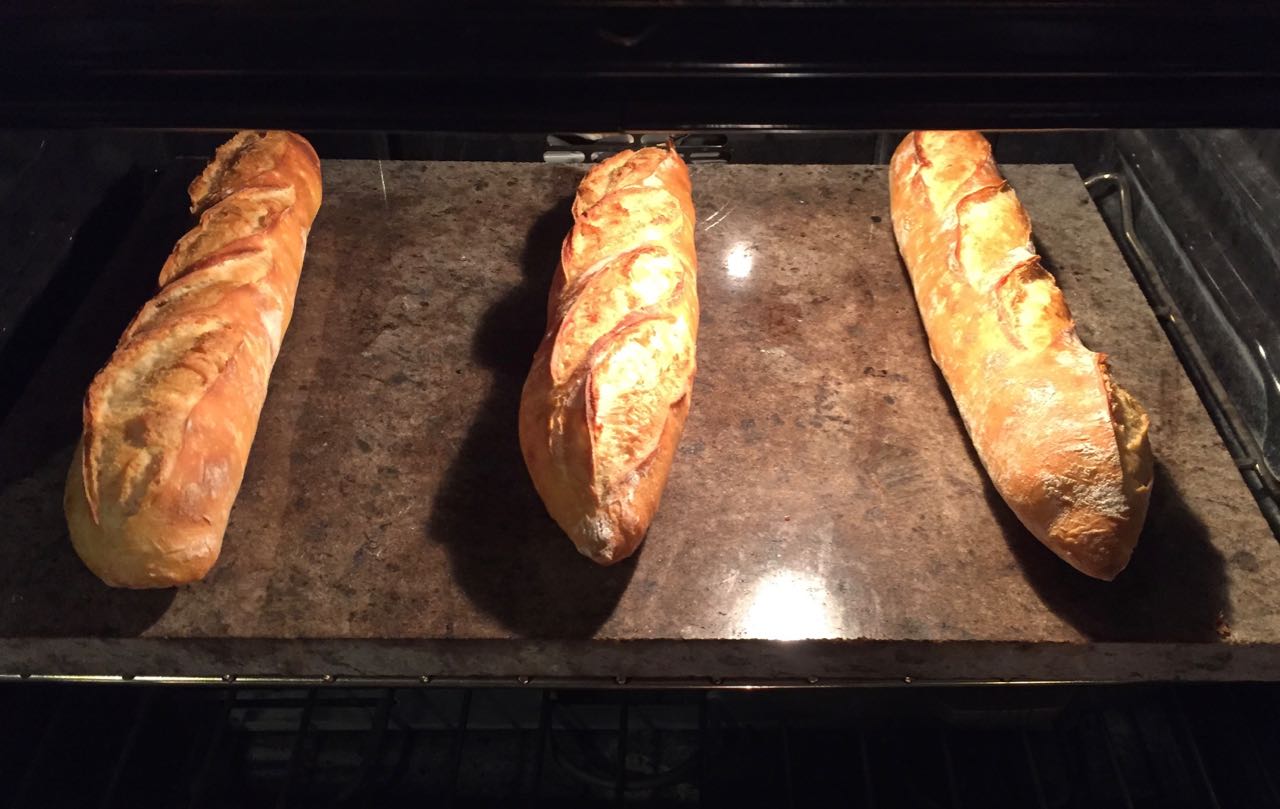 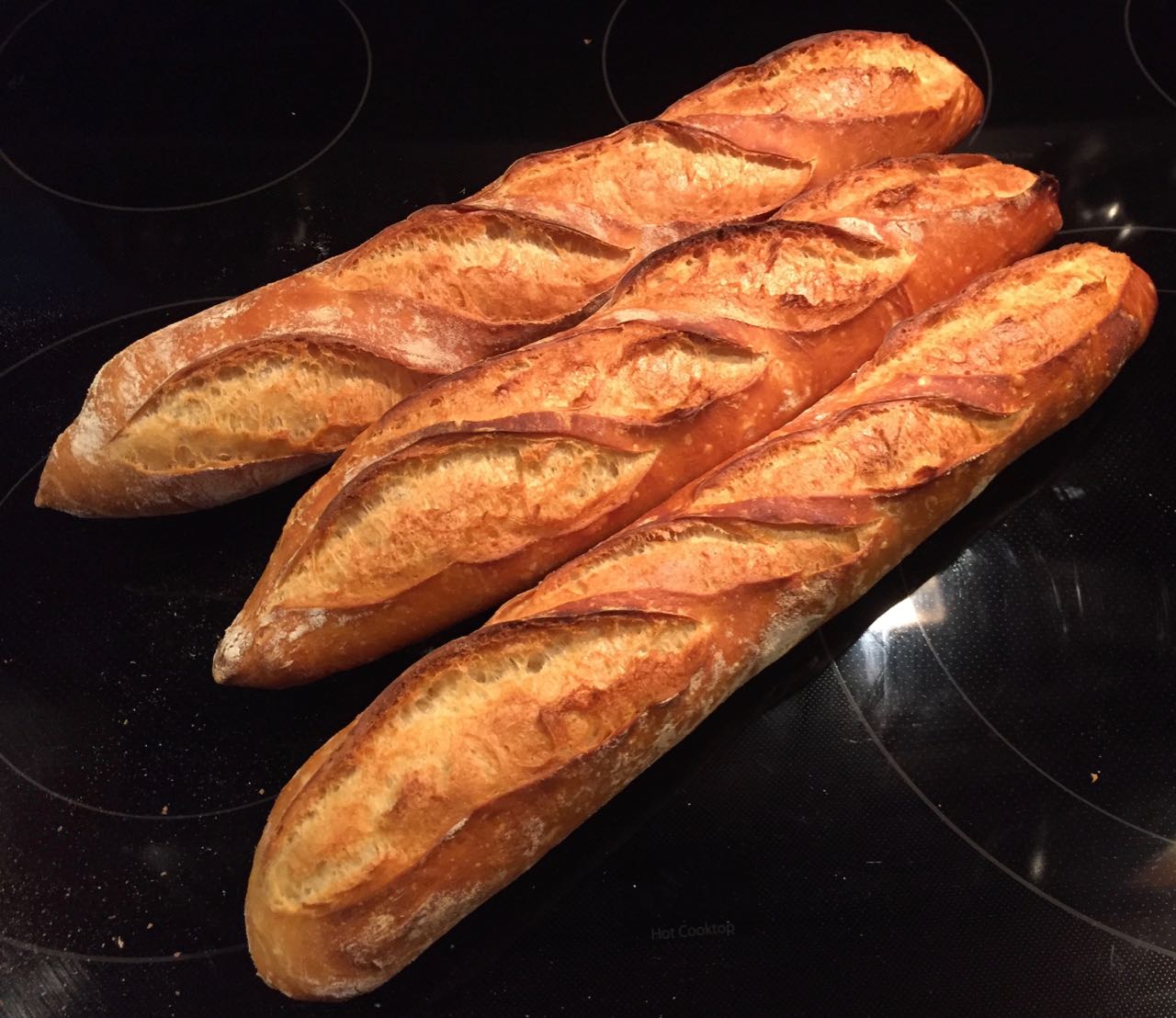 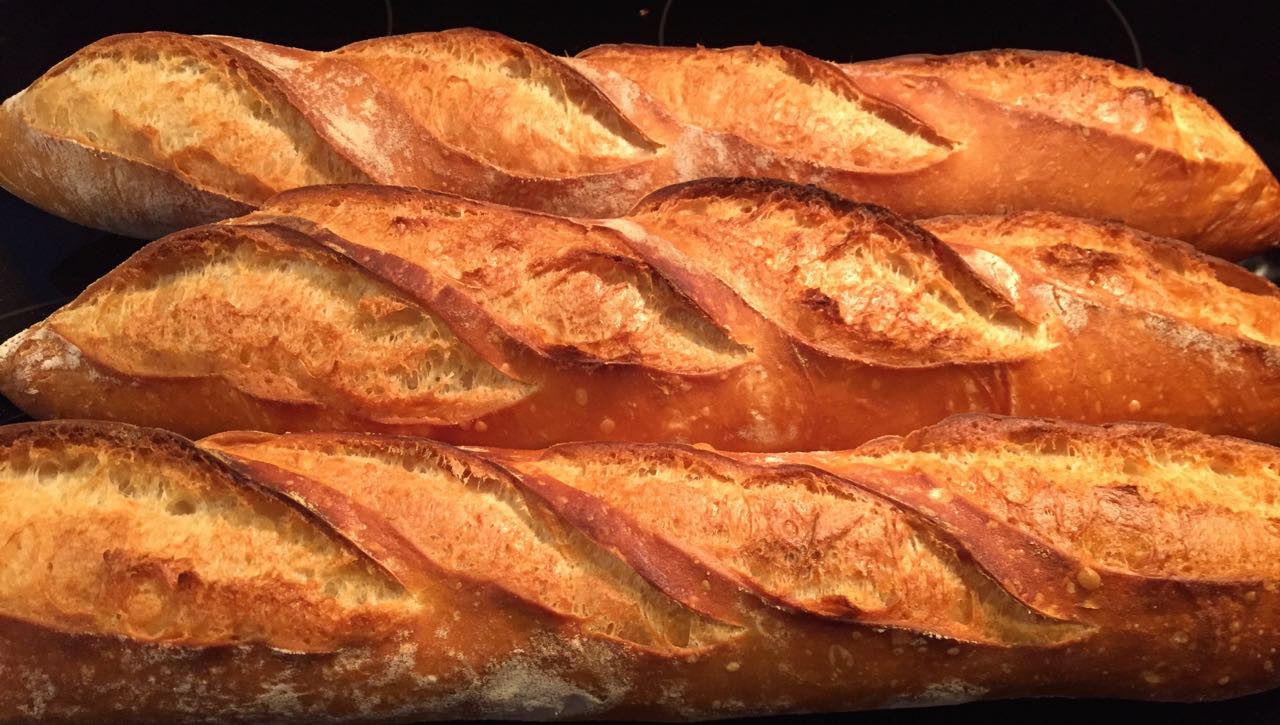 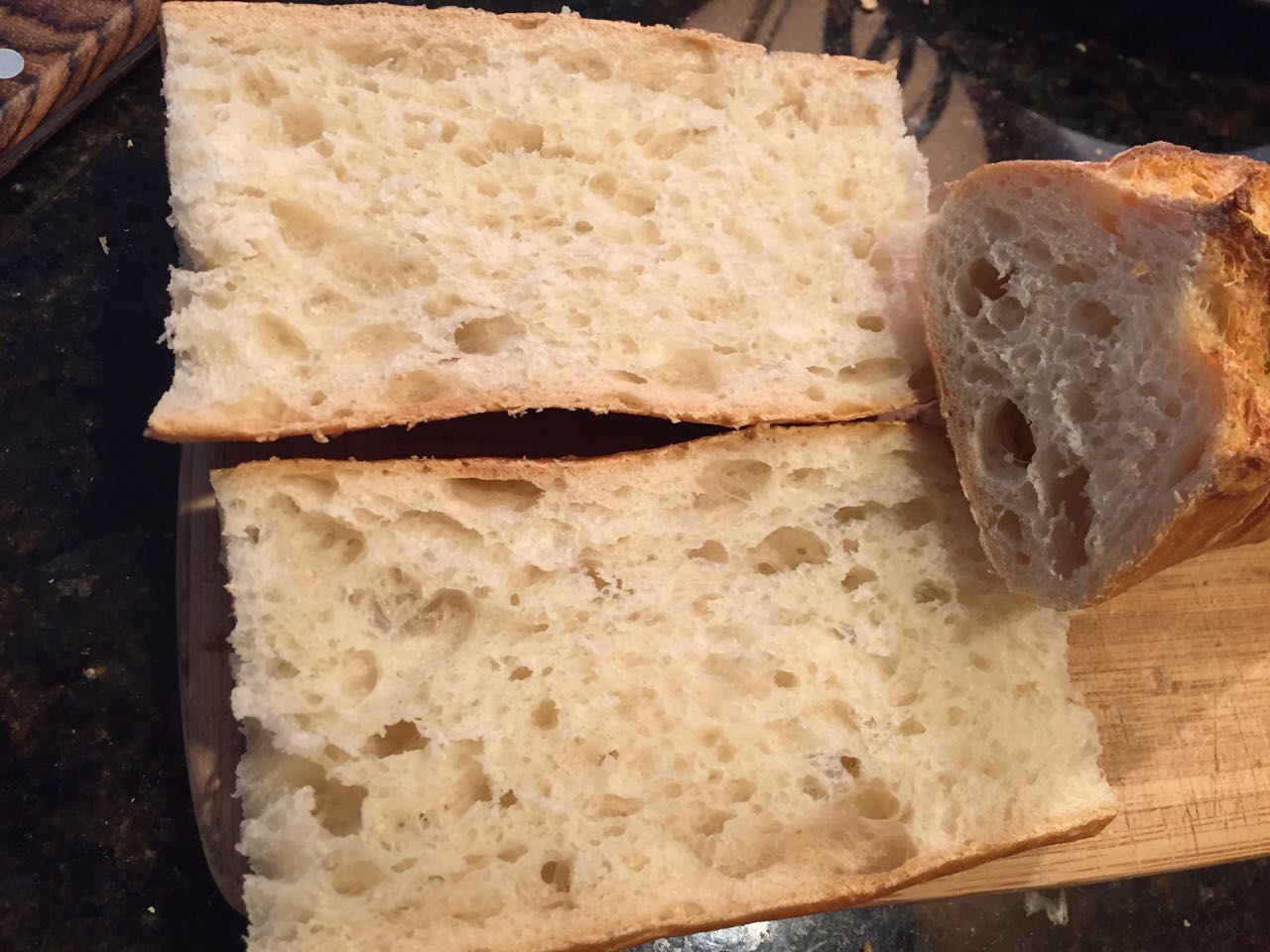 Bake #5. 50% AP poolish, sticky mix due to amount of liquid preferment, back to log pre-shape, rolled in flour before couche, reverted back to less impressive scoring.  I though the increased preferment would improve flavor.  Not really. 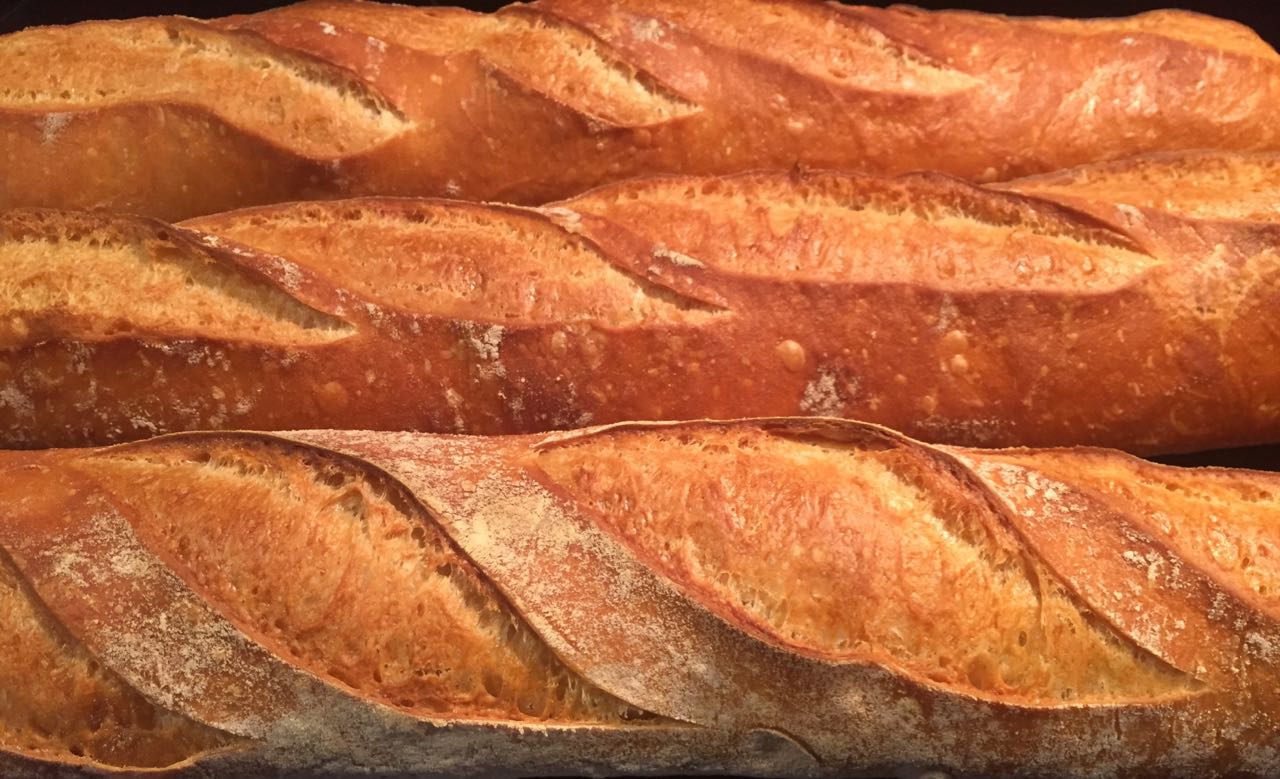 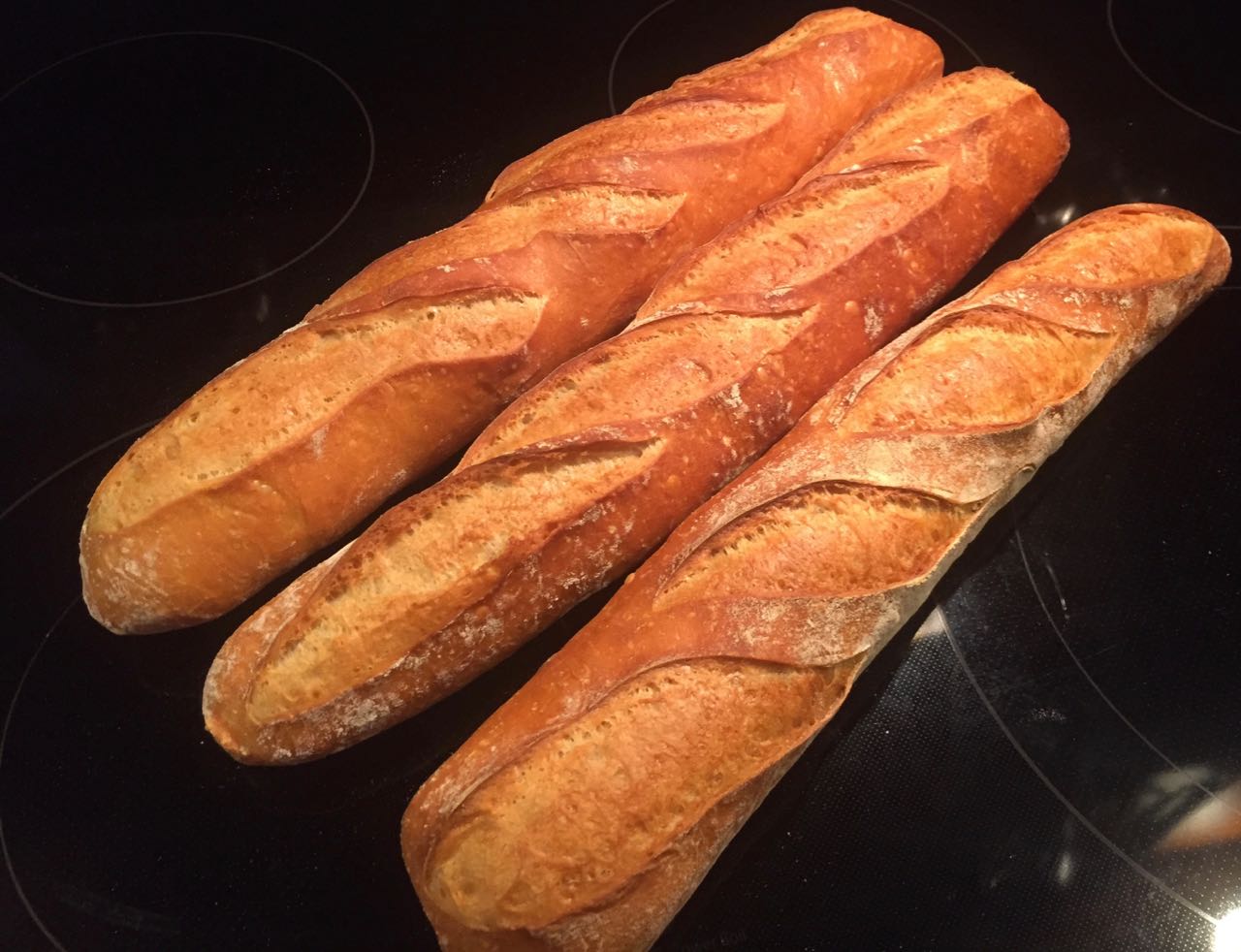 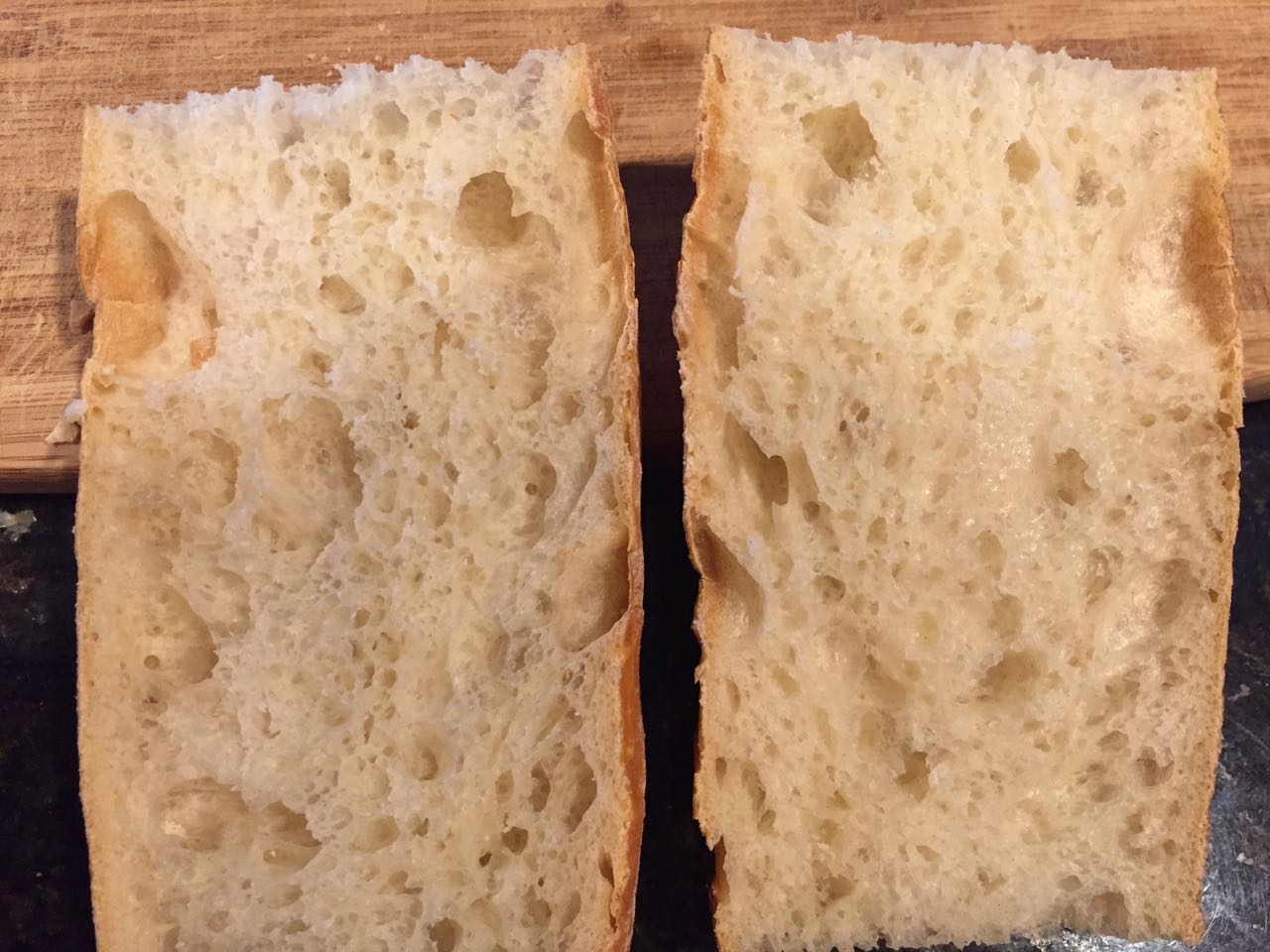 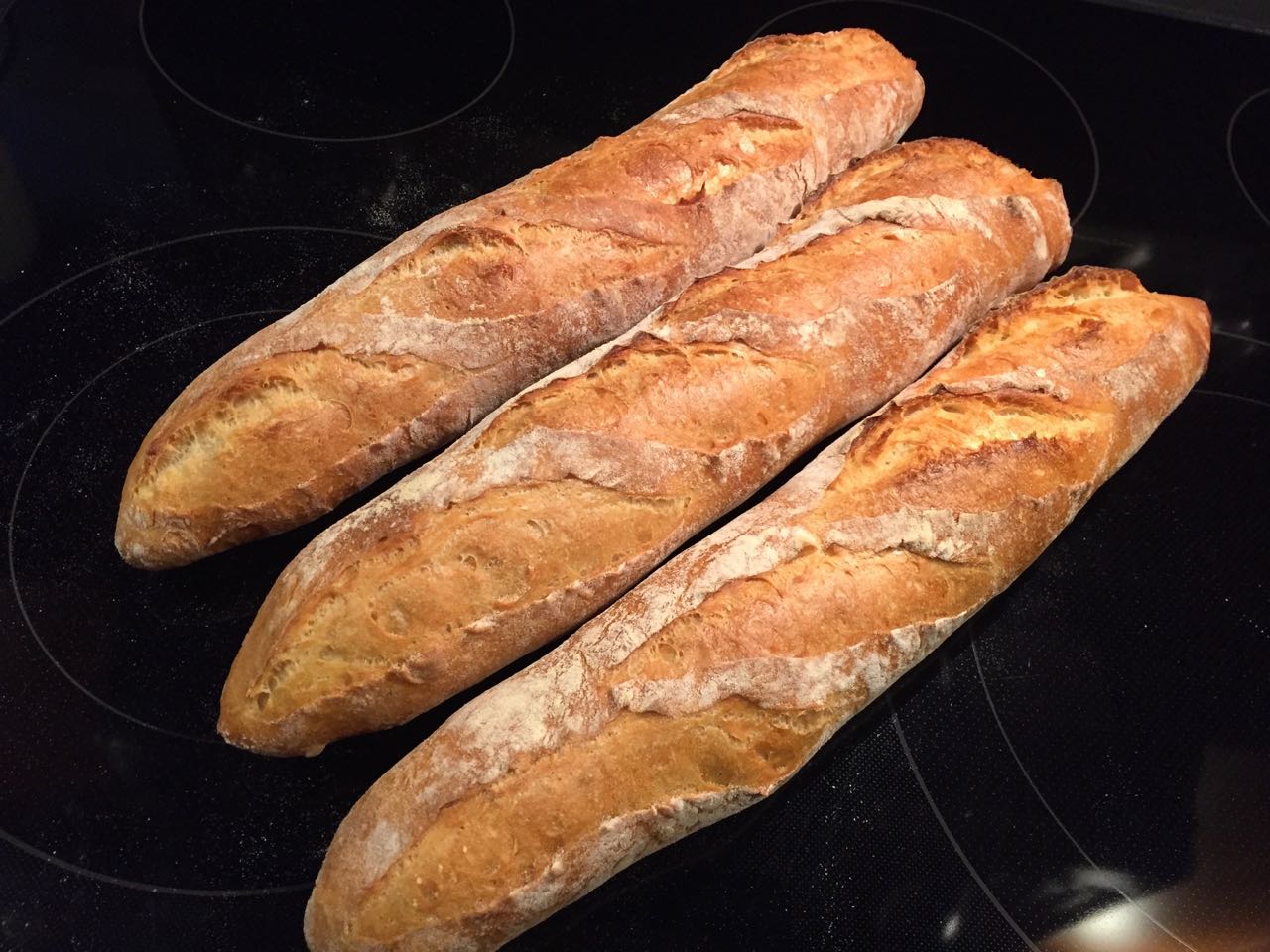 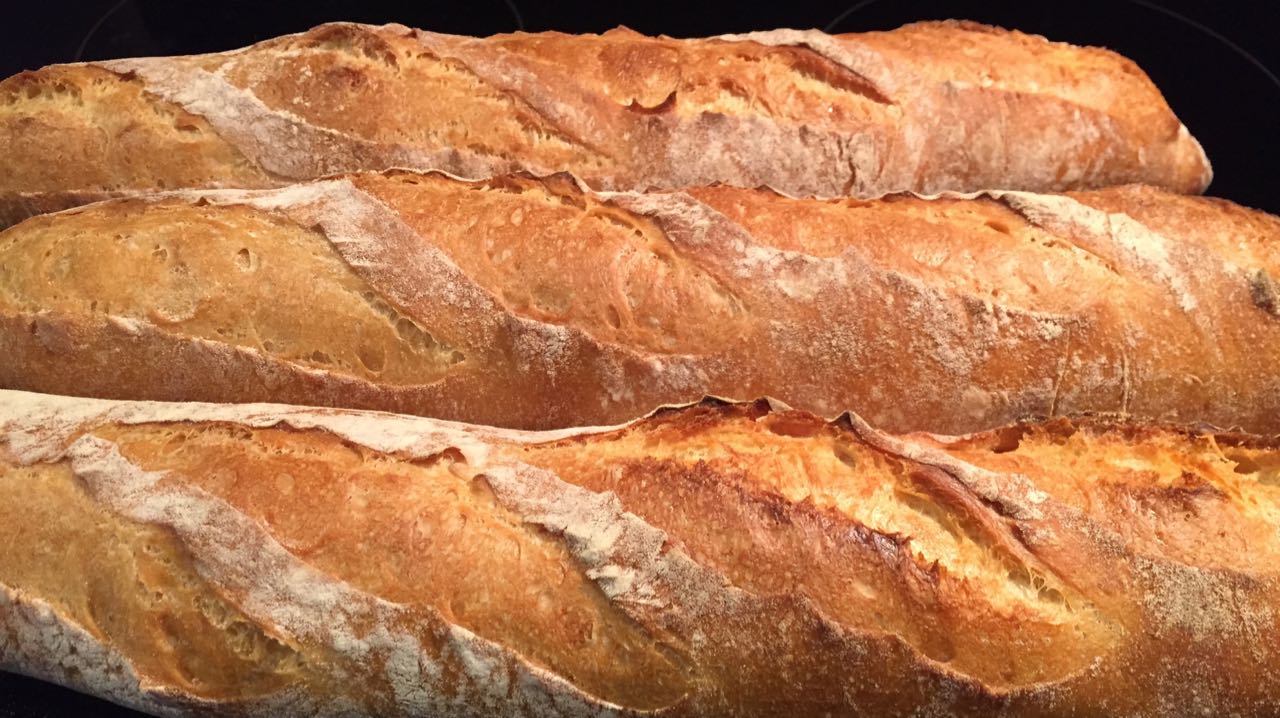 Bake #7.  Improvement over #6 due mostly to familiarity of process and dough handling, more aggressive shaping to force better surface tension, 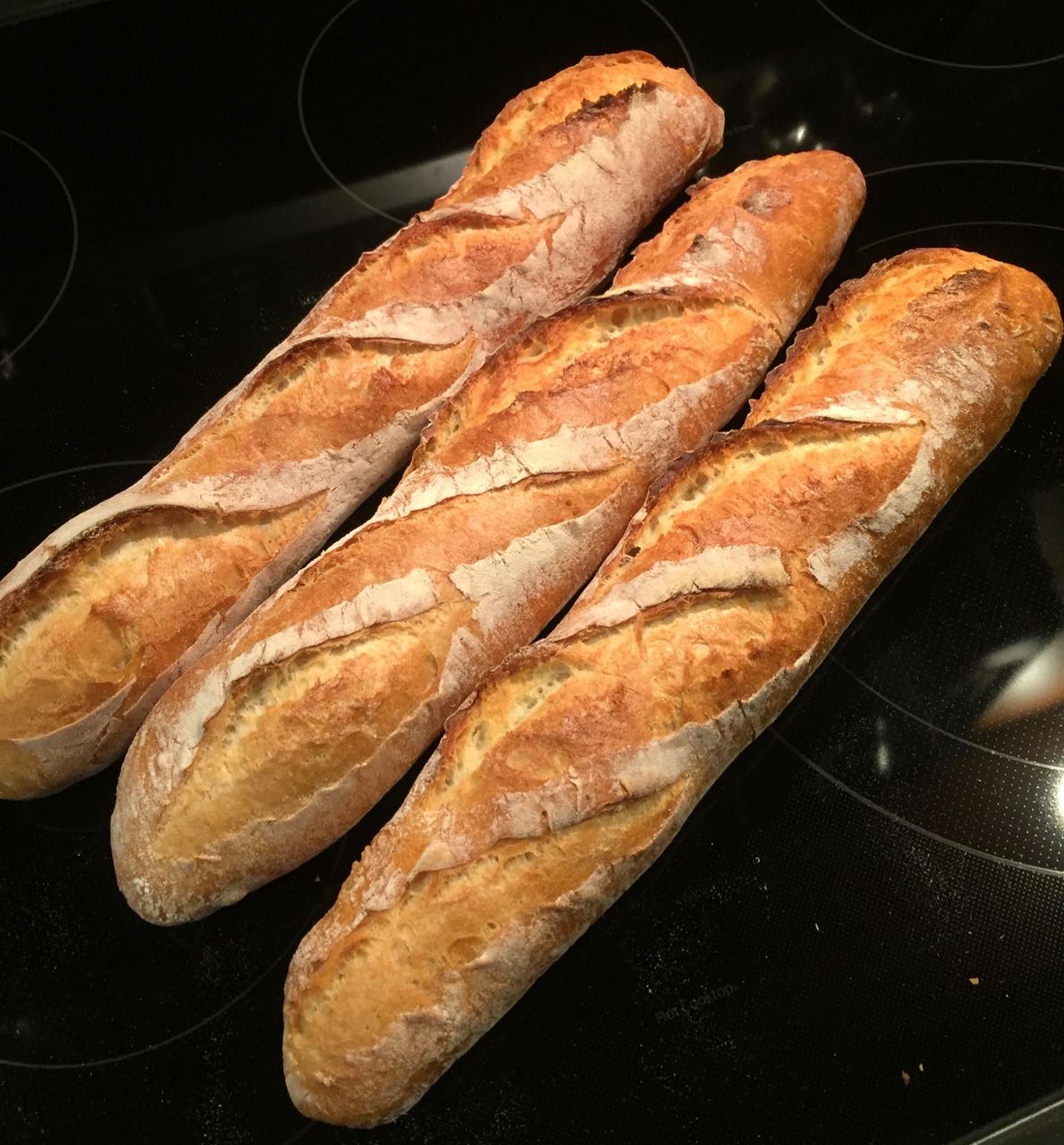 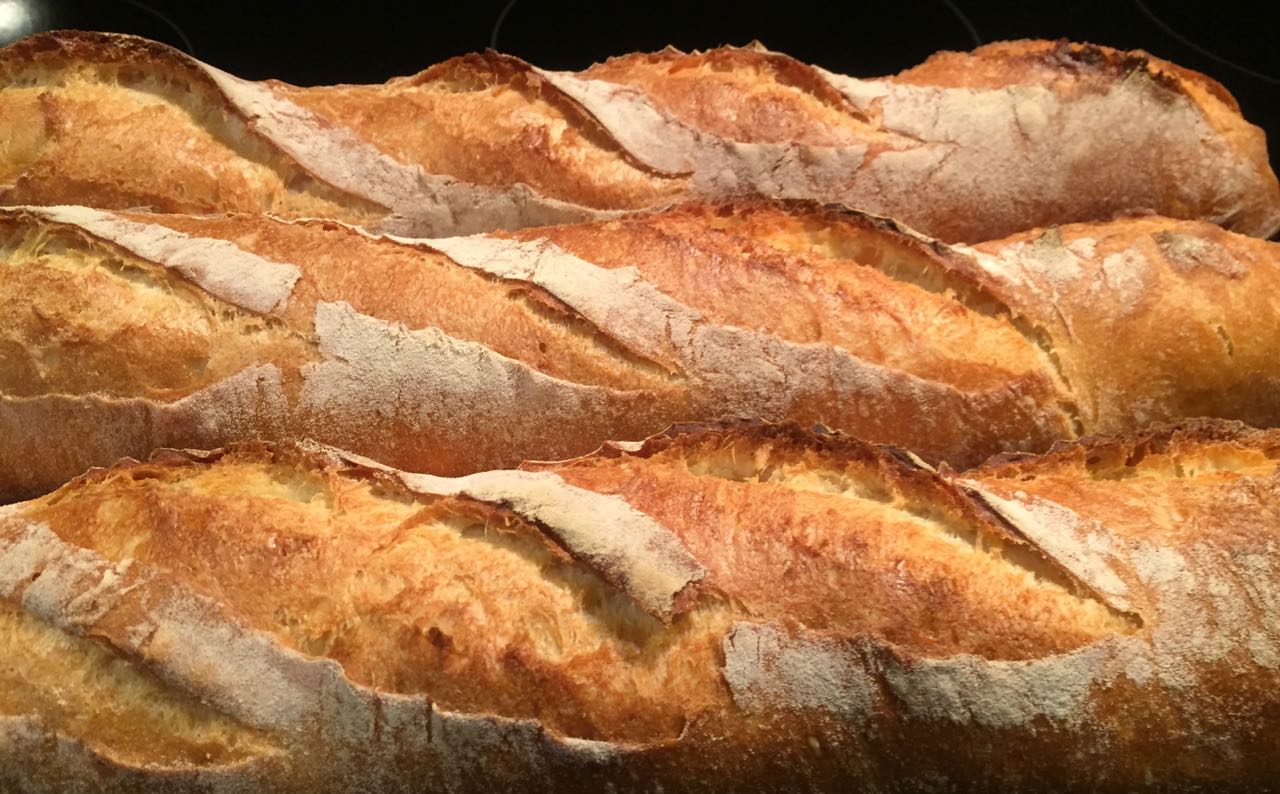 Bake #8.  putting it all together!  Short log pre-shape, retard for 4 hrs.  Still not as open a crumb as expected, but flavor has now improved significantly over original bake. 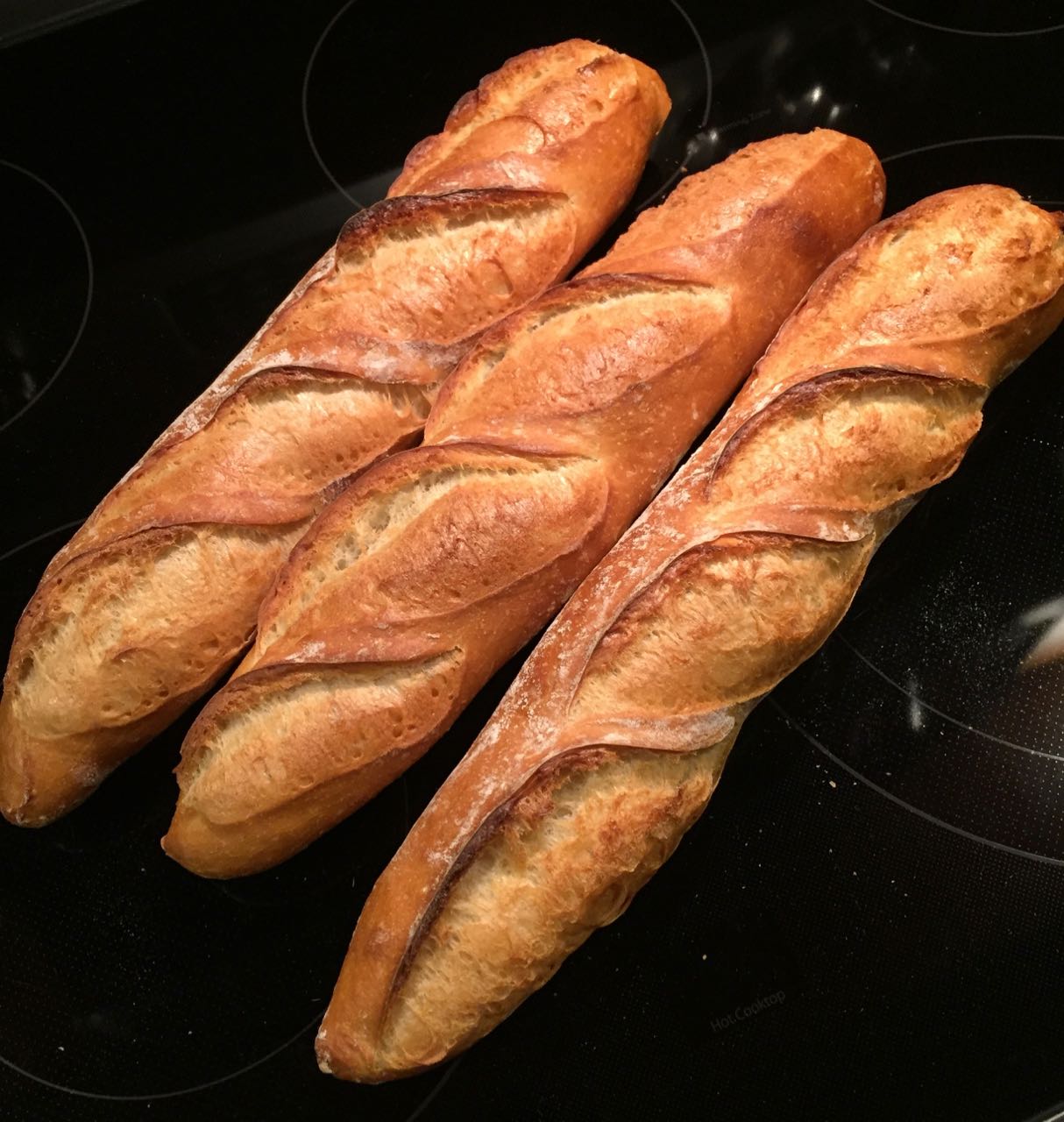 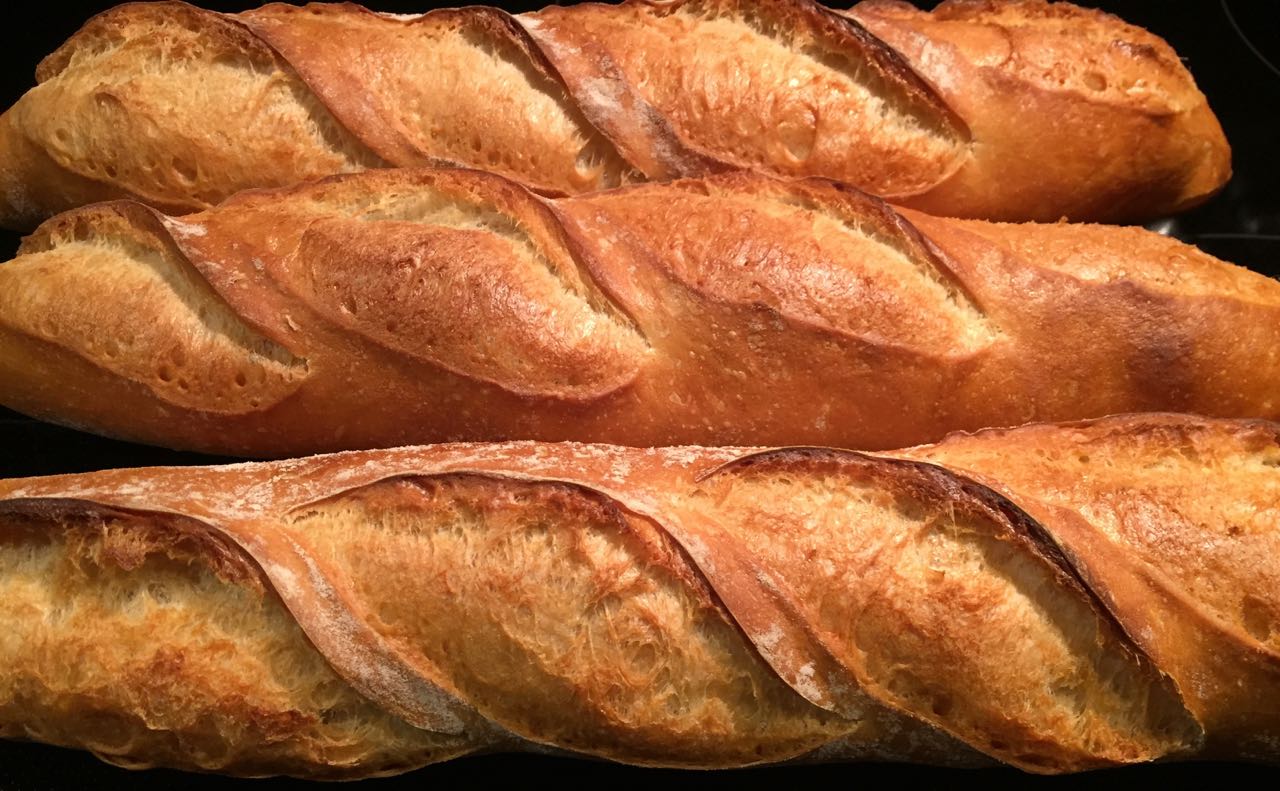 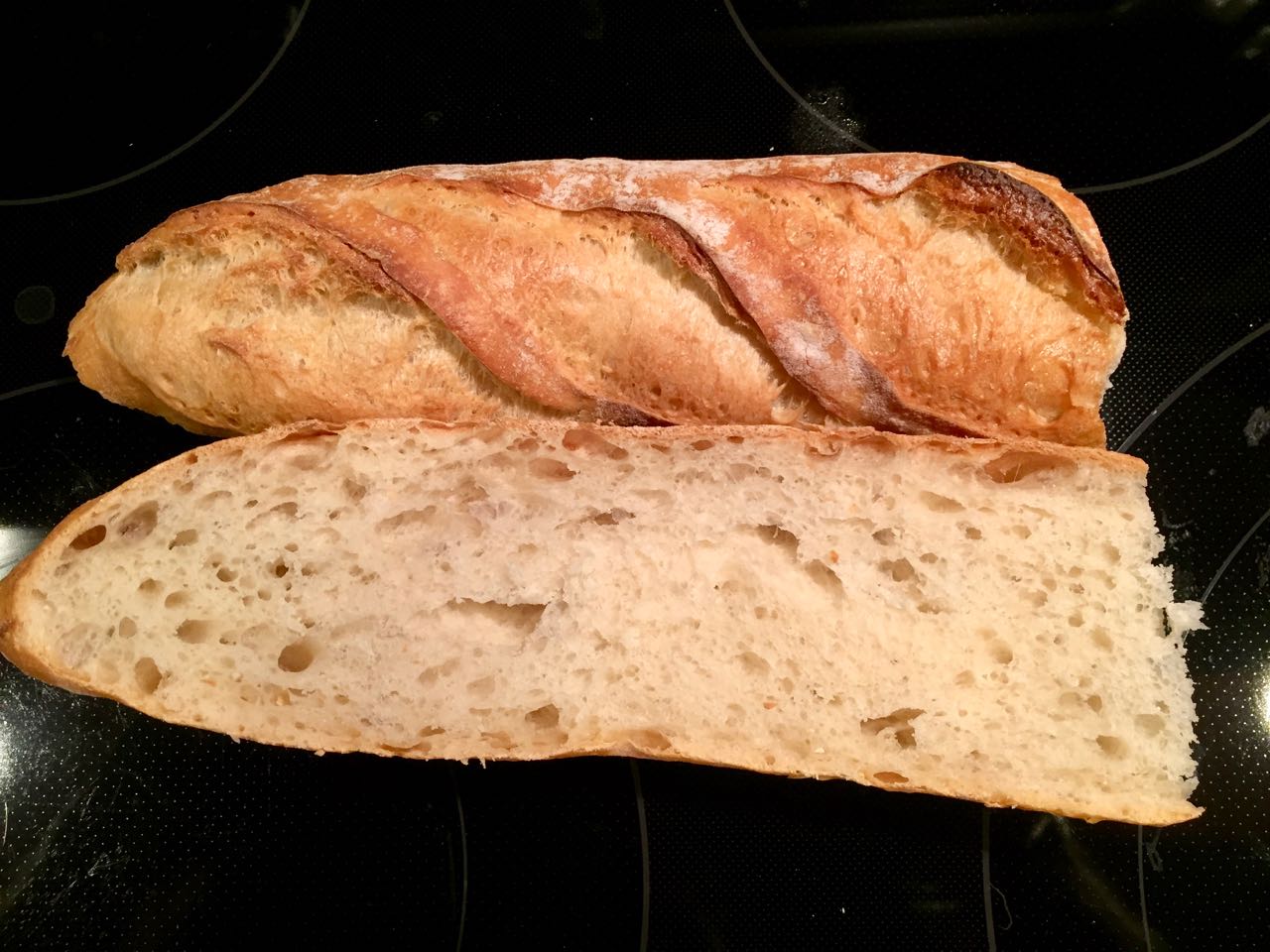 This is what happens when the wife wants to see if we could vacuum seal a baguette to "keep it fresh longer".  Don't try this at home kids! 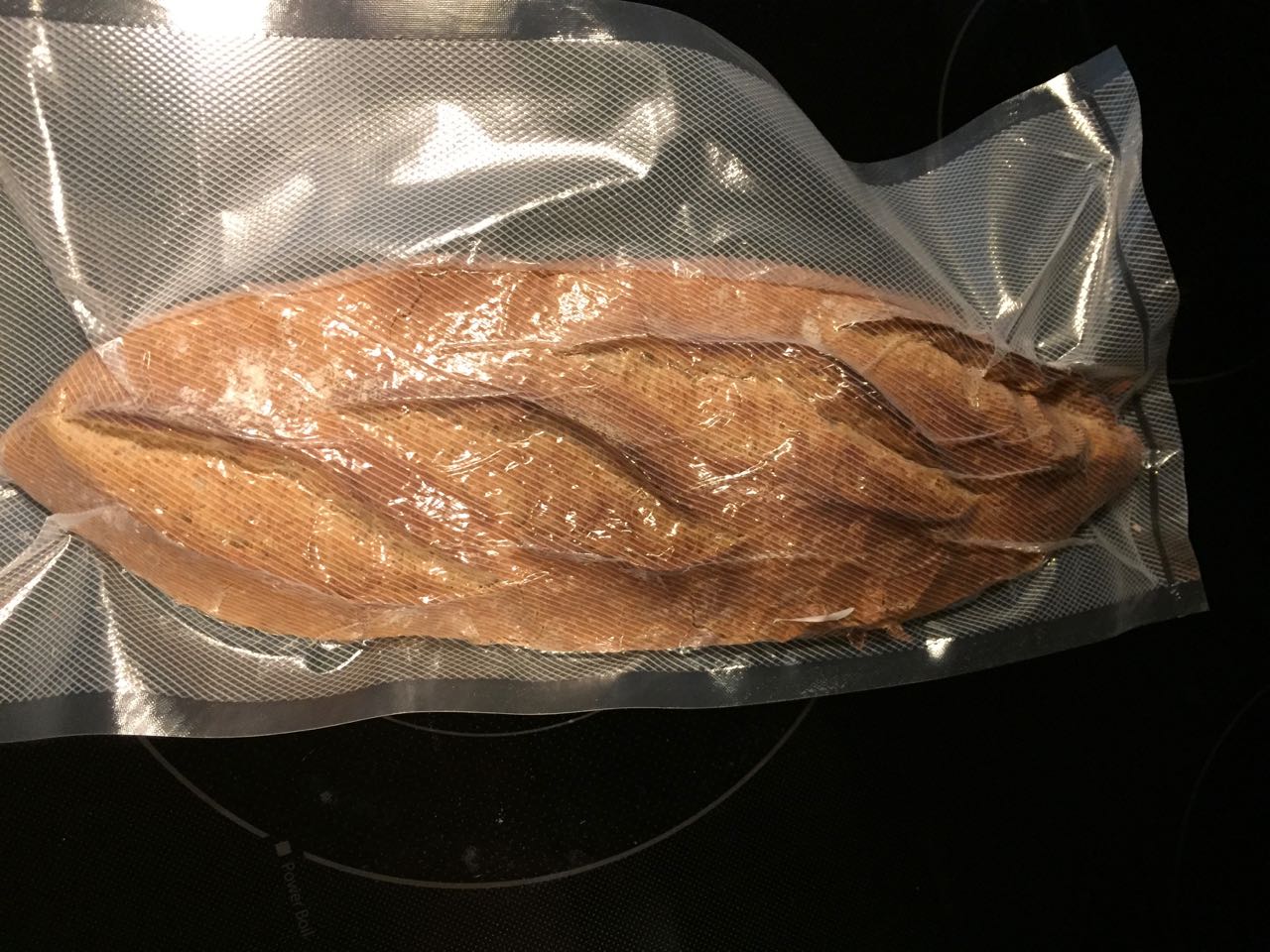 A great and informative post!  I haven't done baguettes in a while, but this gives me a nudge to give them another go.  One question I had......when you are retarding the dough on the couche, do you have the whole shebang in a plastic bag, or does the couche keep things from drying out too much in the fridge?  In my previous baguette bakes, I have never retarded the dough, so wanted to understand how you are doing that part of it.

Thanks for the formula, and some of the details on how you got there through your 8 evolutions.  I'll give that video a couple of looks, too.

My couche is long enough that it doubles over the dough forming its own covering.  When retarding the dough I place the couche into a plastic bag and try to seal it up by folding under the open end.  The inside of the bag always picks up some droplets moisture that the dough sheds and I don't want any refrigerator odors to taint the dough.  The long retard has a tendency to cause the couche to wick away more moisture from the dough than just counter proofing.  You may wish to take this into consideration and perhaps adjust the amount of flour that you place on the couche.  Retard time is typically from 12 to 16 hours, with a dough like the Bouabsa extending that to 20 or more hours.

When I countertop proof, I still use the extra linen on the couche to cover the dough, and then I place a light towel over it all.

One note - is that the couche itself rests inside of, and is supported by, a jelly roll pan.  The pan length conforms to my baking deck length.

Just the details I was looking for, Alan.  Thank you!

Have you tried freezing the bread first, then vacuum sealing? That will prevent crushing. Pretty sure Whole Foods par-bakes and freezes whole, then shipped to local stores. I’ve had their par-baked breads and fine them very good.

The self-described dog with a bone.  That would be you.  I think that Steve B. from Bread Cetera was a persistent sort too, and we likely have a fair number roaming around Isle TFL also.  When kendalm was first trying to get his act together, he was pretty relentless too.  I have my moments, but when I'm used to getting it "right", I get a bit perturbed when I can't quite figure it out up front.  Hence, what you call persistence, to me is that nagging feeling to get it right.  I suppose six of one, half a dozen of the other.

I like the idea of freezing the bread first, so I'll give that a try.

A wealth of information. It's both helpful and inspiring to see a whole progression like this when one is trying to get to grips with the elusive baguette!

Edit: I should also add that the presence of the child in the video with Martin is both unusual and helpful. One rarely gets to see someone making mistakes in shaping rather than just demonstrating good technique, but it is important to know what not to do as well as what one should do.

as long as we/I can analyze what might have gone wrong and then take steps attempting to correct it.

Just this morning I counted up how many baguettes were "harmed" in the process.  (6x3) + (2x4) across the 8 bakes.  At least most were consumed and few hit the refuse bin. And I have a few still occupying space in my freezer.

Trying not to be pedantic, and not that I'd ever compare myself with the great Thomas Edison, except to say that I buy his company's light bulbs.  But here are three quotes of his that seem to fit the bill...

The second reminds me of my programming years.  As the day came to a close I almost always opt for "just one more compile" before leaving.  Sometimes two or three.  Or...

Which isn't to say that I always abide by these, but it does give a good reference point.  As well as the old trope "Rome wasn't built in a day".

I bake for fun, entertainment, and of course, eating good bread.  If I'm no longer having fun, then it would become just another sad chore to be avoided or discontinued.

The latest ones are real beauties. You have been busy! Nose to the grindstone. I saw the Martin Phillips baguette show. Lots of good tips but I was hoping to see him cut into a few of them to show the crumb. I have not had much success with the poolish method for getting an open crumb. Typically when I try a new recipe it works the first time and then I struggle to repeat the success. Just my nature to mess with success.
One of the reasons that baguettes ? are difficult and others are hesitant to attempt is because the little mistakes are magnified and all stages have to go well.

Taste is an elusive thing. Probably more about the flour than the recipe. A good looking baguette will always taste better than an ugly one to me.

Coming from an IT background it was common knowledge, if not actually implemented due to various external factors which led to cutting corners - grr.  The later in the process that an errors is discovered, the harder, and in business - more costly, it becomes to back out or correct.  As a matter of record, both kendalm and I have made that same exchange a few years ago.  If for no other reason than to ogle his formidable skills, the exchange exists in this post.

I'm not much of a fan of getting the rustic look on the surface by rolling the dough in flour before couche, but that was Mr. Philip's approach, and I was there to hone the skill, so why not.  It is undeniable that they have a certain appeal, just not when it comes out as a pile of flour with a little dough tucked underneath!

Wonderfully detailed write up that will help many on their quest to baguette perfection Alan.

Benny.  You should get over the hump and join the brigade.

I’m going to have to jump on the bandwagon eventually.  I still have a few more bakes to do with sourdough batards  first though, I’m still working on my consistency and need to consolidate my skills and knowledge, then I’ll move on to baguettes Alan.