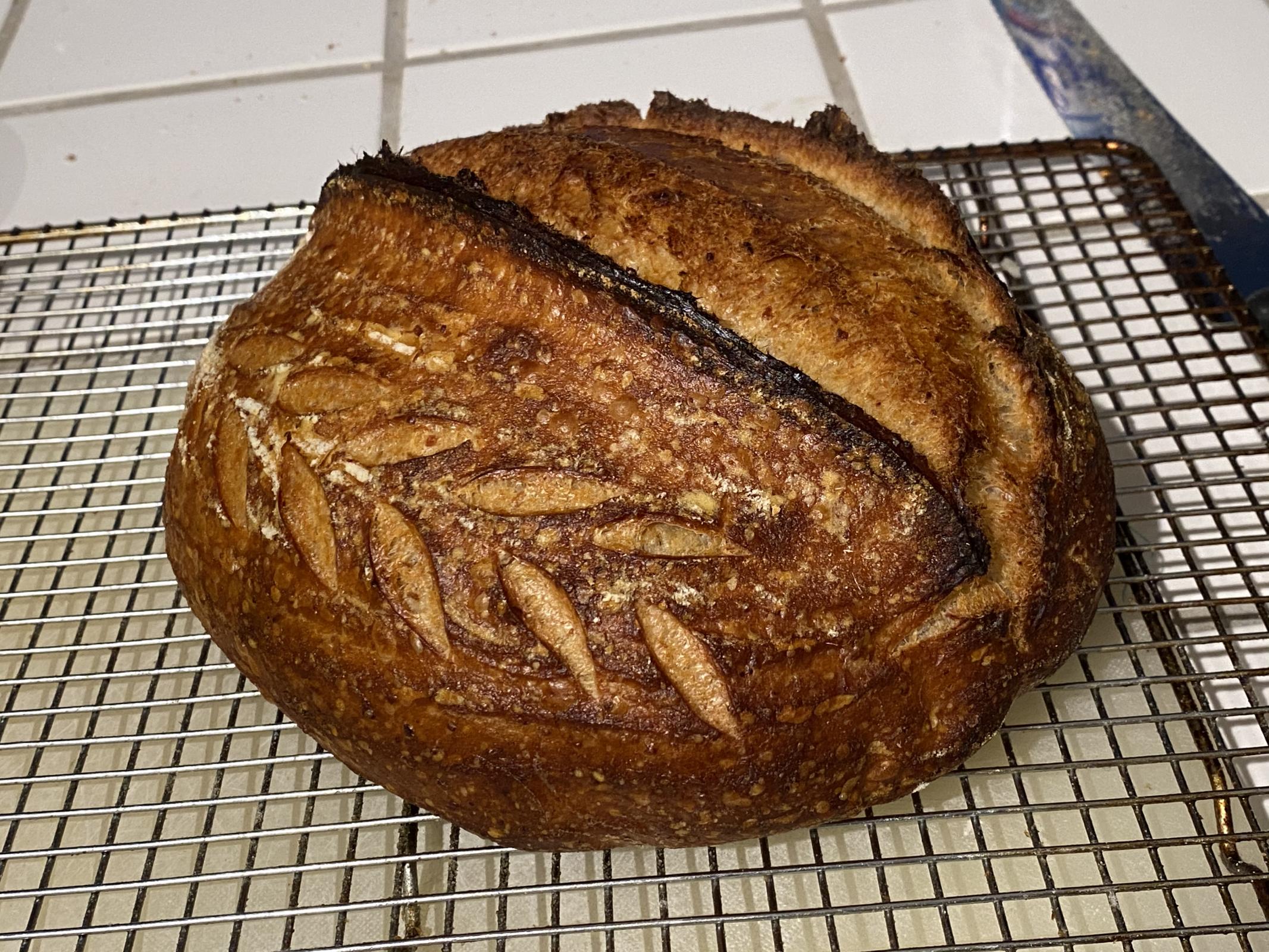 I just wanted to let you all know about putting ice cubes in the dutch oven with the dough. I'm getting the most gorgeous shiny crusts (more than I've ever gotten before) by tossing in a few ice cubes with the bread.

Hadn't seen people talk about this a lot, so I wanted to share! (Now I wish I could keep steam in my gas oven so that I didn't have to use my Dutch oven, but I'll take what I can get) 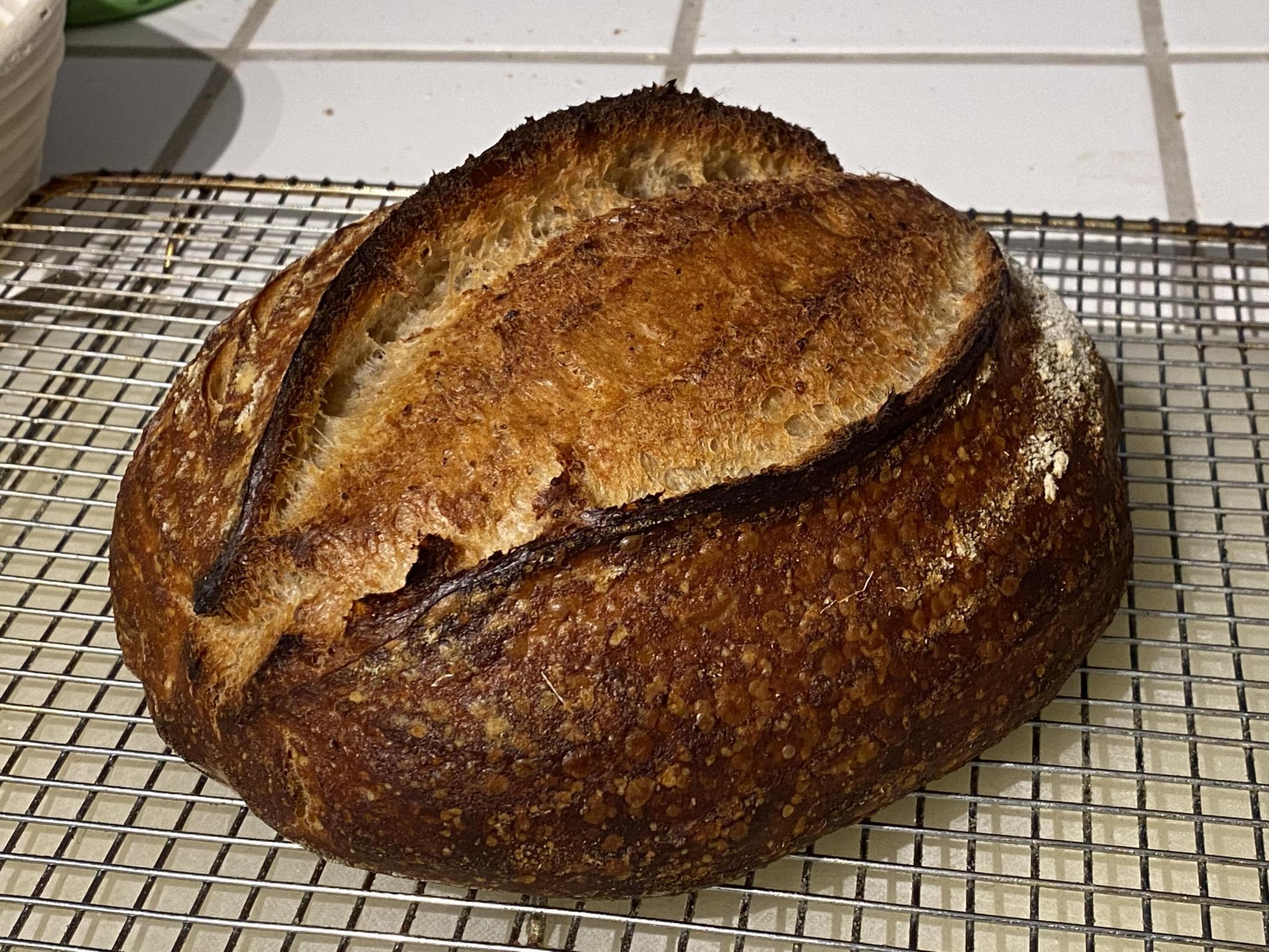 What a great looking crust (and nice scoring too).  Where did you hear about putting ice cubes in the Dutch oven?  I have a couple of aluminum pie pans filled with lava rocks in the bottom of my oven in which I use a baking stone.  In the oven where I use a Dutch oven I simply load the bread and do nothing else.  I guess added steam in the Dutch oven might be neat to try.  If it results in something that looks like your bread, I would be happy.

I can’t remember! I thought it might’ve been on this forum, but hard to say. It took me a while to dial in an optimal bake in this very old (but new to me) oven, but the ice cubes were part of it

It works nicely for me although I haven't tried baking without the ice cubes haha... others have told me it doesn't make a difference so it's validating that you've found that it does.

Steam can really help near the beginning of a bake, because it condenses all over the surface of the cold dough and in doing so releases a lot of energy, thereby heating it up quicker than just the hot air in the oven would. The effect stops once the surface of the dough rises above 100°C because the steam can no longer condense on it.

At the risk of saying something you may already know about however, it helps to be aware of a couple of inviolable physical properties of water called the latent heat of vaporisation, and the latent heat of fusion. The first of these tells you the energy required to convert a gram (or cubic centimetre) of liquid water that is already at 100°C into steam at the same temperature, is a whopping 2,230 Joules. The other property tells you that the energy required to convert a gram of ice at 0°C into liquid water at the same temperature, is 334 Joules. And there’s only one place that energy can come from: the heat supplied by your oven.

So putting ice cubes in your DO is convenient, sure, but compared to adding boiling water, it robs almost a third as much energy again from your oven - thereby cooling it down right at the time you want it to be delivering a big blast of heat to the dough.

I’m not saying it’s wrong (nothing is wrong, if it makes good bread!) just perhaps that if you’re going to do it, you might benefit from pre-heating your oven to 10° more or so, just for the first ten minutes of the bake...

My veeeery old gas oven takes over an hour to get to temp and I keep my cast iron Dutch oven in it during the entire preheat. And when it’s baking time, that thing is HOT. Just anecdotally, I don’t think I’m sacrificing a lot by putting in some ice cubes.

Somewhat related: I struggled a lot with scorched bottoms in this oven until I took my bread out of the Dutch oven after 20-30 min and finished the bake on a baking stone.

These are the workarounds/compromises I’ve had to make with my specific situation, but I still think others could potentially learn from it! (And of course there’s no way for me just to toss boiling water in my Dutch oven :D)

... and I certainly wouldn't argue with that beautiful bread you're producing! The nice glossy crust is certainly helped by the steam - so KEEP DOING WHAT YOU ARE DOING !!

Even so, purely out of a desire to share (and because as an engineer I can't help it), I plugged in a few numbers to see how things work out.

I know that your DO is HOT at baking time - but the key to this stuff is that temperature and heat energy are not the same thing. In reality the two are linked by a thing called heat capacity. This is just a measure of how much energy you have to put in to (or take out of) something in order to change its temperature by one degree C.

Unsurprisingly things made out of different materials (iron, glass, etc.) have widely differing heat capacities - so each material has a property called its specific heat capacity which is simply the amount of energy required to change the temperate of a one gramme amount by one degree C. At this point I should probably add that energy is measured in Joules, where one Joule is the energy you'd need to lift a ripe apple (100g) up by a distance of one metre.

OK now let's consider the ice cubes. Let's say your freezer is at -10ºC, so how much energy is needed to convert a gramme of ice at -10ºC into a gram of steam at oven temperature (say 200ºC)? It works out like this:

Now, we know that the heat capacity of the DO is around 4,600 Joules per degree C... so by supplying this energy, the temperature of the DO will fall by about 88ºC (160ºF). This temperature drop will take place very quickly, because the ice and water are in direct physical contact with the iron, which is a very good conductor of heat.

Of course, the DO is in the oven, so it's temperature will rise again... however in comparison with the temperature drop calculated above, the mechanisms by which that re-heating occurs (primarily by absorbing infra-red radiation from the walls of the oven) are m-u-c-h slower, and may take of the order of ten mins to recover it.

Interesting numbers Martin.  So most of the heat goes into the boiling rather than the melting or heating.  With that in mind, ice would be a good idea for for the risk-averse.

There might also be a difference in the rate of release of steam with ice compared to water, though difficult to model or measure.

This is really interesting! So is your conclusion that it doesn't make sense to add the ice since it takes so much heat out of the dutch oven? Thanks!

That really is a beautiful loaf of bread with colour and scoring to match. I usually spray some warm water on the dough before moving it into the hot dutch oven but will try ice cubes on my next bake.

This might be a daft question but do you just toss the ice cubes on top of the scored dough?

I transport dough to Dutch oven with a sheet of parchment paper. The ice cubes go “behind” the parchment. Does that make sense?

So no, the ice cubes don’t go on top of the dough. They don’t directly encounter the dough in frozen form

Thanks. That is the same way I transfer dough to dutch oven so it makes perfect sense.

This may be a dim question, but why does it need to be ice cubes?  If what we are aiming for is steam, why not spray in warm water?  Results in less temperature drop / waste of energy?

Quite simply, I can’t spray in the amount of water that an ice cube provides

Yesterday I was baking several batards for friends.  I didn't have enough bannetons so used a wicker basket in the same shape.  Put it in the fridge for overnight proof with plastic shower cap over the top.  However, the wicker had so many spaces for air to enter.  When I took it out in the morning the outside of the dough was very dry and hard.  I scored it and then remembered about putting ice cubes into the baker to provide more humidity. I tossed about 3 cubes in with the dough and thankfully it rose and didn't crack in inappropriate places.  Still suitable to give away.