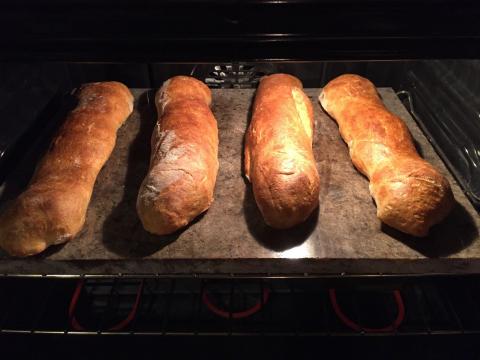 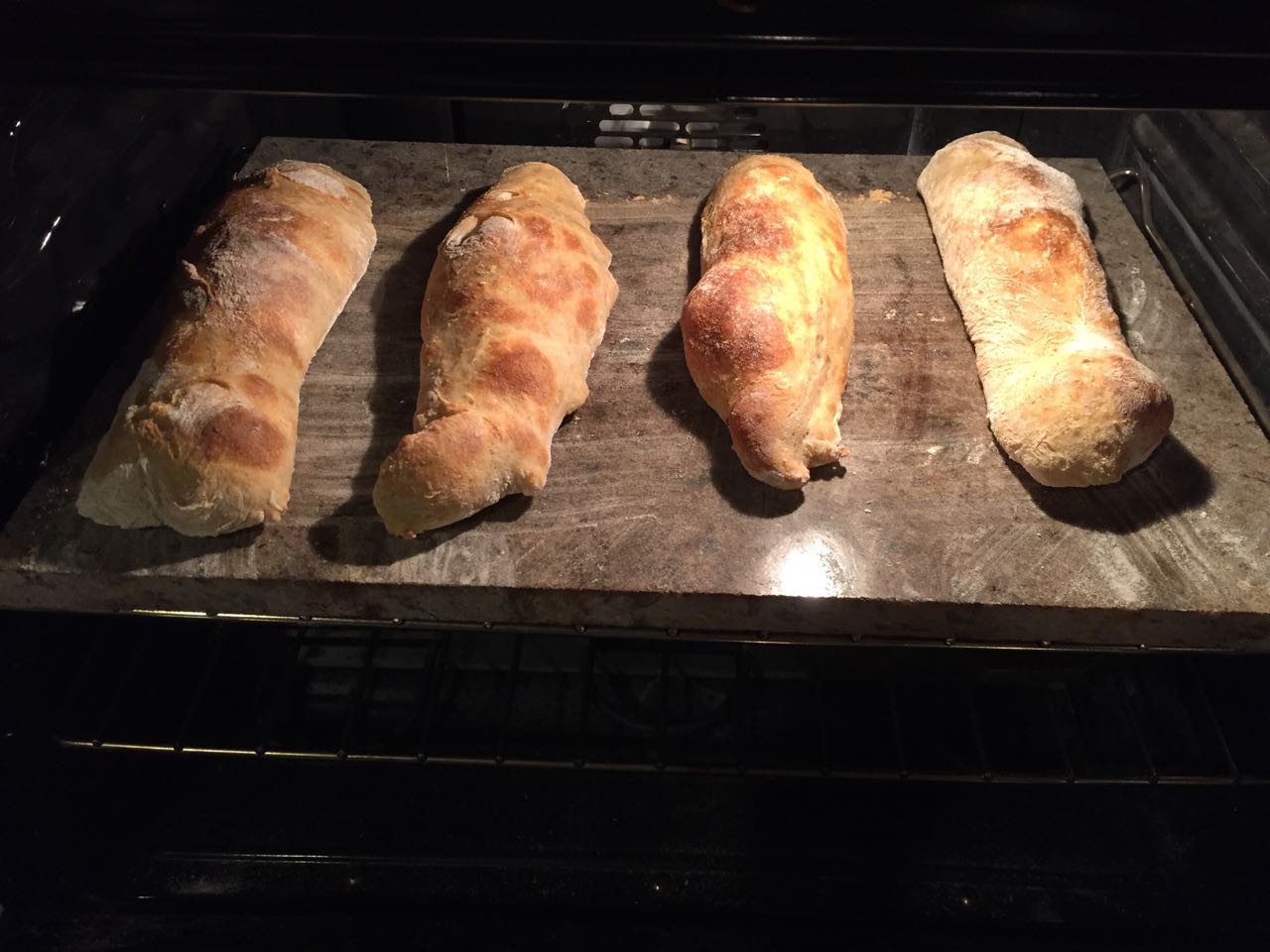 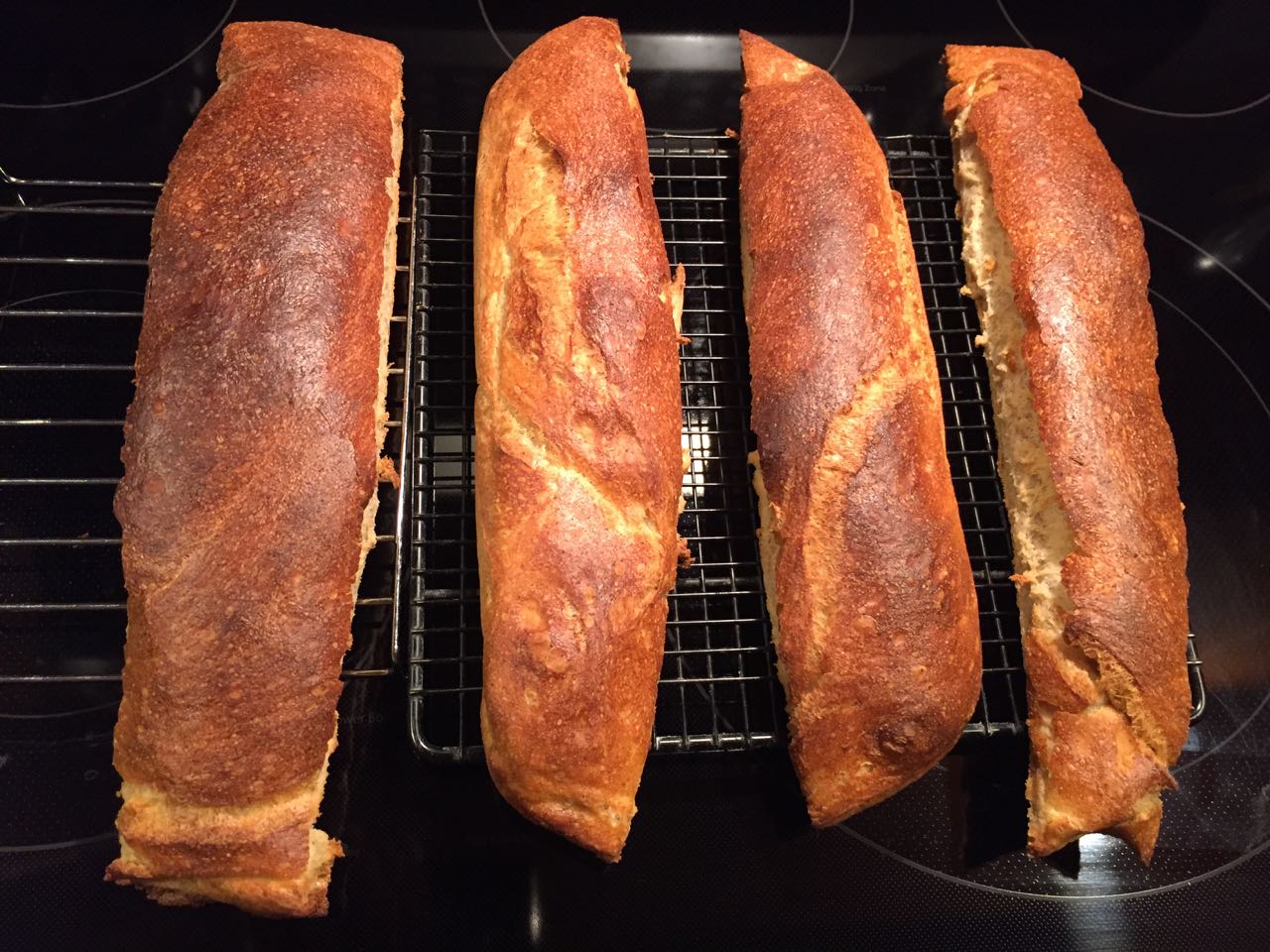 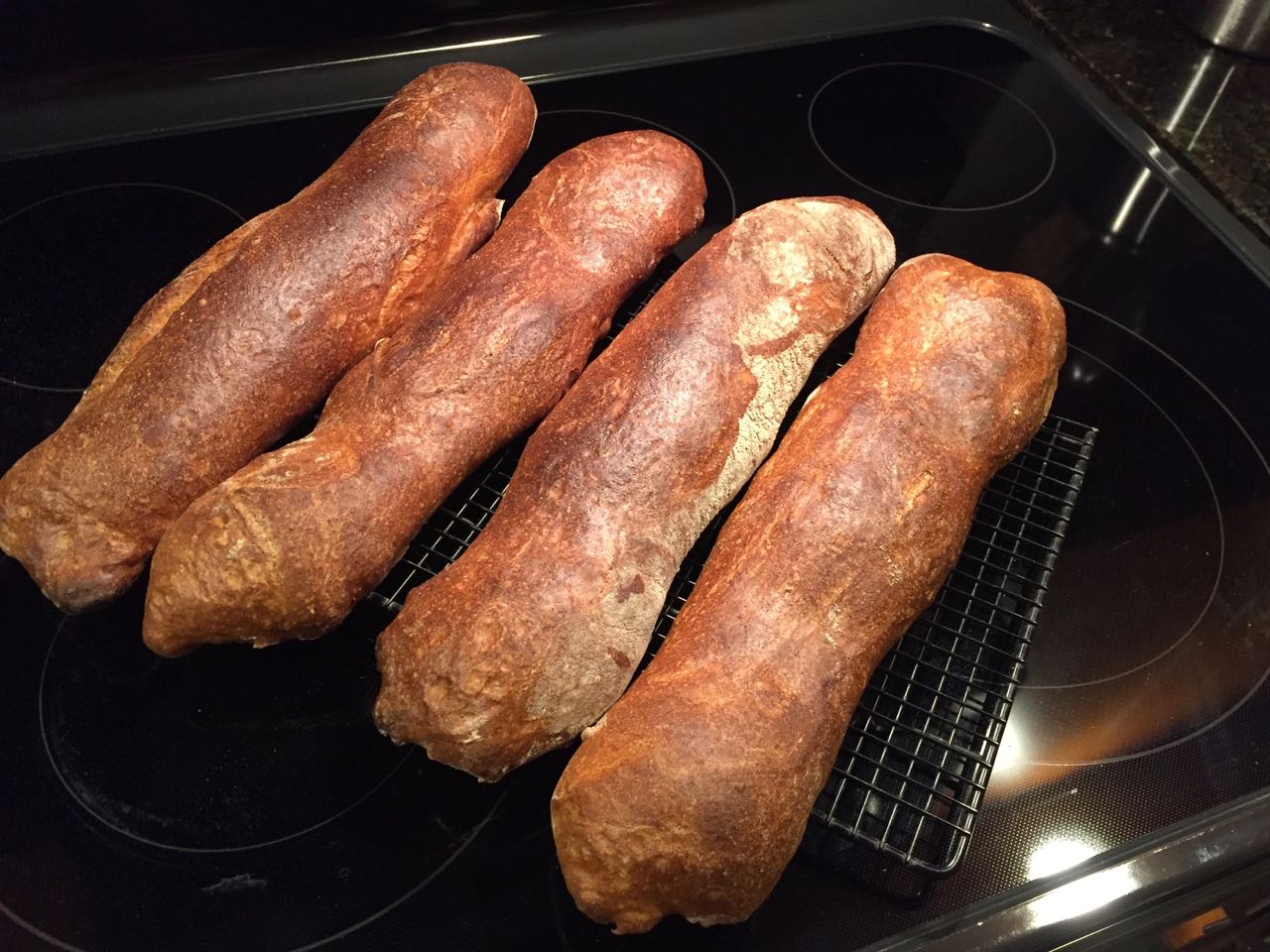 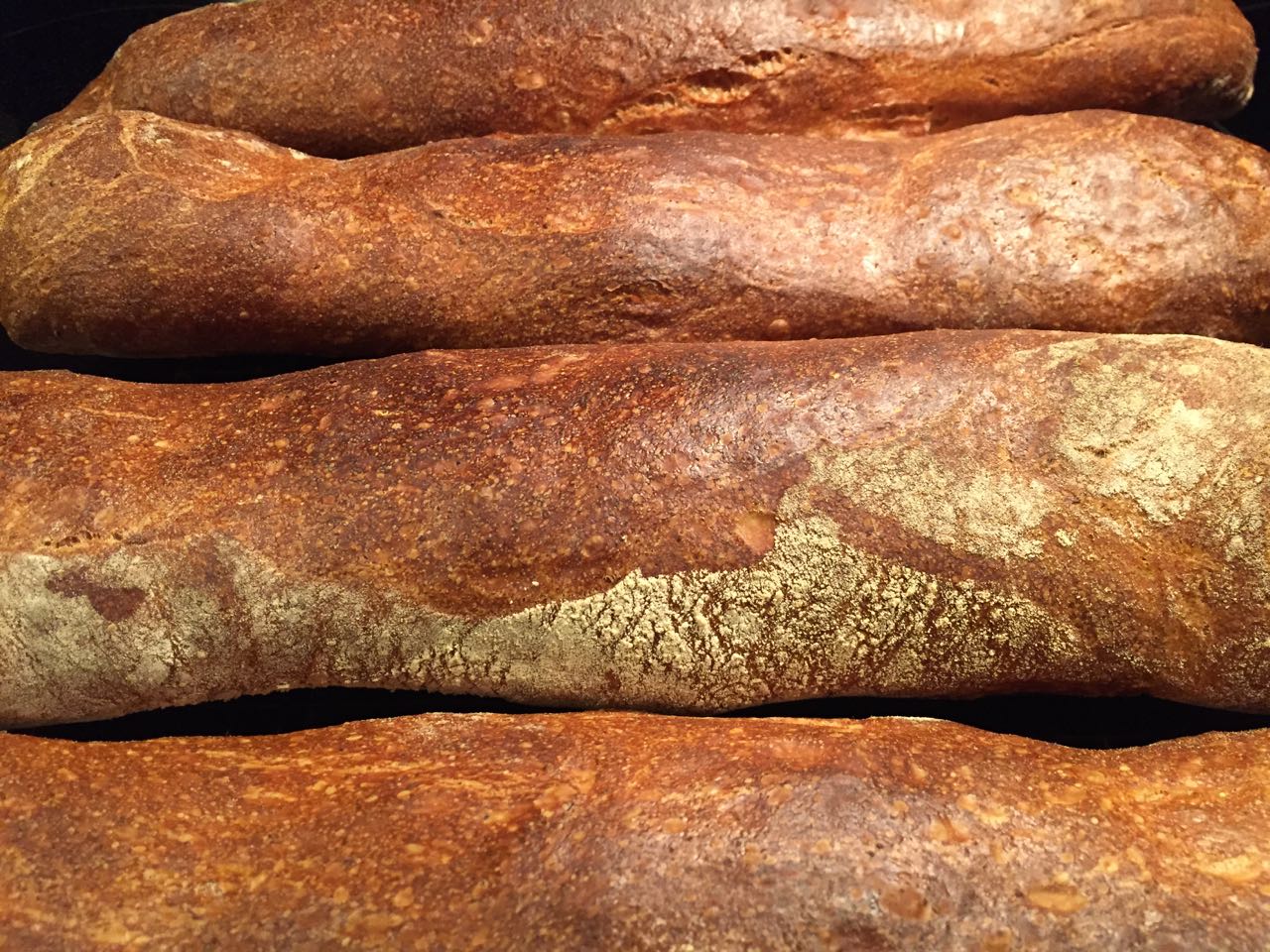 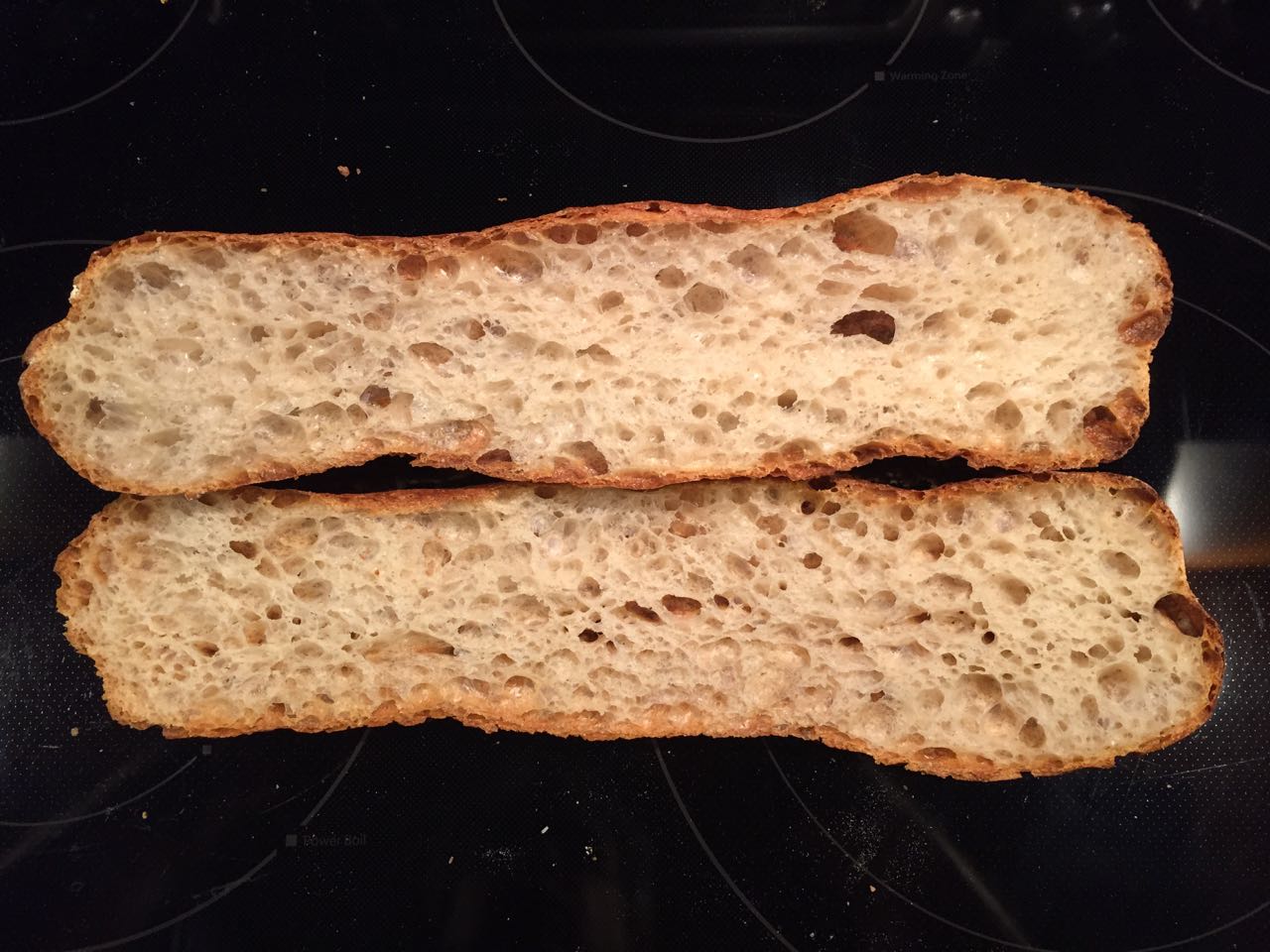 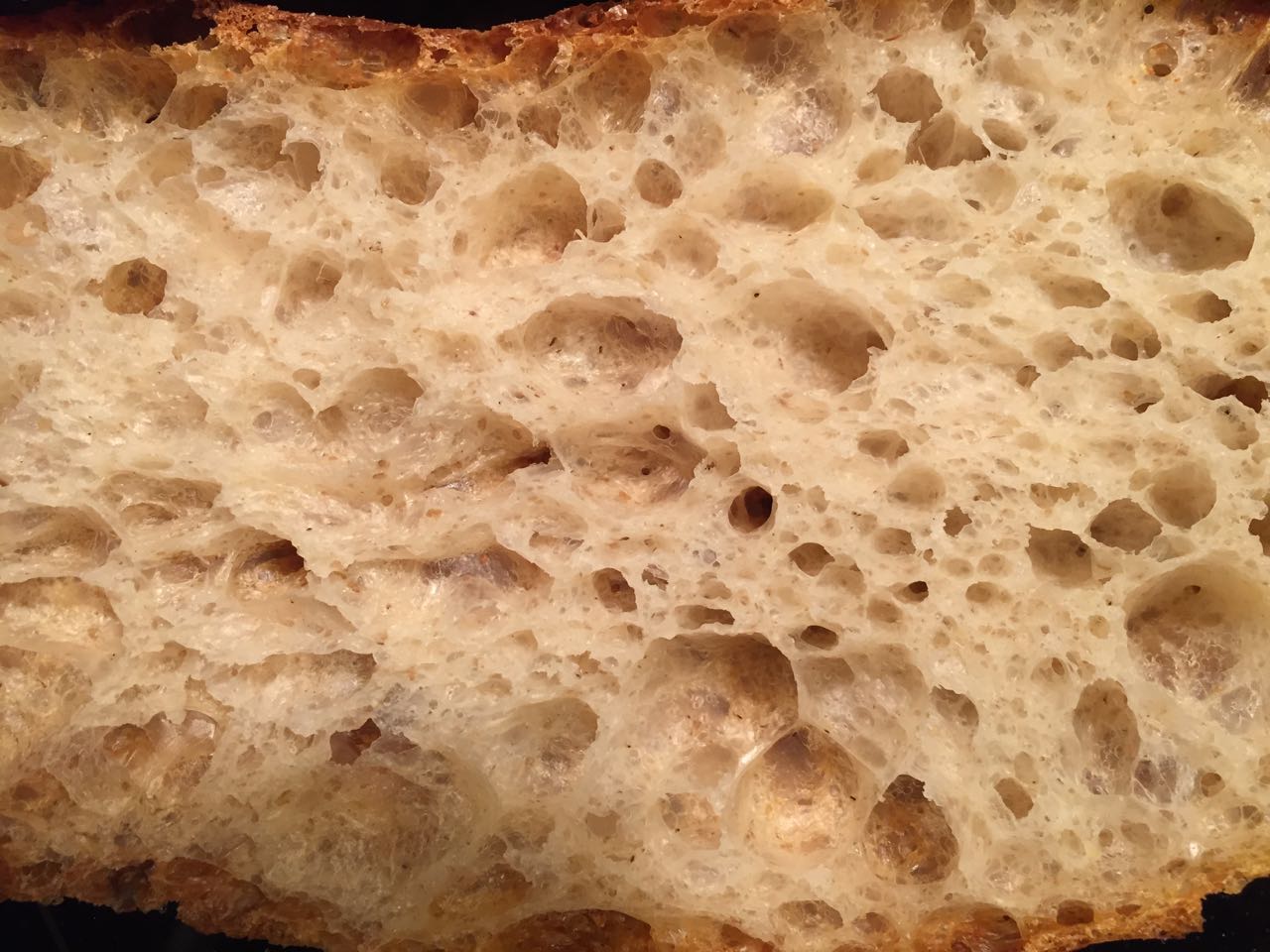 The crumb is beautiful, Alan. How would you describe the chew and taste?

How do you think eliminating the commercial yeast would affect the bread? Pros and cons.

There's a significant amount of IDY in this formula, which certainly enhances the BF timeframe.  I'll venture a guess that the BF would be significantly longer without it, not much guess work there.  As there is no retard time after shaping, rather goes directly into the oven, the IDY may also enhance the oven spring somewhat.  Beyond that, I'm lost as to what would happen.

i think that this bread is supposed to not get explosive oven spring anyway,  the two main features are the very thin hard crust and the open crumb while being much lighter, weight wise, than most other breads.

the crumb itself is not chewy at all, and my wife described the taste of an earlier iteration as reminding her of popcorn!  To me, the taste is just clean and refreshing. I think this would make for a fantastic hamburger bun with the crust serving as both the top and bottom, as it is with ciabatta.  And it makes for a fantastic toast.

kendalm, no longer active on TFL, had superb crumb, as did and do a host of others.  So when it comes to baking a true French Baguette traditional those folks regularly exhibited some truly extraordinary crumb skills.

The distinction that I guess I bring to the table is that I am pretty much willing to try and bake anything, any formula, as a baguette.  Well, not just anything, because it has to appeal to me in the first place.  That, to me, is where the real fun lies.  And I just don't see too many others do that.  So there's that (not so) secret pleasure in finding that I'm breaking 'new' ground.

I really admire Abel's postings and find trying my hand out on some to be my cup of tea.  Like this one, also particularly because I was fortunate enough to find myself in Barcelona last year, where this bread has its 'roots', and to have met a good friend of Abel's.

now on to address the heart of your question.  This dough is so much more like a Ciabatta than anything else, but even more so in that the hydration is pumped up many percent higher.  Therefore, in the same sense that Ciabatta must be handled differently than 'conventional' dough, it has to be handled at the next step of ultra care.  A pair of kid gloves inside of kid gloves might reinforce the care it took me to not screw this up.  Of course I'd like to eventually get the breads to be even more uniform in shape, so there's more work to be done.

it isn't handled anything like a standard Baguette dough.  If you haven't played around with Ciabatta much it would be good to take a couple of views of the work of Ciril Hitz at ~minute 9:25 https://youtu.be/LFja1ShZFsA .  The pan de cristal is a much looser and wetter blob though and once handled and moved to the oven peel on parchment, if disturbed, I found it near impossible to manipulate further.  And even just getting it moved to the oven peel required some nerves of steel.  Hence the double kid gloves reference.

as far as mixing, I found that the initial mix, pre bassinage and addition of olive oil, was best accomplished by hand using my standard mixing techniques.  I was able to get a smooth and consistent dough this way.  Prior, in my old Kitchen Aid mixer with the old style dough hook, the dough would be somewhat lumpy and the mixing much more work.  With this 'new' way the second stage mechanical mixing was lessened by quite a bit of time and the dough came together more rapidly and consistently.

I hope this addressed your questions.

Alan, you covered a lot of ground.  Thanks for all of the info.  One irony is that I have no problem producing open crumb ciabatta.  That dough does not present too many problems, including going from the couche to the peel (although I know now to avoid any sagging in the middle of the dough as the transfer is made -- the stretching cannot be remedied in any way at all).  Do you use a handling board for baguettes?  Or instead transfer the dough entirely by hand?

By the way, I am with you on the "rustic look" comment and always use a pastry brush to remove any loose flour as soon as the loaves come out of the oven.

a piece of engineered wood flooring bought at Home Depot and cut down. Fancy, no?