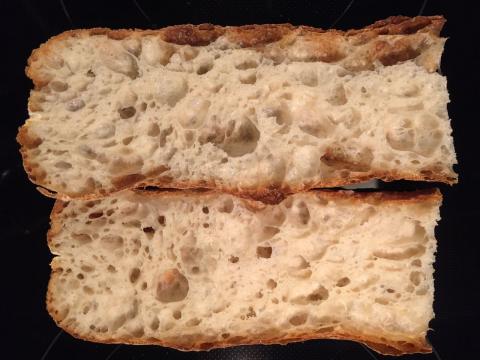 I'd been warehousing Abel Sierra's post of pan de cristal for forever.  But no more.  My first attempt 2 days ago taught me a few things about a few things, and the results, while okay, were tasty but nothing more to write home about nor to write up on TFL.  And so I made what turned out to likely be the corrections necessary.

Abel's masterful interpretation has the hydration in the 115%-120% range.  I have neither the nerve nor the skill to attempt to be in that neighborhood.  I made several changes from his posting and from what I was able to cull from past ciabatta experience as well as from a few videos in hopes of attaining a similar outcome.

This was a two preferment affair, 100% hydration flour, and a 66% hydration biga, which I added for strength, because sure as the day is long, this dough needs strength and not extensibility.  In order to avoid too much heat from mixing friction I use the levain and the biga straight from the refrigerator and the bassinage incorporated cool (but could/ should have been cold) water.

I suppose to be more "authentic" I could have trimmed the width of the loaves and made 4 or 5 instead of 3.  But for a second attempt and first successful one, I'm pretty pleased.

The pile of goop after tripling in the tub  during BF. 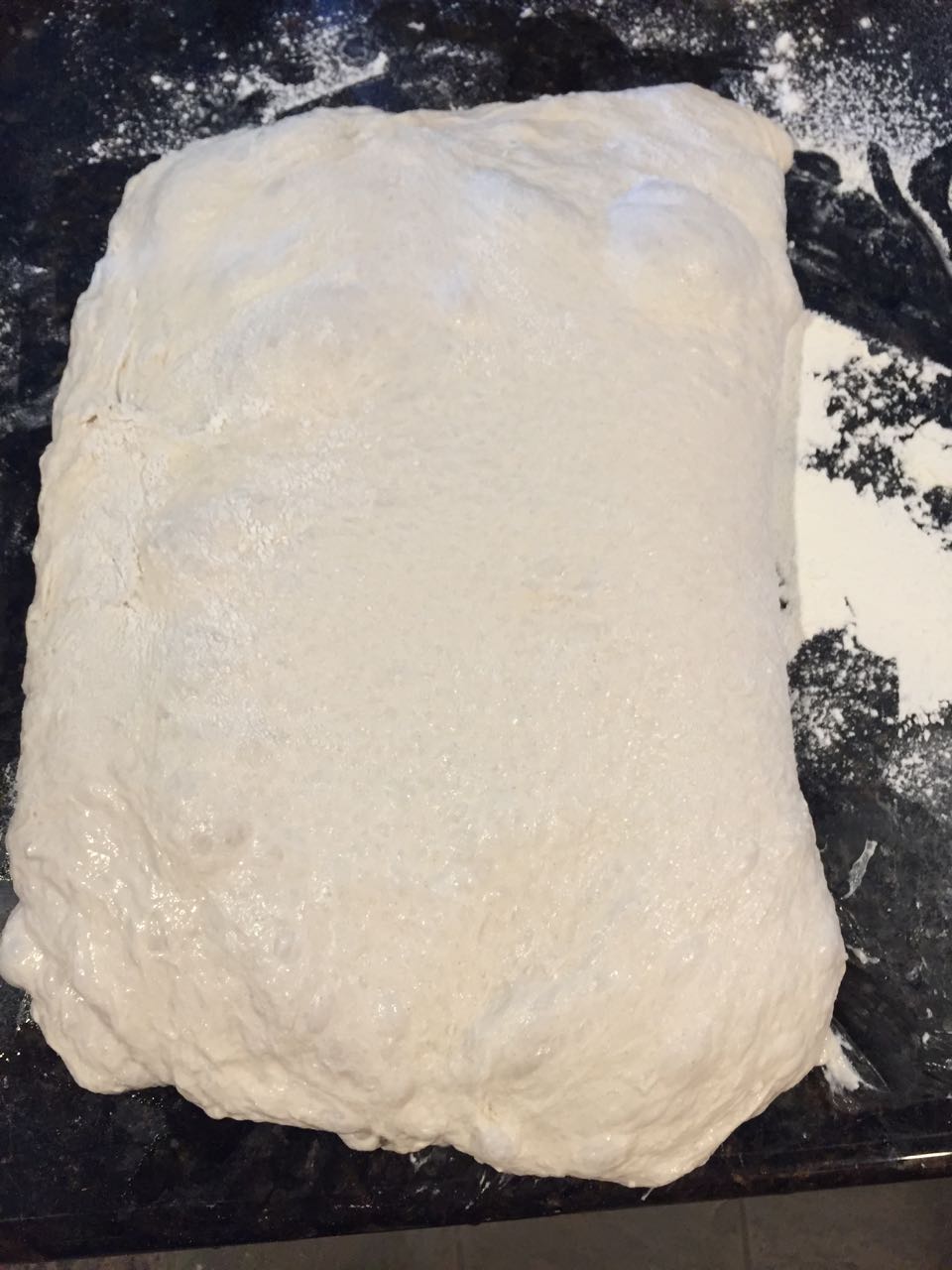 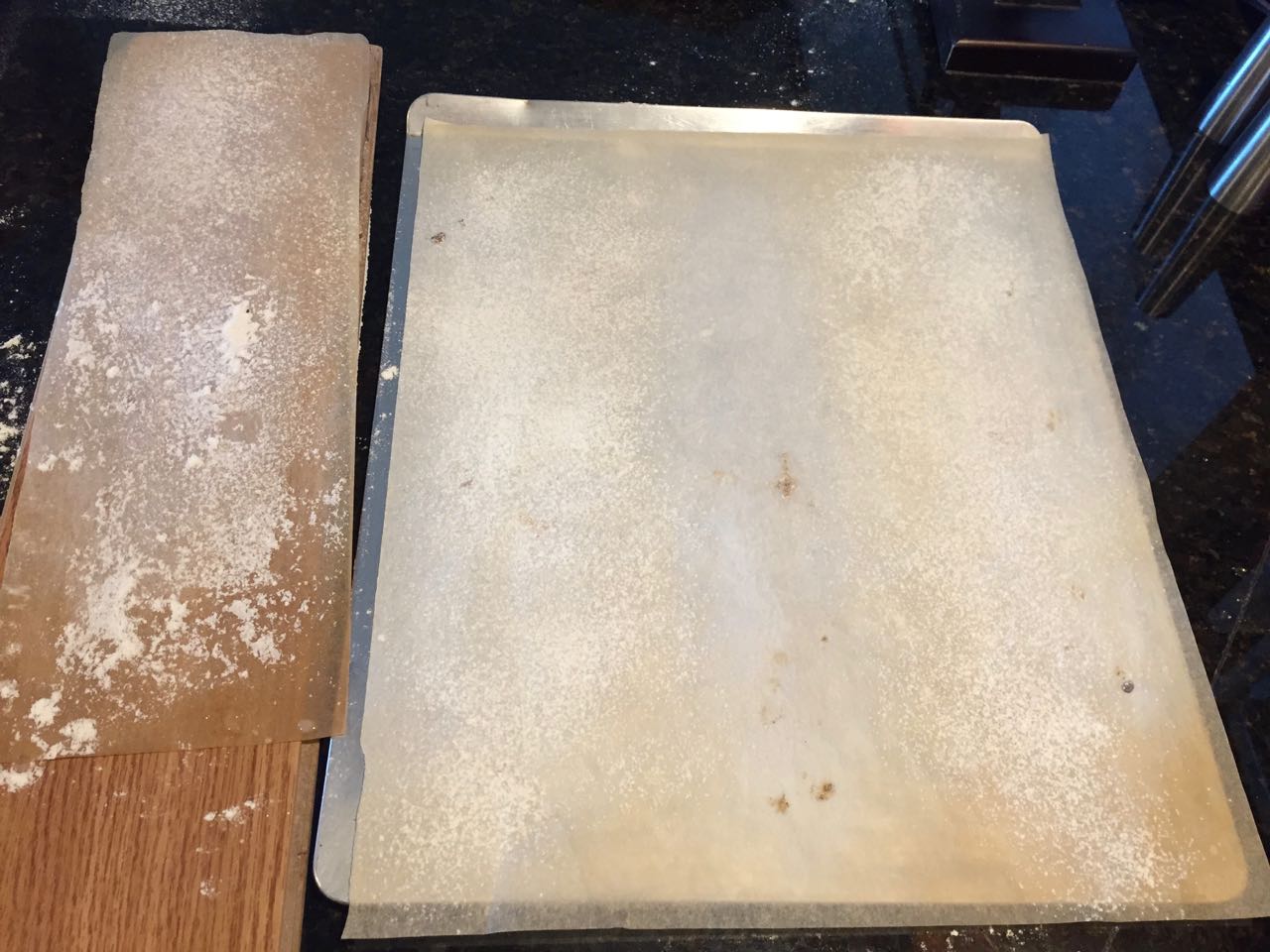 Just after loading. the dough is so wet as to appear to have no structure. 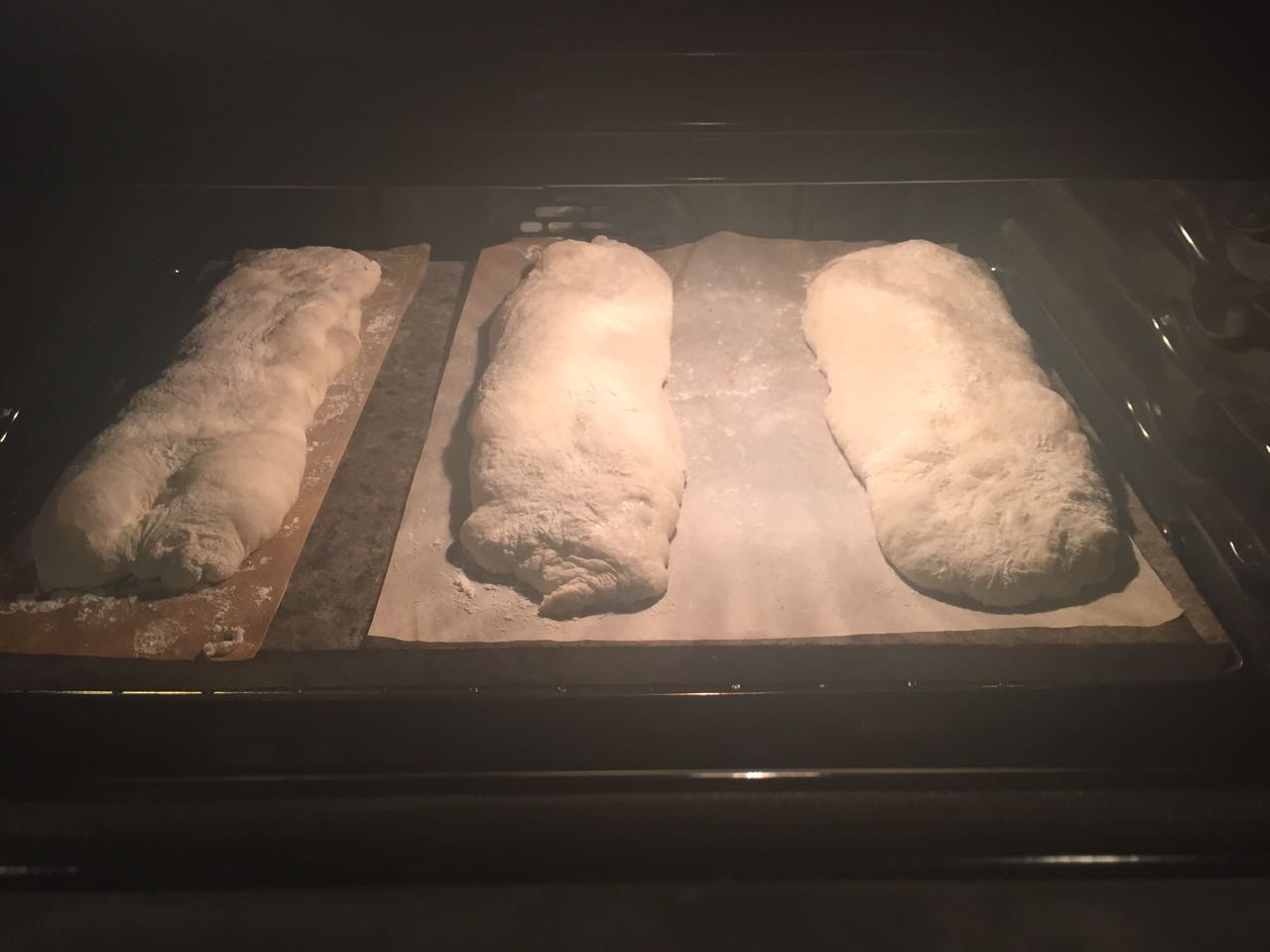 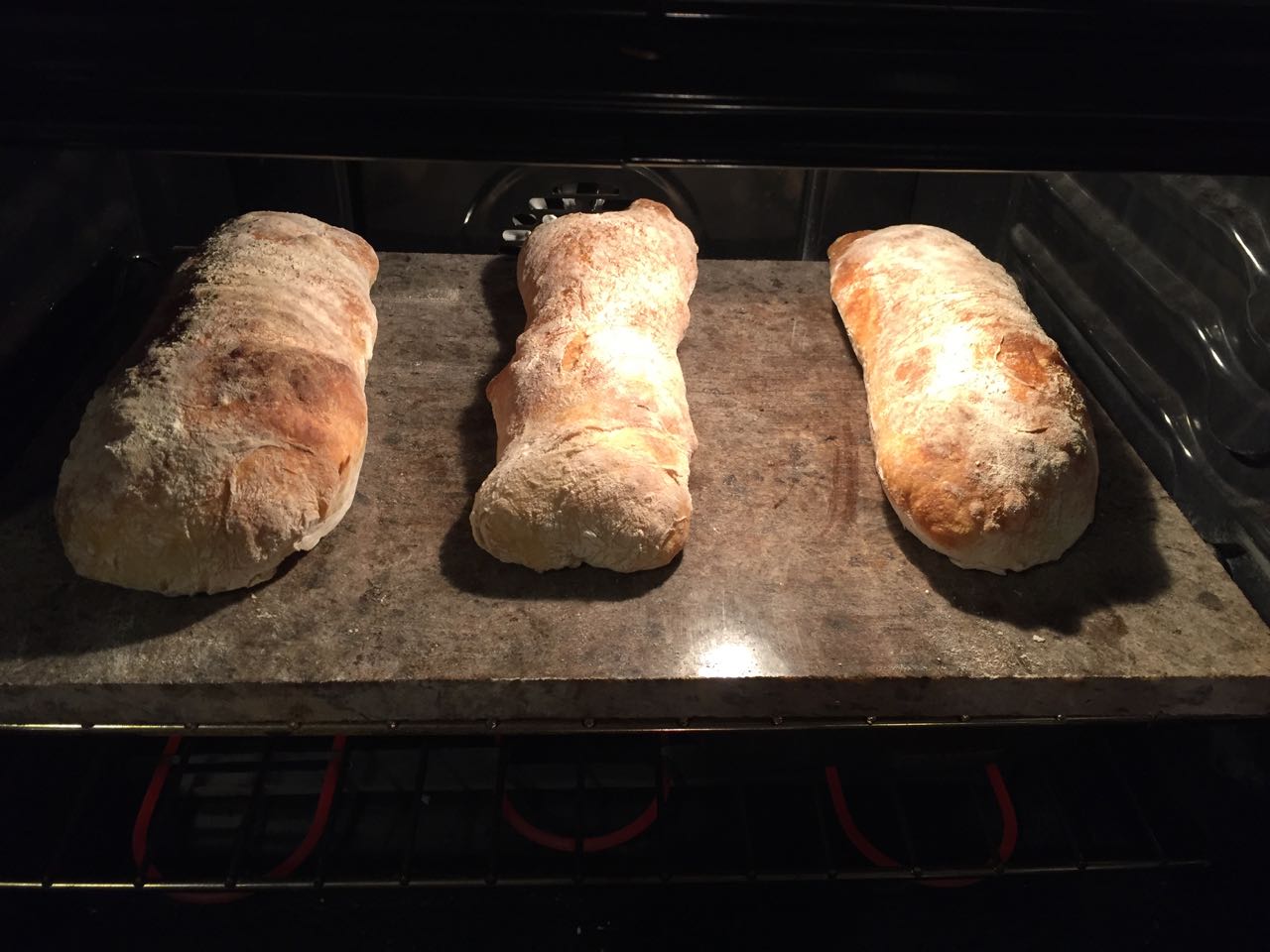 I'm not a fan of anywhere near this much raw flour on the surface.  But with a dough this wet, it may be hard to avoid. 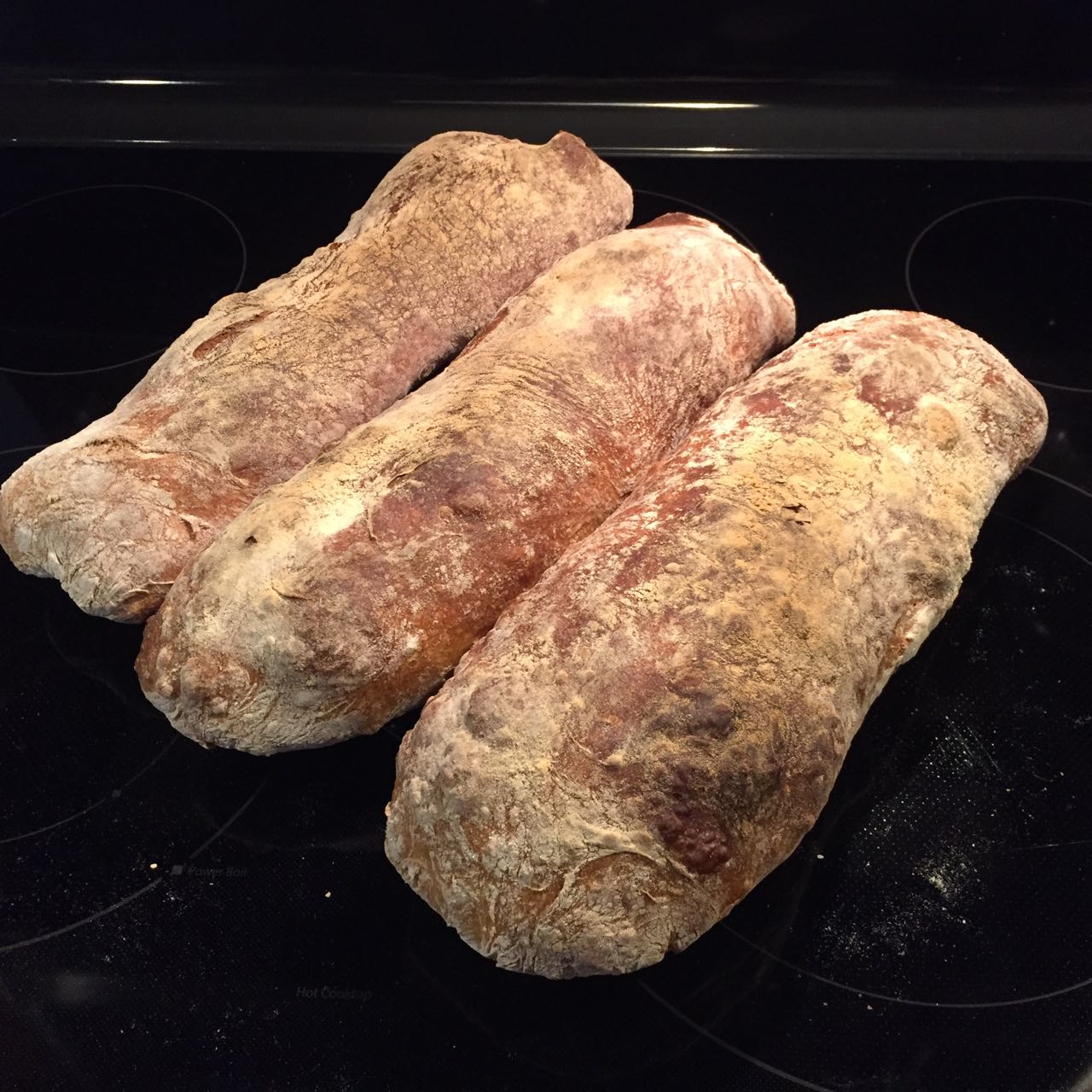 The loaves are very light having shed a lot of moisture during the bake.  The "bald spot" on the lower left was the result of a giant gas bubble developing during the bake. 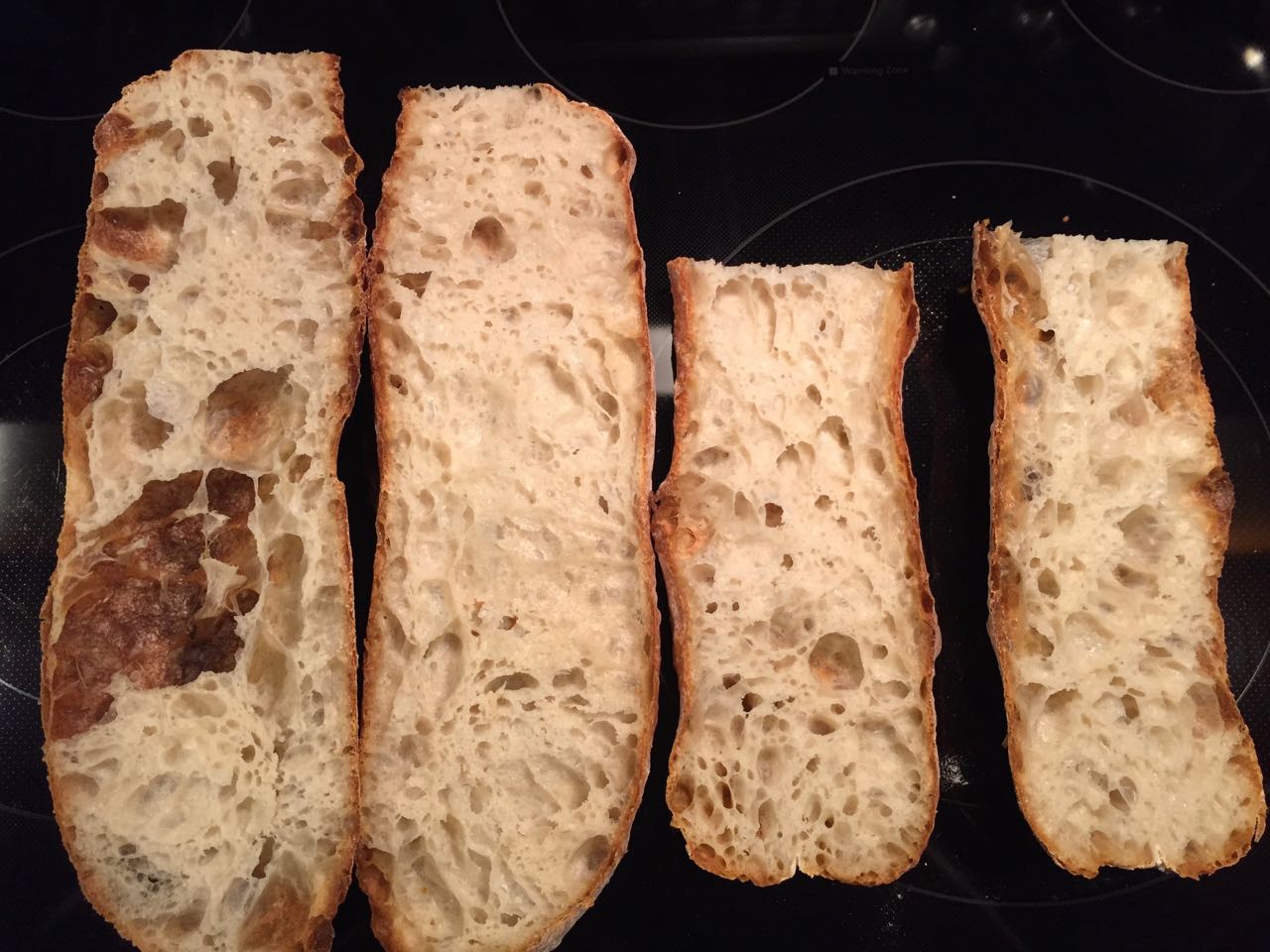 Yay!  Thank you for posting...  Such a flavourful looking crust.

I'd never heard of, or seen, "pa amb tomaquat" until my recent trip to Barcelona.  There was a long thread from years ago on TFL that you also participated in, which preceded my TFL days.  And from the looks, trials and travails of what was posted it seemed as though "no one" could get it quite "right" back then. Indeed, my first attempt exhibited the same closed crumb aspects.  I've great respect for the work that Abel posts here - attempted a number of them, and that, along with my recent voyage, made me want to get past the closed crumb result.

Yes, although I'm not beholden to the open crumb-ness of all breads, it is a feature of this product.  And due to it being so darned wet, it produces a certain strain of ugly beauty.  I've consistently been able to produce open crumb ciabatta with a fair amount of control over the quality of shaping, but this is a completely different kind of animal.

I shuffled one of the loaves off to a neighbor who grew up in S. Italy.  When I explained the tomato method to her, she said that this was quite typical of how bread is served in Italy, at least where she is from.  First time I'd heard that.

Really nice work.  That crumb is so alluring and I love the rustic look.

I'd seen this posted by Abel several years ago and would on more than an occasion look at it and tell myself that I'll get around to it.  The Italian neighbor that I mentioned to Mini got back to me last night and wrote "As soon as I cut your bread, I knew it was going to taste amazing.  The holes inside were the biggest I had ever seen.  It was so light and fluffy but with a crunchy crust.  Everyone enjoyed it.".  That's about all the endorsement I would need.

Abel states that the name comes from the crust "shattering" upon being cut into.  He said the sugar that he adds contributes to the thin crisp crust.  I believe him!  When I get around to trying my hand at this again, I'd like to divide the dough to give the loaves a thinner more baguettes-like width.  And which I believe is how much of the bread, as with Abel's example, is designed to be made.

Mouth-watering!  Two questions, if you don't mind, Alan: do you first allow the biga and levain to fully ferment before chilling (overnight retard?). Then, my understanding is that developing biga is a long process (+12 - 16 hours) at quite a cool temperature (12-14dC), so does the chilling suggest further time still at a lower temperature?

On the counter top. Then into the refrigerator for the overnight nap. They will still mature for a while as they cool down.

My kitchen is a stable 78-80dF all year so whenever I deem the two preferments “ready”, off to the refrigerator they each go.

No other M.O. in mind but cooling them down until I’m ready for the mix. Usually the next day.

Gloopy, for sure!  Great recipe, Alan.  I used rye instead of AP flour starter so I adjusted the remaining flours.  Hints of the sugar and olive oil makes this a very tasty addition to my favorite baguette and ciabatta recipes.  My oven temps seem a bit aggressive so I'll tap them down a bit next time.  Not the best of shapes either, but the taste buds offered no resistance :-).  Joe 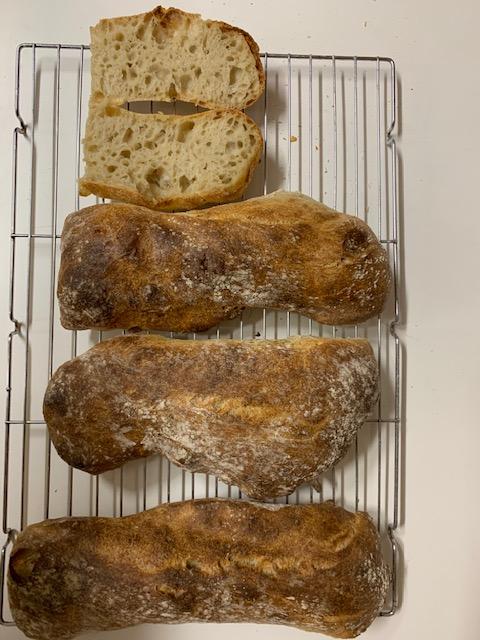 i think rustic is a word that goes well with this bread.

You did a good job of keeping the raw surface flour down.  This is the type of dough that really humbles someone considering it is so wet.

Abel says that the sugars will help to thin the crust on the dough giving it a shattering effect when sliced or bitten into.  It seems that way.