I had the day off yesterday, and decided it would be a good day for baking! I even got a new scale, and was very excited to try it out! 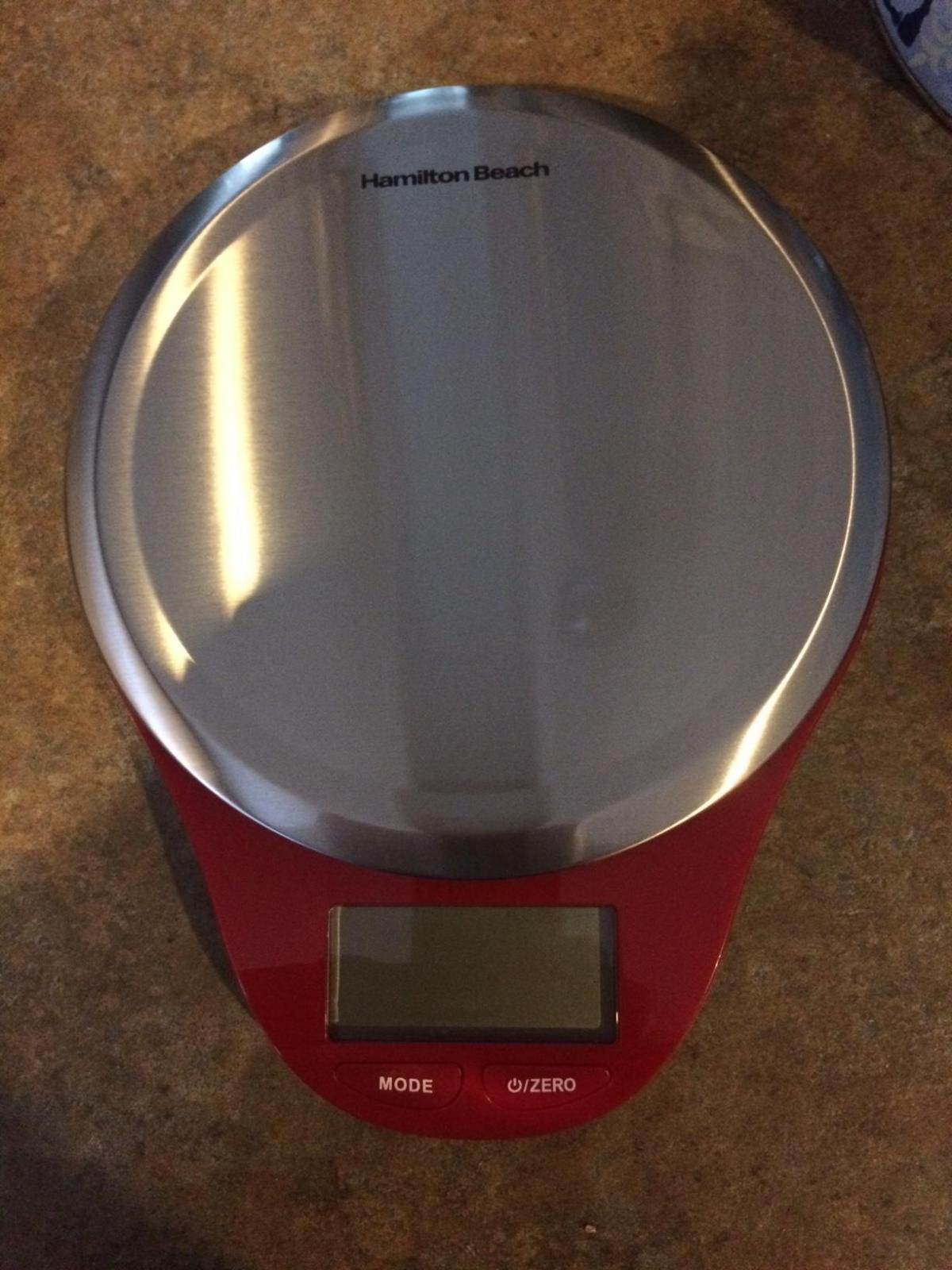 I decided to try out the basic recipe listed on the site here. I was hoping it would yield a decent loaf that I could then add to in the future for more variety. 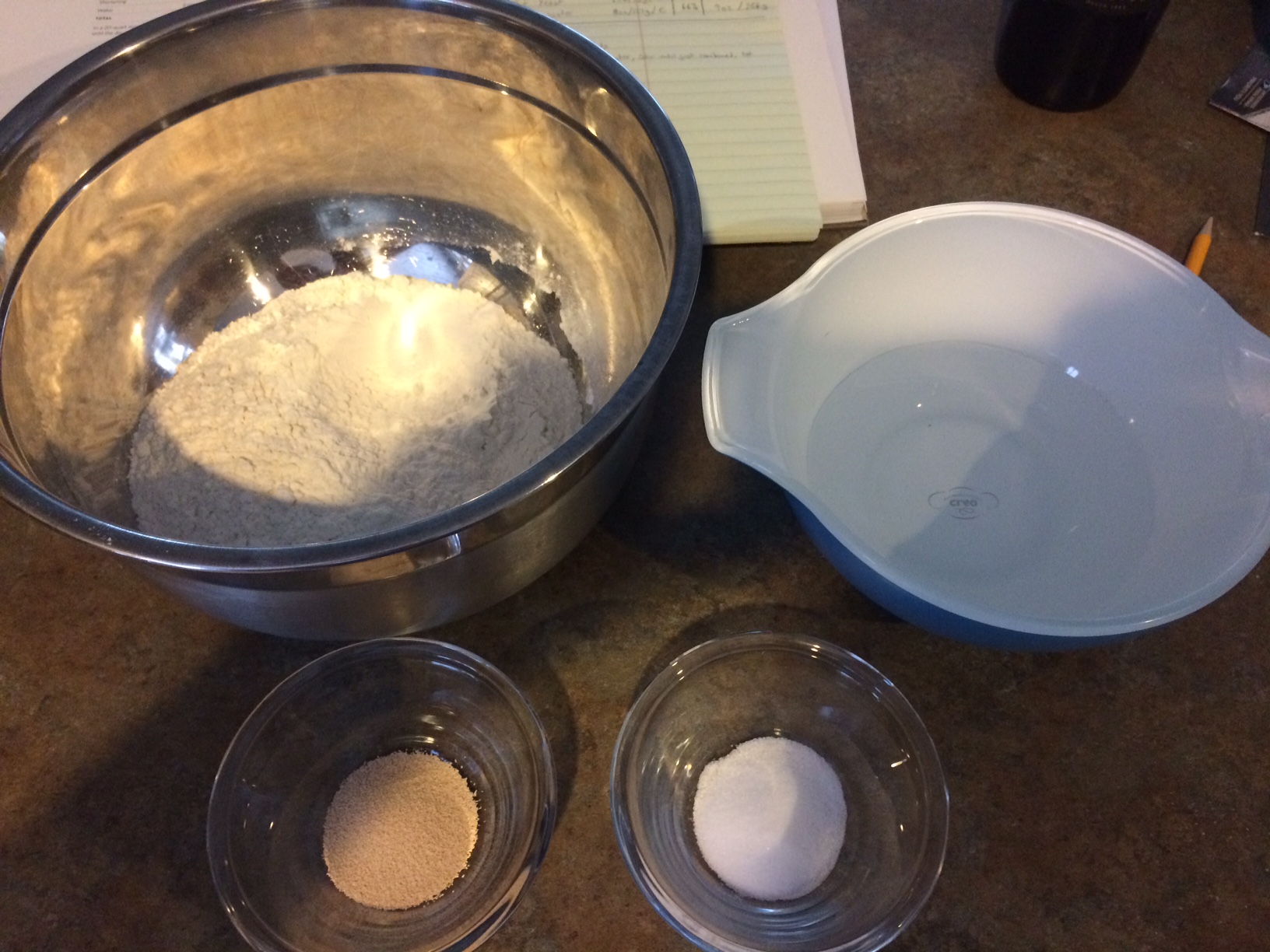 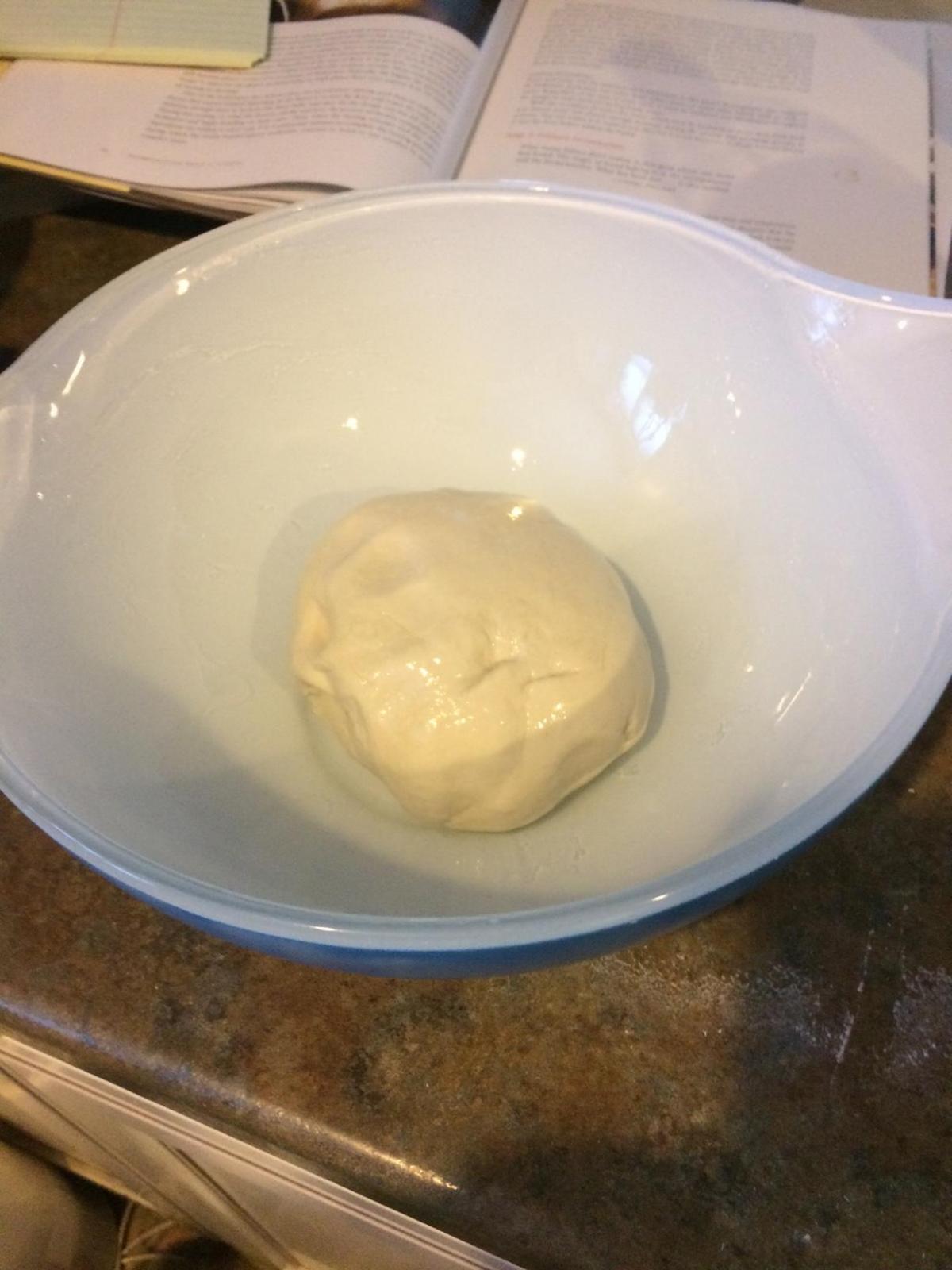 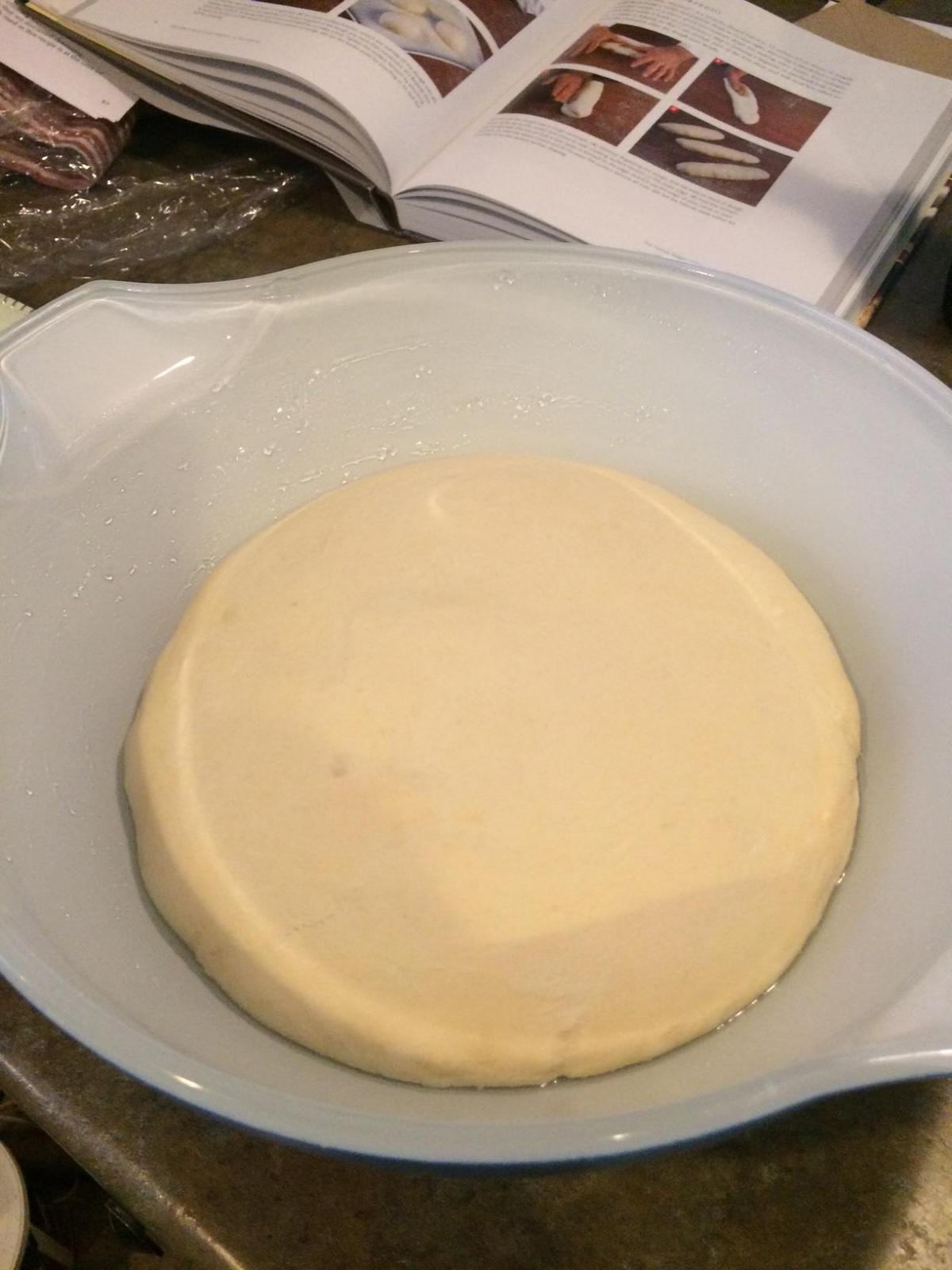 Got pretty good rise out of this, and didn't have to do much shaping, but I think I may have punched down a bit too much (check later photos).

The second rise went well, but the dough lost a lot of volume when I scored it. It puffed up well in the oven, though. I preheated to 450, and had a small pan for water heating with it. When I put the dough in, I added about 2 cups of water to the pan to steam it, then dropped the temperature to 375. 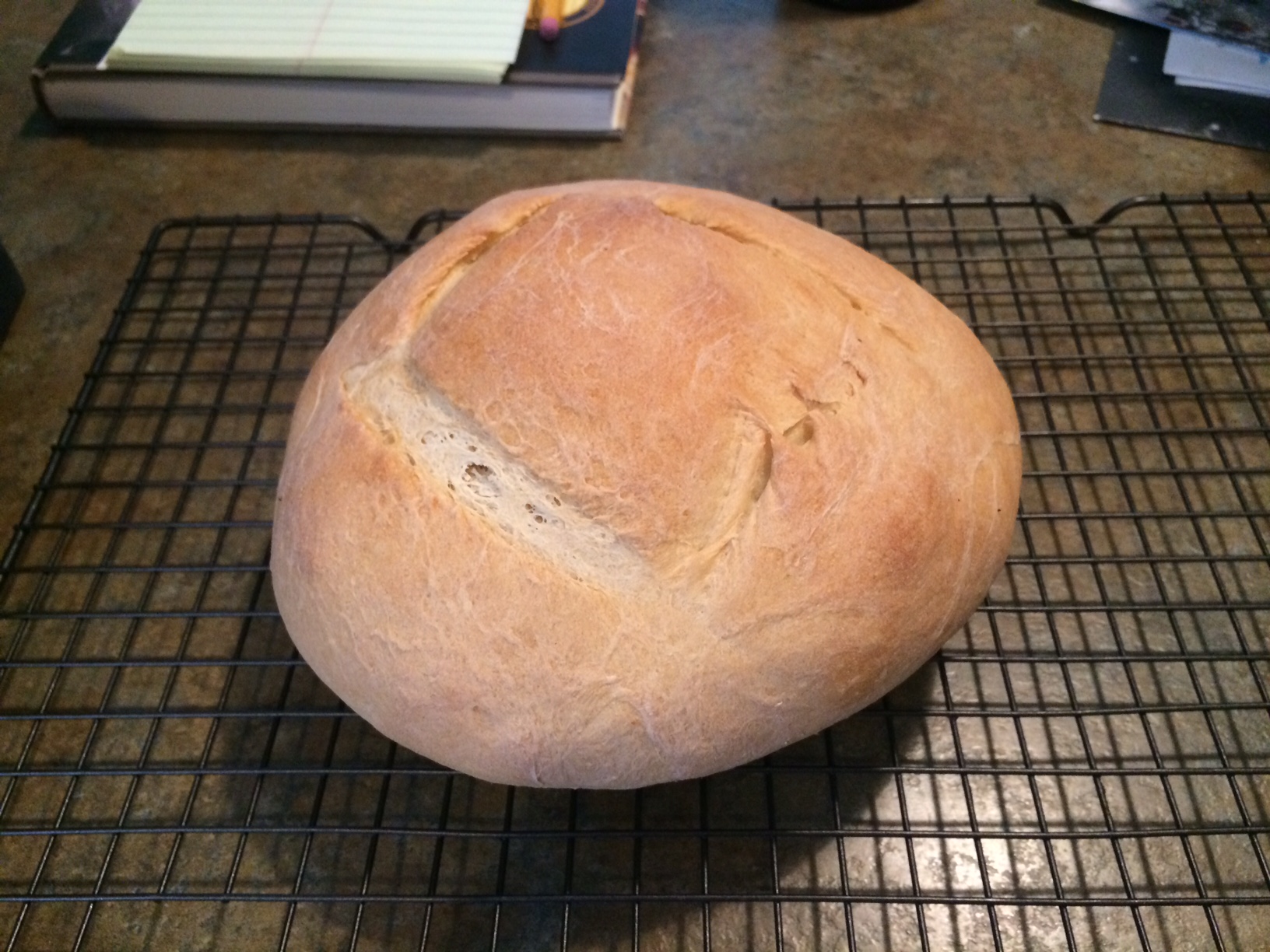 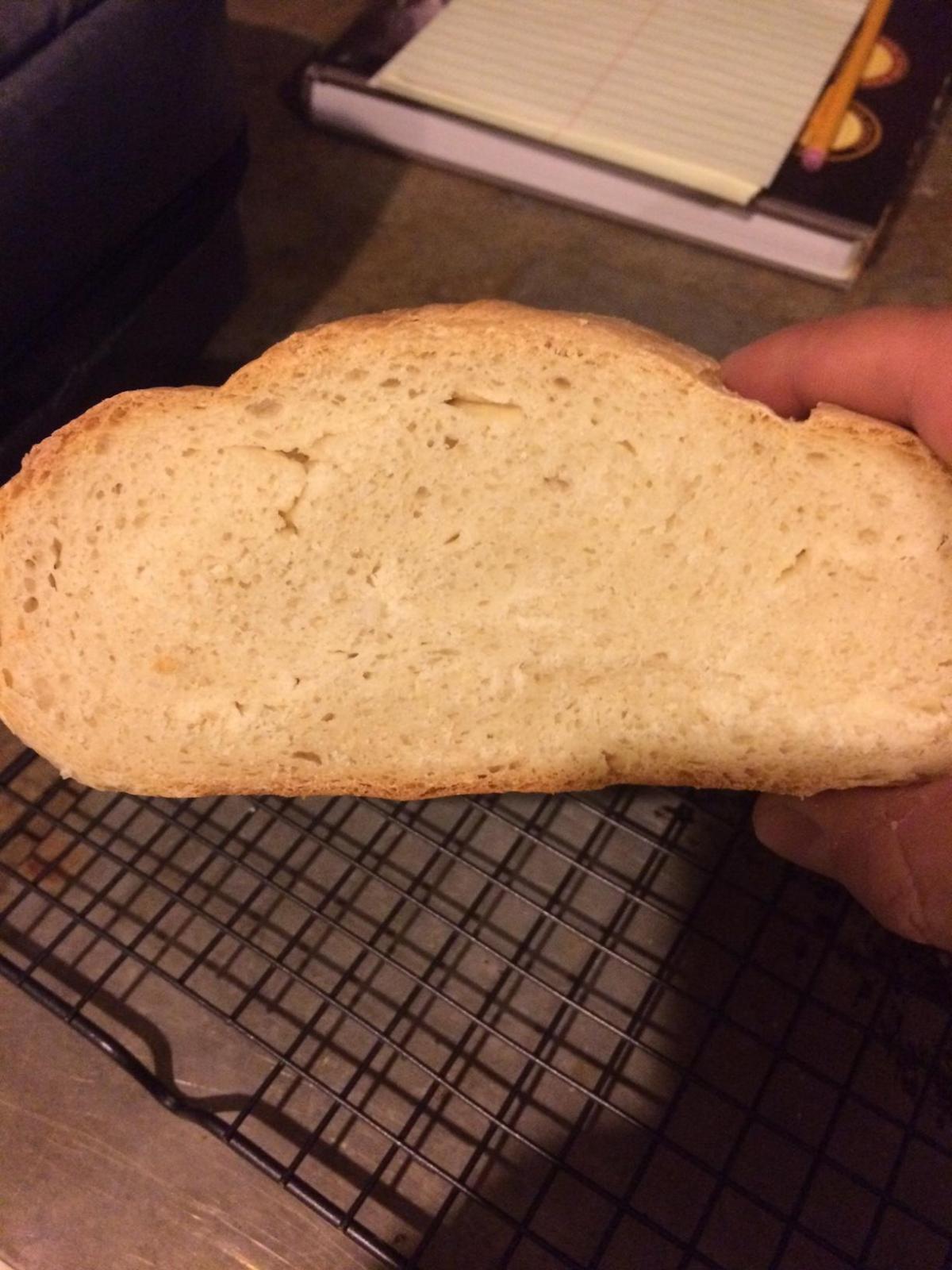 Overall, this was a fairly easy process. However, there were some issues with the final loaf, and I'm not sure how to correct them for the future.

1. While the crust was good and the crumb seemed alright at first cut (see above). The flavor, however, was quite salty. Not sure if this was due to the salt content at the start, or some problem with the yeast.

2. I noticed that there was a lot of inconsistency in the crumb after making a few more cuts. 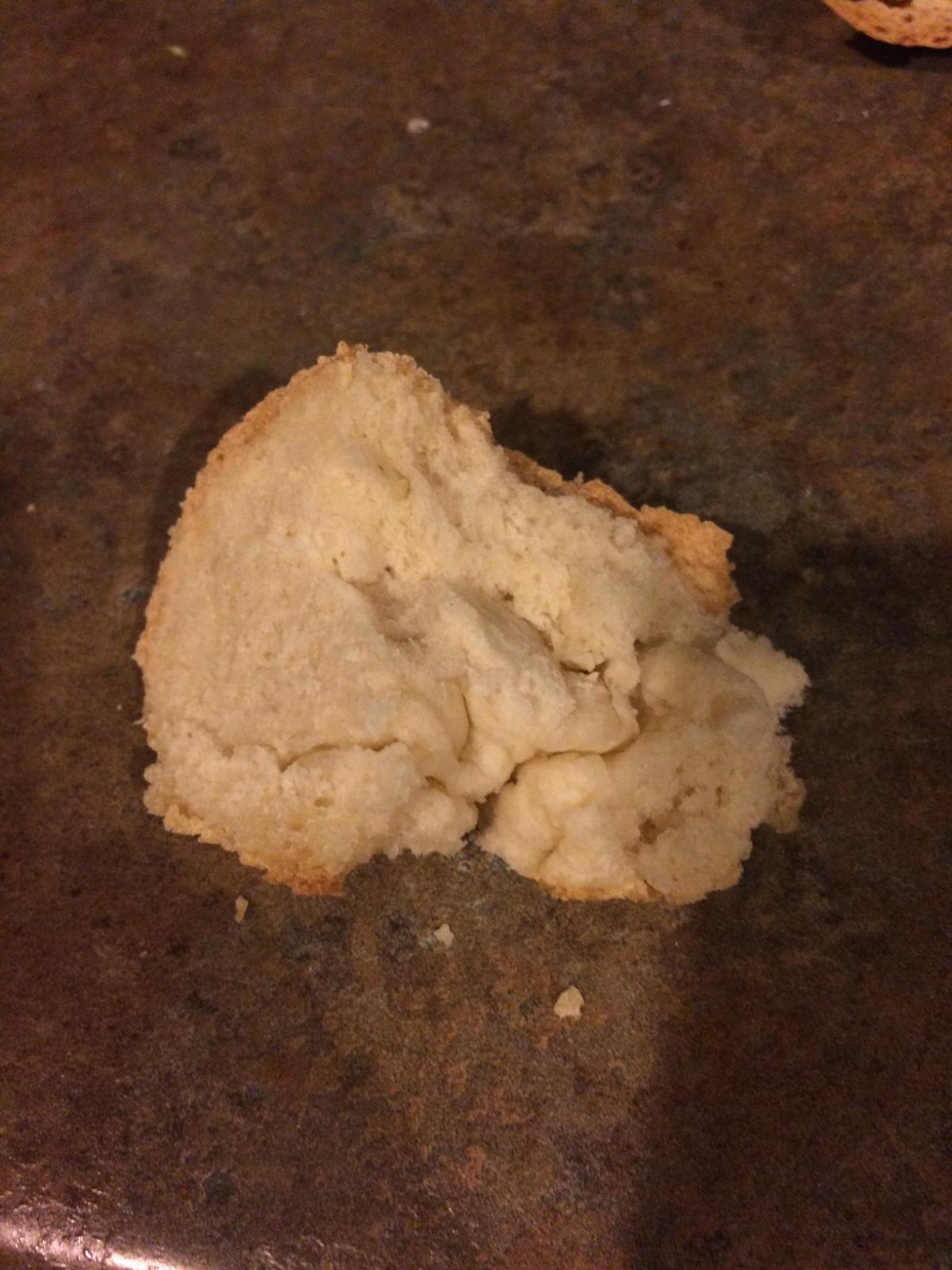 Most of the loaf appears to have baked normally, but there are sections like this that appear underbaked. I'm thinking about baking at a higher temperature next time to see if that fixes the issue. It may be that the boule shape made it so that the temperature wasn't high enough to properly bake the inside.

So, overall, not the outcome I was hoping for, but not terrible either. I'm going to try a bit less salt next time, more careful handling/scoring at the end of the process before baking, and baking at a higher temperature to see how that impacts the results.

If anyone has any insights or recommendations, I would be grateful for some guidance.

Until next time, Bake On!

Hi Jeff, for a first loaf, this bread looks pretty good! I’ve been baking bread for over 20 years and I’m still working to towards perfection. It is a life time venture that is nearly (maybe completely) unattainable. But the pursuit of perfection is what drives most of us on...

Let’s convert this to grams and use that nice scale you just bought.

I hope others check my math and let us know if 2% yeast is a good starting point.

Here is a good link describing Baker’s Percentages. https://www.kingarthurflour.com/pro/reference/bakers-percentage  If you need help with this or anything else, let us know.

So I was worried when I read your list of ingredients because they were by volume... I'd strongly recommend you get an inexpensive kitchen scale and use weight. It's more precise but especially with salt, it's critical. Why? Because table salt and Morton's kosher salt are almost 2x the amount of salt per volume as Diamond Crystal. That is, if you measure out a level teaspoon of each, the Diamond crystal will weigh about half has much as the other two. If a recipe was developed with Diamond Crystal using Morton's will make it much saltier.

This isn't an issue if you go by weight. 30g of salt is 30g of salt, regardless of the crystal size or shape.