It is common practice among bread bakers to reduce the heat of the oven at some point during the bake. The idea being, high heat initially to produce huge oven spring, then lower heat to prevent burning. A recent test seems to indicate that what WE THINK is happening, isn’t. 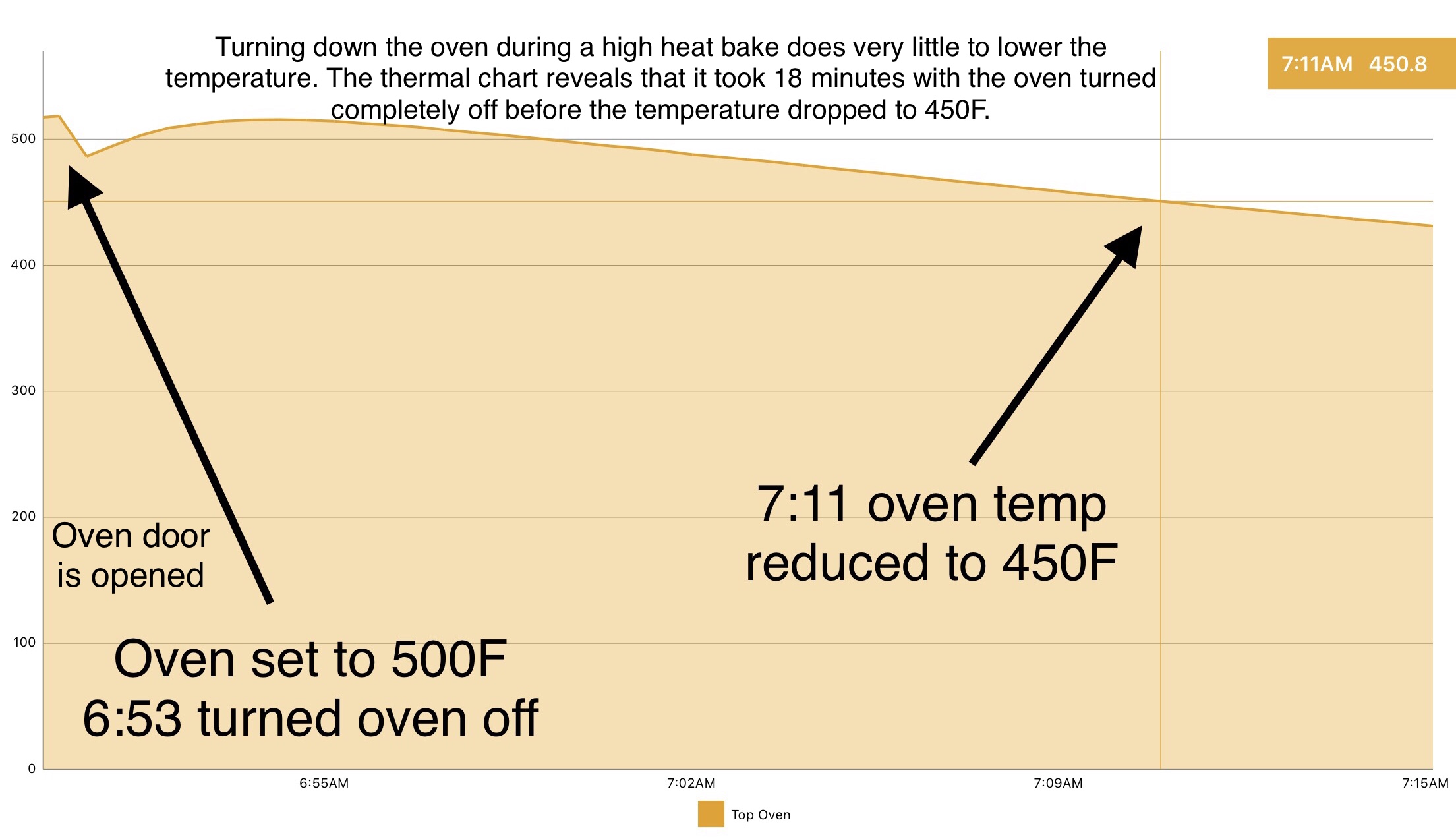 The chart above was logged with the temperature probe placed 1 inch away from the baking stone. The oven had already baked 2 loaves and remained set at 500F for at least a coupe of hours. At 6:53 the oven door was opened and at that time the oven was also turned completely off. It took 18 minutes with the oven off for the temperature probe to register 450F. The actual drop was 67 degrees F.

From this I conclude that if we want to noticeably reduce the oven temperature during a bake, it is best turn the oven off and open the oven door for a predetermined time. As of yet I have no idea what that duration of time might be. The top left side of the chart above shows a quick reduction in temperature when the door is opened, but recovers quickly once closed.

- - - I am challenging another concept. The pros do, so we do it. Inject steam initially, then at some point vent the oven to remove it. I use a home oven so we know that it is not a sealed unit. But recent test of never venting the oven during the duration of the bake is producing very good results. My breads have a very chewy crust. This method seems to tenderize the crust ever so slightly. - - -

I hope other bakers will challenge the status quo. It is not irreverent to question the things we hold dear. Instead of being insulted when our beliefs are proven wrong, shouldn’t we rejoice in the truth? The truth needs no crutch, and it sets us free...

With that said, maybe my observation above is wrong. And if it is, I want to know...

The oven is set to about 20dF higher than the intended bake temp.  Once the loaves are loaded onto the baking deck and steam added, the oven door closes and the oven is re-fired to the bake temp.  The oven door doesn't re-open until I'm ready to release the steam and rotate the loaves.  Oven door closes, oven is re-fired back to temp, and this is repeated each time I open the door during the bake.

May not be right for anyone else, but it sure works for me.

Air temperature in the oven is one thing, heat transfer through radiation is another.  You only measured the former, and completely ignored the latter.

I'm dealing with a refurbished antique stove that's probably close to 100 years old (mid-'20 or '30's). Originally, it was lit with matches—before being refurbished with an oven temp gage that does a darn good job getting to desired temp. The oven is very small (14" wide by 18" deep), heats from the bottom up only, and, given the size, concentrates that a lot. The more with my bread as I'm using a cast-iron combo rather than working with steam and a baking stone (which, in my oven, tends to be a little challenging).

Don't get me wrong. I love, love, love my stove. But sourdough baking has had me thinking a lot more about oven temp than I ever did when I just baked up cookies. After a summer of experimentation, I realized that cranking it to it's highest temp, creates a crust too fast and I get a flying saucer (with great crust). If I turn it down low then high (as suggested), the dough bounces up too late and you get that domed crust above a big air pocket and gummy crumb. The goldilocks area for my oven seems to be 450, start to finish. Hot enough to bounce it up (if I've done everything else right), but not too hot to give it a crust before its ready. Crust is not as crackly as when I had it cranked up, but it's very good.

Which is why I'm super interested in this discussion of oven temperature; I hope those discussing it will take into account different kinds of ovens. 500 on an oven wide enough to bake two loaves at once with convention and fans and even a lightbulb nets very different results than with my one-loaf-at-a-time, gas-flame-from-below oven.

Good spring, good thick crust, well-baked interior.  Works well for me (most of the time!)

I heat up the oven to 475F with the Dutch ovens inside, then once the pots are loaded, drop the temperature to 450F. After I remove the lids and switch the pots from the bottom rack to the top and vice versa, I drop the temperature to 425F. The reason for dropping the temperature is to prevent the elements from coming on and burning either the tops or the bottom of the loaves since they are so close to the elements (I bake 6 loaves at once). I do have one hot spot in one corner so I keep pots away from there. Lazy loafer is the one that told me about this technique and it works quite well when baking multiple loaves.

"This is a cautionary tale of how recipes fail, traveling from book, to kitchen, to dough, to oven. With a sprinkling of salt along the way."

In this article, Prof. Blonder showed that how different heating elements in the bottom (exposed vs unexposed) affect the texture of crumbs and crusts, as well as the effect from the added salt.

When turning down the temperature, two different home ovens can vary by a factor of 2x in cool-down time.

He used a bagel recipe to demonstrate these effects. He also gave some suggestions how to "outsmart" the oven's auto settings.

Regarding the effect of salt: "It turns out salt adds flavor, but in case of proteins, also changes how much water the protein absorbs, and if the protein remains flexible."

Another factor is the water's PH: "Acidic liquids, such as lime juice or lactic acid in sourdough, will not easily penetrate the gluten network, while basic liquids (such as baking soda) flow in quickly."

"By comparison, even salty, acidic tap water excels at hydrating gluten, and thus requires less time for the batter to rest to reach moisture equilibrium."

Actually, I have been wanting to discuss about his test on when to add salt during the mixing, but it should be on a separated post.

L.M./Lievito Madre - dry up and re-start for the...
Hi!
Bacon Bagels
Utilizing the sun?
Divide dough, but not "shape" it
END_OF_DOCUMENT_TOKEN_TO_BE_REPLACED