Recently, I baked some cardamom bread for friends, and I had a bunch of extra flour and yeast to use up. I haven't been baking for a while and I'm in college, so I left my starter at home.

There was one caveat, though: I always, always bake with whole grains as a portion of my flour, and I only had white flour from the cardamom bread! So, I decided to see what small bags of whole grain flour the supermarket nearby carried. I almost picked up some nice, locally milled rye, but I noticed a bag of Bob's Red Mill spelt nearby. I've been wanting to try baking with spelt for a long time, and this bag was smaller, so I decided to give it a shot.

Having heard about the extensibility of spelt, I decided to do a biga instead of the poolish I normally would for a yeasted bread. I normally preferment ~70% of the flour (including all whole grain flour), but having seen this great recipie, I decided to give a try to prefermenting 90% of my flour. To really get an idea of the flavor that spelt brings, I made 40% of my flour spelt.

That left the formula as follows:

I ended up upping the water a bit because the biga was really, really hard to get cohesive without it, so my final dough was probably 74% hydration or so.

I'm very, very satisfied with how it came out -- the flavor is wonderful: wheaty and sweet in the crumb, and assertively wheaty in the crust and the crumb came out relatively open and shiny and translucent, with the right amount of chew. I'm a bit disappointed with the crust -- it's wonderful tasting, but it's a bit thick and didn't brown as much as I'd've liked, but the ovens in the dorms really suck and are hard to steam properly: I had residual steam in there for about 7 or 8 minutes longer than I wanted. Fortunately, the crust isn't leathery: it shatters wonderfully. The loaves were a bit underproofed, but still had great oven spring! 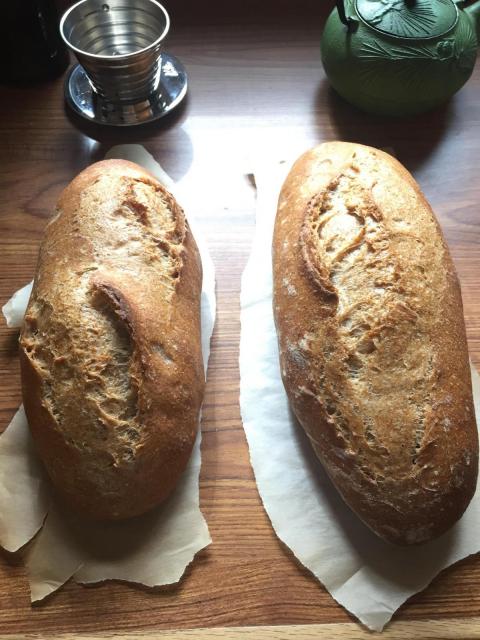 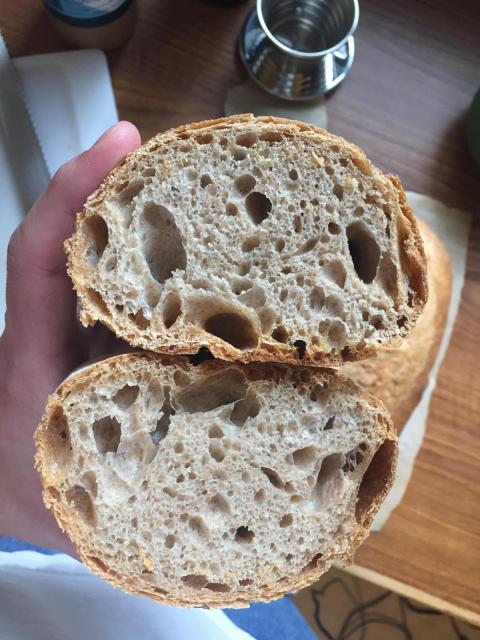 Lost recipies in Hamelman's "Bread"
The Bread Loaf Volumeter
WATTS of a Mixer
L.M./Lievito Madre - dry up and re-start for the...
Hi!
END_OF_DOCUMENT_TOKEN_TO_BE_REPLACED