Since the facility to accept text from Word documents is not yet implemented here, the text of this post can be found at this link.  The figure below is notional but while it does not reflect lab measurements, it should be thought of as an aid to thinking about the underlying issues. 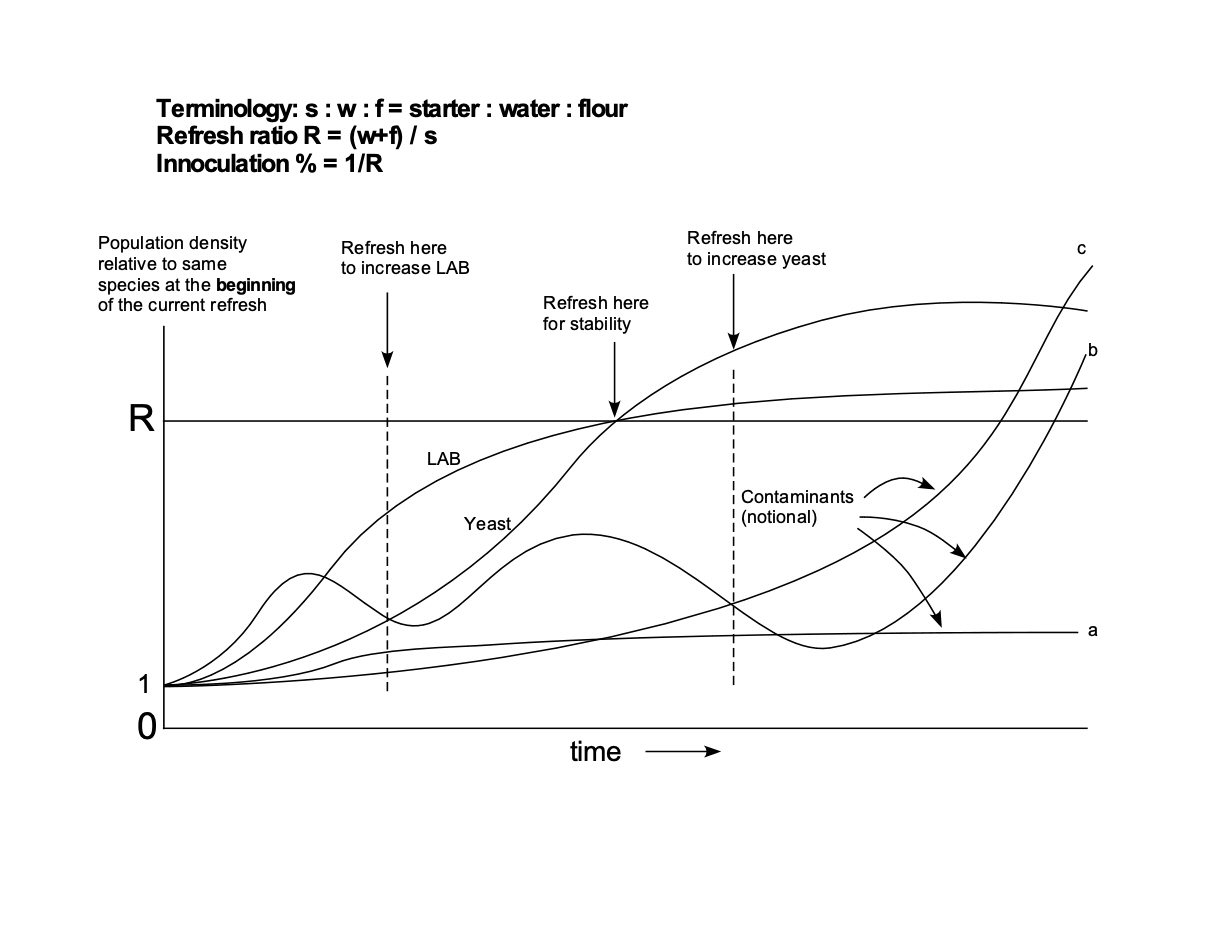 Perhaps this is a stupid question...and I did look at the link just to see...

But which is A, B and C??   Laugh if you must....but I didn't sleep tonight, which is why I am here reading...and it seems I need that info to understand your graph.  I *think* it is in the document...but not sure if I understand it.   LOL!   I am particularly interested in which one is salmonella for a nerdy reason.

But for any species that does not return to the pre-refresh population density, your primary species has gained a numerical advantage.  This goes on for every refresh cycle. And you don't know what is going on in your starter.  So it is a good idea to use exactly the same refresh process every time, because that is the only thing that assures that your starter remains stable.  In fact that is a little bit of overstatement since the flour always brings some contaminants to the mix, but you still don't want to amplify them.  Stability is defined by consistent refresh cycles.  Anything you do moves you to a new starter with a different vector of species populations. If your starter and refresh process are not compatible, then your starter is not stable.  A more stable starter will remain close to the original species vector over a wider range of variations in your refresh process.

I suspect that most starters are pretty stable (in the sense that small perturbations in the refresh cycle don't allow any contaminant species to out replicate any of the primary species) and thus tolerate some level of abuse.  But if you allow a contaminant to get out of control, you have no path back to where you started.  If that happens, the best advice I know of comes from Mini Oven: –– to switch to a 5:10:15 refresh at room temperature and repeat when if falls back. And if that doesn't work, start over.

Thank you.  My concern really wasn't so much controlling the contaminants... for I've been surviving sourdough starters for 50+ years...without much of a problem at all.

My curiosity was due to my interest in microbiology and how those contaminants are controlled by the acid environment.  For example...recent recall of flour due to Salmonella.  I wondered IF someone used such flour...and over long period of time of refreshing...IF the Salmonella bacterial load increased or stayed stable.  Not a personal concern of mine for I don't use that recalled flour...

I just was wondering, in my way,  IF "A" was salmonella...vs "B" being Ecoli...vs..."C" as coliform... (as an example based on your document and my assumptions) then one could perhaps say that salmonella was NOT multiplying in the acid environment.

I suppose all is moot since if you bake it...and it tastes good and you survive...all is well with the world.  As long as your washing your hands and equipment then "raw" sourdough shouldn't be a risk.  But I have to talk to my granddaughter about her tasting raw bread dough...despite my warning her in the past.

I understand why one wants one or the other level to keep their starter where they want it.  Your graph just got me wondering and I am an analyser personality...and my greatest need is to know why "C" stays stable.  LOL!

So long as the cyclic gain is less than 1.0, then population density at the end of the refresh cycle is lower than it was in the seed, and the contaminant is becoming less of a problem with each refresh. While there are salmonella varieties that are acid tolerant, they don't originate in wheat and are rarely an issue except when a batch of flour gets contaminated from an external source.  But if it didn't kill you the first time, it probably won't kill you after that either if the population density is going down every time you refresh. Use clean containers, potable water, and good quality flour, and refresh often and your starter should outrun any contaminant.  If the net population density reduction per cycle is 0.5, and you refresh twice each day for three months, you have (0.5)^180 or 10E-55 of the original contamination level.  So ten days at two refreshes a day would be more than you would need if this model is accurate (which it is not).

I was just curious.  I don't eat raw dough...but I just watched another video of a guy tasting his sourdough starter...LOL!  Makes me crazy when people do that...but I'm a little OCD I guess.

The document linked to in the text of your initial post is missing.  Do you still have it?

Thanks for pointing out the breakage.  I suspect Dropbox or Bitly did something as the file is still on my laptop.

That's an interesting post and a good argument for consistency.  The "refresh here to increase LAB/yeast" comments caught my eye.  I have read discussions about using short refreshment cycles as a mechanism to exploit the shorter yeast lag phase (relative to LAB) in order to give the yeast an advantage (relative to initial populations), although I have not seen any heuristics or rules of thumb to help guide such a decision.  I also recall discussions about the self-limiting nature of LAB, due to their intolerance (relative to yeast) to their own acid byproducts, which presumably explains their earlier plateau in this graph.  Perhaps there is an initial yeast advantage due to the lag phase, which is eventually lost and then regained after the plateau (albeit with increased acid load)?  I realize the complex and yes-but-it-depends nature of these complex biological systems can make such graphs controversial, but I am curious about your thoughts on this.

I am not sure whether there is a lag phase when you feed a mature starter.  As I understand it, during lag phase the microorganisms are building the machinery they need to grow and reproduce (divide) and that takes time and consumes resources. Growth rate suffers some because a new tranche of flour raises the pH which impacts that pH sensitive aspects of growth.  LAB seem to have an optimum pH of around 5.5 as I remember (you can read all about it in Michael Gänzle's dissertation) and yeast has its own proclivities but as the pH drops close to 3.8 the LAB reproduction slows down (and eventually stops) while the acid production continues for quite some time while the yeast consumes sugars to exhaustion. I find it interesting that some heterofermentative LAB cleave a maltose molecule, consume one glucose and release the other one into the dough thus providing a source of survival nutrients for the yeast after they have substantially depleted the residual sugars and their reproduction rate slowed (and/or during extended storage at low temperature).

When I was set up to run TTA measurements, I collected data over long periods of time, recording pH, and TTA and showed that TTA continues to climb while the pH stabilizes.  But those are difficult measurements to make manually and consistently get three digit accuracy and I had to do it every day for a week to get to the point where I could maintain that kind of consistency (the test was to make three sequential measurements and have them all agree to within ±2 in the third significant digit). But the data was good enough to convince me that acid production continues well after the pH has stabilized.  Weight loss was used to measure CO2 production and thus infer yeast activity.

The point of the paper was to explore in a rigorous mathematical way what is going on when you define stability as I did and allow for contaminants to have behaviors that differ from the yeast and LAB.  If I am right about the LAB always growing first (because if it didn't then the yeast would always outgrow it and there would be no stability) then the fact that the population density (scaled) crosses over at some point during the growth process is a characteristic of the stable coexistence of the LAB and yeast.  It also allows for external factors to impact the relative growth rates of contaminants and under some circumstances allow them to become dominant.  This gives you a lot of degrees of freedom to explore contamination mechanisms and also explains the fact that sourdough cultures in the hands of a baker will be very stable over very long periods of time because the process makes it so.

I hope that is helpful.

Thanks for the detailed explanation.